The floodgates opened as soon as the Court of Arbitration for Sport overturned Chelsea‘s registration ban. Since then the reported targets have flowed, and Real Madrid misfit Isco is just the latest.

Having defied all expectation in the first half of the season to keep the Blues in the battle for Champions League football, this is a bonus for Frank Lampard. He had expected to wait until the summer to be able to make his first signing as manager.

But having been denied the opportunity to add to his squad upon taking over, the club's all-time top scorer will be allowed to sign players in the January transfer window, which presents him with a tricky and sensitive situation.

The former Derby County boss has been all about promoting the club's own talent. One suspects that would have been the case even if the West Londoners had been able to sign players from the get-go. In that respect, Lampard has been more than vindicated. 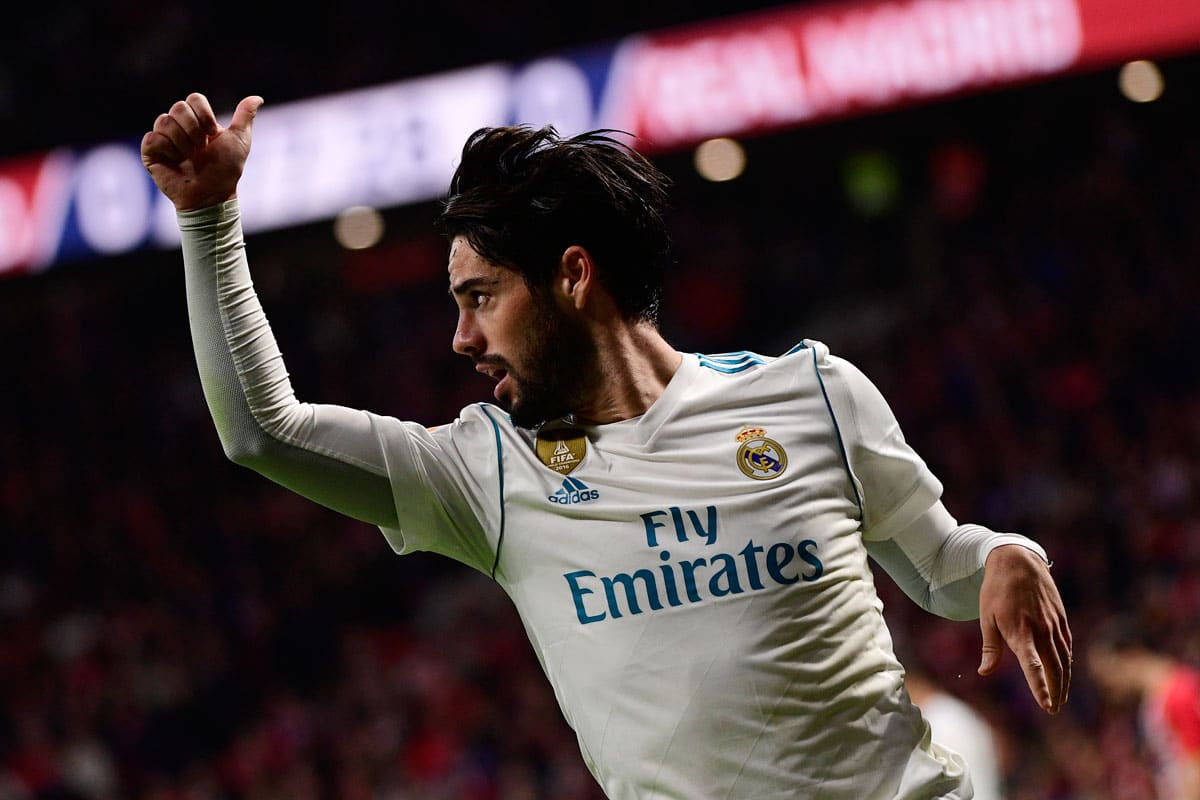 Regardless, there are still one or two areas of this Chelsea squad which would benefit from some strengthening. One of the most pressing is left-back, where Marcos Alonso has failed to build on his early season form, while Emerson is wanted by Juventus.

A forward of some kind seems to be another area under consideration, if you believe what you read in the papers. Wilfried Zaha remains a Chelsea transfer target, while Victor Osimhen is another frontman who has been linked. But that seems harsh on the players who have stepped up this season – Tammy Abraham, Christian Pulisic and Willian, who is proving you can teach an old dog new tricks.

One area where most regular Blues watchers would agree an upgrade is needed, however, is in midfield. Jorginho is showing why Maurizio Sarri thought so highly of him while Mateo Kovačić has finally developed into the player Chelsea thought they were getting from midfield. What they could do with, though, is a creator; someone who can break lines and unlock defences.

According to reports by El Desmarque, the Blues have already offered €52million for the 27-year-old playmaker. Real Madrid are yet to decide whether or not to accept the offer. The money would come in handy for someone who is essentially a squad player – even if Isco has forced his way back into Zinedine Zidane's thinking of late. 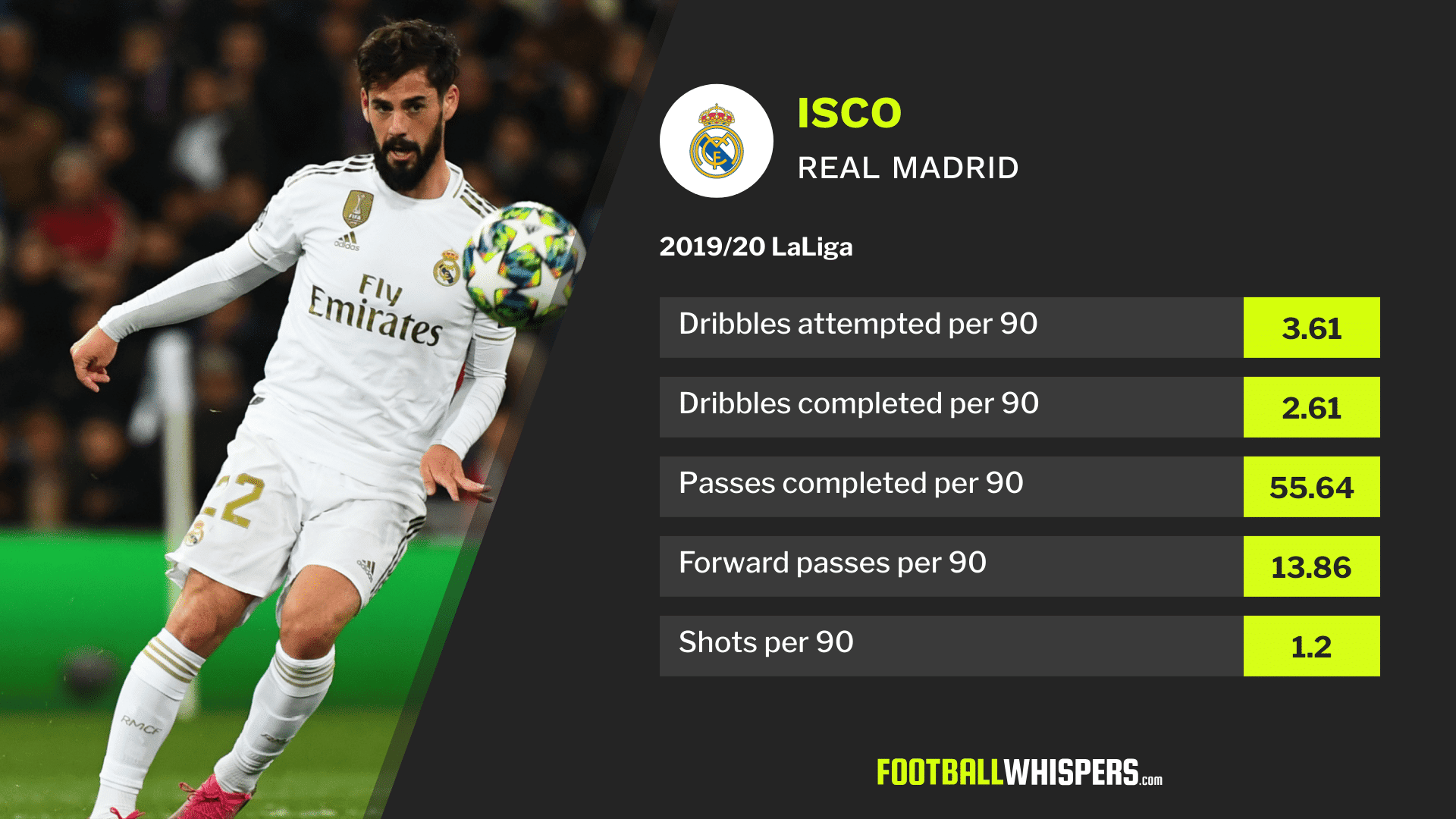 The Spanish international has played in just 448 minutes in LaLiga this season, with Zidane's preferred 4-3-3 system not catering for a No.10. While Chelsea have played the same shape more often than any other formation this season, Lampard has regularly switched to a 4-2-3-1 which would be ideal for Isco to play in behind Abraham.

However, even in a 4-3-3 Chelsea lack someone who can unpick the lock, particularly when smaller, less ambitious sides decide to sit back in a low block and invite pressure onto them. Isco could play either on the left of the midfield three, almost like Philippe Coutinho did in his final months at Liverpool, or further forward flanking Abraham.

Let's address the elephant in the room: It's been a while since we saw the very best of Isco. He's yet to score or assist this season and managed just three strikes and two set-ups in the previous campaign – albeit in just 11 LaLiga starts.

The season prior, Isco was every bit as devastating, as Zidane's side retained the Champions League. He scored ten times in LaLiga and recorded eight assists. Again, his expected goal contribution (0.48) was among the best in his position in the league, while he had an xA total of 0.22 per 90 and an xG per 90 of 0.25.

But with a plethora of players competing to either be the creative fulcrum in midfield or play to Karim Benzema's left at the Santiago Bernabéu, Isco's chances have been restricted.  For a player who oozes his class, it is a pitiful waste.

At his best, Isco is a joy to watch; every touch purposeful and precise, caressing the ball as if he were wearing slippers, while shifting through the midfield traffic to supply the bullets for those ahead of him.

Even in spite of his lack of action this season, the former Malaga maestro ranks tenth among LaLiga midfielders for completed dribbles, with 2.61 from an attempted 3.61. Crucially, he's also 11th for touches in the opposition's box (3.61) and second for on-target efforts (1.2).

Chelsea need someone who can either thread the needle for those at the top of the field or take matters into their own hands. Isco is capable of both – a true difference-maker.