One of the running themes throughout much of José Mourinho’s maiden season as Manchester United manager has been his systemic struggles. In a bid to figure out his best combination of players, the Portuguese has tweaked his formation on a number of occasions, frequently varying between 4-3-3 and 4-2-3-1 with the infrequent switch to a back six for clashes with more esteemed opposition.

Over the course of the campaign, it has become clear that the 4-3-3 is the team’s best system. This shape gets the best out of Paul Pogba, who thrived in a midfield trio during his time with Juventus, and is – in the eyes of many – Manchester United’s most influential player. When the Frenchman is lined up alongside Ander Herrera and Michael Carrick, Mourinho’s side tend to have a greater chance of success.

The triumvirate have started together in Premier League action on just nine occasions this term. However, in those nine games, Manchester United have been undefeated, winning five, drawing four and keeping four clean sheets. If this form were extrapolated over their 29 league fixtures they would have won two more games, have a significantly better goal difference and would be sat in third on 61 points. Crucially, they would be in a title race, as opposed to lying sixth on 54 points and fighting for a place in the top four. 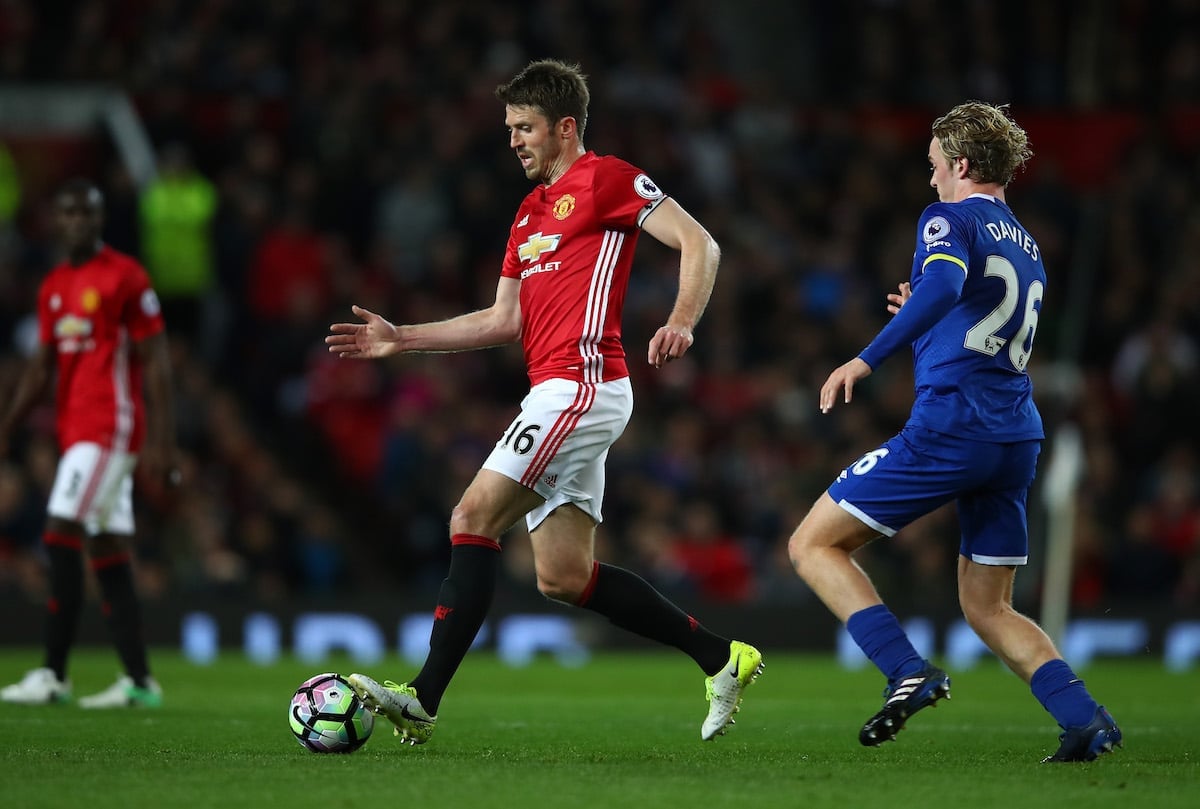 When Pogba and Herrera are joined by Carrick in midfield Manchester United have more balance. Pogba’s instincts are to drive beyond the opposition’s midfield and attack their defensive line. But in a midfield two this action leaves the team exposed. Carrick’s introduction provides greater coverage, freeing up those in front of him and facilitating Pogba’s forward runs.

While he restores balance to the side, Carrick is also a gifted passer of the ball. This is shown by the fact that only Juan Mata, Chris Smalling and Phil Jones have a higher pass success percentage than the 35-year-old, and all three have attempted far fewer passes.

Put simply, Manchester United are a more cohesive force with Carrick at the base of their midfield. However, they may not be able to call upon the Englishman’s services for much longer. While it has been reported that his contract – which is currently set to expire this summer – will be extended, at 35 it is unclear how long Carrick has left at the highest level. Sooner rather than later, Mourinho must look to replace him.

Wilfred Ndidi's scored the goal of the season in Belgium in 2016. Another screamer. #lcfc (🎥 Pro League) pic.twitter.com/LEjBIa7l4w

And when that time comes, it would be reasonable to expect a complete change in tack. Recently, Leicester City's Wilfred Ndidi has been linked with a move to Manchester United. If the deal were to take place, it would have some historic precedent.

Football Whispers colleague Ryan Baldi recently highlighted the type of defensive midfielder often utilised by Mourinho throughout his managerial career. Carrick doesn’t fit in this particular picture – but Ndidi would.

Costinha was used at the heart of Mourinho’s midfield at Porto. A strong tackler and an intelligent enforcer, the Portuguese was a key player as Porto won the Champions League in 2004. After joining Chelsea, Mourinho opted to build his team around the quiet harrying and unfussy distribution of Claude Makelele. At Inter Milan, Esteban Cambiasso did a similar job.

During his time in charge of Real Madrid, Mourinho mixed it up in midfield on a frequent basis. He used Lassana Diarra and natural centre-back Pepe as defensive barriers at times, though he also used 4-2-3-1 more than he had done previously. This was done to accommodate the presence of one of the team’s star players, Xabi Alonso, a deep-lying playmaker who had finesse but perhaps lacked the physical strength and defensive nous of Costinha, Makelele and Cambiasso. To account for this, the energetic Sami Khedira was often paired with Alonso. 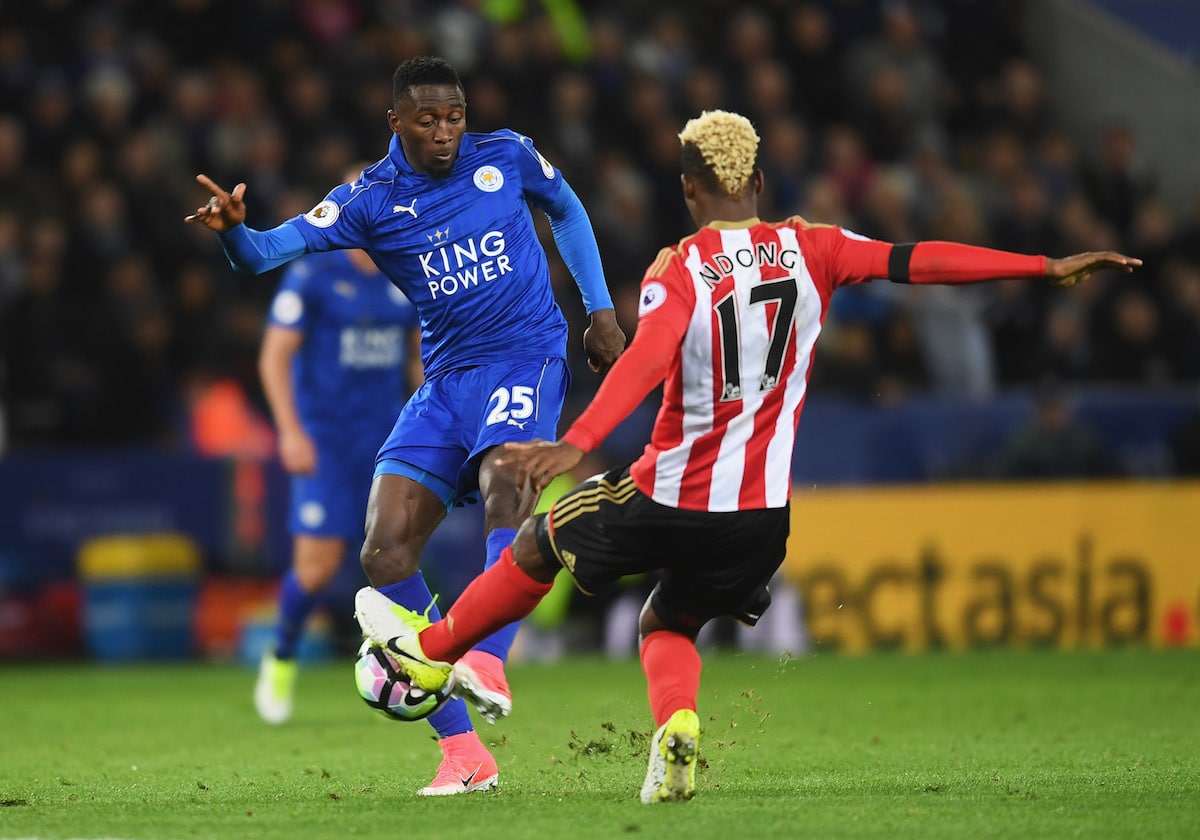 In Leicester’s desperate attempts to find a replacement for N’Golo Kante they appear to have found a long-term solution in Ndidi. This in itself should explain the profile of the player: he’s a relentless defensive midfielder with a specifically high capacity for winning possession through tackles and interceptions.

Physically and athletically, Ndidi has the raw attributes necessary to prove a solid ball winner. But it is his positioning, pressing and sound coverage that truly enables him to protect his defence effectively. If he joined Manchester United he would provide the same traits in a midfield that lacks an out-and-out aggressor.

Pogba is better suited to a forward-thinking role, while Carrick prefers to dictate possession from deep. Herrera is the closest thing Mourinho has to a ball-winner at present, but the Spaniard is not as astute as Ndidi.

However, replacing Carrick with Ndidi would represent a considerable tactical shift.

Defensively, Ndidi’s presence would offer greater protection to the back four. Since joining Leicester, the Nigerian has attempted an average of 6.47 tackles per game. That’s four more per 90 minutes than Carrick. He has also won more than Carrick – 2.94 to 0.79 per 90 minutes – and has a higher tackle success rate of 39.1 per cent compared to Carrick’s 32.2 per cent.

Ndidi is also stronger in the air, having won 4.14 of his aerial duels per 90 minutes since arriving in the Premier League, a record that is substantially better than Carrick’s 0.71 per 90 minutes.

Carrick may make slightly more interceptions but Ndidi is the more consistently reliable defensive operator of the two. However, he is comparatively limited from a technical standpoint with Carrick having a far higher pass completion rate – 89 per cent to Ndidi’s 74 per cent – as well as a higher amount of successful passes and chances created.

Manchester United’s midfield would look far more like a Mourinho midfield were Ndidi to replace Carrick in the starting lineup. Yet this would also have an impact on the team’s possession game, as the midfield would then lack a refined playmaker capable of playing passes through opposition pressure.

This could lead Mourinho to revert to the structure he used at Real Madrid, whereby he partner Ndidi with a more creative deep-lying midfielder. In turn, this could lead to the elimination of Herrera from the trident.

Man Utd Should Be Going All Out For Ousmane Dembélé

How Lindelöf Fits In At Man Utd

Is Van Dijk A Good Fit For Man Utd?

Is Raheem Sterling Turning Into A £49million Player For Manchester City?

Who is the better option for Everton – Virgil van Dijk or Chris Smalling?

Paul Walsh: football statistics can be misleading if not used properly