Southampton's Virgil van Dijk has become the most wanted defender in the Premier League after Manchester City joined Liverpool to become the latest team to be linked with the Dutch centre-back.

A key part of Claude Puel's early success at St. Mary's the former Celtic defender has now also been mentioned with Chelsea and Manchester United, as the top clubs in England all look to strengthen their back line this winter. It won't be cheap though – Liverpool know this all too well – as the Saints are not going to let one of their best players leave without a fight, or a huge transfer fee.

“It's just speculation, and I cannot participate with speculation,” the Saints boss responded when asked about the story. “All the players are in the club's project, and for this season it is important to continue this work with good spirit and this is true with all the players.

“It is just rumour and it's not important for me.”

It may not be important to Puel, but for the teams that are chasing him, Van Dijk is perhaps the most important defender in the Premier League. However, he's not the only option out there, but he is certainly one of the most impressive.

The 6 foot 4 tall Netherlands international has made 89 clearances this season in 1170 minutes. That's on average 6.8 per game, it may be 2.5 per game behind Michael Keane, but the Burnley centre-back outperforms nearly everyone else in the league.

It’s understandable that playing for a club like Burnley – no disrespect meant – that the 23-year-old has made 117 clearances this season. He is only four behind the league leader, Jan Vertonghen. However, what’s outstanding about the England international, is that he has only been forced to make nine tackles this season. 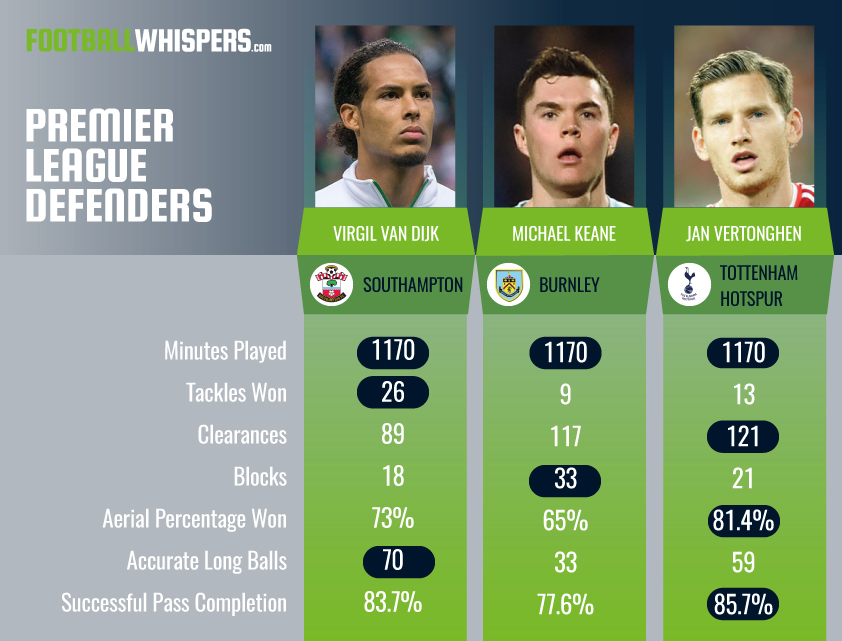 Compared to the 26 that the Dutchman has made, that's even better a return than Joel Matip, Jan Vertonghen and Laurent Koscielny. When looking all Premier League defenders – who have played more than five times this campaign – only Eric Dier – although also playing in midfield – Toby Alderweireld and John O’Shea have completed fewer tackles.

Vertonghen has made 13, Matip 15 and Koscielny 18. One of the reasons behind Van Dijk’s higher numbers is his athleticism. He’s perhaps one of the most mobile centre-backs in world football. He’ll use his speed to get out to the attackers, slide in – maybe a little too often – but then get up to recover with his pace a huge attribute.

I love pretty much everything about Virgil van Dijk #Saints pic.twitter.com/h8ME0zlqUm

That’s something the others offer, but not at the same level as the Dutch defender. He is extremely comfortable with the ball at his feet, an accomplished passer and a huge asset when put beside defenders that just want to defend.

Centre-backs, regardless of whether you are playing with two or three, it's all about partnerships and complementing each other’s skill-sets. Vertonghen and Alderweireld are a great example of this, even Ben Mee is enjoying an outstanding season beside Keane and Koscielny has already developed a terrific understanding with Shkodran Mustafi at Arsenal.

Gary Cahill and David Luiz are getting there, but Cesar Azpilicueta is not a natural in that role. Someone like Van Dijk would be perfect as the third centre-back in Antonio Conte's team.

No defender in the Premier League has won more balls in the air than the Dutchman, he is in the top 10 for clearances and is just one long ball behind Alderweireld in terms of completed passes.

In Manchester, as Pep Guardiola searches for a healthy replacement for Vincent Kompany, Jose Mourinho is struggling to find a partnership that can help Manchester United push up the table. Eric Bailly has started the most games in the heart of the defence, so you would assume that he is the first choice. For the Portuguese boss, the solidity and cool head that Michael Keane would bring may help the Ivorian more. Van Dijk would be an excellent signing, but the Englishman knows the club and would settle in quicker. 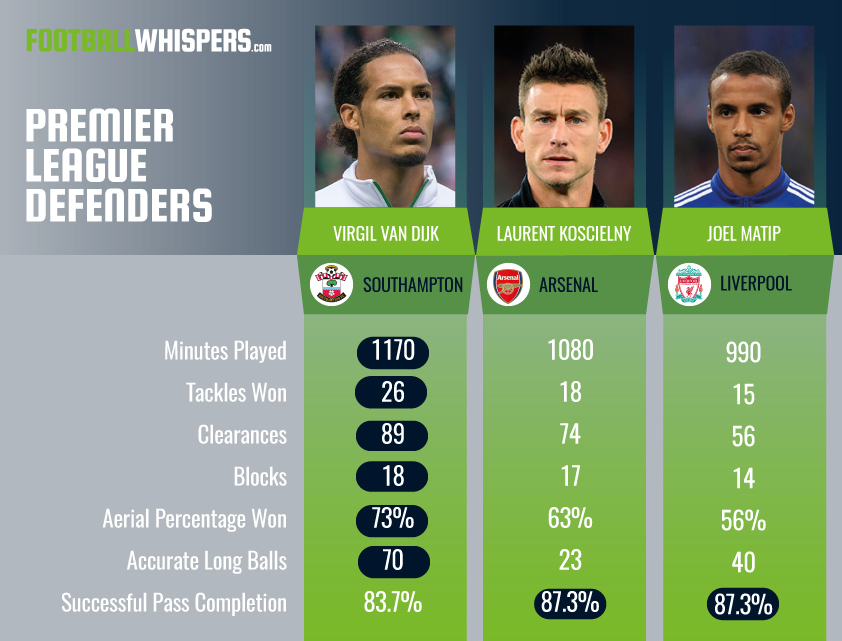 Over at Anfield, Jurgen Klopp has Joel Matip playing beside Dejan Lovren. The Cameroonian international is a perfect example of a coach keeping to what he knows. The German would have watched the 25-year-old at Schalke and knew exactly what he was getting.

To sign him on a free transfer, is one of the bargains of the summer. Yet, when you compare them, Van Dijk’s numbers swamp Matip’s in pretty much every category. The Dutchman has made more clearances, blocks and a higher percentage of aerial challenges. At Southampton, he also completes more long balls.

Van Dijk does make more tackles than Matip though, and as we recently discussed, more is not always better in this regard. You want your centre-back to read the game and look to intercept the danger or get in the right position for a well-timed clearance. The Liverpool defender does make fewer clearances and interceptions, but has made nine fewer tackles.

“It's always easier when you have the feeling with your partner and know each other,” Dejan Lovren told the official Liverpool website.

‘To be honest we've done it quite well, even in pre-season, [it was] really quick – I don't know why, maybe because he's speaking German and I'm speaking German, maybe that's the funny thing.”

Growing up in Holland, there is a very good chance that Matip and Van Dijk would be able to strike up a similar relationship without the language barrier.

The former Groningen defender has made an immediate impact wherever he’s played. From the Eredivisie to Celtic Park, he has then made the step up to the Premier League almost effortlessly and as is with most Saints players, the vultures are circling to take him away from the south coast.

The partnership of Matip and Van Dijk is a mouth-watering prospect and if Klopp could convince the Dutchman to leave Southampton this season, it is the sort of move that could take Liverpool all the way to the title.