With the club said to be targeting three or four new signings, one of which is believed to be a central defender, reports broke recently about who it could be. According to Sky Sports, the three-man shortlist is made up of former United player and academy graduate Michael Keane, now at Burnley, Southampton‘s Virgil van Dijk, and Benfica's Victor Lindelöf.

Keane and Lindelöf have been linked for some time, but van Dijk's name has only just seriously come into the discussion as far as the Red Devils are concerned. Prior to these reports, Liverpool were said to be targeting him.

That said, how would the Dutchman improve United's defence?

A Good Match For Mourinho

For one thing, the Portuguese tactician likes tall, strong players in his team. Standing at 6ft 4ins tall, the Dutch international would certainly be a formidable presence in his own penalty box when defending set-pieces and long balls as well as in the opposition's penalty box when attacking set-pieces.

In line with that, prior to getting injured in the Saints' 3-0 home win over Leicester City, the 25-year-old ranked first among defenders and fifth overall in the league for aerial duels won with 96, giving him a win percentage of 75.

He should thus help boost United's productivity going forward, as the Manchester-based side scored just four times from corners and twice from crossed free-kicks – figures that are among the lowest in the league.

Van Dijk is also a very good reader of the game. He has no problem stepping up from the defensive line to try and intercept a pass. Prior to getting injured, he ranked sixth in the league among defenders for interceptions made, with 56. Of the five defenders above him, none are from United. 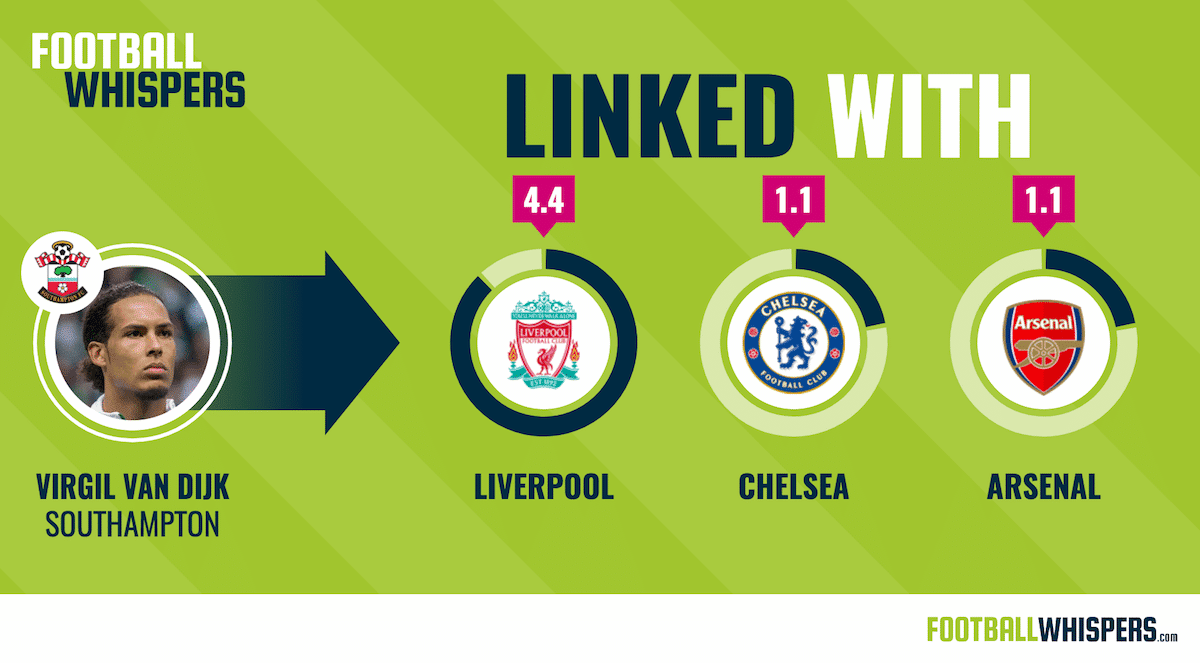 The Dutchman also made 140 clearances, putting him ninth among defenders. Again, no United player made more, although fellow United transfer target Keane ranks just above him in eighth, having made 159 clearances.

As for defensive errors, van Dijk made just one, which did not lead to a goal. Generally speaking, he has a high level of concentration, which his prospective manager Mourinho would undoubtedly appreciate, as when playing on the counter-attack – which has often been the case this season –  United spend long spells out of possession and need to keep focused in order to make sure the opposition doesn't find an opening. Having a high level of concentration also means that he can be trusted with man-marking assignments, which is also a huge plus.

When in possession, he is very comfortable, showing no signs of fear with the ball at his feet. He is capable of spreading the play quite nicely as well as picking a fine through ball for an advanced team-mate.

His pass completion rate prior to his injury stood at 84 per cent, which is decent when you consider the risks he takes with his passes. He can also take players on with ease when he sees fit, having completed all eight of his attempted take-ons.

Worth mentioning as well is van Dijk's leadership. Following José Fonte's transfer to West Ham United, the Dutchman was made club captain and has shown just how wise a decision that was, as he could regularly be seen talking to his team-mates on the pitch during games to motivate, wake up, as well as guide them.

Without question, van Dijk is a fantastic defender who would improve any team's defence. As far as United's are concerned, who conceded just 29 goals in the league this finished season and made the fewest errors (eight), the 25-year-old would take them another level.

Considering the Red Devils would be back in the Champions League next season, once again rubbing elbows with Europe's elite, they need to be at a high and consistent level to ensure that they stay in the competition.

One concern, however, is how van Dijk would return from his long-term injury. Surely, he would not come cheaply, with Southampton usually holding out for top dollar for their most prized assets.

In fact, £50million has been touted as a possible fee. So making such a big investment on a player who has a question mark over his fitness would represent a great risk, especially for a United side that cannot afford to get many more signings wrong. But van Dijk has a strong mentality, a strong character, and is very likely to return to top form in no time.

Keane is said to be the most likely defensive target to arrive at Old Trafford, but van Dijk shouldn't be quickly ruled out, even in spite of his injury. A complete defender who has settled very well in England, he is well worth signing.