For over the last 12 months, Sebastien Haller has been a transfer target for clubs all-around Europe. Norwich City and Swansea City tried last year, Ajax and Spurs have scouted the French centre-forward and now, according to the Daily Mail, Everton are ready to go back in next month.

Although Romelu Lukaku is set to sign a new deal to take him to around £100,000 a week, there’s no guarantee if he will still be at Goodison Park next season.

“It is a big deal and that is what the club is showing, to keep their best players and do everything to keep them in the club, because that is the future,” boss Ronald Koeman said after the win over Leicester City. “Of course you don't know in football what can happen in one year – but at least there is an understanding that the boy likes to stay and he is a big part of Everton's future.”

The Toffees need to plan for a future, both with and without the Belgian striker. That’s where Haller comes in. The 22-year-old moved to Holland in 2015 after coming through the youth ranks at the famed AJ Auxerre academy. Originally on loan, FC Utrecht made his deal permanent just seven months after he joined in the January window.

As a teenager in France, he showed promise, but the centre-forward exploded into life in the Netherlands. He has played 78 games for Utrecht and has scored 45 goals, adding a further seven assists. An amazing return for a young player moving away from his homeland.

This season, Haller has scored nine times, building on the 19 strikes he managed in the Eredivisie last term. Erik ten Hag plays a 4-4-2 diamond with the French Under-21 international partnering Richairo Zivkovic up top, with former Arsenal youngster Nacer Barazite in the No.10 role.

It’s a huge front-line, with Zivkovic standing at 187cm tall, just below Haller at 190cm, both just below Lukaku at 191. Any partnership between the current Everton forward and the 22-year-old would be a handful for any defence.

What makes it even more appealing is the style of Haller’s play. He’s not a target-man is the sense of Christian Benteke or Wilfried Bony. Despite his height, he runs the channels, he drops deep and he can run at defenders.

Bony makes on average 21.2 passes per game, even Lukaku is down at 25.2, with Benteke the most of the three, on 28.4 passes each game. Haller is averaging 36.2 and has three assists this season, compared to the five he made in each of the last two terms.

That element of his play was evident in the game against Heerenveen. In the opening five minutes, Haller used his presence, touch and vision to set up the opening goal. As you can see in the graphic below, he (yellow) comes short to receive the ball – normal centre-forward play. 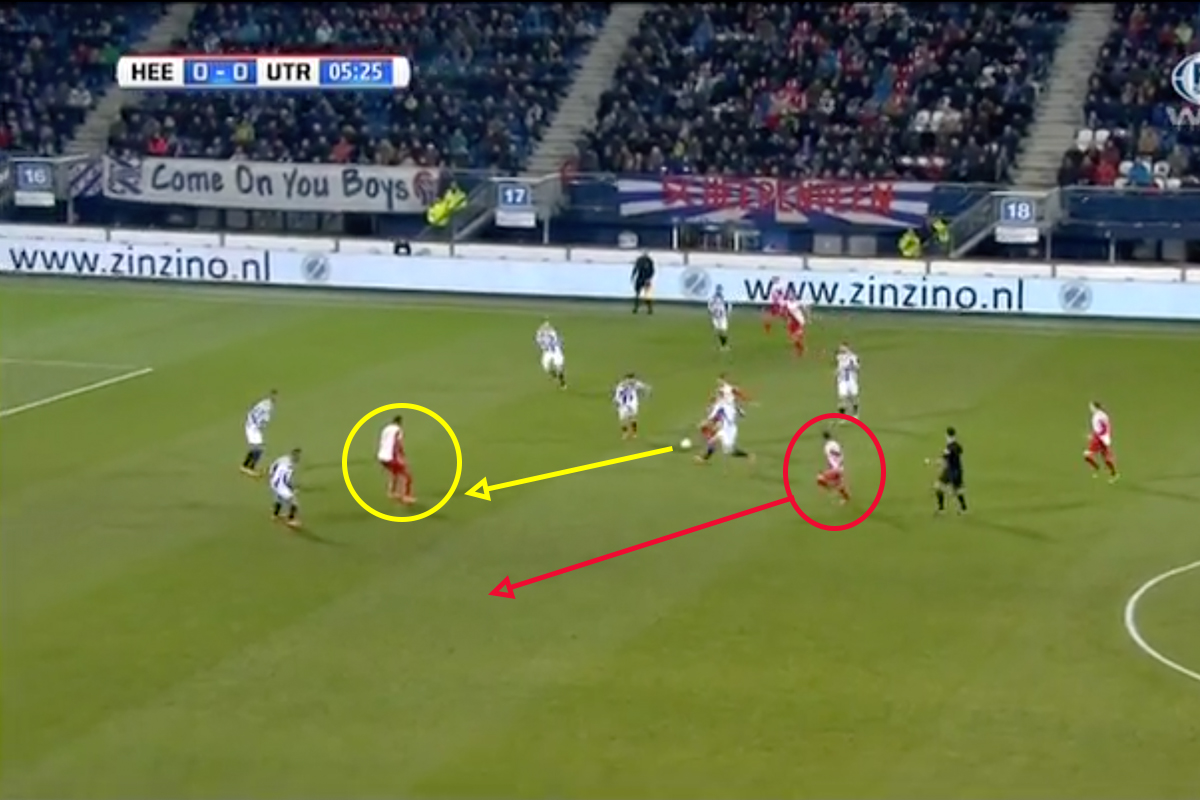 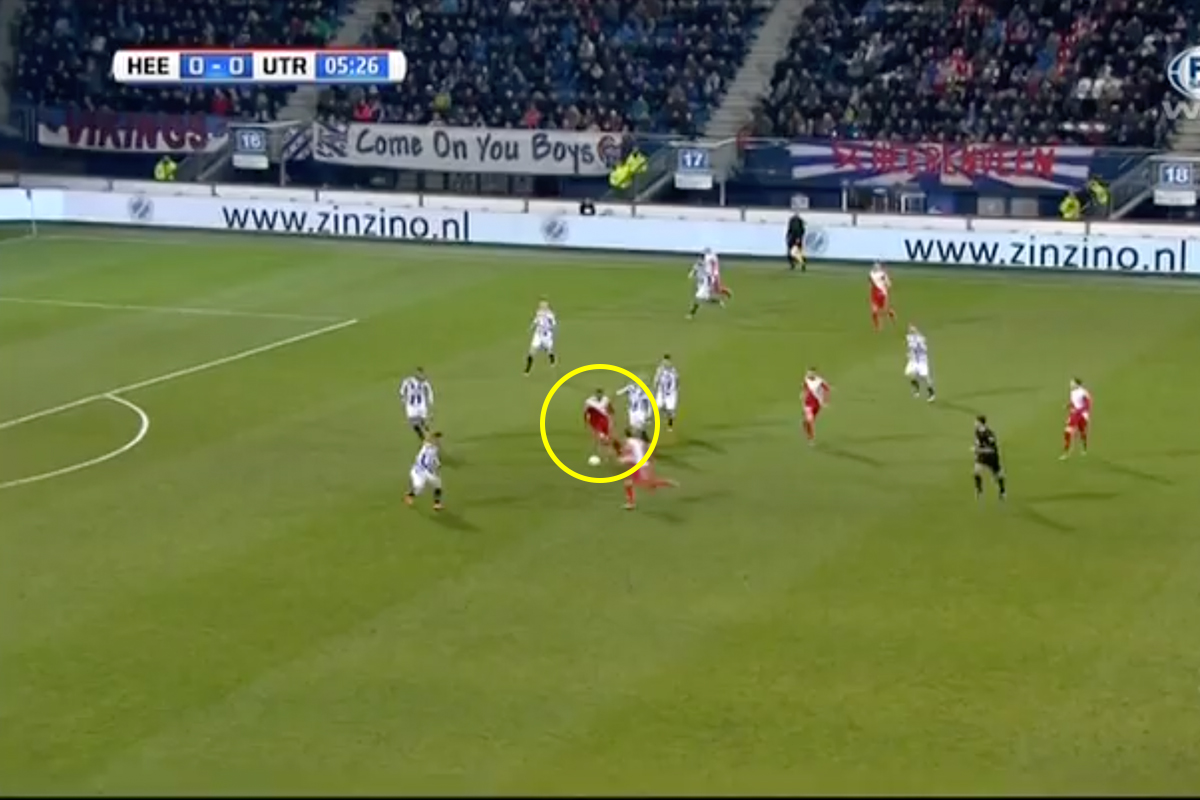 Andreas Ludwig is making a run down the left wing and the forward doesn’t hit him with the pass straight away, he waits. He could also have taken the easy option and turned on to his favoured right foot, but he is better than that. When the time is right he feeds the ball in between two defenders with the outside of his right foot and his team-mate is clean through on goal. 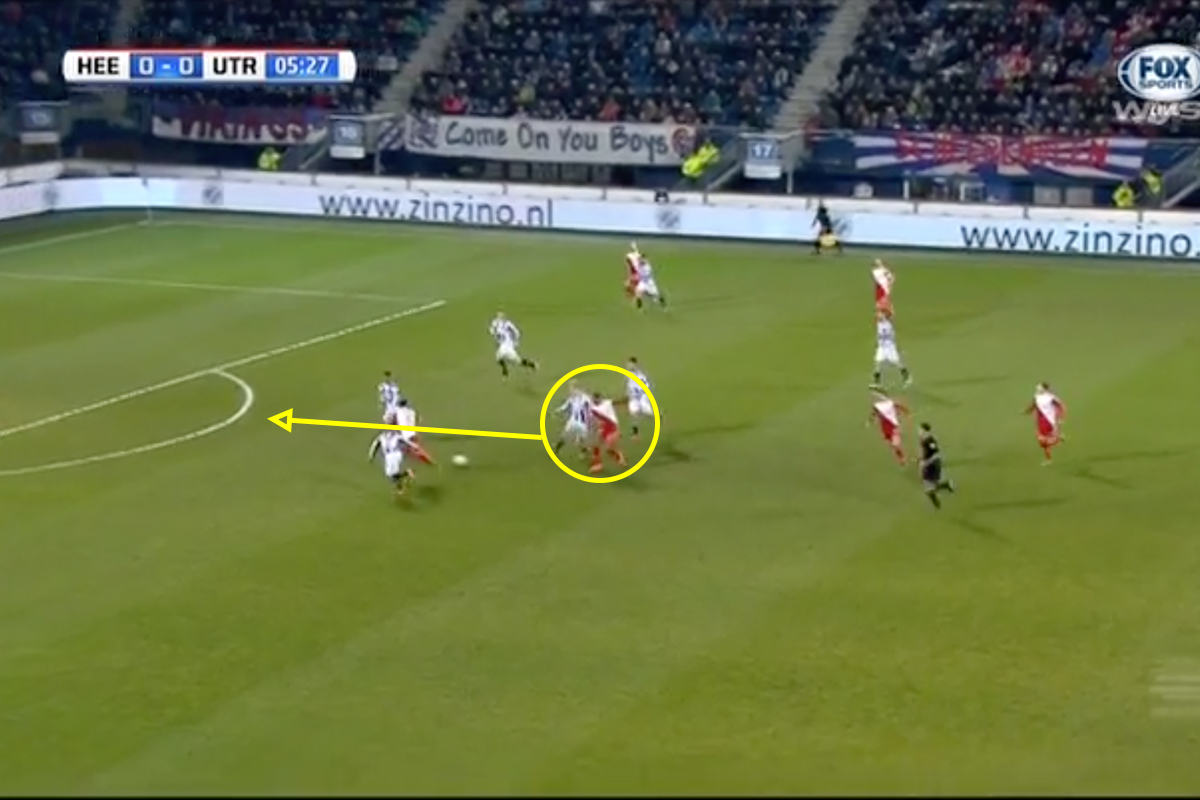 What is noticeable when Haller is on the ball, he never looks rushed. Everything is done in his own time, when the moment is right. That could change in the high-pressure world of the Premier League, but he’s adapted so far and looks technically gifted enough to make the step up once again.

Against Feyenoord recently – who are top of the table – Haller showed he is a player for the big occasion and it was the forward that helped give the home side the lead after just two minutes.

You can see from the graphic below that he (yellow) has dropped deep and a little wide to find some space. Barazite (red) collects the pass and turns to attack. Haller is deeper than the midfielder when the move starts, but quickly starts to motor. 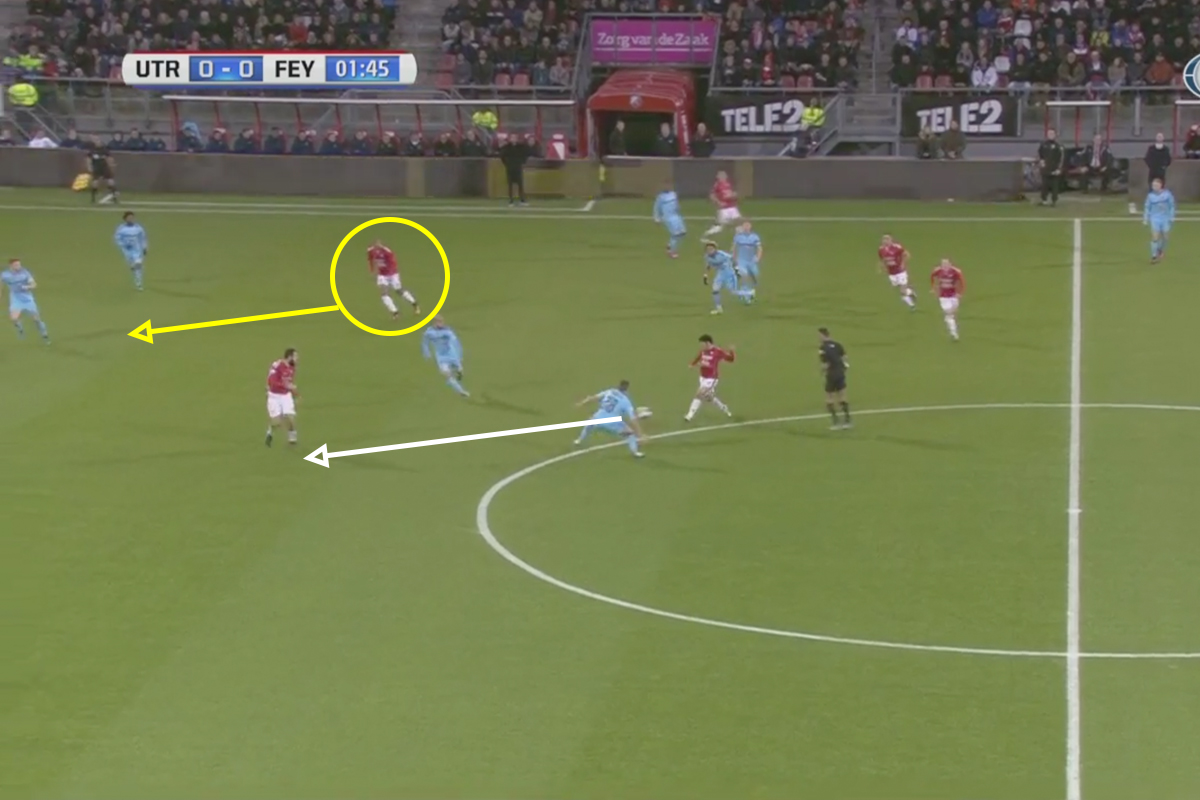 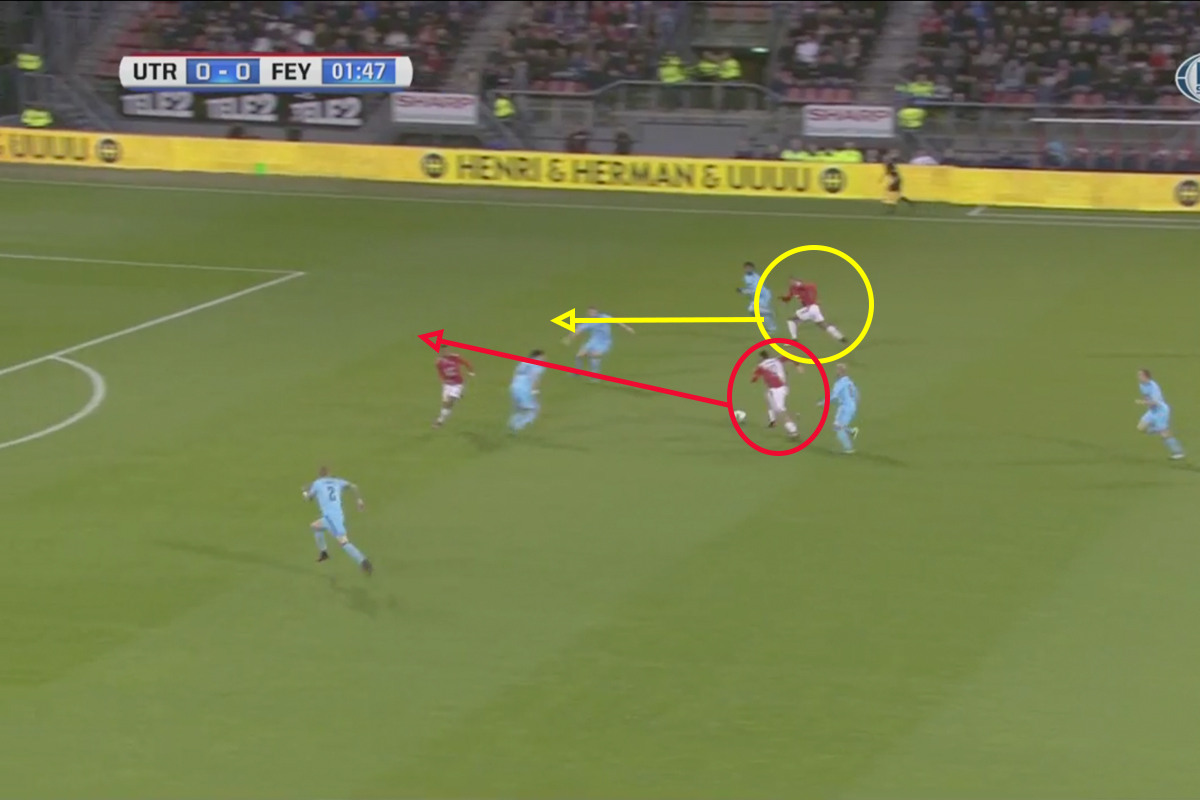 The two centre-backs are drawn to Zivkovic’s run and Haller times his perfectly. Playing on the blind-side, he runs straight past the back four and the pass is perfect. The centre-forward is calm and composed and tucks away the early chance.

A great example of his speed across the ground, his touch and finishing ability, as well as is reading of the game and timing.

Good in the air, he can also peel off the back post to get on the end of crosses. He has the strength to hold off defenders and the pace to stay in front. Against ADO Den Haag he showed superb athleticism, kneeing the ball into the air before unleashing a stunning overhead volley – one Peter Crouch would have been proud of.

His contract runs till 2019 and as that is still the original deal from when he signed, his wages shouldn’t be a problem. It is thought that he is still on a deal worth around £8,000 a week, with the highest earning players in the Eredivisie on around £42,000.

Everton could easily match that, but he’d still be below Aaron Lennon, James McCarthy and Tom Cleverley at £50,000 a week. Wages won’t be an issue for Ronald Koeman’s side, competition and convincing Utrecht to sell in January will be the biggest stumbling blocks.

Utrecht quoted €8 million in the summer, and Everton may need to double that to make it happen next month. However, again, for a Premier League team, that’s nothing and would work as part of the £50 million that the club plans on spending this season.

Next, they’d have to convince Haller that it was a move that could benefit him as a player and help him progress.

“That my name is mentioned indicates that I am doing well. It's not like I feel I'm too big for the Eredivisie,” Haller recently told the press. “But of course, I also hope to step to one of the five biggest leagues in Europe. I know what I want. That is not to join a beautiful club for a lot of money and then sit on the bench. I want to play.” 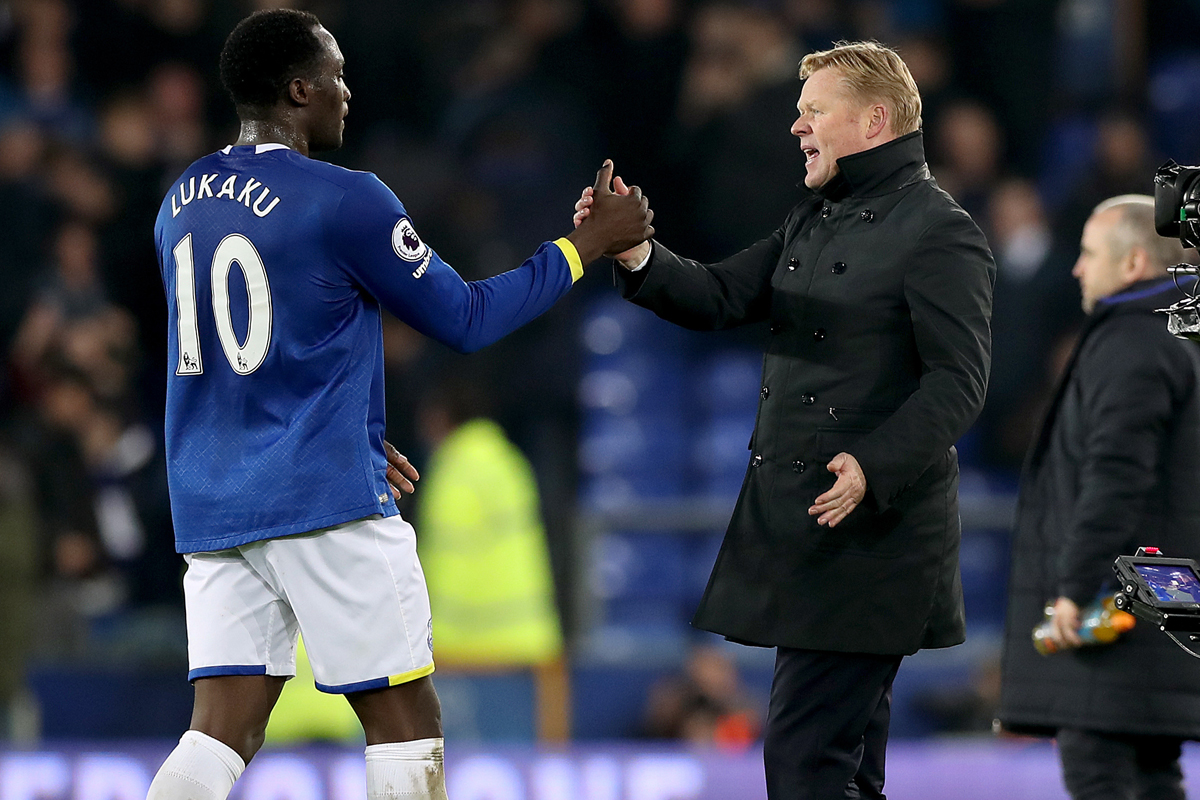 Playing against the Premier League champions, Koeman played 5-4-1, with Lennon and Kevin Mirallas flanking Lukaku. With the game level at the break, the former Southampton boss has words for his top striker:

“The message to him at half-time was to tell him that sometimes he runs too much (out wide) and that he needed to stay up front, stay between the two centre-backs because when we have crosses, he needs to be in the box.”

Lukaku would get his goal in the dying minutes, but there is scope for a partnership with Haller, one that would suit both attackers well. The Frenchman likes to drift and find space. He has the touch and passing ability to deliver crosses, or balls in behind to the Belgian and he is happy as a link man as well as an out and out striker.

That would give Everton another option, another dimension, something you need when you are trying to push higher up the table. There are a few clubs outside the top tier that are trying to make that leap. Haller looks like the perfect young player that would benefit from a move, and reward the Toffees for taking the plunge.

Despite a winless run of four games in all competitions following the restart of English football last month, only the harshest of critics would consider...