When it comes to signing strikers, no Premier League club in recent years has a chequered record quite like West Ham United. So let's recall a few of the clubs greatest misses.

You get the picture.

However, this summer the Irons did something rather rare. They spent big on a high-quality striker with a proven goalscoring record. Welcome to the party, Sébastien Haller.

He joined West Ham from Bundesliga side Eintracht Frankfurt for a reported £45million fee. In the process, he became the club's record signing.

“A lot of clubs pay that but for West Ham, it’s their biggest transfer so it really means something when they spend an amount like that,” Haller told the Irons' official website on the eve of the Premier League campaign.

“You know they really want to use you. They don’t say: ‘If you don’t perform after six months we will get you out.'”

The 25-year-old arrived at the London Stadium off the back of an exceptional campaign for Eintracht. Part of a devastating trio which also included Luka Jović, who joined Real Madrid, and Ante Rebić, who moved to Milan, Haller struck a career-best 20 goals and also created 12 for his team-mates.

The French forward could do it all. A goalscorer and creator in equal measure. Understandably, Manuel Pellegrini felt an immediate impact was likely.

He said: “It's never easy to change leagues. The Bundesliga is a top league but arriving in the Premier League is a big step. It's a new league, with better defenders and a new style, but I think if he continues working and playing as he did last season he will do well.”

And Haller delivered. In his first three Premier League games, he scored three goals, including a match-winning double at Watford. The Hammers also lost just once – to Manchester City – in the striker's first six starts.

Yet as the weeks have progressed, Haller's influence on the West Ham side has waned. He has just one goal and one assist since the start of September and West Ham are winless in four.

“I think that he is not doing bad but I think he can do better also,” said Pellegrini prior to the 1-1 draw with Sheffield United at the end of October. 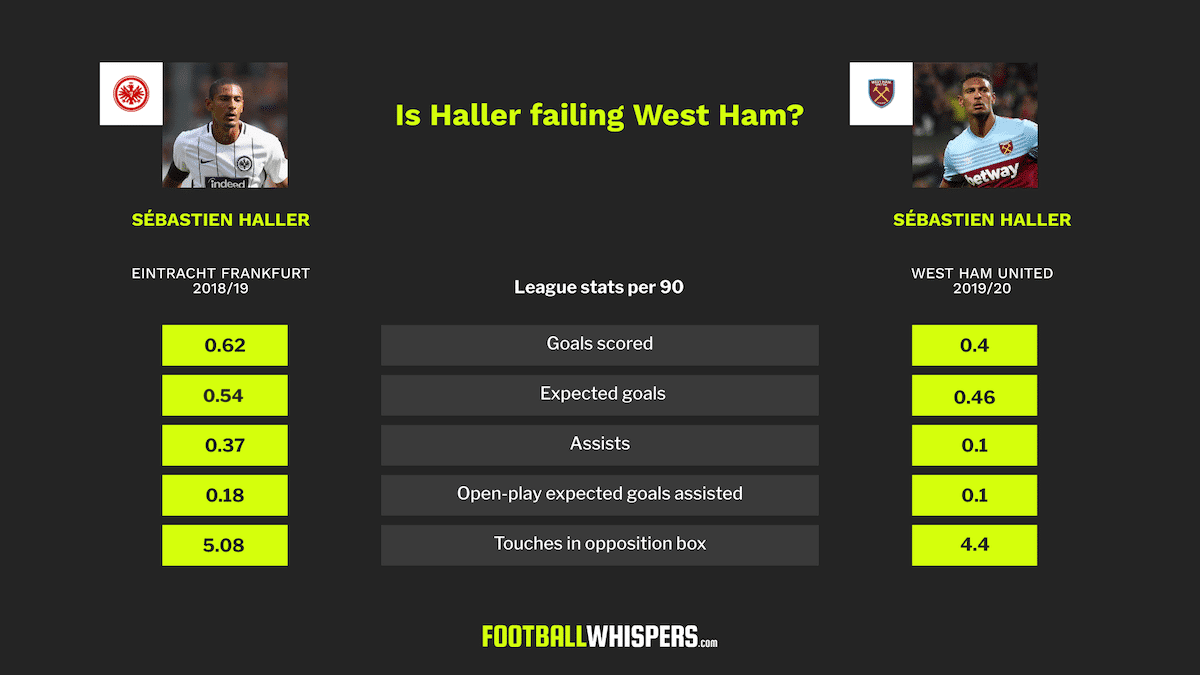 Yet is that a fair assessment? Is Haller failing West Ham or is the reality that West Ham are failing Haller? The above graphic – created using the Football Whispers‘ toolbox – compares the forward's league output from his final season with Eintracht and his early Premier League games with the Irons.

What immediately stands out is Haller's expected goals per 90 is not dramatically different this season than last. It suggests the Frenchman is being provided with high-quality chances at the London Stadium and that he simply isn't as clinical as in 2018/19.

And yet that isn't actually the case. If you look into the deeper numbers of Haller's season, then West Ham's win against Watford skews the numbers significantly.

Haller scored twice at Vicarage Road to guide the Irons to a 3-1 victory. In the process, he racked up an expected goals total of 1.97. Remove that match from the equation and Haller's xG per 90 drops to 0.3, a significant decrease on the 0.54 he posted at Eintracht.

So, barring one game against Watford, the striker hasn't been served up chance after chance by his team-mates. And he has averaged just 1.20 shots on target per 90 this term, a figure bettered by 27 Premier League strikers.

“He has started better maybe than we expected,” Pellegrini admitted at the end of October. “Now he must make more movements in the box for the way we play because we need to score more goals.”

The West Ham head coach's assertion that Haller needs to do more in the penalty area is a strange one. As the striker's shot map below highlights, he predominantly shoots only when within the width goalposts. 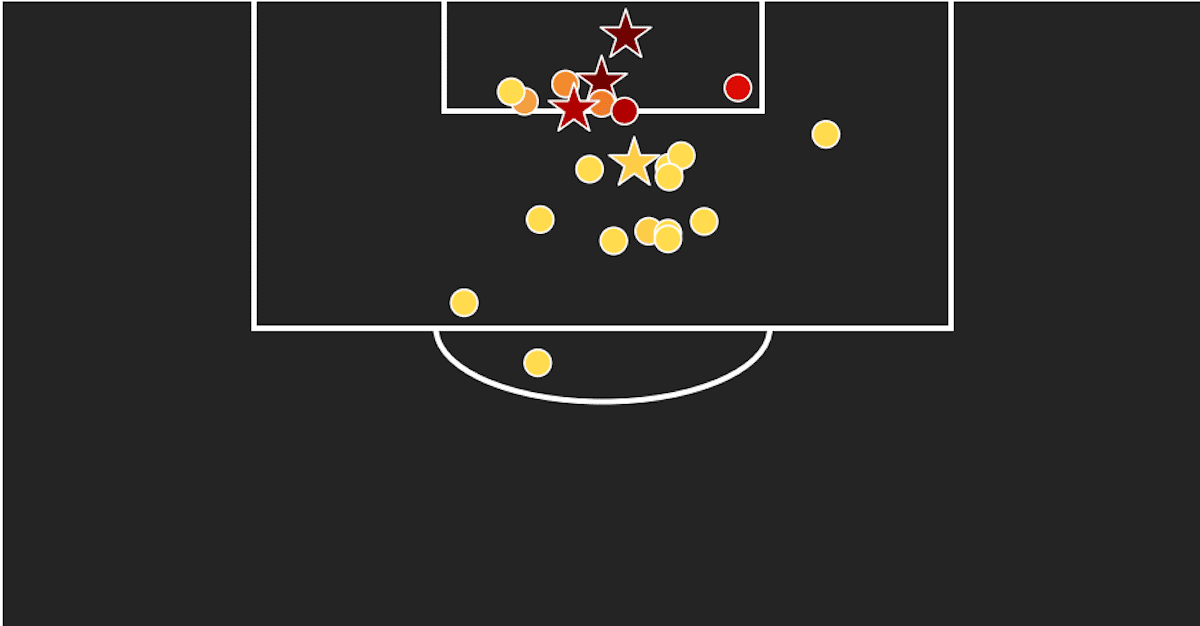 It was the same story in Germany. Last season Haller only took two shots from outside of the penalty area; he was intelligent and prepared to wait for the right opportunity instead of taking wild efforts from distance.

Eintracht's front three enable such consideration. In Jović the Bundesliga side had a predator in the penalty box. Rebić, meanwhile, was a livewire capable of the spectacular from distance. Haller knitted it all together.

It's not been so easy at West Ham. Haller has often been left isolated with the midfield too deep and wide players not close enough in support. In essence, he's been forced to play a traditional target man role in too many matches and it's a waste of his skill set. 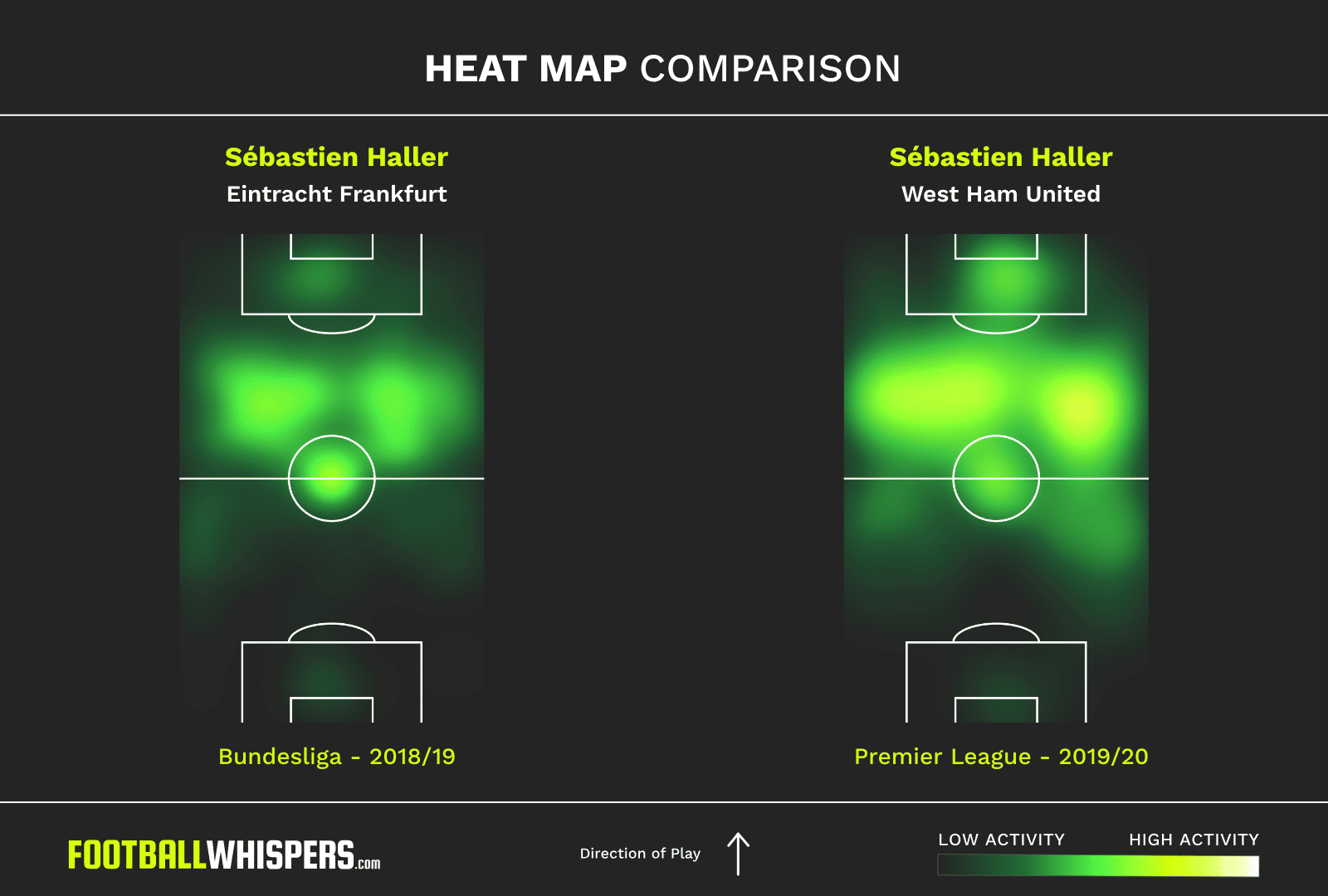 As the above heatmaps highlight, Haller isn't operating in significantly different areas of the pitch at West Ham. It's just what is being demanded of him in these areas is very different.

He no longer collects the ball, turns and looks for Jović or Rebić ahead to link with. Instead, he collects the ball, holds off a defender and waits for support from the likes of Felipe Anderson, Andriy Yarmolenko and Mark Noble.

It's why his forward passing percentage has dropped from 30.4 per cent to 20.5 per cent and why he is completing significantly fewer dribbles per 90 (just 0.30 to 1.16 last term).

Given his size and technique, Haller can play a target-man role for West Ham. It would, however, be a waste of his undoubted talents. So the challenge for Pellegrini is to construct an attack that will bring out the best of the French forward.

It could mean the introduction of another forward or perhaps a greater emphasis from the wide players to tuck infield when the Irons are in possession. The right structure is key.

Haller has proven himself a goalscorer. Create chances and he can take them. But he can be so much more too. If West Ham are to thrive this season, they need to ensure their record signing is given the love he deserves.