When people use the term “Jurgen Klopp player” a picture of Roberto Firmino should be what occupies the mind.

Firmino embodies everything Jurgen Klopp looks for in a player. He’s intelligent with his positioning, he’s perpetually on the move and he’s a grafter. Even when he’s not having the best of games in possession of the ball he’s still having an impact off of it.

He’s an important part of the famed Liverpool press and he’s regained possession in the opponent's half more times than any other player in the Premier League. He’s as much a part of the midfield as he is the attack and he’s arguably the perfect prototype for a defensive forward. 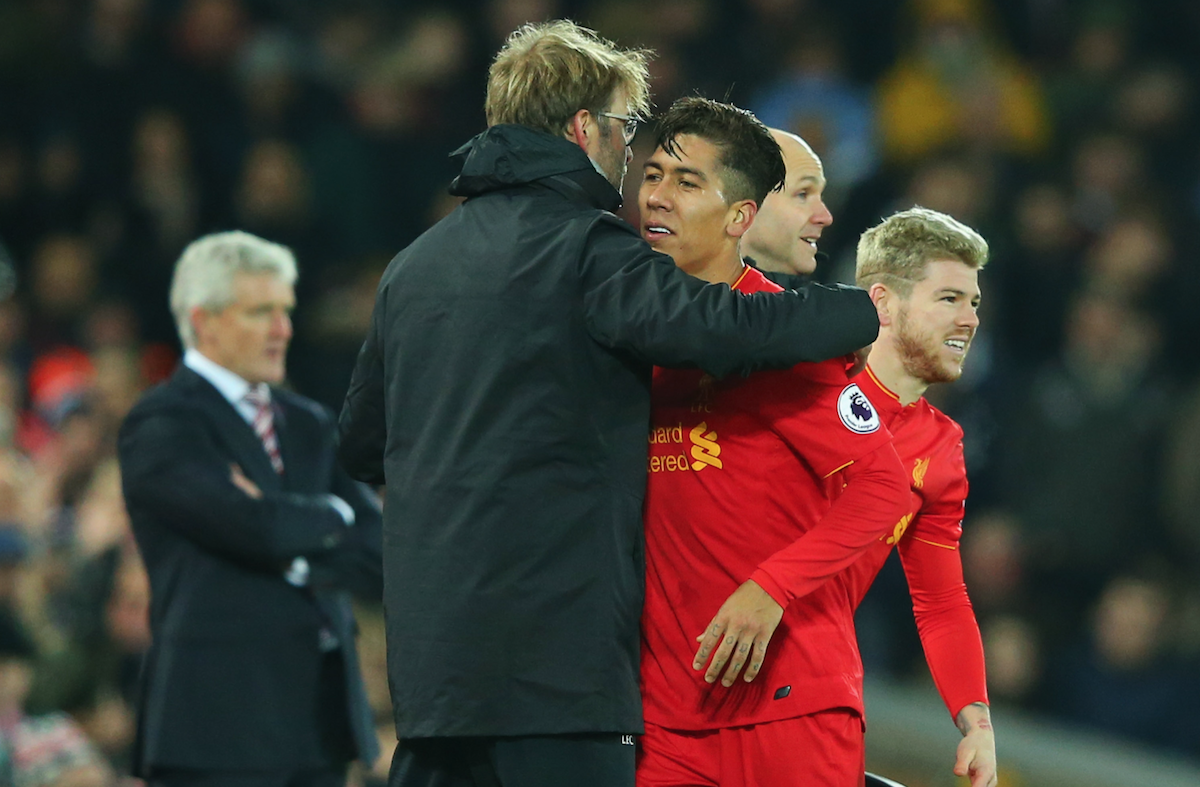 Arsenal legend Thierry Henry touched upon this on Sky Sports Monday Night Football after the recent 1-1 draw with Manchester United at Old Trafford.

“He is Jurgen Klopp’s favourite player,

“I was in awe of what he was doing – at times it was too much. The way he bends his run forces United to play it back.”

Henry has a point, It’s clear that Klopp holds the Brazilian in high regard. The former Borussia Dortmund manager has been a long-term admirer of Firmino for quite some time. He said as much in an interview with the Guardian in December.

“The first thing I did when I left Dortmund, I took my phone and deleted all the numbers so I was not reachable. So I didn’t speak to anyone to offer advice, about Firmino or anyone else.

“Nobody asked me about him but he was a player I thought was one of the best in the Bundesliga. So when I saw that Liverpool had signed him I thought, ‘How could Liverpool do this?’ They were not in their 100% best moment and other clubs would have spent more on him, so I thought, immediately, ‘What a good transfer for them.'

“When I heard about it I thought they had made a good signing, because I felt pretty sure clubs would have paid a lot more for him.”

The enigmatic German trusts the versatile attacker to lead the Liverpool line on a regular basis in place of the prolific Daniel Sturridge. The manager is a believer that suitability beats reputation every single time, and so far he’s been justified.

Since moving to the Premier League, the former Hoffenheim attacker has been involved in a league goal every 147 minutes. That’s a combination of goals and assists. He’s scored just the 18 goals in a little over 18 months at the club but it’s worth remembering he’s played a variety of positions. 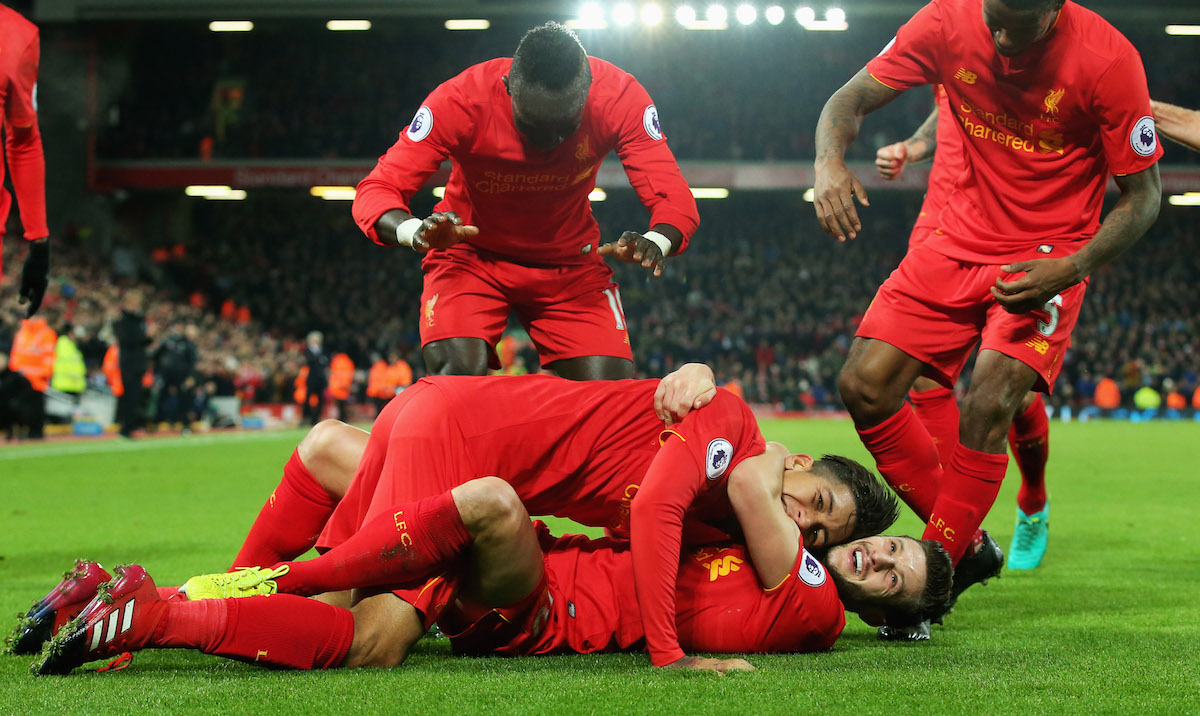 His versatility works against him at times as he’s shifted from a central role, where he’s much more effective, and shunted to a wide position to cover for injuries and suspensions. But when everyone is fit, Firmino is the number nine and it’s quite the vote of confidence.

But there is an elephant in the room.

“We could have scored again. There were some outstanding individual performances. We understand it is a situation that we have to go through together.

“On a physical level there were some brilliant displays from Henderson, Wijnaldum, Firmino.

“My God I don't think I've seen a better performance from a striker without scoring.”

Klopp had that to say after the Reds put second placed Spurs to the sword in a 2-0 victory. It’s a sentence that’s often muttered by Liverpool fans. “Firmino deserved a goal today.”

He’s seen the net ripple just the eight times so far this season but he should comfortably in double figures. He’s missed a whole host of chances, chances you would assume a more ‘natural’ striker would have put away.

This is where the questions stem from. If he wasn’t presented with the chances then it’s doubtful people would be querying him and his quality in front of goal. But it’s because he’s getting these golden chances but failing to put them away that there are slight concerns. 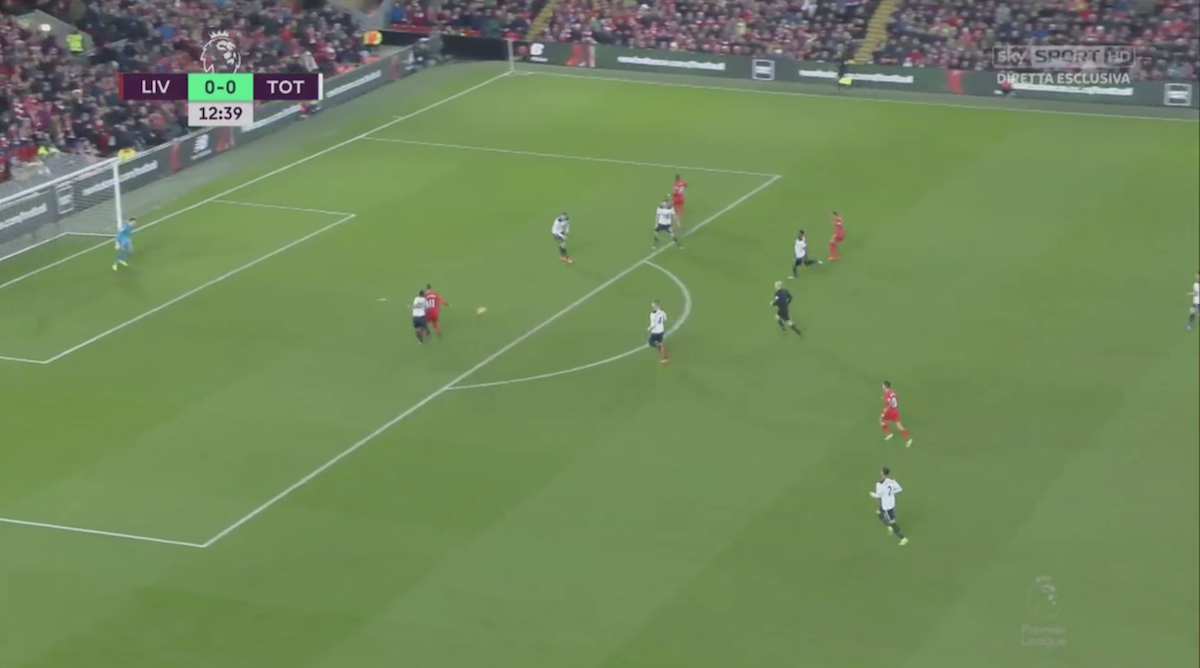 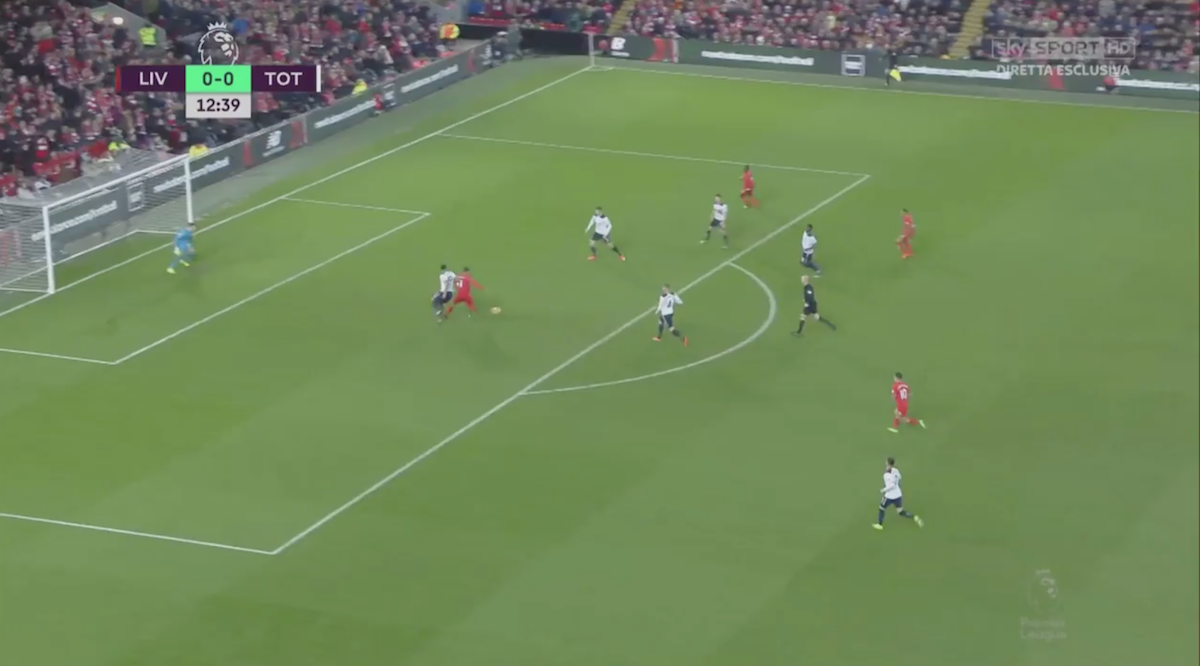 In the win against Spurs Firmino had a chance to put the Reds 1-0 up. The lead up is shown in the two pictures above. Liverpool break from deep and Firmino intelligently gets himself into the position shown in the first picture. Clyne threads the ball through to the number 11 and if his touch is better he’s either definitely testing Hugo Lloris or he’s winning a penalty.

His touch isn’t tight enough and it takes him away from goal and into a number of white shirts. Eric Dier blocks the eventual shot and the opportunity is wasted. 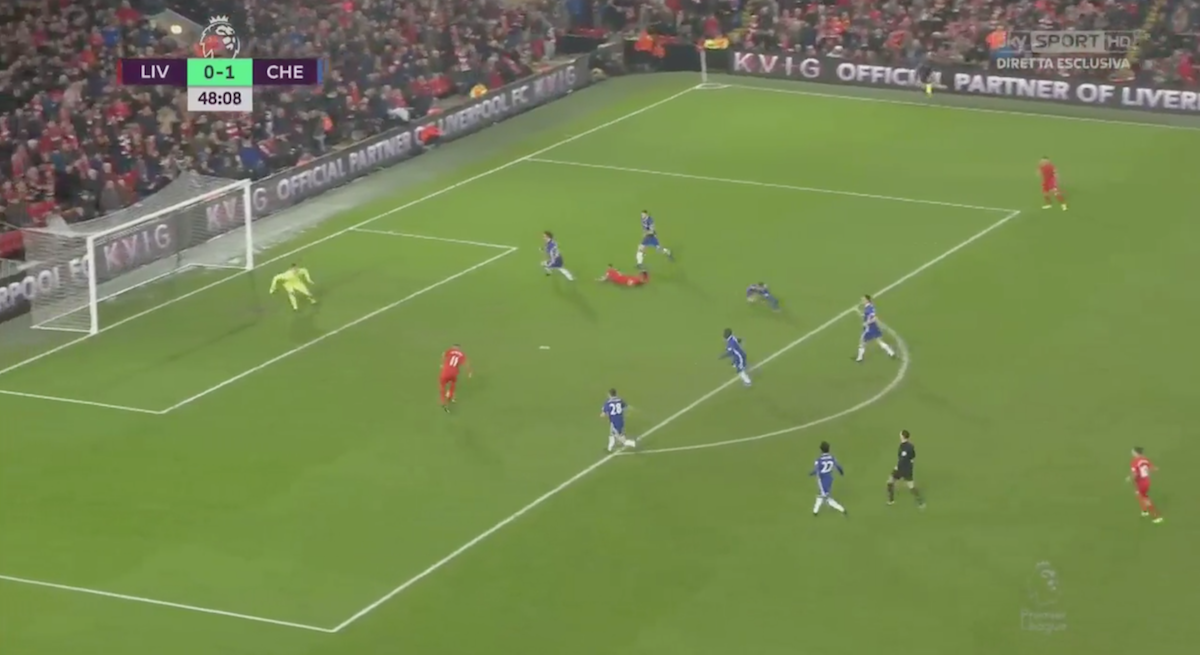 This time it’s against Chelsea. Firmino finds himself free in the penalty area with an abundance of space and more time than he knows what to do with. He could take a touch and then pass the ball past Thibaut Courtois who is scrambling to cover ground. Instead he looks to hit it first time and balloons it both wide and over the bar. It was an ideal opportunity to get the home side back into the match against a side notorious for being defensively solid. 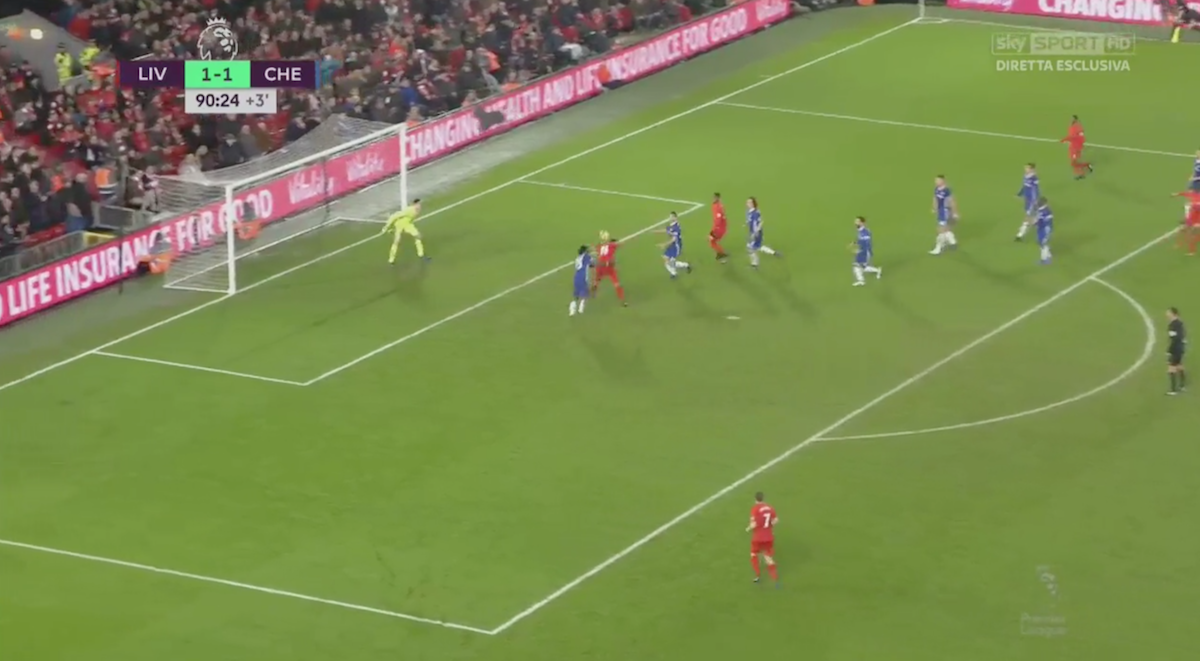 Gini Wijnaldum spared his blushes by grabbing the equaliser against Antonio Conte’s men. But then Firmino had the chance to make amends in added time. The Reds worked the ball well to create an opening for Sadio Mane to chip the ball into the area. Firmino had positioned himself between Cesar Azpilicueta and Victor Moses. The Brazilian is deceptively good in the air and it’s a huge chance for him to bury from just eight-yards out. He doesn’t make it count though and the ball just floats into the ‘keepers arms. 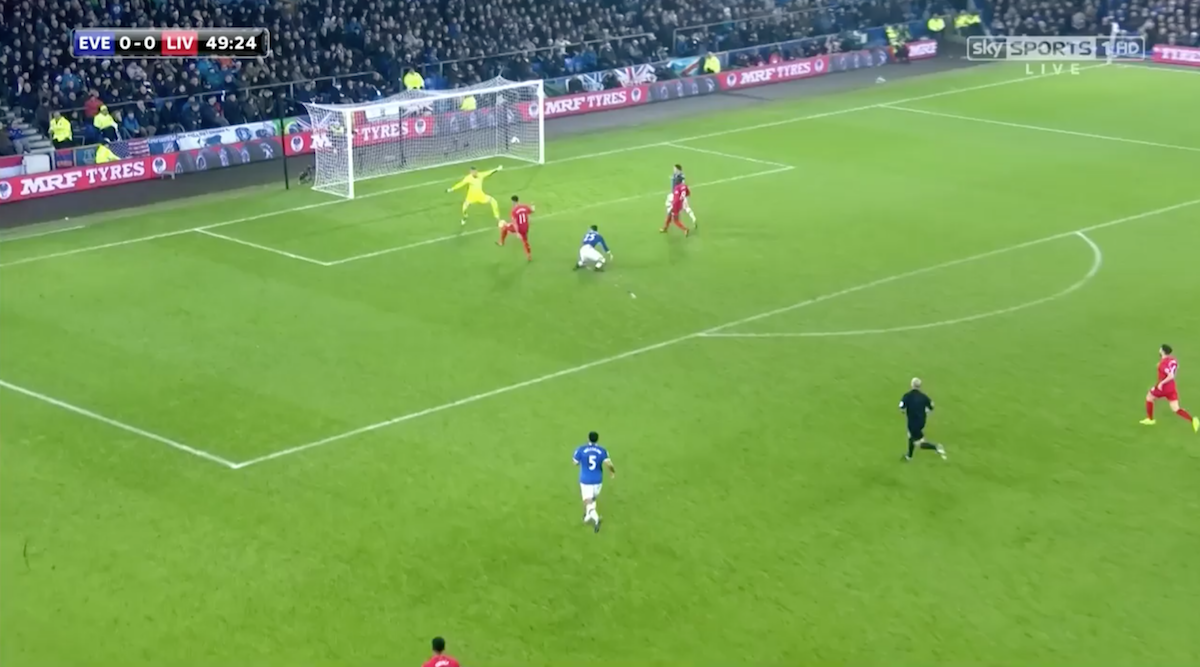 It’s 0-0 in the Merseyside derby. James Milner plays a superbly lofted ball over the top and Liverpool are able to exploit the high line. Both Firmino and Sadio Mane race to make the most of the pass and the former shrugs off Funes Mori before firing his shot straight at Maarten Stekelenburg. The ‘keeper does well to make himself big but a top striker finishes that.

While goals aren’t everything there must be a tipping point. Luckily the Reds aren’t reliant on the striker scoring as they have goals throughout the team and they're joint top scorers in the league. 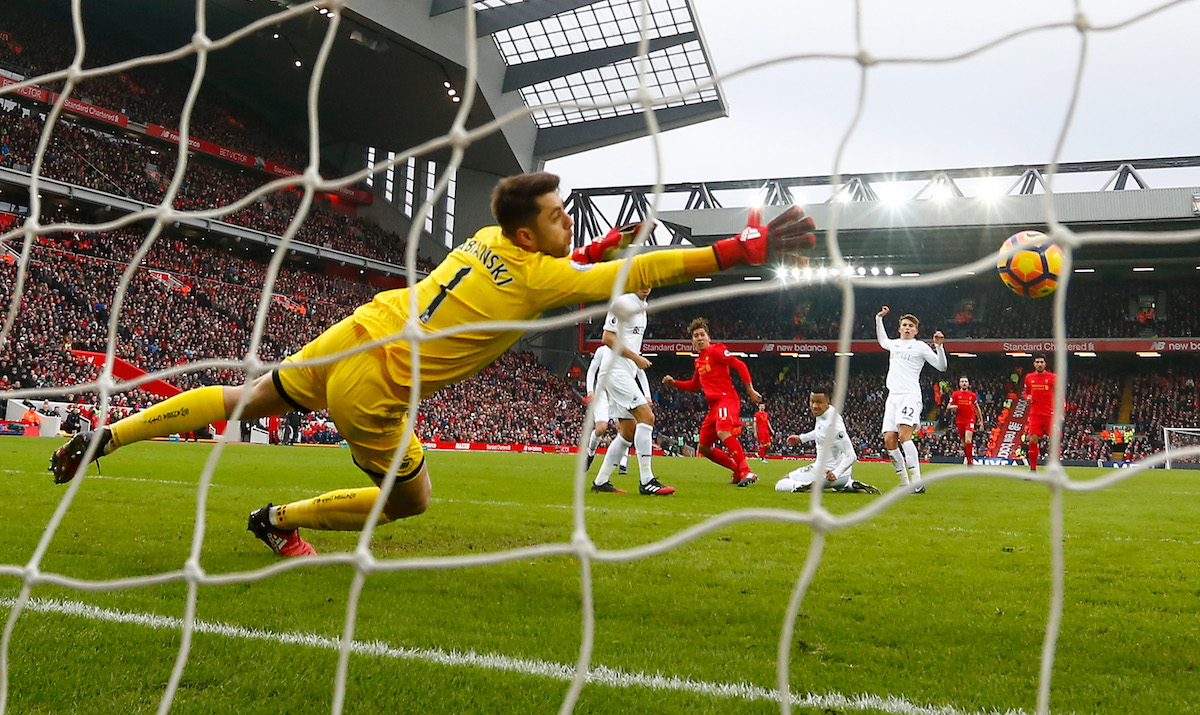 But it must be frustrating because he clearly has the ability to be clinical as he showed in the match against Swansea when he scored a goal of the highest quality to make it 2-2. Could Klopp be tempted to tweak his 4-3-3 system by reverting back to a 4-2-3-1 and using Firmino as the man behind the striker in the summer?

You won’t lose his goal threat or his defensive contribution but the addition of a clinical striker, suited to the system, could see Liverpool scale new heights.