With a contract expiring in the summer 2019, and Mohamed Salah, Daniel Sturridge, Said Mané and Roberto Firmino ahead of him in the attacking pecking order at Liverpool, Divock Origi's season-long loan to Wolfsburg feels more like the beginning of the end of his Anfield career, rather than a chance to gain first-team experience ahead of returning to Merseyside.

Had the 22-year-old Belgian striker's future with Liverpool been assured, he would surely have been offered new terms before heading off for a season in the Bundesliga. But, with his contract winding down, his loan with the Wolves is likely little more than an opportunity to put himself in the shop window.

However, Origi's form in Germany has been impressive to date, netting four goals and registering one assist in eight starts.

If he continues to shine within this Wolfsburg side, who are 14th in the Bundesliga currently and hardly having things their own way, Origi stands a chance of forcing his way back into Jürgen Klopp's future plans.

With talk of Liverpool transfer targets already being identified ahead of next summer, competition for places at Anfield is only going to get stiffer. But Origi, at 22, still has plenty of room for improvement, and time is on his side if he hopes to blossom into a top-class forward.

The former Lille prodigy, who signed for Liverpool as a teenager in the summer of 2014 before staying in Ligue 1 for an additional season on loan, scored seven goals and registered three assists in 34 total Premier League appearances last term – although he made only 14 starts.

Benefitting from a regular run in the team and the confidence of knowing he is the first-choice option in his position, Origi looks altogether more confident, and is well on course to eclipse last season's goals and assists return with Wolfsburg, despite playing for a side which averages 7.1 fewer shots per game than the one he left.

In his two seasons at Anfield, Origi's longest run of starts came towards the end of last season, when he was named in Klopp's line-up in seven consecutive league games.

In little more than two months with Wolfsburg, he has started eight of the nine Bundesliga games since he signed for the club, including a run of seven straight starts in the first seven games he was eligible for.

This consistency of selection has enabled Origi to settle into his surroundings, become accustomed to the system he is performing in and acclimatise to the realities of a new division in a new country.

As such, he has been able to demonstrate the full of his abilities, scoring poacher's goals by latching onto through-balls and crosses, using his physical gifts to successfully challenge for aerial balls, drifting wide where his pace and dribbling ability helps him create space and chances for others, and showing off the kind of off-the-cuff creativity that was seldom seen at Liverpool.

One example of Origi's ability to conjure a scoring chance for himself from a situation that looked unlikely to lead to one came in Wolfsburg's 1-1 draw with Hoffenheim last month.

Collecting the ball in the right channel, the Belgian's options were limited and he appeared to be well marshalled by his marker. However, turning quickly and tightly, he cut inside, traced a run along the edge of the penalty area and curled a left-footed shot towards the top corner, denied only by the post with the goalkeeper beaten.

Confident and in form, Origi is a handful for any defence, and could yet be an asset for Liverpool given the chance.

Liverpool‘s strength lies in the vast talent in their attacking department, a roster of high quality boosted further by the signing of Salah from Roma this summer. The Egyptian has seven league goals already and, on the evidence of the Reds' recent 4-1 win away to West Ham United, could be set for a central role after starring on the wing.

This means if Origi is to return to Liverpool at the end of his loan spell, the deck will be well and truly stacked against him in terms of earning regular minutes as a starter. 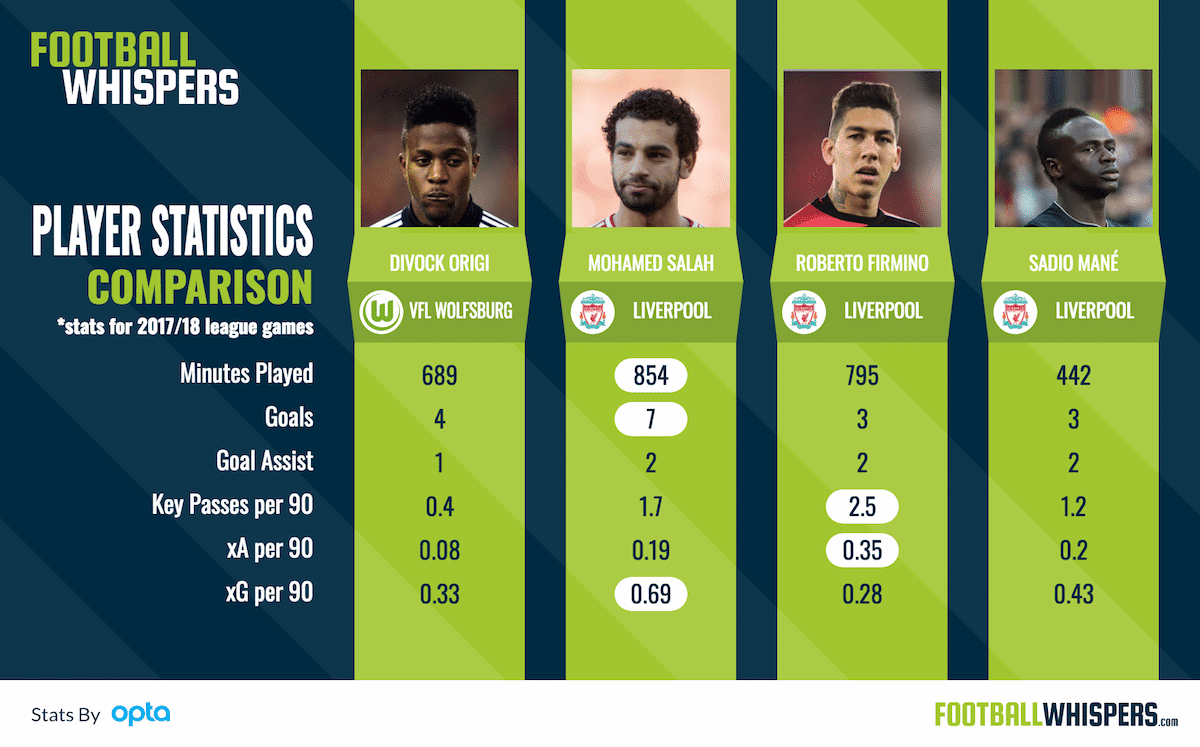 As the above graphic shows, Origi, despite his fine form, remains less of a goal threat than either Salah or Mané. And, while he has shown himself to be more prolific in front of goal than Firmino, he is far less creative than the Brazilian, and therefore a less ideal fit for the false nine role the former Hoffenheim star occupies.

All this goes to show that if Origi does return to Anfield next season, he is unlikely to trouble the starting XI on a regular basis, faced as he is with three top-class players in the positions he can play, while Sturridge – and any further attacking additions Klopp makes – will be next in line should any of the first-choice trio fall injured.

A bit-part role, such as the one he held before leaving for Wolfsburg, is probably still the best Origi can hope for at this stage of his development. The only question remaining is whether Klopp wants to hang on to the Belgian youngster, who clearly has high potential, or whether he will decide to move Origi on, for the good of both player and club.