Is Nelson Semedo an Upgrade for Chelsea's defence?

One of Antonio Conte’s biggest calls this season was moving to his trusted three-man defence. Unlike at Juventus, he found a way to play with three up front, adapting it to the new famous 3-4-3.

To make the formation work, he needed a right wing-back. Branislav Ivanovic is too old for the rigours of that role, so it was an out-of-the-box move to play the former Wigan Athletic and Stoke City forward, Victor Moses in that unfamiliar role.

Despite his excellent performances, it will always be seen as an area that needs improving. If Conte can work with a more natural option in that role, the Blues could be even better. That’s a scary thought.

With that in mind, it’s no surprise that they have been linked with full-backs, and he Portuguese papers are reporting that Chelsea have joined the race for £34million-rated Benfica full-back Nelson Semedo. 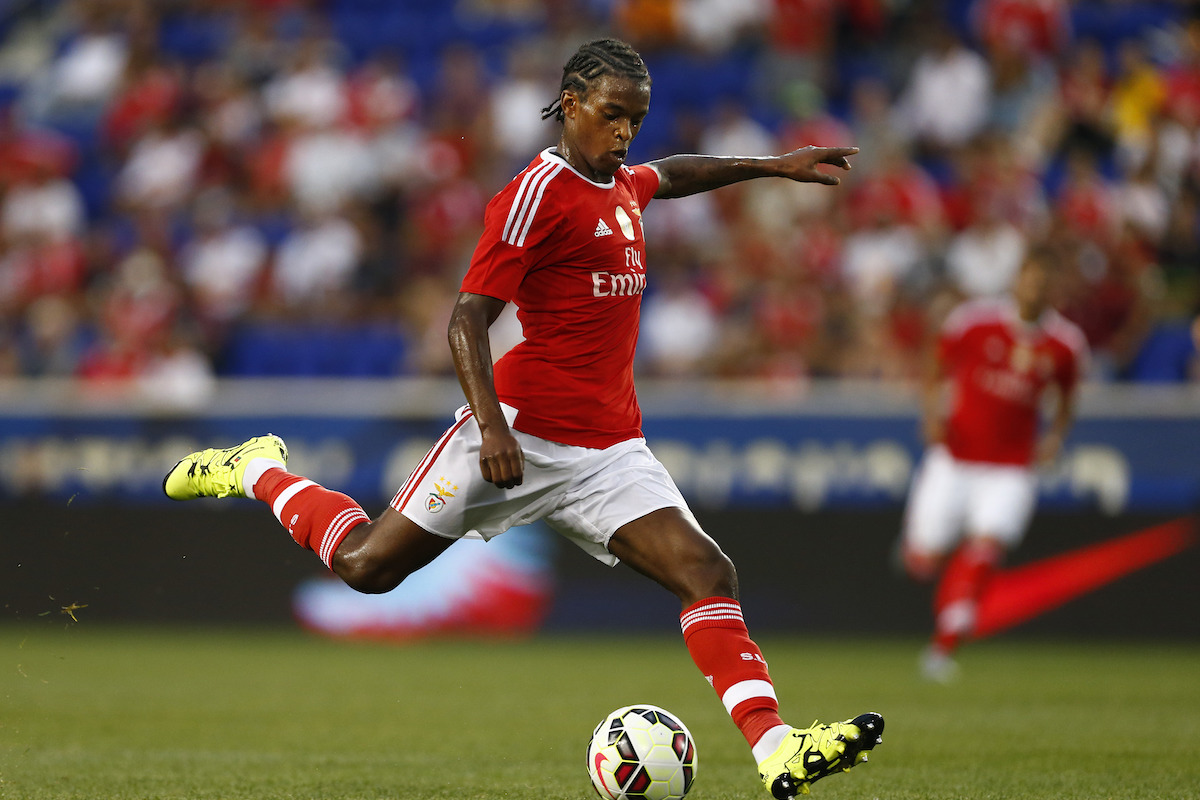 Manchester United and Bayern Munich have been linked in the past. Rather than just replace Moses, as the Nigerian is the only player able to play in that role, Nelsinho would provide competition and give Conte another option.

The 23-year-old, who has one cap for the senior Portugal team, is contracted at the Lisbon giants until 2021, but that will only succeed in making sure that the Portuguese league leaders get full value for their youngster.

Plus, the player admitted in January that he was in no hurry to move on just yet.

“You can rest easy,” he said. “I’m completely focused on Benfica and I’m hoping to continue here for many years.”

Semedo signed his current deal in 2015, so it is unlikely he makes anything like the club’s top earners — Raul Jimenez, who is a year older, earns around £30,000-per-week.

Youngster Ruben Loftus-Cheek earns £35,000-per-week at Chelsea, so there’s no doubt that a big money signing would be handed something in the high five-figures range, maybe just short of the £110,000 that N’Golo Kante was given when he signed in the summer.

As a Jorge Mendes client, although there would be no problems in the negotiations, there’s little doubt the ‘super-agent’ will make sure his player gets the best possible deal.

What Chelsea fans will want to know is, is he worth the attention? Is he the player to help this 3-4-3 advance to the next level and compete in the UEFA Champions League?

From watching the 23-year-old play, the answer in unclear. Going forward, you can see all the attacking instincts that Conte will want, but it’s defensively where the improvements would need to happen, and fast.

What Semedo does well

Playing in Benfica’s back four, Semedo always has a high starting position. He is ready to attack, playing on the front foot. 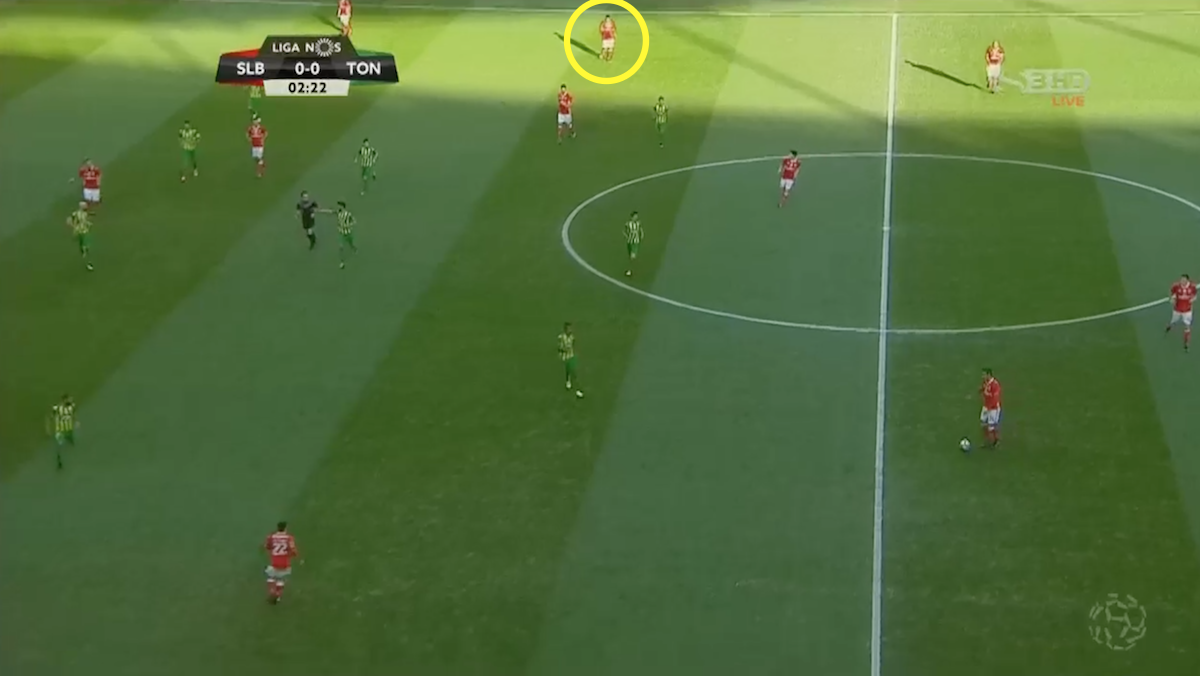 He knows he has the pace to recover, and as soon as the centre-backs pick up possession, he is looking to make runs in behind.

The Lisbon-native plays almost as a winger at times. Picking up an assist in the weekend’s win over Tondela, you can see his high position (yellow) and when the ball comes back, the opposition left-back drift’s inside and Semedo makes his move. 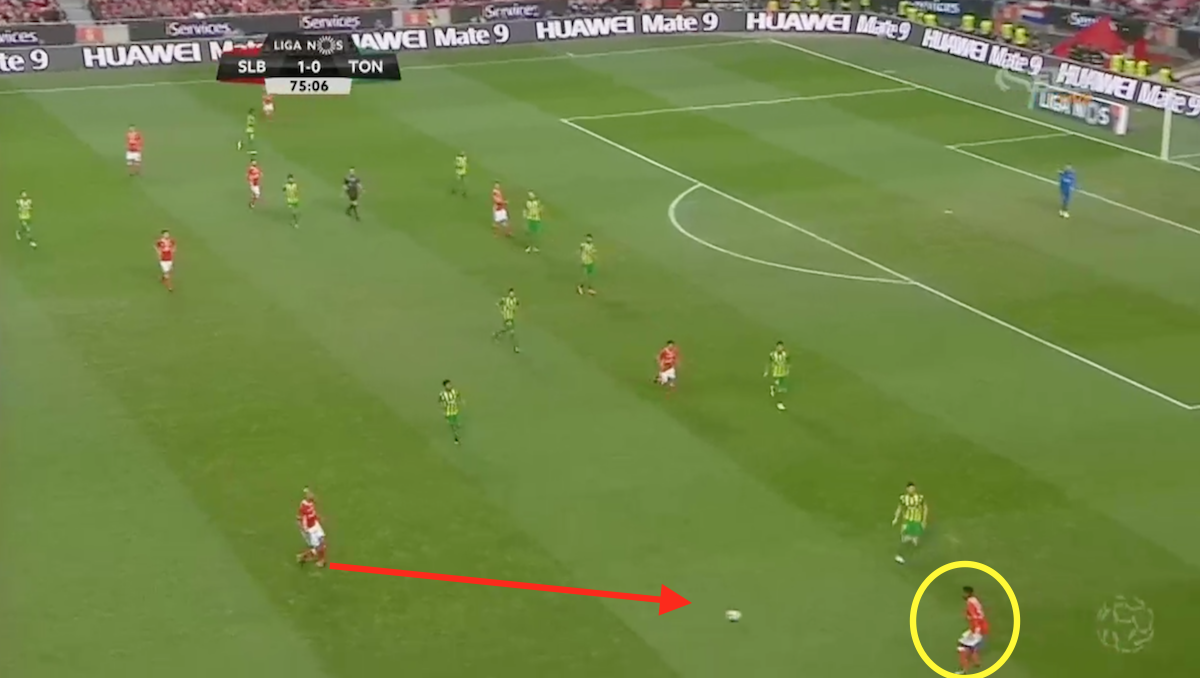 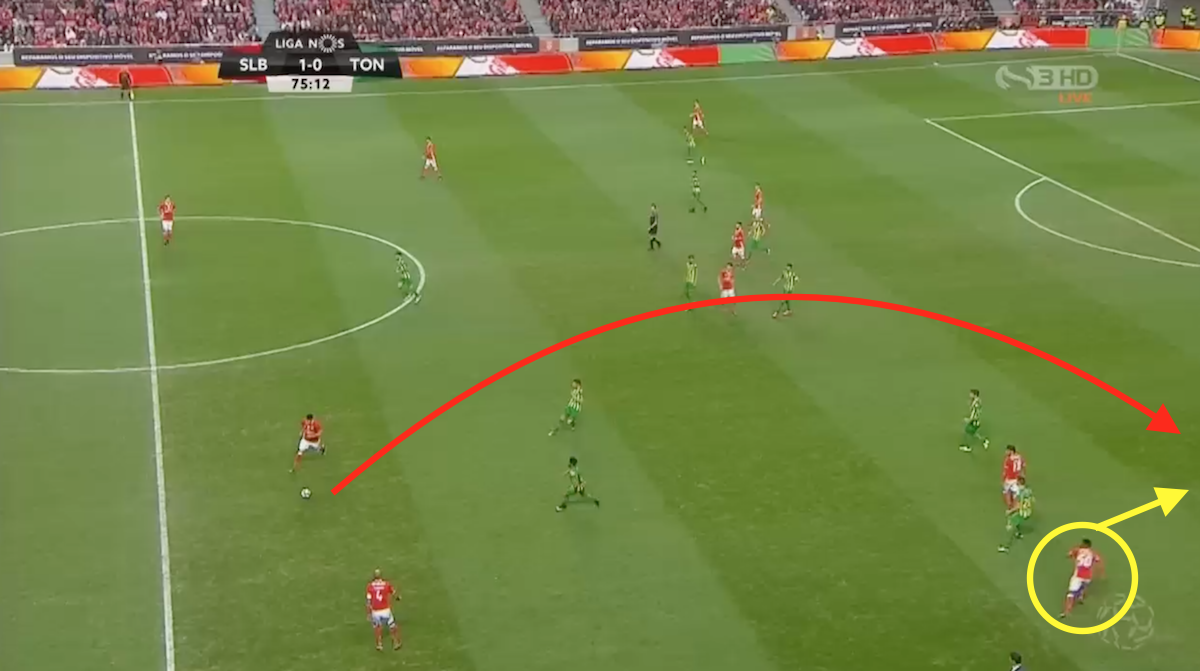 The right-back is free inside the penalty area, but he then keeps his head up, picks out a runner at the edge of the box and his team go 2-0 up. It’s the perfect play and something that he would have the opportunity to do at Chelsea. 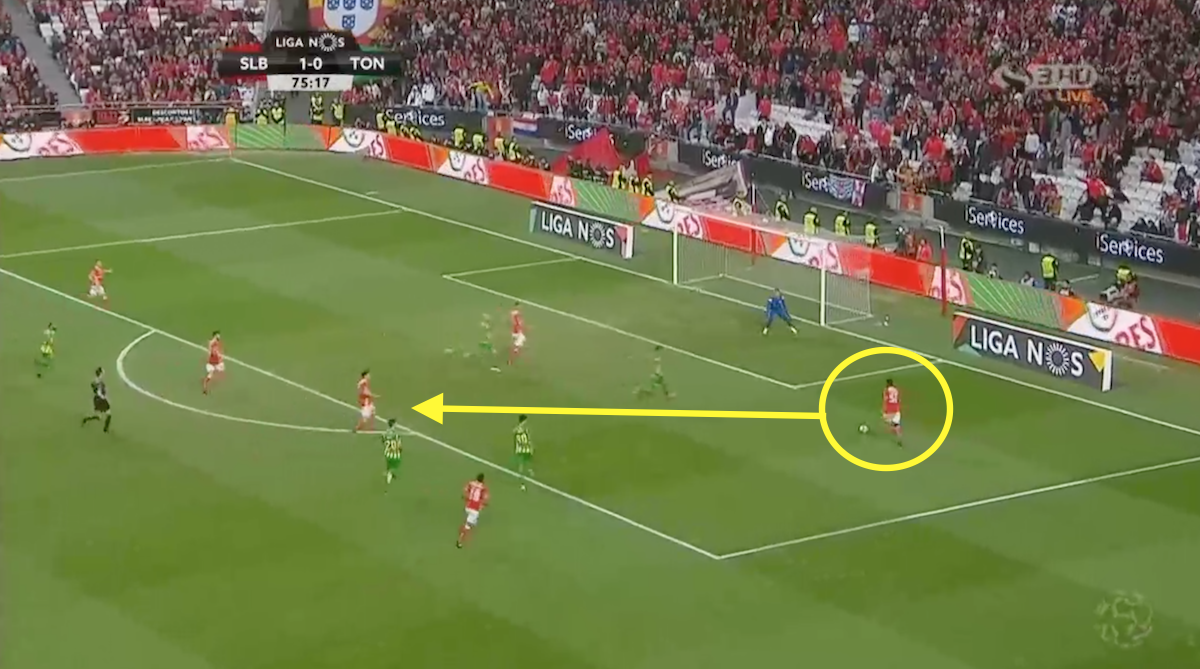 When he gets wide, he can deliver intelligent crosses with his right-foot. He doesn’t just drill them across goal, he looks to pick a pass.

All too often, wide players can delay the final ball, but Semedo looks to play it early, catch defenders off-guard.

In comparison to Moses, Semedo averages more tackles per game, also more interceptions. However, the Portuguese defender concedes more fouls and gives the ball away more times per game. 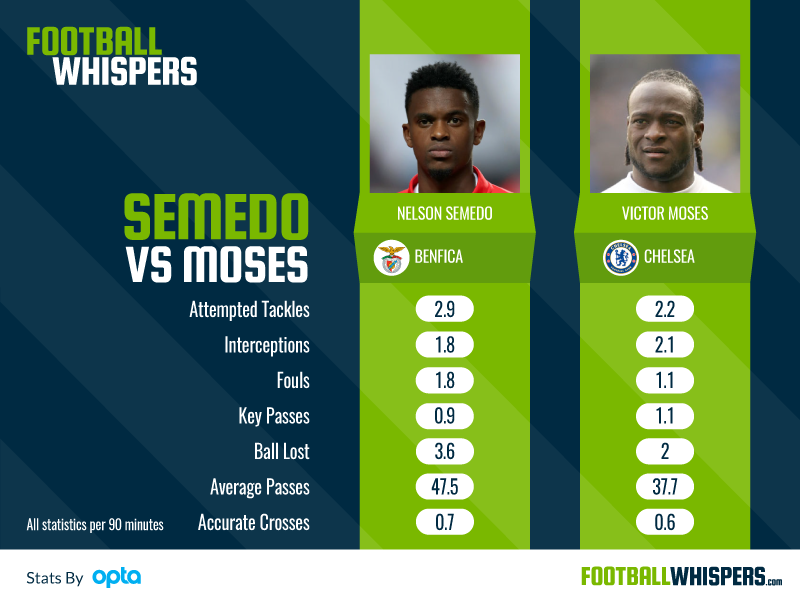 There would be a difference in stats if both players swapped teams, that is perhaps why Semedo averages more passes per game, more crosses and has a higher pass completion.

It would change if he was playing at Stamford Bridge, but he would also need to improve his intelligence defensively.

Playing against Boavista earlier in the season, although his team would come back to draw 3-3, Semedo was to blame for two of the away team’s goals.

The first was a silly foul, Nelsinho rushing into the back of a defender. The resulting free-back was played into the box and Boavista took the lead.

At 2-0 down, you would hope the defence would tighten things up, but it was quite the opposite.

Semedo (yellow) has a forward outside him, but when the pass is played in, the defender rushes in to make a tackle, the ball is flicked on and he is then out of position; Boavista get the cross in and the away side make it 3-0.

The 23-year-old should have tracked back to hold the line, let the attack bring the ball forward and have another body between them and the goal. It was a poor decision, and something that is definitely apparent in his performances.

When he stays on his feet and looks to hold the attackers up, he’s strong and looks impressive, he just has moments where he rushes in and lets his youth get the better of him. That can easily be coached out, especially with someone as savvy as Conte in charge of him.

It’s difficult to say if he’d be a massive improvement on Moses in that role, no one knew the Nigerian was going to be as impressive as he has been. However, it’s easy to see why the big clubs are interested in the young Portuguese defender.

Even in a back four, he already plays the wing-back role in the style of Benfica’s attack. Chelsea would welcome another player that can add to their attack, and he could go on to be a special player given the right chance to develop.

Make sure you watch the latest episode of Football Whispers TV