There have been rumblings for a number of weeks that Liverpool would make their move for Naby Keïta after they had secured the signing of Mohamed Salah.

The Egyptian's move to Anfield was made official and, like clockwork, many of the reliable Liverpool journalists have turned their attentions to the RB Leipzig man.

James Pearce of the Liverpool Echo claimed signing Keita would be a priority for the Reds.

Melissa Reddy of Goal.com reiterated this point during a Q & A on reddit, saying: “RB Leipzig will be difficult to negotiate with as they don’t want to sell Keita and want to build their team around him.

“It may take £50million plus to convince them otherwise, and even then, they could insist he’s not leaving.”

However, the deal looked to have been stopped dead before it was even able to catch pace. Oliver Mintzlaff, the head of soccer operations for Red Bull, revealed the club wouldn’t be selling Keïta, or any of their other key players.

“It would be negligent to sell one of our key players now,” he told BILD.

However, over recent days that stance appears to have changed with the same outlet revealing the Bundesliga side want €80million for the former Red Bull Salzburg man.

The Guardian believe Liverpool are serious about landing the Guinean international. And Bundesliga journalist Raphael Honigstein used his Twitter account to reveal that the player wants to leave.

Reports then surfaced to reveal Liverpool had seen a €63 million bid rejected with the Bundesliga club wanting closer to €75million.

Is Keïta worth the fuss?

Many people these days get hung up on transfer fees. If a club can afford the deal then the player is worth it. It's that simple really.

There may be cheaper alternatives out there but there's a reason that the club has identified this particular player as their top transfer target.

In the case of Liverpool and Keïta; no, the midfielder isn't worth £70million, but the same could be said for hundreds of transfers every single year. He's viewed as a prime target because his playing profile is so unique.

You can read a detailed profile on the 22-year-old here.

He's an all-rounder, managing to perfect the balance between attack and defence, and he's still nowhere near his prime. The fact he's only had one year in the Bundesliga is irrelevant, the quality is there for all to see.

On paper, at least, he's perfect for Jürgen Klopp. He's quick to close down space and with seemingly endless stamina. In that sense he's similar to N'Golo Kanté and he never seems to be more than 15-yards away from the ball. He's creative and efficient at the same time and can effectively operate anywhere in midfield.

If he arrives at Anfield and the Reds win the Premier League, the Champions League and a host of other trophies during his time in the heart of the midfield, does his transfer fee even matter?

He could be dominating midfield for the next decade; he has all the tools to do so, the platform to impress and the manager to develop him. He's not just a short-term fix.

You also have to factor in that the market is volatile right now. What was £15million three years ago has now effectively doubled. The TV money being pumped into the English league has moved the goalposts.

There's also the player's impact off of the field to take into account. During the 2014/15 season, Chelsea recorded a high percentage of shirt sales in Nigeria because of John-Obi Mikel's involvement in the first-team.

Liverpool as a brand, especially under Fenway Sports Group, is always looking to expand. Salah's arrival will no doubt see a spike in shirt sales because he arrives with 2.43million Twitter followers, 6.9million likes on Facebook, 4.5million followers on Instagram.

Keïta doesn't have that much of a social media presence, yet, but his popularity is growing. He was voted into the Bundesliga Team of the Year for 2016/17 and only Robert Lewandowki had more votes than the diminutive midfielder.

Manuel Neuer, Mats Hummels, Ousmane Dembélé and Pierre-Emerick Aubameyang all had fewer votes despite getting much more media coverage. Futhermore, close to 80,000 of the votes came from Africa. The eyes on Keïta are only going to grow, thus his marketability is only going to increase with every passing season.

The Pressure of the Fee

Paul Pogba is currently the world's most expensive player. The price tag weighed heavy during his first season back in England with many calling him a flop because he wasn't putting in Lionel Messi-esque performances on a regular basis.

The price-tags bandied about these days will no doubt impact how players are judged. Keïta, if he were to arrive for £70million, would have the weight of expectation immediately placed upon his shoulders. Every performance would be micro-analysed, every misplaced pass jumped on and every 6/10 performance turned into a 3/10. It's just what happens in England.

But, using the £89million fee Manchester United parted with to secure the services of the French midfielder, are RB Leipzig correct in wanting £70million for their box-to-box dynamo?

It's risky to put too much emphasis on stats without adding context. In the graphic above we're looking at Keita's 2016/17 season and Pogba's final year in Turin before his record breaking move. 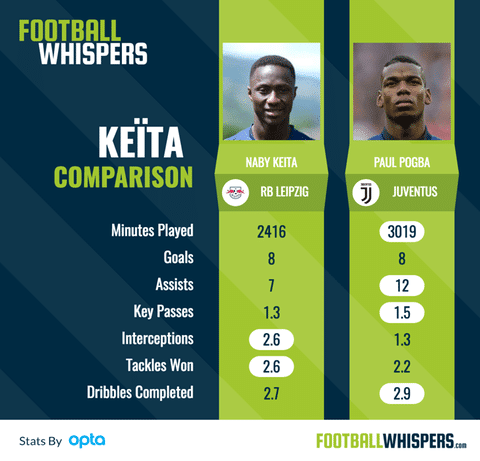 Pogba played in a creative box-to-box role in a three man midfield in what was by far the best team in the league. He was involved goal every 150 minutes.

Keïta, however, was playing in a 4-2-2-2 system in a newly promoted team under a new manager with a number of new players. Yet despite this he was involved in a goal every 161 minutes, and this while playing in a deeper role.

He was making just the 0.2 key passes fewer than the Frenchman, and the difference was the same when looking at dribbles completed. All the while coming out on top in terms of tackles won and interceptions.

Pogba, no doubt, has more of a brand and is a lot more marketable than Keïta. But the Leipzig man is two years his junior and has the potential to carve out his own niche in a competitive market.

All in all, when you consider everything, £70million sounds fair. He'd have an immediate impact on the team but it's what he could be in the future that fans of the Merseyside club should be salivating over.

If FSG are wanting to back Klopp, paying up for Keïta couldn't be a clearer indication.