Everton’s impressive start to life under Ronald Koeman has stuttered a little as of late. The Toffee’s went from five straight wins and undefeated in six to just the one win in ten yet despite this torrid run of form they’re still well within touching distance of European football and clear of the relegation zone. Off of the pitch it’s kind of mirrored what’s happened on it. Koeman was heralded as a God originally but after the red Christmas tree debacle, coupled with this run of results, there’s not a lot of goodwill aimed his way right now.

There’s been a lot of talk as of late surrounding Everton needing a new centre-back to replace Phil Jagielka, a new midfielder to replace the ageing Gareth Barry and a new striker so the team aren’t as reliant on Romelu Lukaku. They could sign one player who’d have an impact on two of their three needs. That player is Lyon captain Maxime Gonalons. But how might he have an impact on Everton’s current predicament? To identify how you need to first understand what’s been going on at Goodison Park. 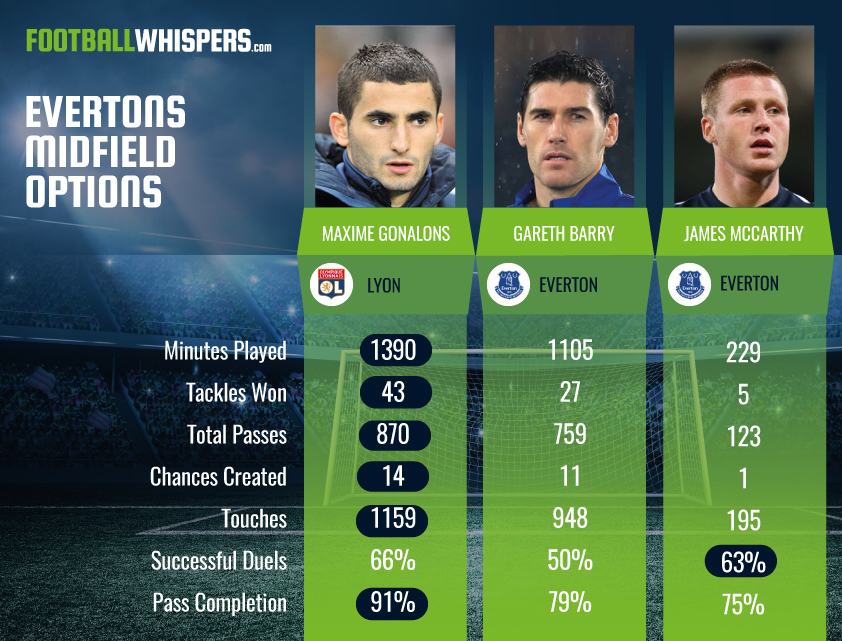 While there have been flashes from Koeman’s Everton, there’s still a feeling amongst many that they’re lacking an identity. What won’t have helped consistency is the fact, according to Whoscored.com, Everton have used seven (4231, 433, 442, 532, 4312, 343 and 3421) different systems this season already. Being so flexible is admirable but chopping and changing so frequently can also be counterproductive. It’s as though Koeman is still yet to know what his best side is even though he’s been in the job for six months. It’s unlikely those at Goodison will see any regularity from their team in terms of form and positive results until Koeman settles on a system and a team.

There are signs though that they have the right pieces, they just need to be placed in positions they can be their most effective.

What can you expect from Koeman’s Everton?

Koeman’s sides often look to protect their defence with a centre-midfield pairing and it’s something he’s looked to continue at Everton with Gareth Barry and Idrissa Gueye acting as two box-to-box midfielders in a lot of matches. Although they have only kept three clean sheets in their opening 14 matches it’s rare to see them exposed centrally as it the stats may suggest. Chelsea result aside, which was just a disaster, Everton haven’t been carved open on a regular basis. The attack is built around supporting Lukaku and the players Koeman selects to start are usually versatile enough to play a variety of attacking positions. 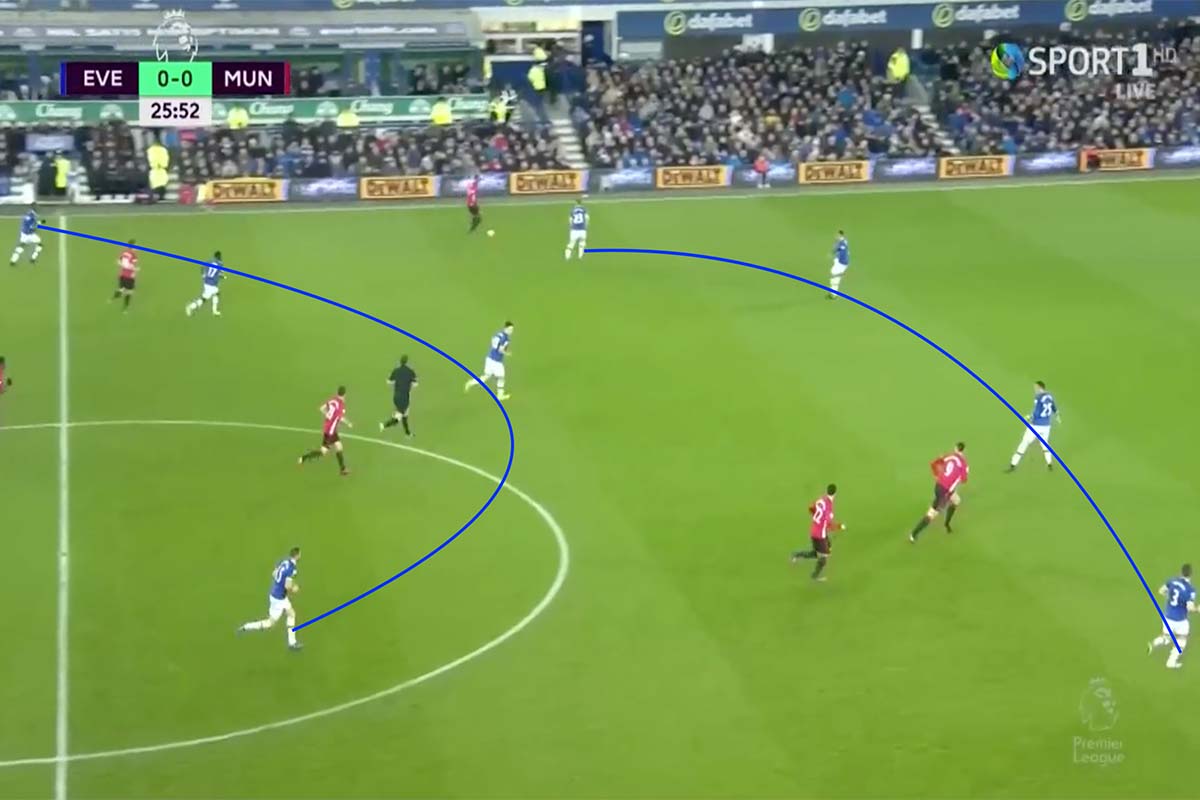 Against Manchester United Everton lined up in a 442 formation with the surprise being the fact Tom Cleverley lined up on the left of the midfield and Kevin Mirallas was tasked with supporting compatriot Romelu Lukaku in attack. It may not have been the most orthodox use of the players but it was effective and Cleverley supported the attack as well as tucking in at times to make a three alongside Gueye and Barry. 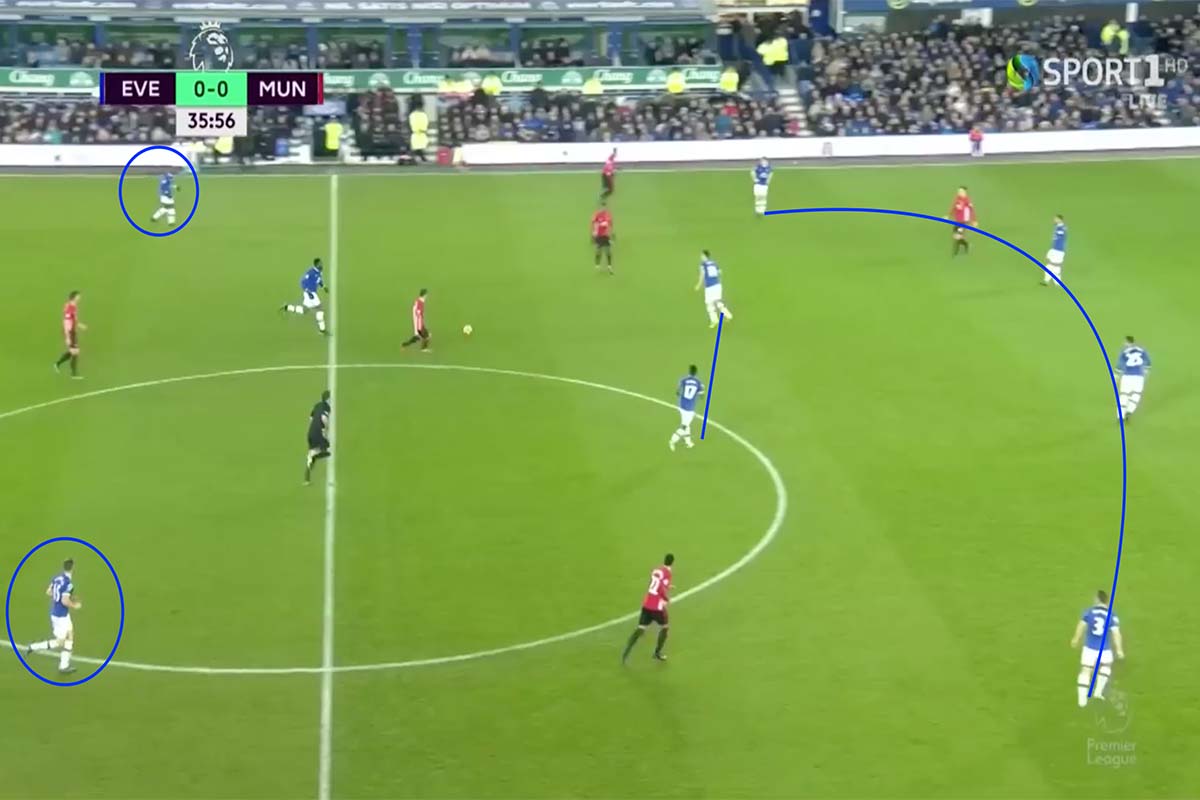 Again, it’s another picture from the draw with Manchester United but it highlights what Koeman expects from his centre-midfield pairing. The full-backs, Coleman and Baines, had looked to progress with Everton in possession but Lukaku lost it and that’s why the back four are almost in a half moon shape. The wide midfielders had pushed on to support the attack but neither Barry or Gueye had committed themselves forward and are in good positions to stop the United attack centrally. 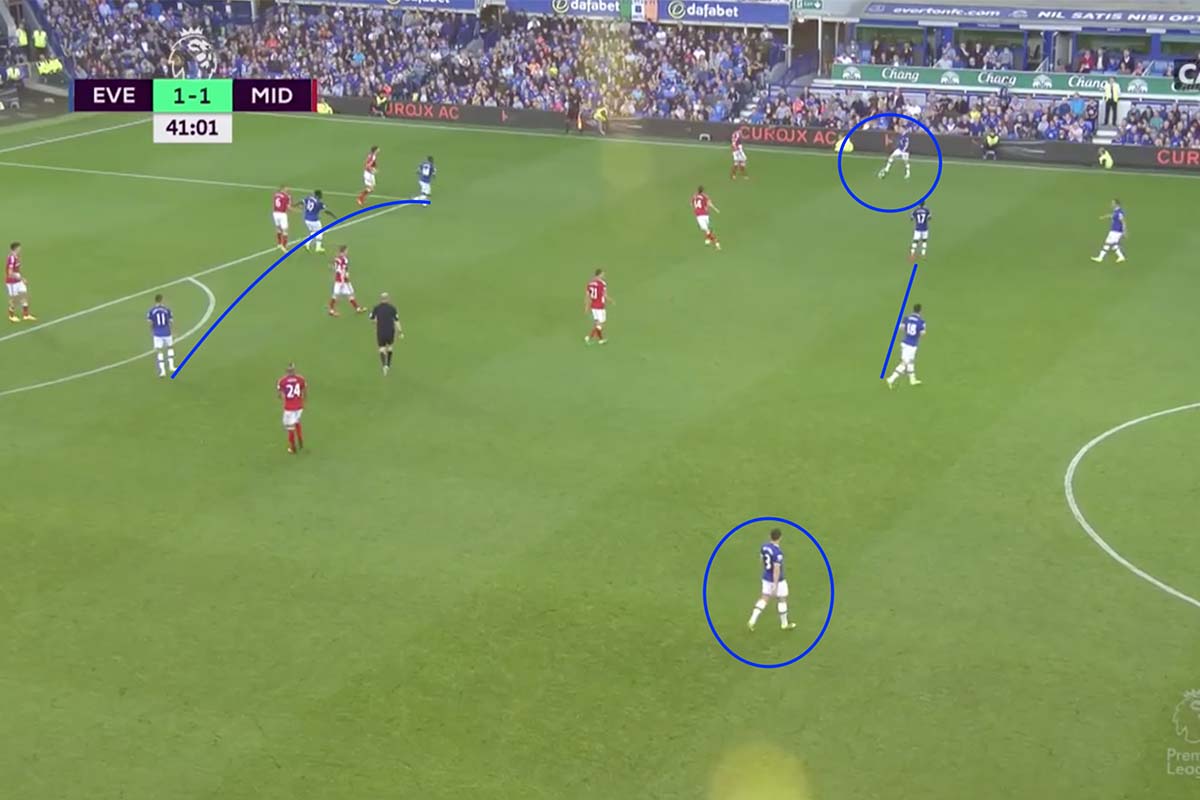 This time it’s a picture from the win against Boro. Everton lined up in a 4231 formation with the three behind the striker being allowed to fluid and interchangeable. In the picture above you can see the full-back’s circled with both Mirallas and Bolasie supporting Lukaku and Ross Barkley just off of the screen to the left. What’s important here though is how the centre-midfielders are close together and supporting the play but not overcommitting.

Formations aren’t the be all and end all. It’s the functionality of the players which is important and both Gueye and Barry highlight this.

Idrissa Gueye – Signing of the Season?

Throughout all of the aforementioned change, one thing that appears to be constant is the midfield duo of Gareth Barry and Idrissa Gueye. Gueye, a £7.2 million signing from Aston Villa in the summer, has been one of the signings of the summer and looks to be a bargain. He’s adapted to life under Koeman with relative ease and has rediscovered his Lille form. Both he and Barry seem to have formed an unlikely partnership at the heart of the Everton team. If Everton were performing better as a team then more praise would be directed the way of Gueye. He’s this season’s N’Golo Kante without the supporting cast. 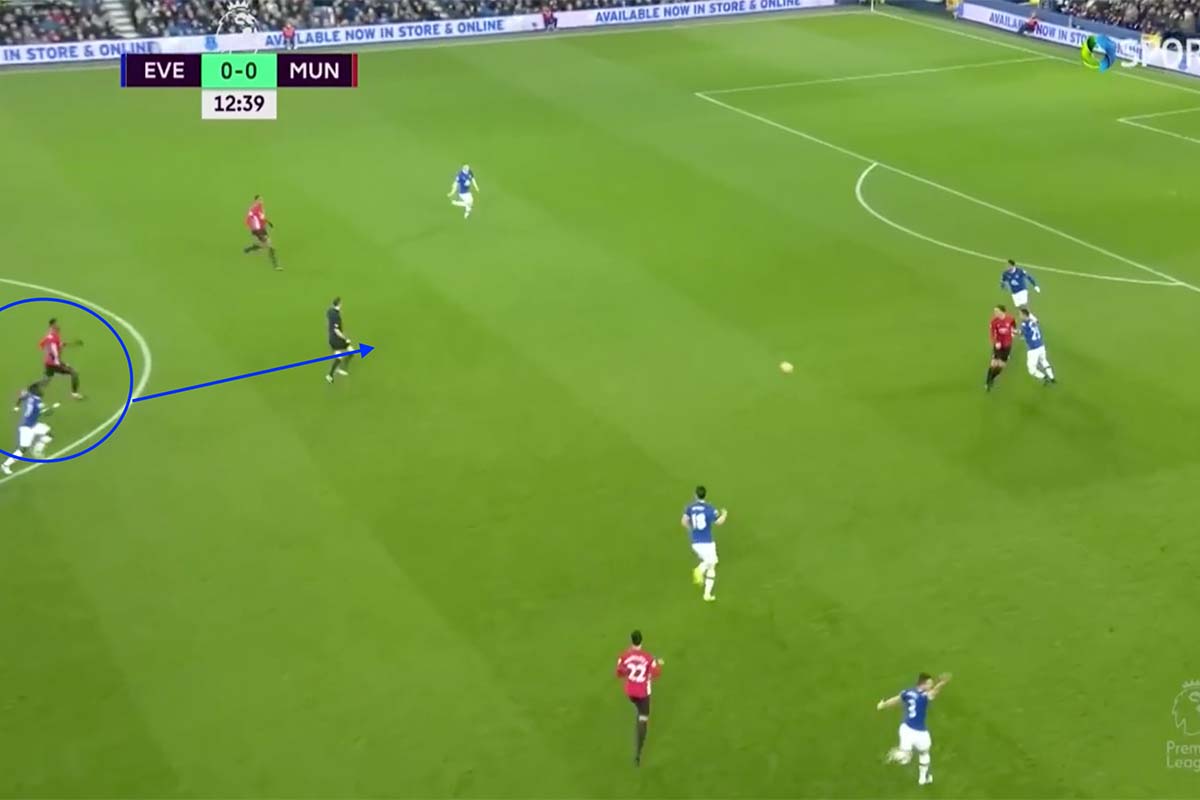 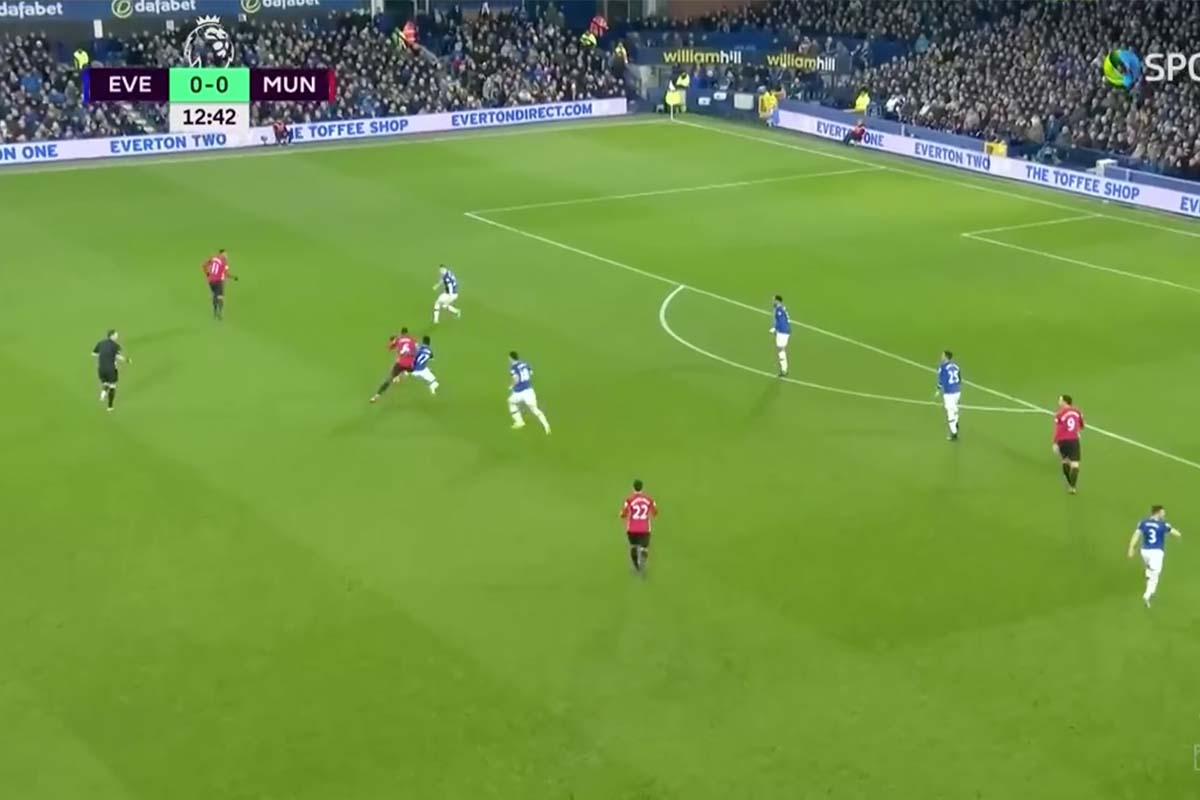 In the two pictures above Gueye shows off a few of his many strengths. After looking to support the attack initally he tracks back, keeps pace with £89 million man Paul Pogba before executing a perfect tackle to quell that attack. In the first picture the hole Pogba is looking to run into would usually be filled by Gueye. In the second picture it’s a more familiar shape with Gueye back there dispossessing the United number 6. He knows he has to be disciplined and he knows he basically has to be in two places at once if the opposition turn defence into attack as United did above. 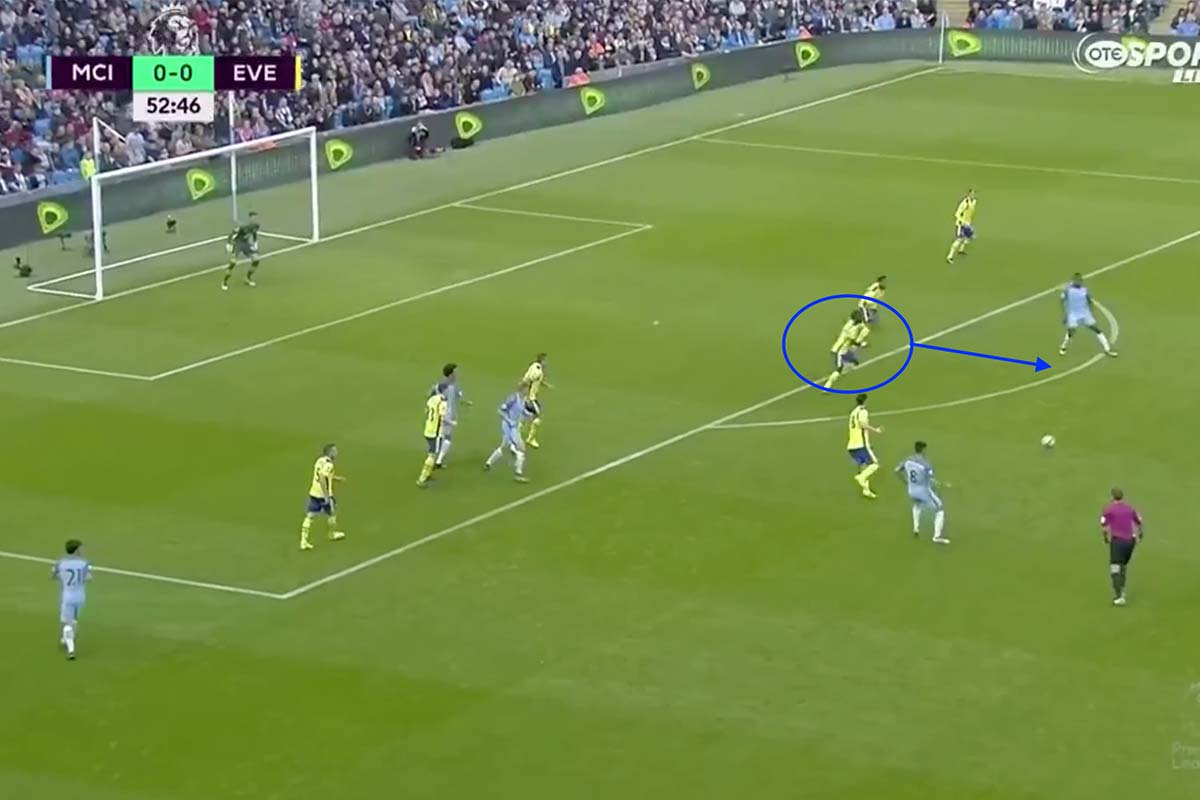 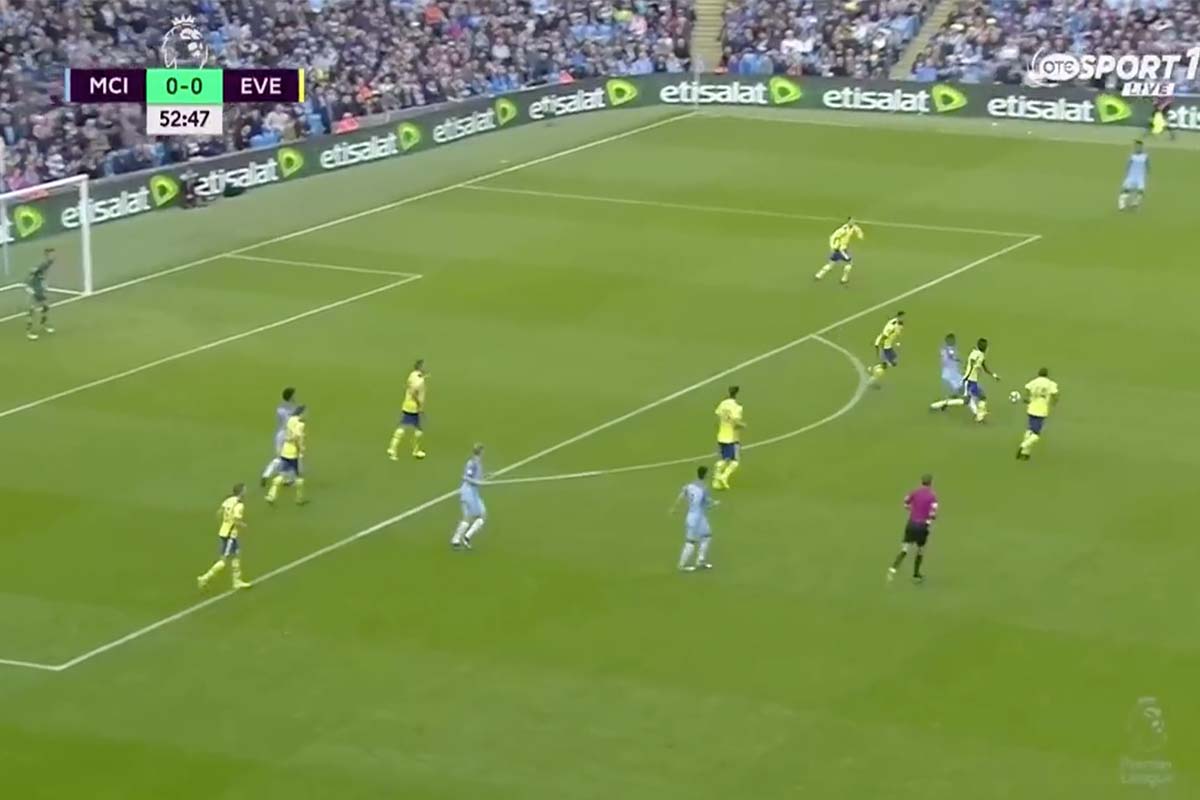 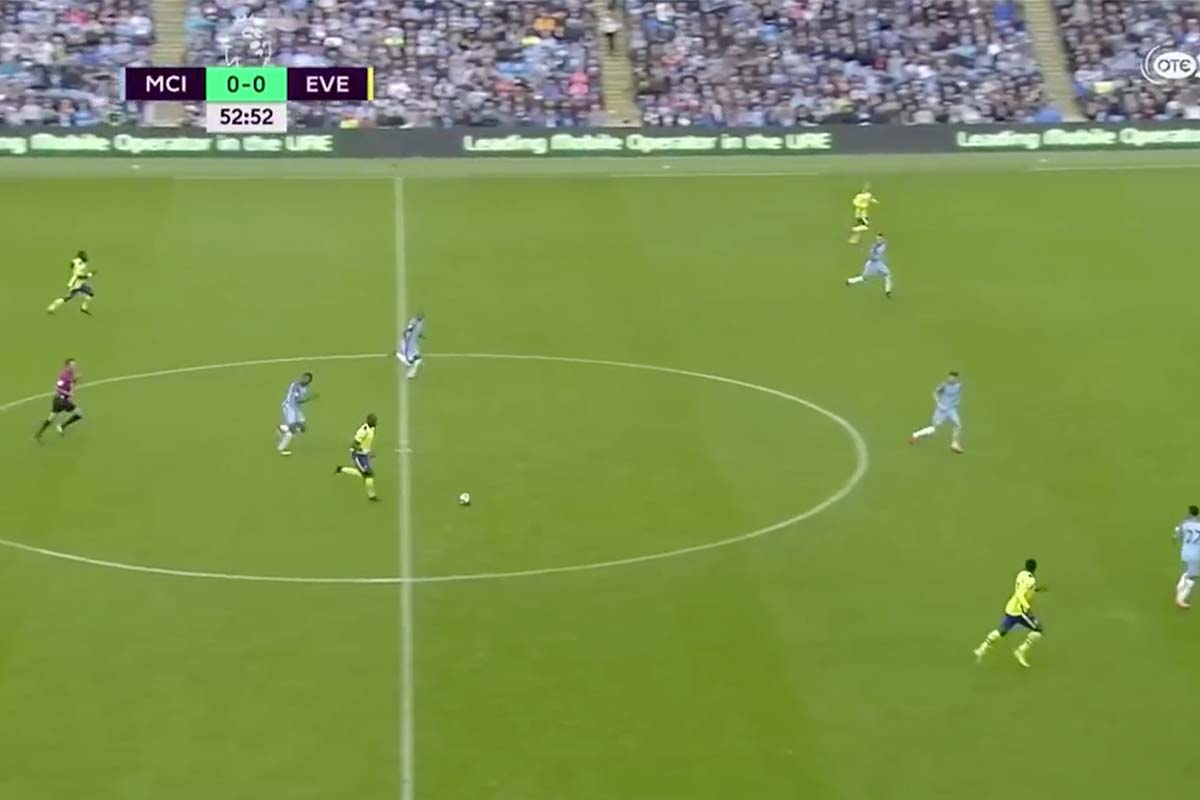 This time he highlights his anticpation, reading of the game and ability on the ball to tun defence into attack for Everton away at thr Etihad. In the first picture City are on the attack and Everton are deep in their own half. A ball is played across the penalty area and Gueye reads it, regains possession and drives into space. He then plays a pass to Bolasie and Everton are on the counter. Not satisfied with just regaining possession though, Gueye continues his run forward to make up the number for Everton. He’s not just a destroyer, he’s a well rounded box-to-box midfielder.

There’s been a lot of talk about new Everton owner Farhad Moshri looking to back Ronald Koeman financially and prying Gonalons from Lyon would be quite the statement, even if it doesn’t look like one on the surface.

The 27-year-old isn’t a world class player. He’s not going to be in any World XI’s. But he’s ideal for what Everton need and at the end of the day suitability is more important than reputation. With Gareth Barry coming to the end of his career Everton need a player to not only fill that void in terms of style but they need someone with experience too. Gonalons ticks both boxes having captained Lyon for years, winning Ligue 1 and playing in Europe. He’s wise beyond his years.

In terms of why it would be a statement? Well, Lyon owner Jean-Michel Aulas is notorious for being difficult to negotiate with. He names a price, a club meets it and he just hikes that price up. The versatile midfielder – who can play as a defender, a defensive midfielder, a box-to-box or as a playmaker of sorts – only has 18 months left on his current contract and now could be the ideal time for a team to make a move. 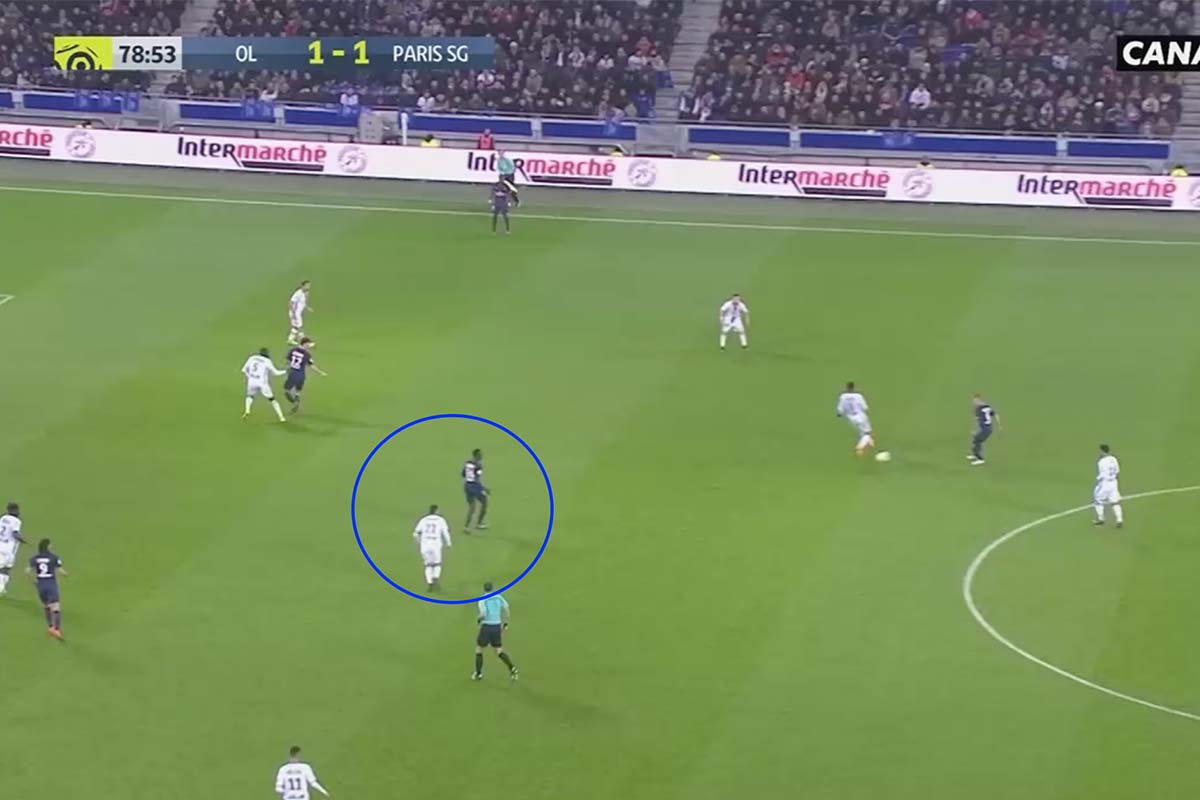 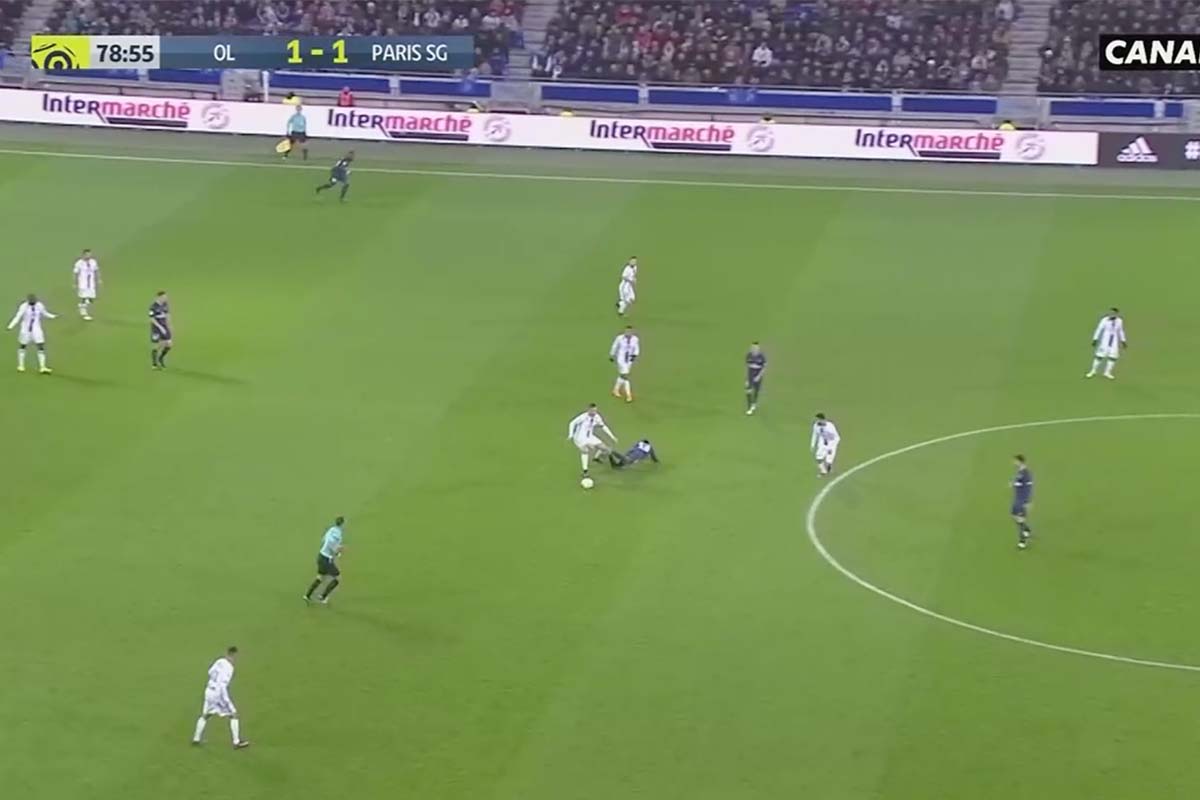 In the two pictures above you can see him patrolling the space in front of the back four. The ball is played into the PSG players feet and Gonalons just stops the attack dead. He presses the player, forcing him to go backwards, before dispossessing him completely and getting Lyon onto the attack. 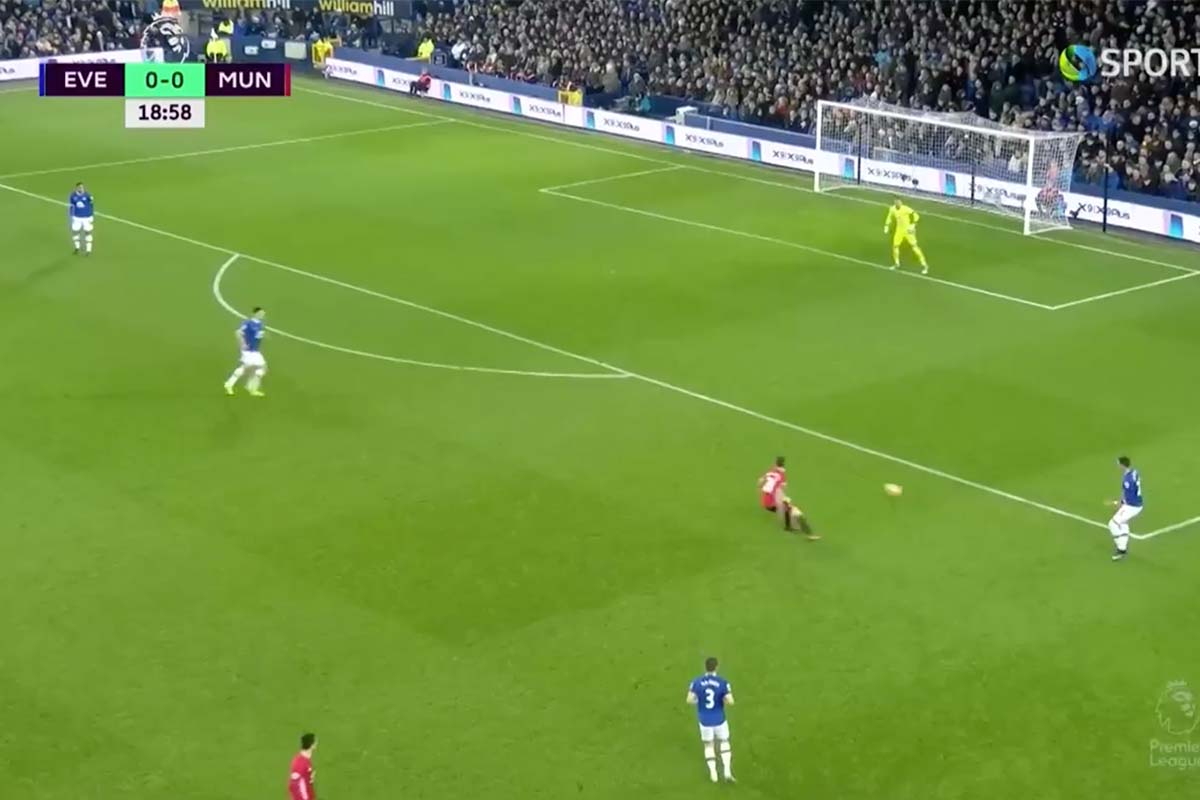 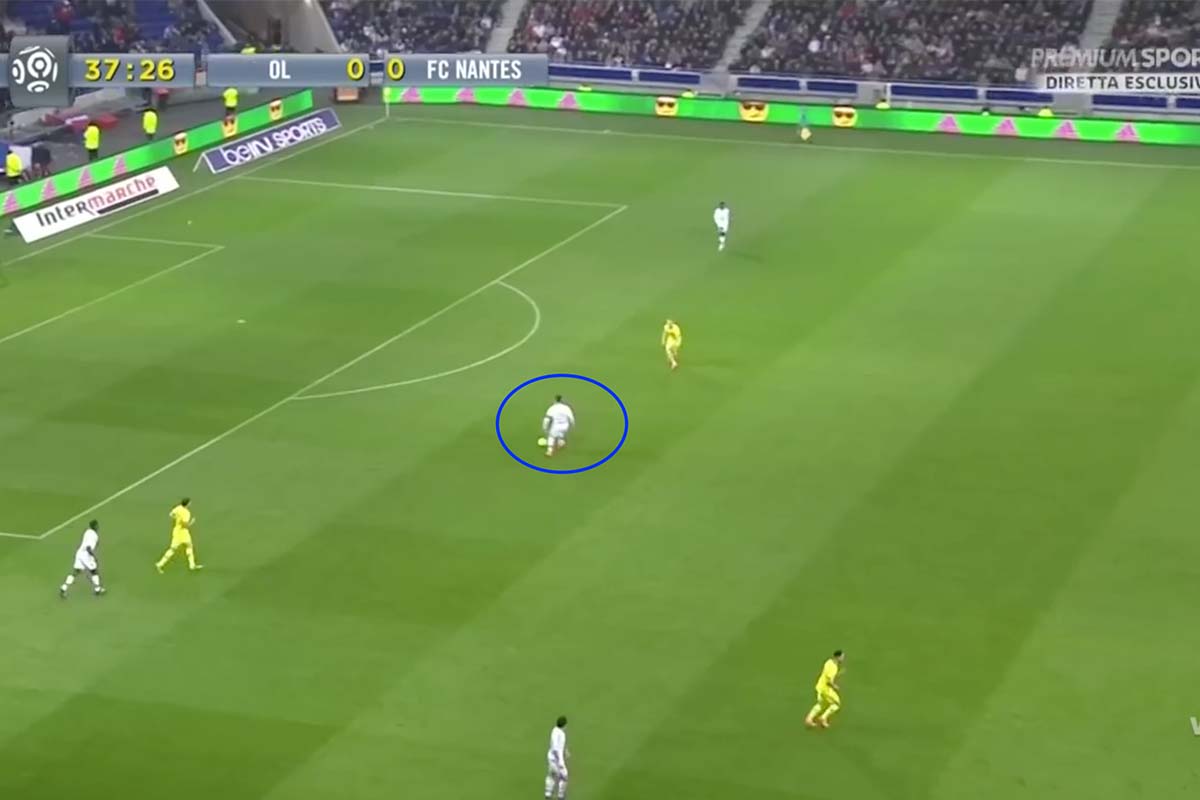 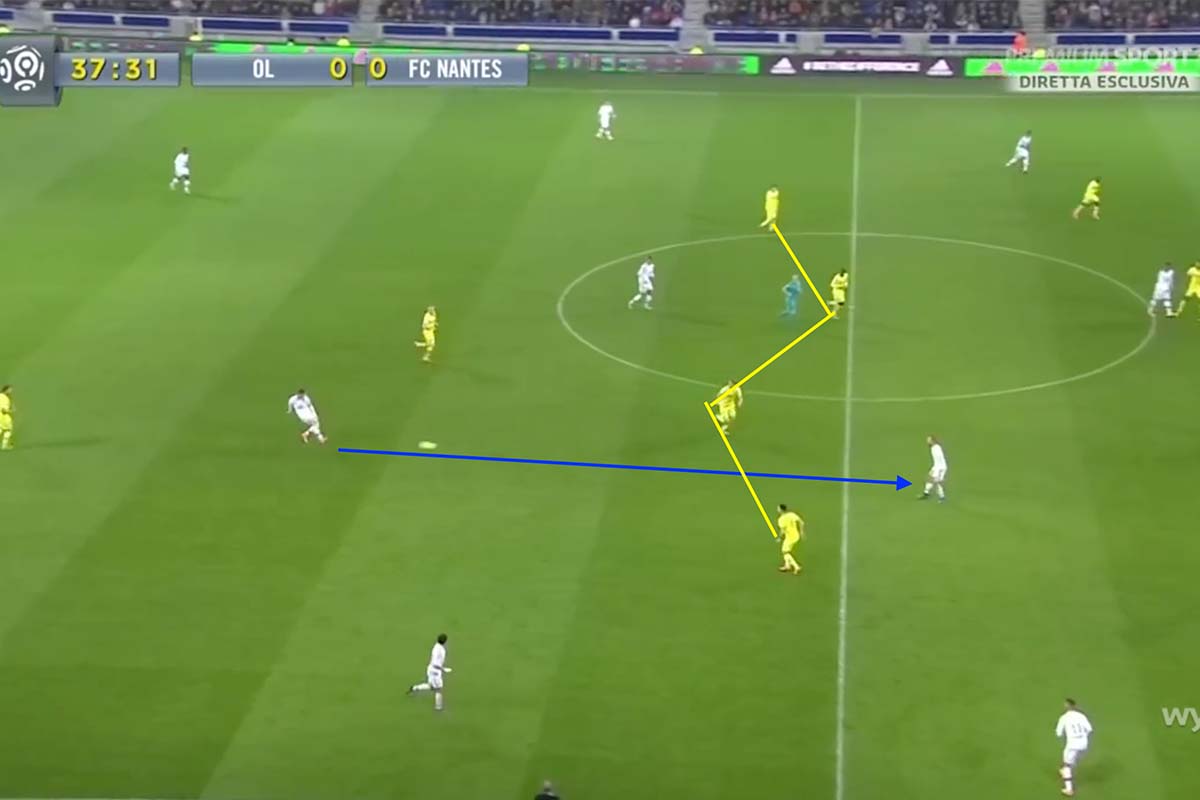 It’s his passing from deep that also catches the eye. In the first picture of the three above you can see how Everton start off some of their attacks. Gareth Barry drops between the split centre-backs and looks to start the play off. In the second picture you can see Gonalons dropping deep to occupy the space between the split centre-backs. The Lyon captain then spins on the ball and carries it forward before playing a pass to the feet of the Lyon man in the third picture. What’s good here is the fact he lets the ball do the work and isn’t afraid to play an incisive pass from deep. It’s a pass which cuts between the Nantes midfield and get’s Lyon straight at their defence. It’s basically a pass which takes out six players and get’s Lyon 4 v 4. 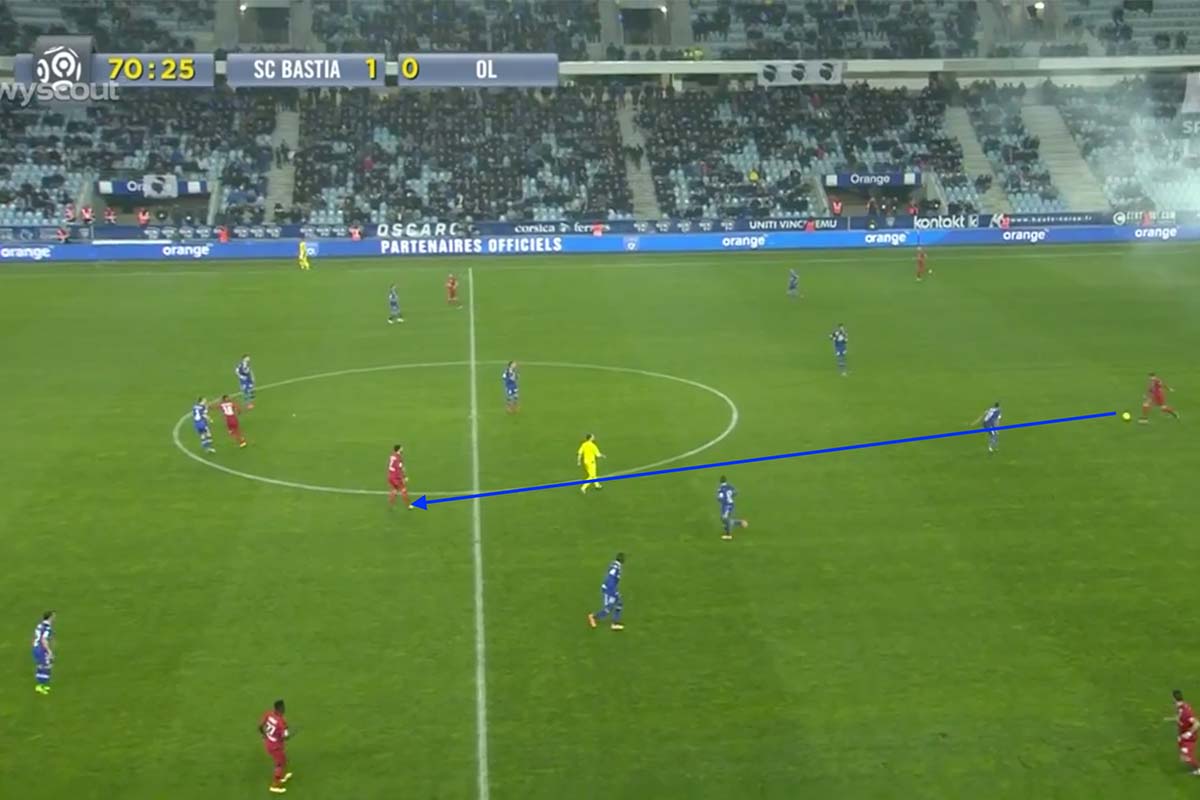 Gonalons again takes up a deeper role, the opposition look to press him and he just plays a pass straight to the feet of the Lyon player. Bastia go from having all ten outfield players behind the ball to having just the four men behind the ball with four Lyon players in behind the Bastia midfield. All because of one pass from deep. The ability to play passes like that which just bypass a press is becoming even more invaluable in the Premier League and is a weapon for any team.