Luis Suarez is out of form.

So claim the La Liga experts and Barcelona fans who have witnessed Suarez score just the one goal in his last five outings. He’s drawn blanks in matches against Granada, Manchester City, Celtic and Real Sociedad and this in turn has seen his explosive start to the season (8 goals and 3 assists in 8 matches) come to an abrupt end. In his last 10 matches he’s scored three goals and has 2 assists to his name. 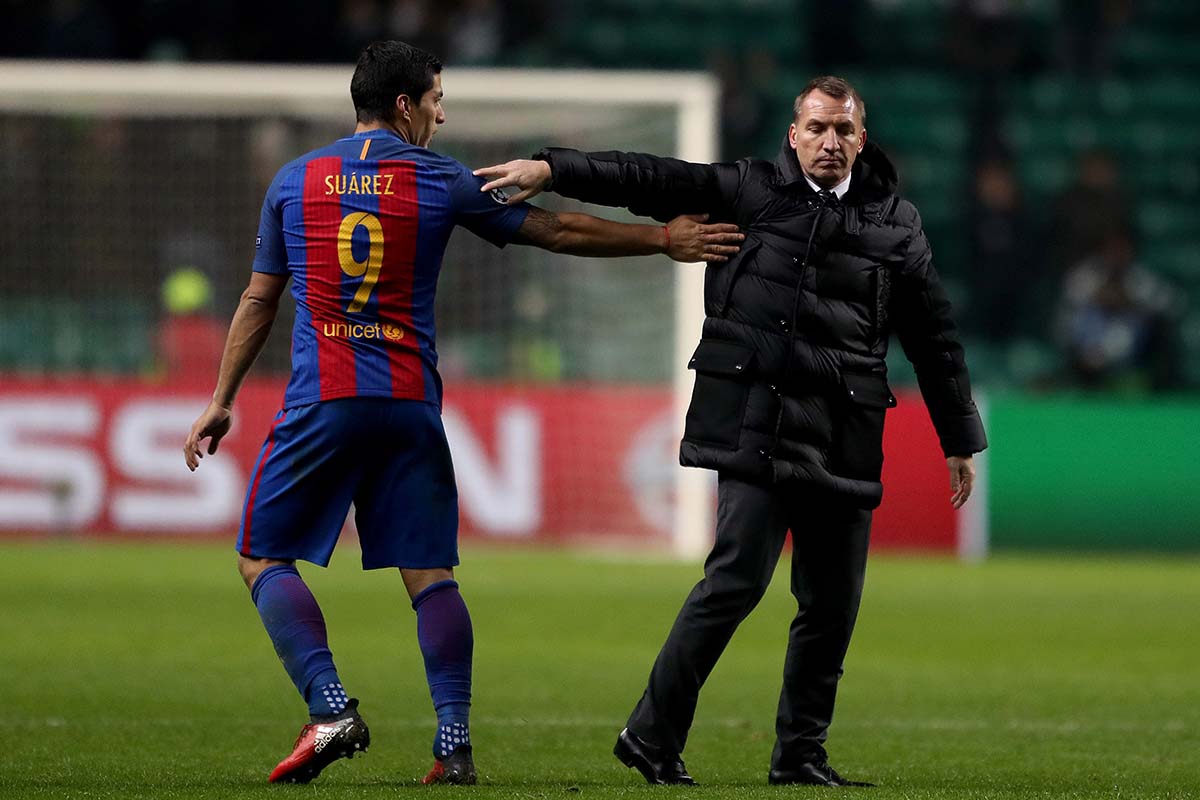 It’s by no means a barren run but for the world’s best number 9 it’s a bit of a drop off to what people are are used to. It also coincides with Barcelona’s patchy form with the team picking up injuries to Lionel Messi and Andres Iniesta. Barcelona lost against Pep Guardiola’s Manchester City, narrowly beat Sevilla (2-1) courtesy of a Suarez goal, beat Granada (1-0), Celtic (2-0) but failed to beat nine man Malaga (0-0) and were held by Real Sociedad (1-1). It’s almost as though he’s been made the scapegoat for this blip.

It’s not uncommon for this to happen though. As in an undeserving player gets made into a scapegoat. Fans have short-term memories and players get judged solely on the back of their last few performances. To them it’s irrelevant what Suarez did at the beginning of the season. It doesn’t matter that he’s missed chances throughout the season because it’s only important now that Barca aren’t winning, and even when they are it’s not as comfortable as they’d like it to be. If you scan social media people often follow the “he’s out of form” comment with “he’s missing loads of chances”. Which is harsh given the Uruguayan hasn’t actually been missing, as in not hitting the target. He’s been the victim of some fine, almost ridiculous at times, goalkeeping, some miraculous blocks and just some bad luck hitting the woodwork.

When in reality saying a player is out of form means they’ve gone completely off the boil whereas Suarez is still Suarez. Just without the goals. He’s still a nuisance to the opposition. He’s still taking up goal scoring positions, running himself ragged, created space for others and he’s still having an impact on the Barcelona attack. The fact he’s not scoring despite his performances isn’t sustainable. It used to happen with Suarez during his days at Liverpool. He would go on a run of games in which he’d create an abundance of chances and miss a shedload of opportunities. People would start to get frustrated with the maverick forward and then he’d score four of the most sublime goals in a single match to end his mini drought and you’d feel silly for ever questioning him.

This is a player who has scored 156 goals in all competitions in just 195 matches since the beginning of the 2012/13 season.

The floodgates are bound to open sooner rather than later. He has the perfect opportunity this coming weekend. Barcelona go into this weekend's match against Real Madrid knowing a loss to their rivals could see them fall nine points behind Zidane’s men. If results go against them Luis Enrique’s men could finish the weekend in 4th position and closer to 10th than they are 1st.

The pressure is very much on and Suarez is no doubt going to be fired up and netting against Real Madrid would be the perfect way to silence his critics. The Barcelona number 9 already has 3 goals to his name in the El Clasico and you wouldn’t bet against him scoring on Saturday. On Sky Bet he’s actually 7/2 to score the first goal and 5/6 to score anytime.

Back to the earlier claims though; is Suarez out of form? No. He’s just been unable to put the ball in the back of the net with the regularity that we’ve come to expect. In September, Barcelona hit Celtic for 7 at the Nou Camp. Suarez scored twice and grabbed an assist in the victory. In the entire match he attempted just the 29 passes and completed 72% of them. He had three shots with two of them on target. In the reverse fixture last week against Celtic he failed to score. He attempted 23 passes and completed 82% of them. He had two shots – one was on target and one clipped the post. Was he on form in one match but not in the other?