Much to Monaco’s dismay, Arsenal and Liverpool spent the summer chasing Thomas Lemar.

The French champions were ripped apart, losing Bernardo Silva, Benjamin Mendy, Kylian Mbappé and Tiémoué Bakayoko, but they were stubborn and steadfast in their determination to keep the France international.

Depending on who you believe, both clubs will say they were close to completing a £90million move for Lemar but, come the end of the window, the 22-year-old still called the principality home.

Interest in the attacker hasn't waned, however, over the last four months.

Liverpool and Chelsea have again been linked with moves, Arsenal too. Monaco remain adamant Lemar will not be leaving the club and they hold all the cards given he has a contract until 2020.

Despite knowing that Monaco won't want to do any deal worth less than the £90million they are quoting, The Times report that Liverpool are willing to bid £60million for the France international.

But is the Monaco star still worth the £90million it will cost to sign him? We've analysed his campaign so far in an effort to answer that question.

Is Lemar still worth £90million?

Monaco's £90million valuation seemed high in the summer but his potential, the fact the helped Monaco beat Paris Saint-Germain to the title last season, and Mendy leaving for £50million and Mbappé’s future £166million move to the capital, Lemar’s worth lies somewhere in-between.

This season, his performances have gone under the radar. Leonardo Jardim’s side are not dispatching teams as they were. Their Champions League group stage showing was abysmal, proving this is the first in a series of rebuilding years.

“It's cyclical,” vice-president Vadim Vasilyev admitted after their exit from the group stage was confirmed following defeat to RB Leipzig. “You have to respect the development and the progress of the players. Next year, we'll come into this competition better prepared than today.”

This season, Lemar has featured in 13 of Monaco’s 19 league games. Injuries haven’t helped. Coming off at half time against Nice with a hamstring issue, it meant he missed the next game and then appeared as a sub against Lille.

He was only getting back up to speed when a shoulder injury in November saw him miss five straight league games.

Lemar looked to be hitting form, picking up an assist against Troyes, then a stunning goal against Saint-Étienne for a much more positive December.

Named man of the match in the recent 2-1 win over Rennes, it feels like he is back to where he needs to be. Sadly for him, Ligue 1 broke up until January.

Four assists and two goals is a far cry from the impressive 31 goals he was involved in last term. But there’s more to it than just poor form.

Away from the injuries, Monaco’s struggles have been well reported. Last season they scored 107 goals in 38 games, out-performing their xG rating of 76.04.

Lemar posted far better figures than predicted, finishing with an xG of 6.24 and xA of 8.70. He actually scored nine times, adding ten assists.

If he keeps up the averages he set in the first half of the season, his xG and xA totals wouldn’t be far off what he managed last year. Given the injuries, there’s a chance he might not add as many goals. But he could easily outperform those numbers. 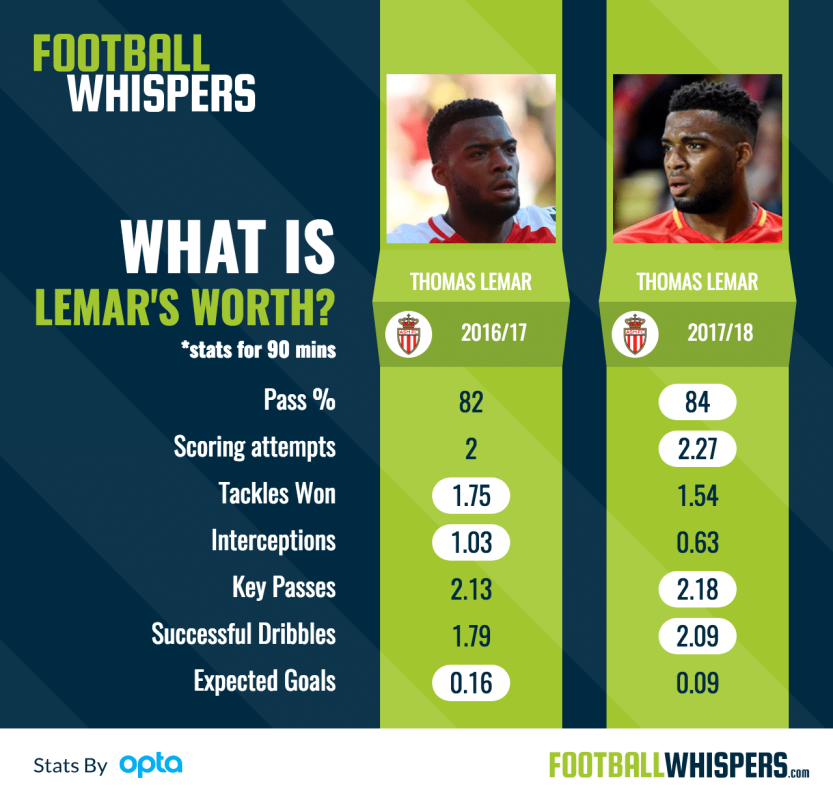 His pass accuracy is up to 84 per cent from 82, he’s completing more dribbles this season, up from 1.79 to 2.09 per 90 minutes, and is averaging an increase in scoring attempts.

Lemar is down in a number of categories, from tackles won, interceptions and chances created, but the drop offs are not as high as reports would have you believe.

In the recent win over Saint-Étienne, where he scored his second of the season, the change of direction he pulled off before the strike was an elite move from a wonderfully talented player.

Teasing the defender before switching the ball to his left and firing past Stephane Ruffier, the feint was so good he simply couldn't be stopped.

Still only 22 years old, there is plenty of time for Lemar to find consistency and continue to develop his game. He still possesses a tremendously dangerous left-foot and has the vision and weight of pass to crack open any defence.

Where does his future lie?

Arsène Wenger is a huge fan of Lemar and you sense the Gunners boss would enjoy working with a player with the potential of the Monaco man. However, as was the case in the summer, any move in January is dependent on Sanchez.

If the Chilean departs then Lemar could be heading to the Emirates – although the biggest issue would be whether Arsenal can convince the wideman that a switch to north London is the right move.

The Gunners are not playing Champions League football this season and are currently outside of the top four this term. Other suitors can offer greater assurances of their place in European football's elite competition, so Wenger would need to talk Lemar around.

Meanwhile, it's hard to imagine the midfielder in Chelsea‘s 3-5-2. He is strong enough to play through the middle and he would have licence to drift.

He could potentially be a replacement for Cesc Fábregas but it would be a big ask to move him into the centre of the Premier League midfield from day one.

Antonio Conte‘s 3-4-3 would have suited him better, playing just off the forwards. But with Eden Hazard and Álvaro Morata combining so well, it's hard to see the Italian reverting anytime soon.

Liverpool could still make a move with the money they gained selling Philippe Coutinho to Barcelona. Reds fans are eager for Jürgen Klopp to strengthen this month, with Riyad Mahrez and Gelson Martins mentioned as possible Liverpool transfer targets.

That could leave Arsenal's path clear, but Lemar would be cautious. Monaco is the best place to help win himself a spot in the Didier Deschamps' France squad for the 2018 World Cup. Moving this month would be a huge risk as he'd have to adapt to a new country and a new style of football.

Helping Monaco clinch Champions League football again and getting back to full fitness is much easier than settling and making an impact in the Premier League.

However, with the prices currently being paid, Lemar is worth close to £90million. It'll be intriguing to see if Arsenal, or Chelsea and Liverpool for that matter, will tempt Monaco into selling. this month.