Southampton’s new boss Claude Puel has been rightly praised for how his side have been performing lately. Disappointing end to their European tour aside, both manager and players have coped well with this transitional period. At both ends of the pitch they’ve impressed. Only Spurs and Chelsea have conceded fewer goals while up the other end Nathan Redmond has adapted to life well as a striker. It’s not all rosy though.

The Saints have one of the best defensive partnerships in Europe and it’s not went unnoticed. Both Virgil Van Dijk and Jose Fonte are in demand with the likes of Chelsea, both Manchester clubs, both Merseyside clubs as well as teams from abroad showing an interest. But to the surprise of many, the club itself are only intent on keeping hold of the former. Jose Fonte, the club captain, took to social media at the beginning of December to inform fans that the club would not be offering him an extension despite the fact he has just 18 months remaining on his current deal.

“Just to set the record straight I did not reject a new contract. In fact I have been informed by Southampton that they are not offering me a new contract. My focus is on Thursday [against Hapoel Be'er Sheva in the Europa League] helping us win the game.”

It’s a subject which dominates the thoughts of both fans and neutrals.

A man who has been one of the few constants for Southampton. He’s impressed under various managers alongside countless partners playing in different leagues. He’s being let go without much a fight from the club despite his form not dropping. Southampton, who have excelled in player recruitment in the past, now have the unenviable task of replacing a club legend. Clever profiling is going to be key and it’s with this in mind the club may turn to Spurs centre-back Kevin Wimmer. 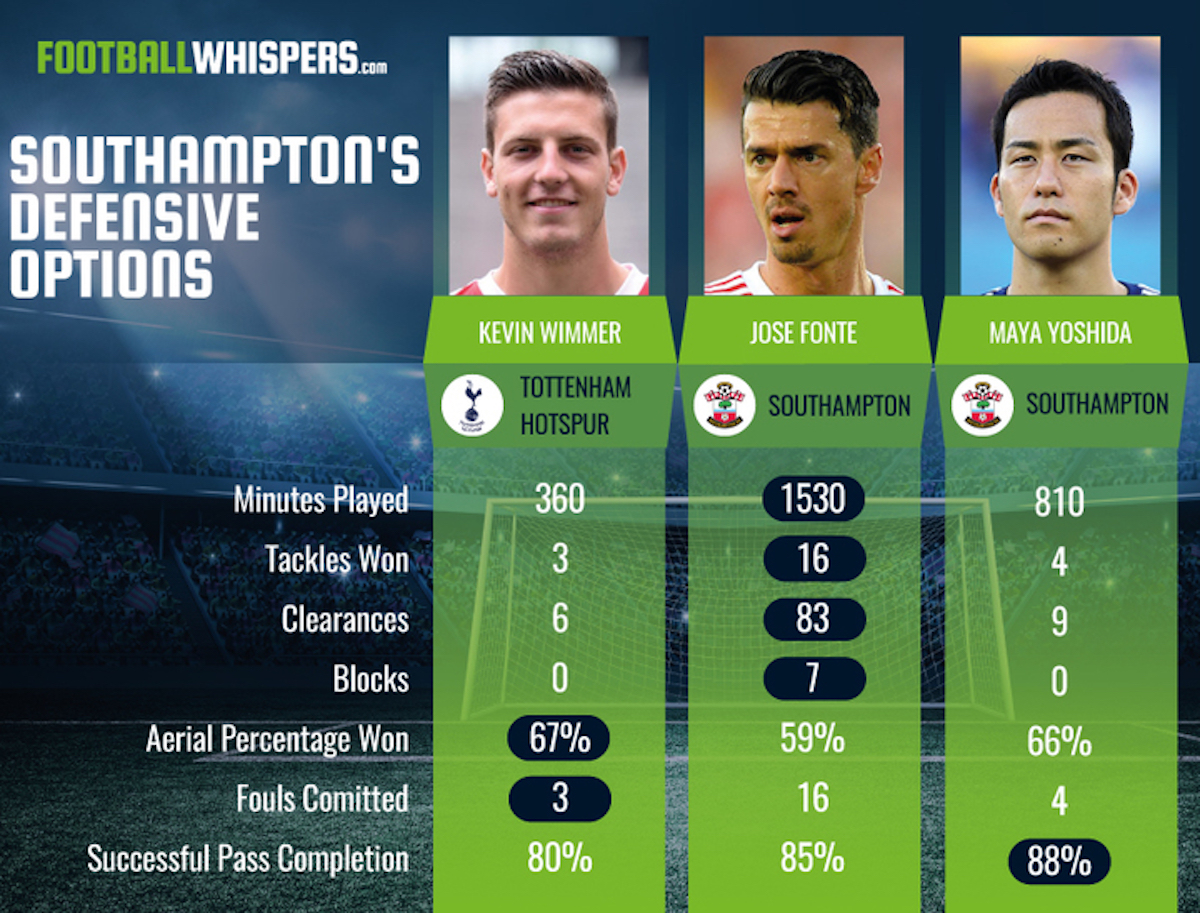 The 24-year-old is behind Jan Vertonghen and Toby Alderweireld at White Hart Lane and there has been talk that he’s potentially interested in a move in an attempt to secure first-team football. It may not be the most glamourous of moves but Southampton tend to opt for suitability and not reputation. To fully appreciate why the Spurs centre-back could be a potential target you need to appreciate what Fonte brings to the system at Southampton.

What does Fonte bring to the team?

When you think of the Portuguese international you think of a calm, composed, imposing, intelligent leader who manages to merge traditional centre-back values with those of a progressive centre-back. He knows when to play out from the back and when to simply get rid of the ball. It’s a fine art and one that’s lost on some modern day defenders. He’s aerially dominant and over the past four and a half seasons, on average, he’s won 2.3 aerial duels per 90 minutes. Over the same time period he’s completed 82.7% of the 49.8 passes he attempts as well as winning 1.7 tackles and making 2.3 interceptions. He’s consistent and he’s reliable.

For all the plaudits that have gone his way over the years, one of the most underrated aspects of his games is his passing ability. 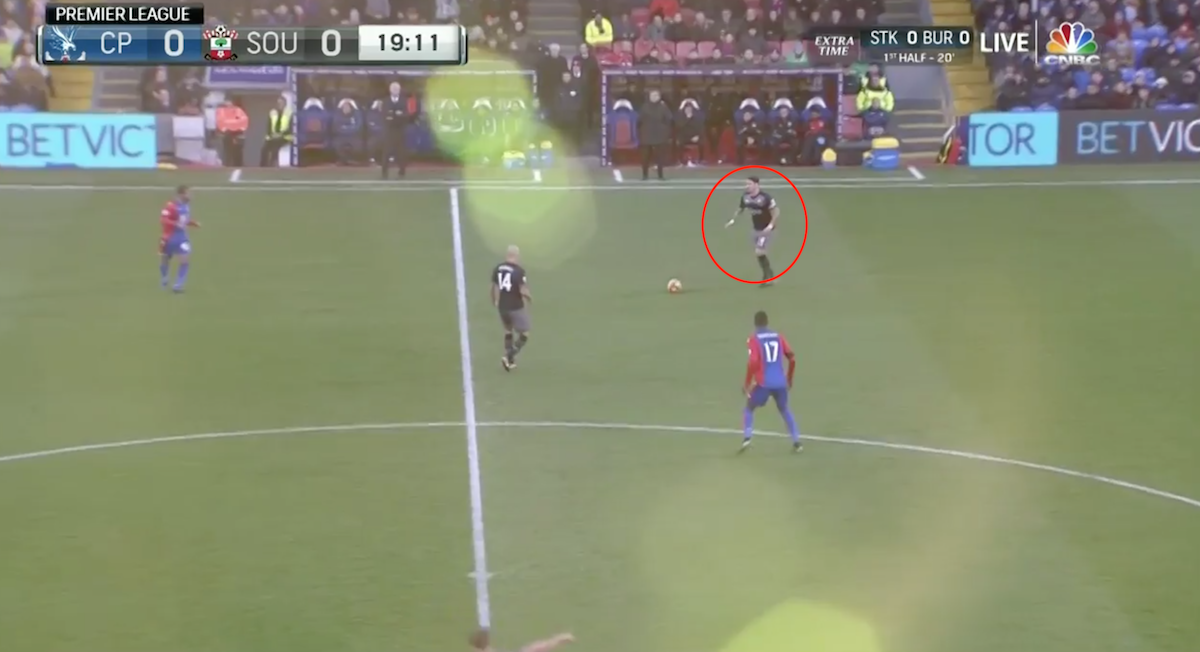 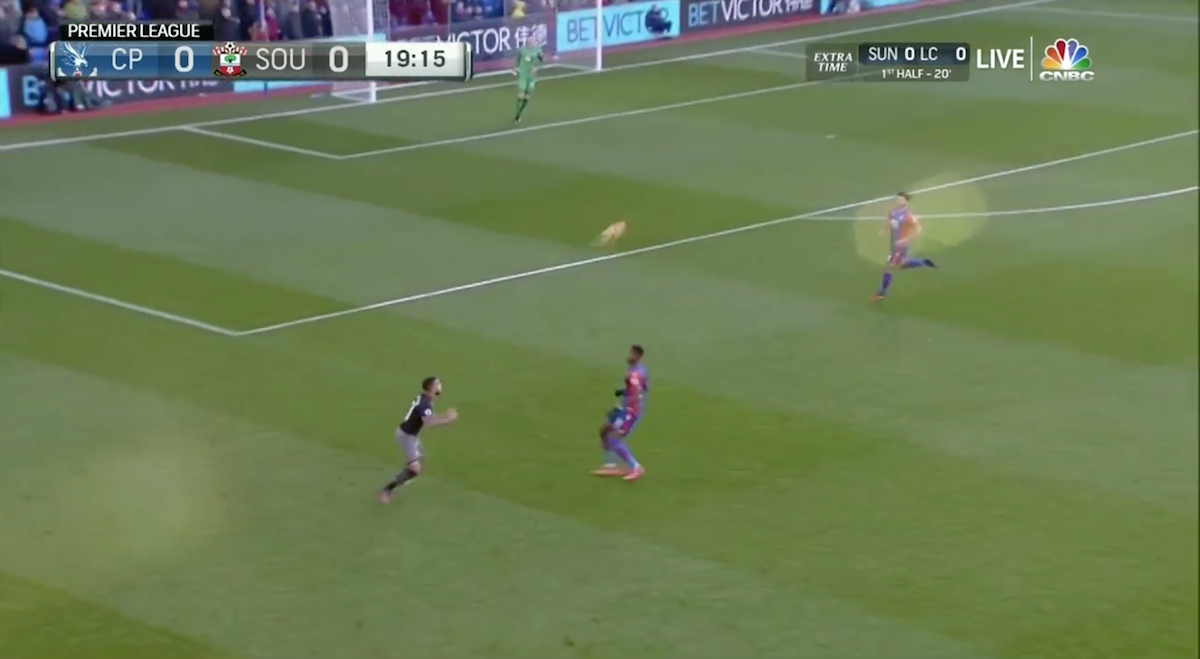 In the first picture you see Fonte in possession. There’s no easy pass on with Palace looking to put pressure on Southampton as soon as they look to enter their half of the pitch. The home side have men behind the ball and are looking to make it difficult for Southampton to play. With the away side playing a diamond it means the width comes from the full-backs. In this instance Fonte spots Ryan Bertrand making a run down the left and switches the play. It’s a pass that stretches the Palace defence with the right-back pushing over to support Zaha. Sometimes a switch like that is enough to disrupt a disciplined side and holes appear. 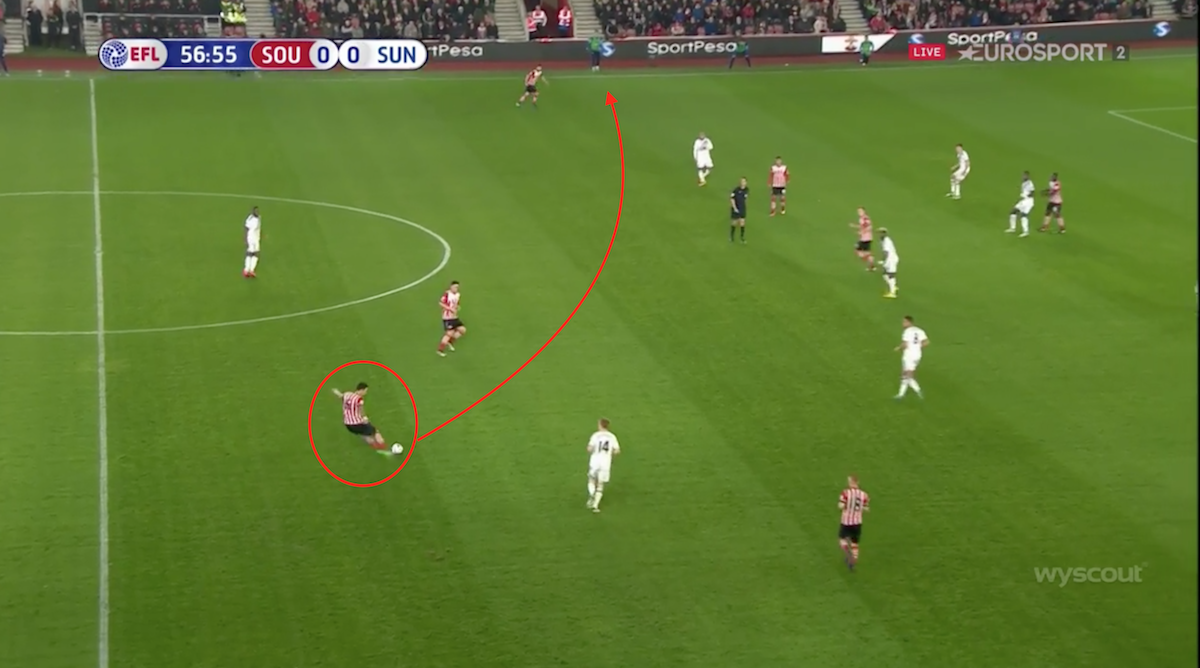 Again in the picture above you see Fonte switching the play against a narrow, compact Sunderland side. The away side sacrifice the width in an attempt to clog up the middle. If the buildup is slow when looking to exploit the wings Sunderland will be able to get across but if it’s a quick switch, like in the picture above, it’s harder to defend against because even though they’ve given Southampton the wings, they don’t want the home side getting crosses into the area without pressure on them.

It’s hard to find a centre-back with the ability to execute such long-range passes with the game now siding with much shorter, precise passes. It means many don’t have the accuracy required to pull off these passes on a regular basis but Wimmer has this in his locker. 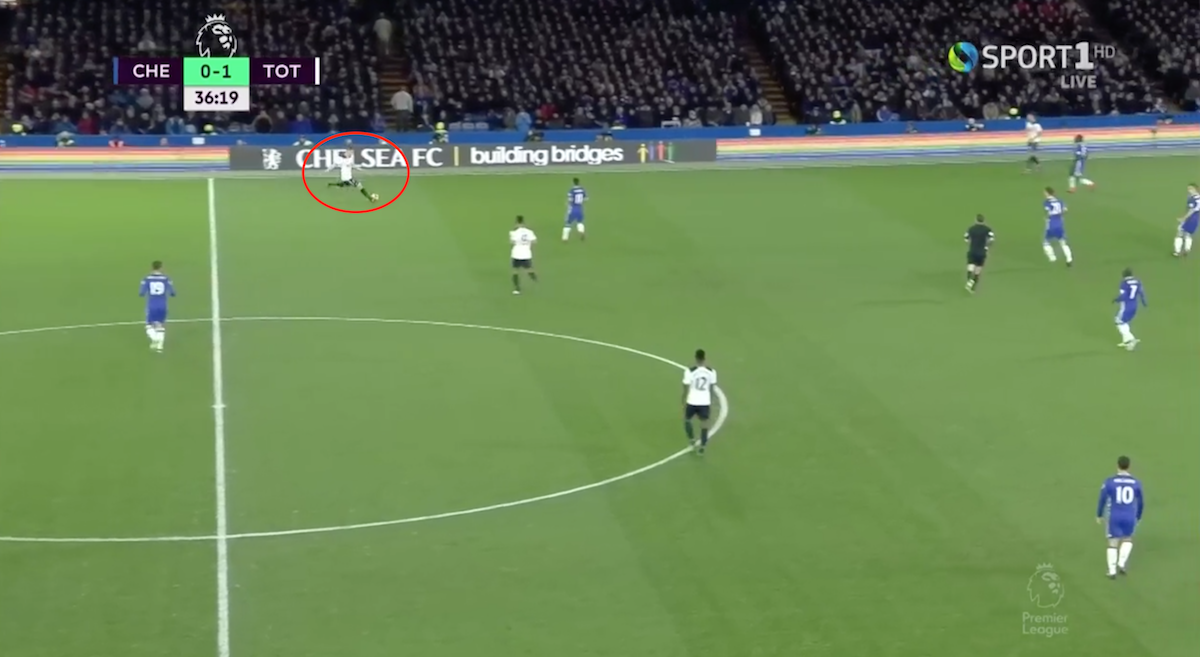 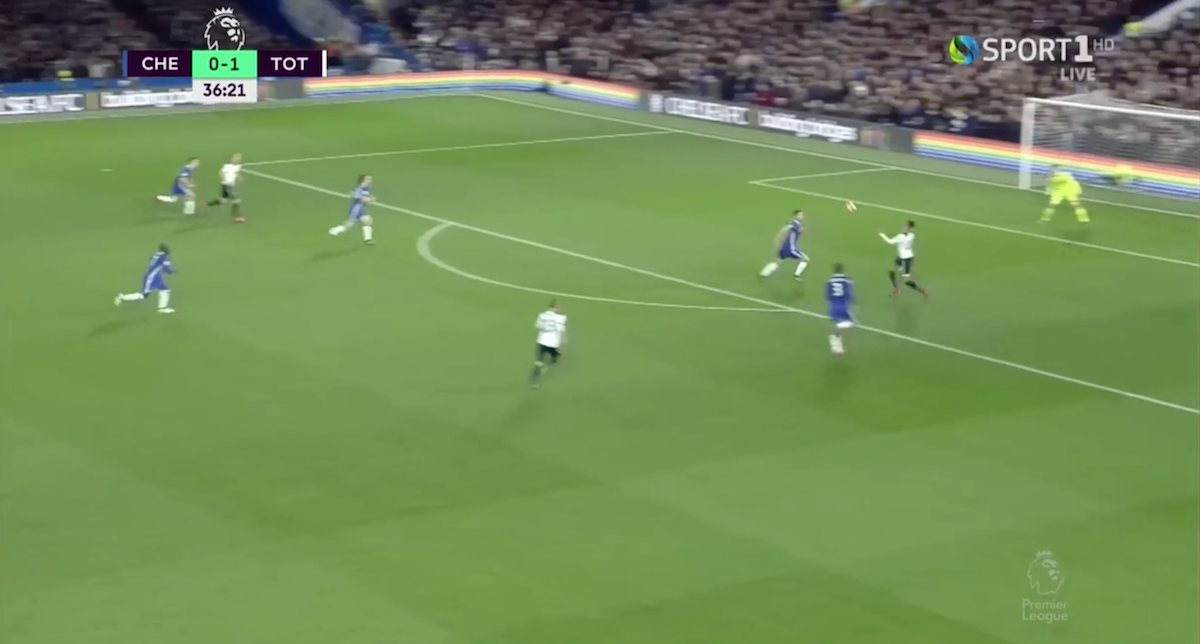 Wimmer showcases his vision and ability on the ball in the picture above taken from the defeat to Chelsea. A well organised and insanely disciplined Chelsea side, who don’t let teams get in behind, were caught out by a superb ball over the top from the Spurs defender which was timed to perfection for Dele Alli’s run. In the first picture you can see the Chelsea shape but the pass over the top finds Alli 1 vs 1 against Cahill. Unfortunately for Spurs, the England international couldn’t bring the ball down under his spell and Chelsea managed to get the ball away. 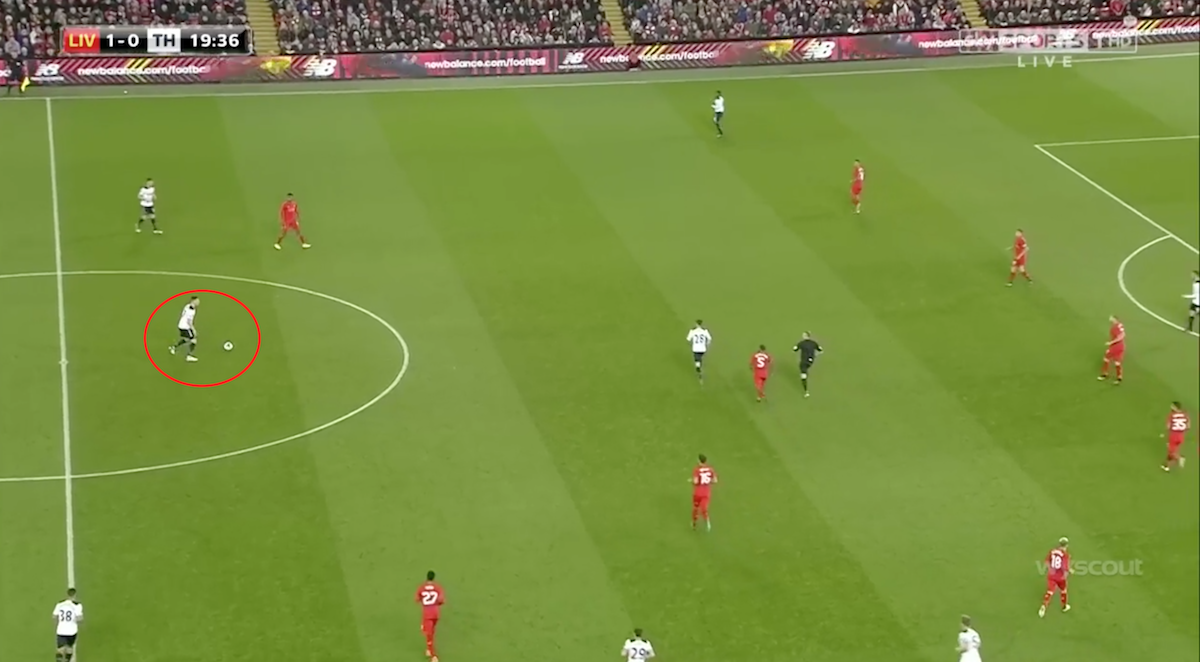 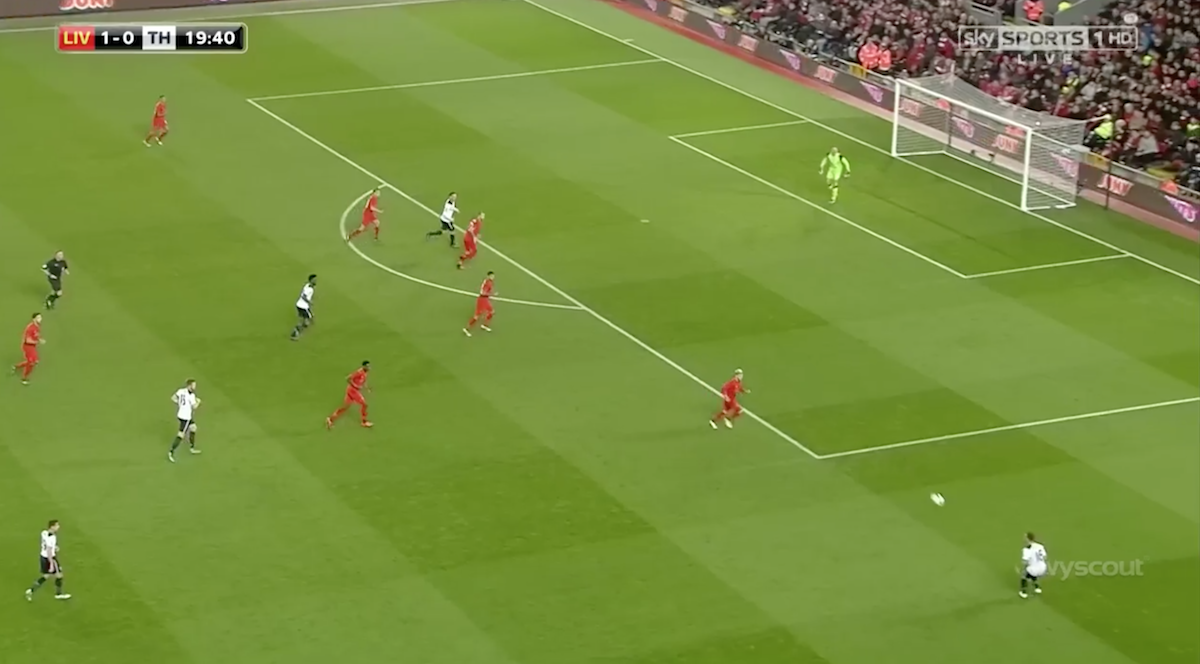 Against Liverpool, Wimmer was afforded a lot of time on the ball. In the first picture you see there’s not really an easy pass on for the Spurs centre-back. However, spots the space in behind Liverpool left-back Alberto Moreno and sees a Spurs man making a run forward before making the diagonal pass. It’s well weighted which enables his teammate to bring the ball down in plenty of space and Spurs can get the ball into the penalty area.

Due to Wimmer not playing regularly for Spurs, the sample size when looking at his stats is too small to really read into properly. However, looking at averages for his time at Spurs and Koln combined you get to build a picture of sorts. He makes 1.3 tackles and 1.6 interceptions as well as winning 2.3 aerial duels per 90. Of the 51.1 passes he attempts he completes 79.6% of them. Look past the stats and you will see he’s an intelligent, aggressive, proactive defender who reads the game well who is ideally suited to a well balanced Southampton side. 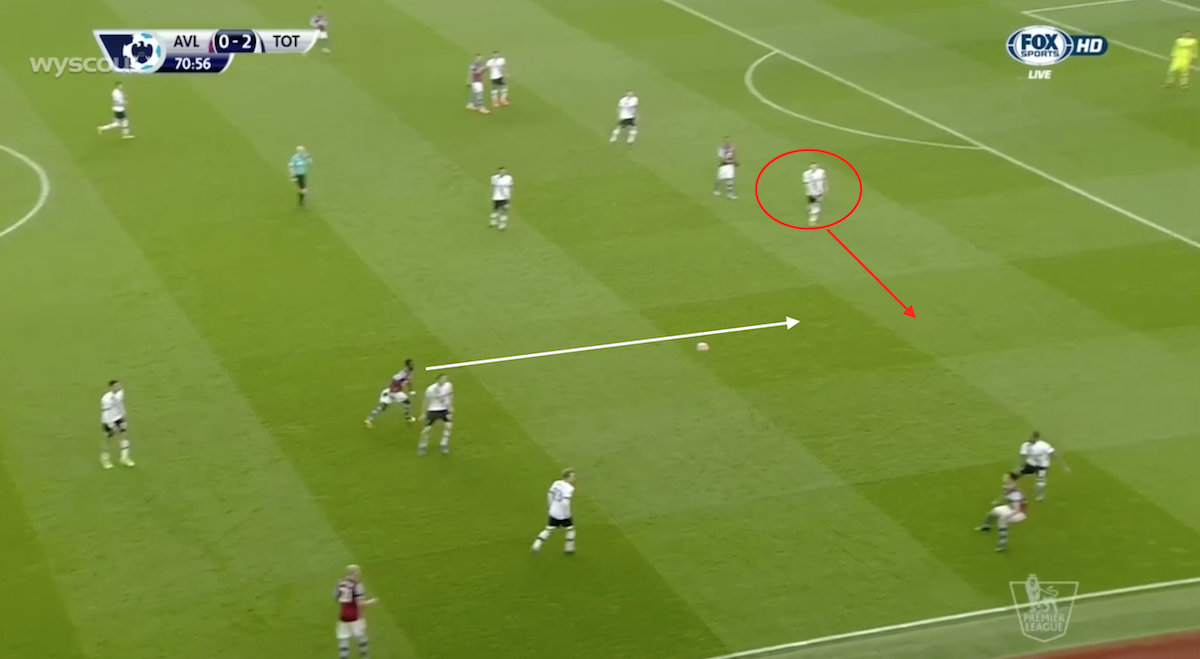 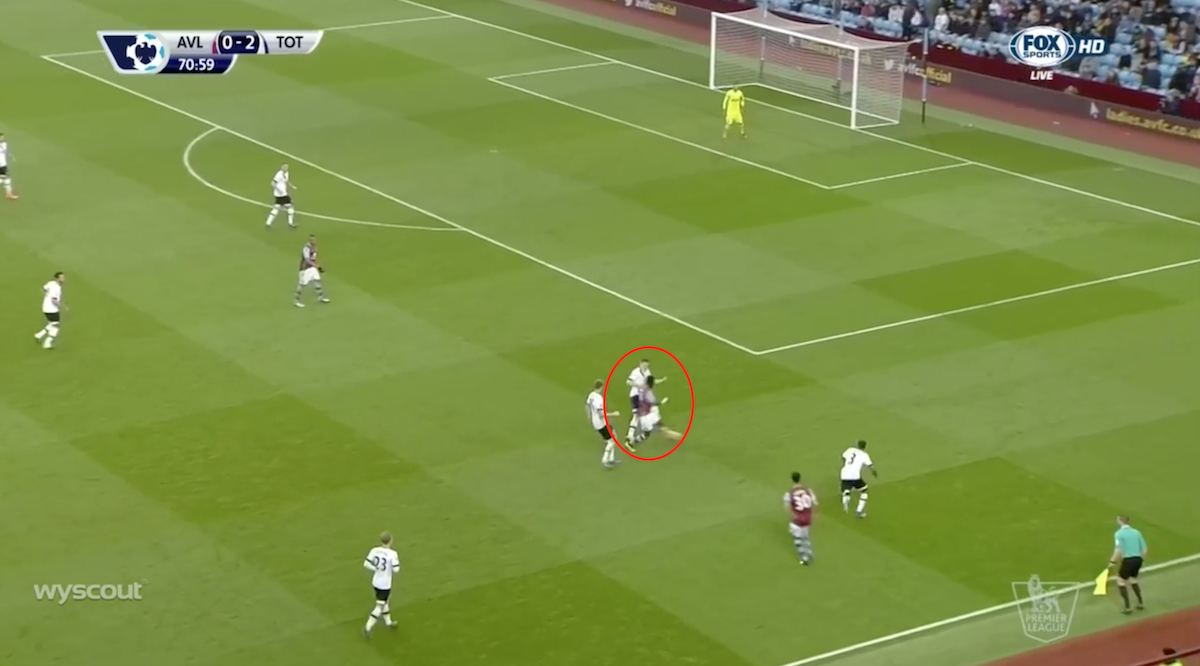 In the two pictures above you see Wimmer’s reading of the game. A lot times in the Premier League you’ll see large spaces appear in a defensive four and the defence don’t respond accordingly and then it all comes down to recovery speed. He see’s the Villa man running off the back of the Spurs midfield and anticipates the potential danger. He wins the tackle and puts the ball out of play. Just a couple of his strengths are his positioning and his anticipation.

At 24-years-old there is a lot of room for growth and he’s still nowhere near fulfilling his potential. A club like Southampton could really help him grow as a player. Southampton could take advantage of Spurs being caught up in looking to keep Vertonghen and Alderweireld at the club.