After missing out on a host of different strikers this month, Chelsea have reportedly turned back to the man that was at the top of their wish list in the summer; Fernando Llorente.

The Blues wanted the bring the Spaniard to Stamford Bridge from Swansea City in August but failed to submit a high enough offer and he completed a move to Tottenham Hotspur instead.

Llorente has since made 20 appearances in all competitions for Spurs, but only seven of them have been starts. He has also found the back of the net just twice.

However, he remains capable back-up to Harry Kane and Tottenham will not be willing to let the 32-year-old depart unless they make significant profit on the £14million they paid Swansea.

Given Chelsea baulked at his £14million price tag in the summer, it's unlikely the Blues will be willing to spend big money to prise him away from north London.

But given their wild chase for a striker throughout the transfer window, perhaps a last-ditch attempt to sign Llorente is on the cards, especially as he fits Antonio Conte's tactical system far more than Mauricio Pochettino's.

Not so long ago Llorente was one of the most in-demand strikers in Europe. He was part of an Athletic Bilbao side which terrorised teams in the Europa League.

You could say the success went to his head and, after he made it clear he wouldn’t be signing a new deal with the Basque club, he was relegated to the bench for the majority of his final campaign in Spain.

He joined Juventus on a free transfer and impressed during his debut campaign with 16 Serie A goals and five assists. A disappointing second season in Turin saw him score seven times and finish with just a single assist.

An offensive rejig under Massimiliano Allegri resulted in Llorente returning to Spain with Sevilla and playing a bit-part in both the league and Europe. He then joined Swansea for a reported £5million in the summer of 2016.

There was a misconception that he was past it and that he’s nothing more than a Spanish Andy Carroll — that, if you’re able to limit his ability to impact the game aerially, he offers nothing.

That was quickly proven untrue. Llorente is a monster in the air but that doesn’t detract from his strengths both on and off of the ball. 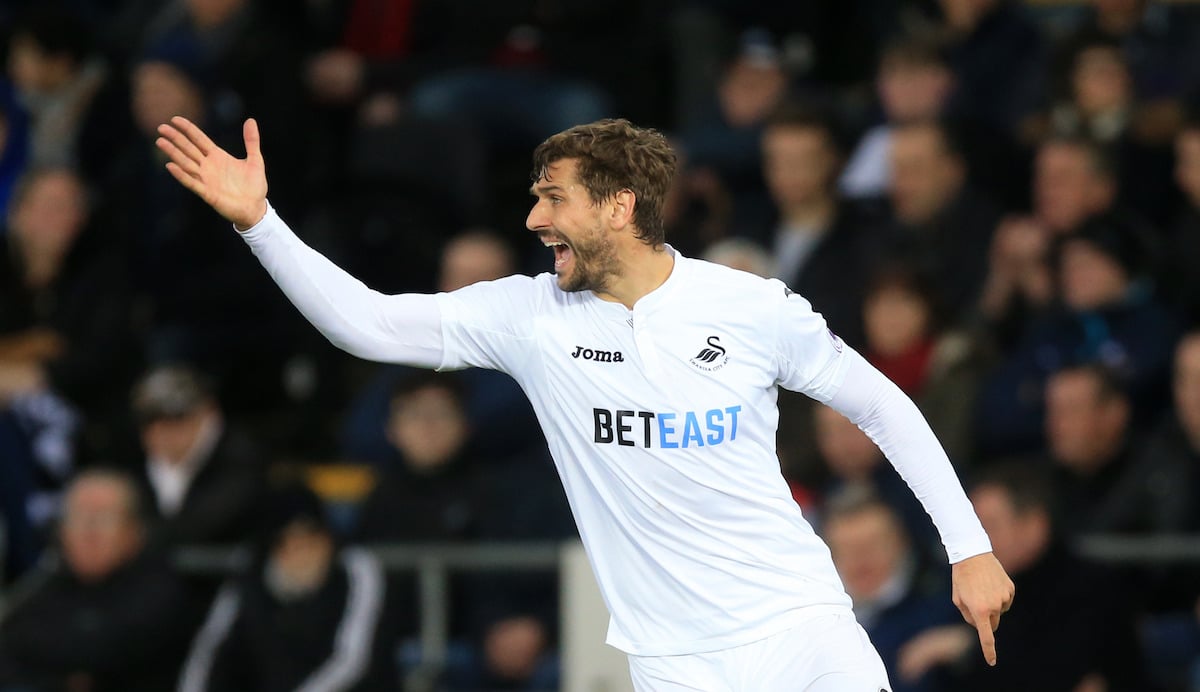 Llorente finished last season with a thoroughly impressive return of 15 Premier League goals in 33 appearances for the Swans, showing that with limited opportunities he is still able to produce the goods.

While some may point to his disappointing return at Spurs and his uninspiring performances, it's hard to criticise the former Spain international given his lack of game time and that Tottenham don't play to his strengths.

Conte, perhaps more than any other quality, demands hard work from his players, no matter their position on the pitch.

It's why during the majority of Chelsea games this season the Italian has been barking instructions at Àlvaro Morata, encouraging him to close down opposition defenders.

Llorente would be expected to do a similar job if Chelsea were able to pull off a deal, but is he suited to it? 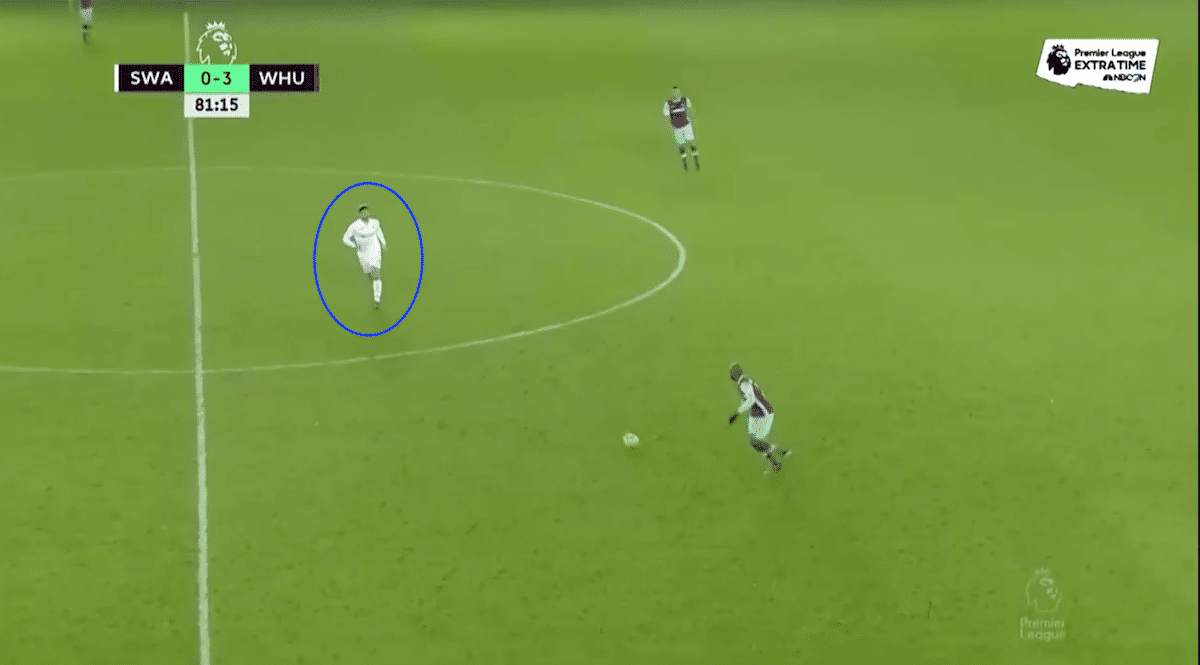 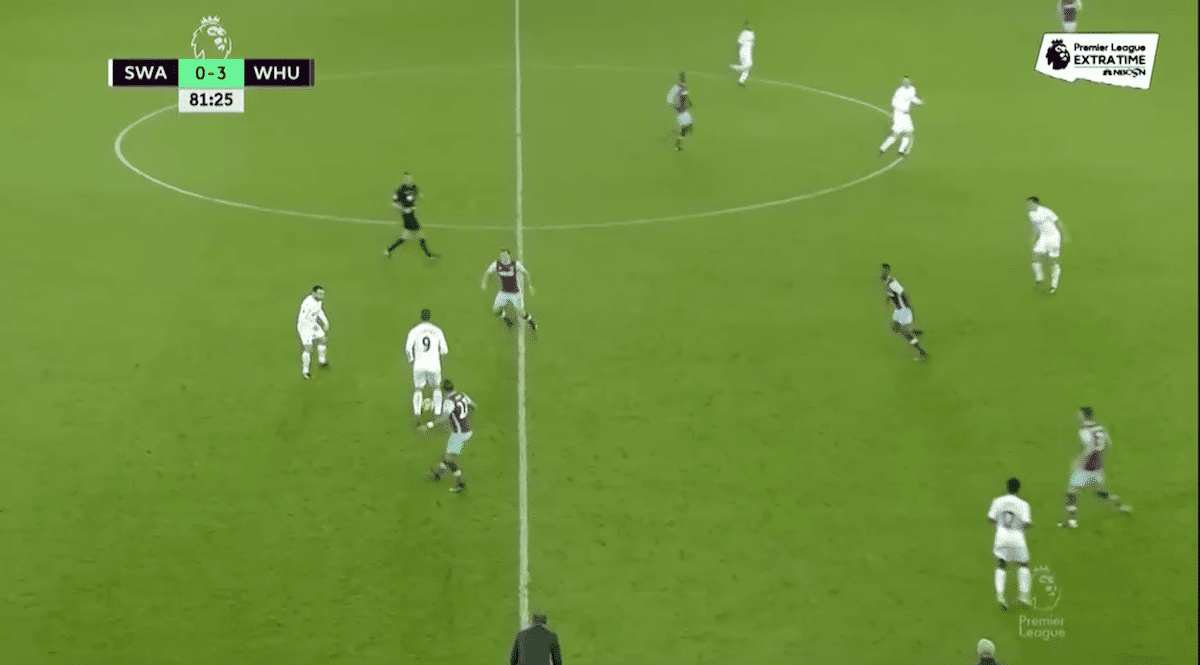 In the above two pictures taken from his time at Swansea, you see Llorente’s workrate. West Ham United look to build from the back and Angelo Ogbonna plays the ball to Dimitri Payet.

The former Swansea No.9 harasses the Frenchman and eventually regains possession and puts an end to the attack.

It’s not something many think of when Llorente is mentioned but it’s definitely a trait of his. 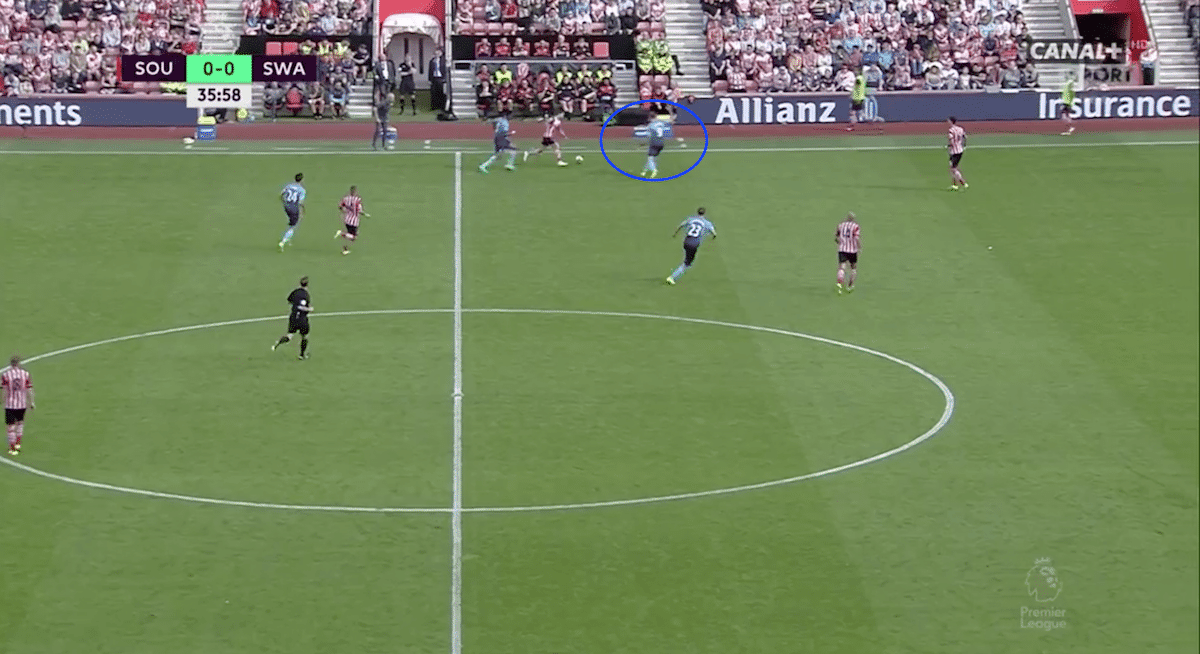 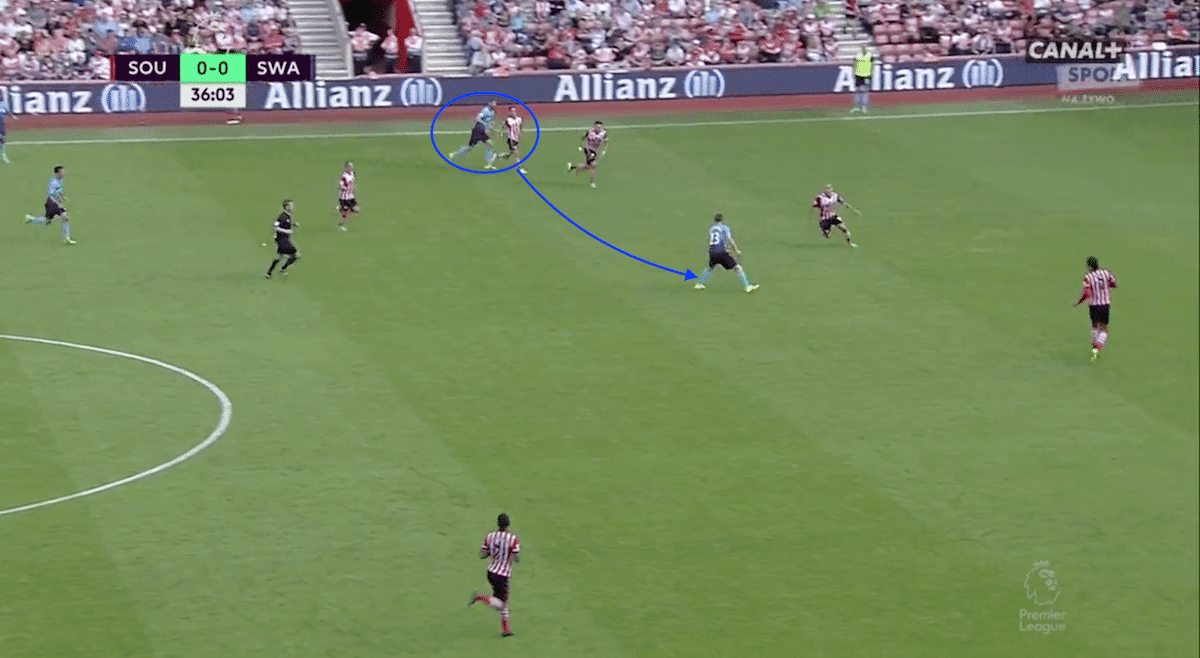 This time against Southampton. Llorente presses the centre-back before following the ball which enables the away side to effectively double up over that side of the pitch before winning possession back.

He then plays a pass to Gylfi Sigurdsson in the second picture and continues his run forward before the move peters out.

Morata is similar. He works the channels, closes down the opposition’s full-backs and that allows his team-mates to make the most of the space centrally.

Llorente’s Ability to Bring Others Into Play

Holding the ball up and bringing teammates into play is the weakest part of Michy Batshuayi's game, and arguably why Chelsea have been so desperate to bring in another frontman this month.

Having a strong striker who is able to hold the ball up is crucial to how Chelsea attack. It's something they've lacked without Diego Costa as Morata isn't as adapt to battling defenders and keeping the ball. 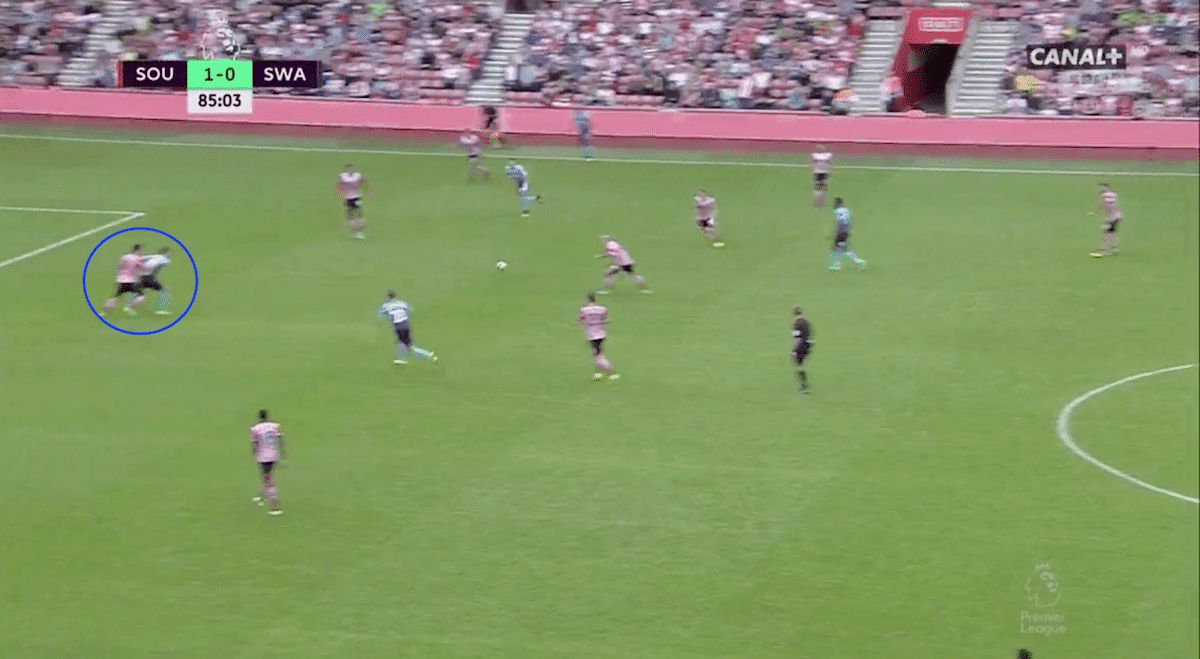 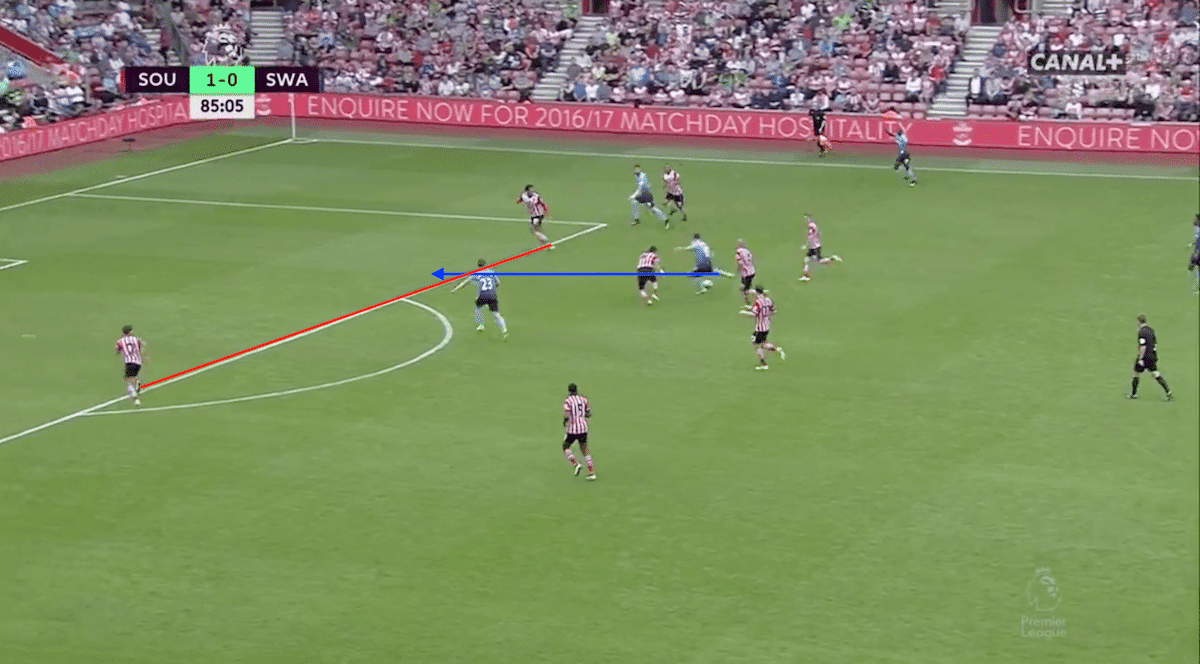 Llorente can, however. In the pictures above you see him receive the ball to feet with his back to goal.

He then shrugs off the defender who had gone with him in an attempt to pressurise him or potentially intercept the ball, and he plays a pass to Sigurdsson who has made a run into the space the Spanish forward has created. 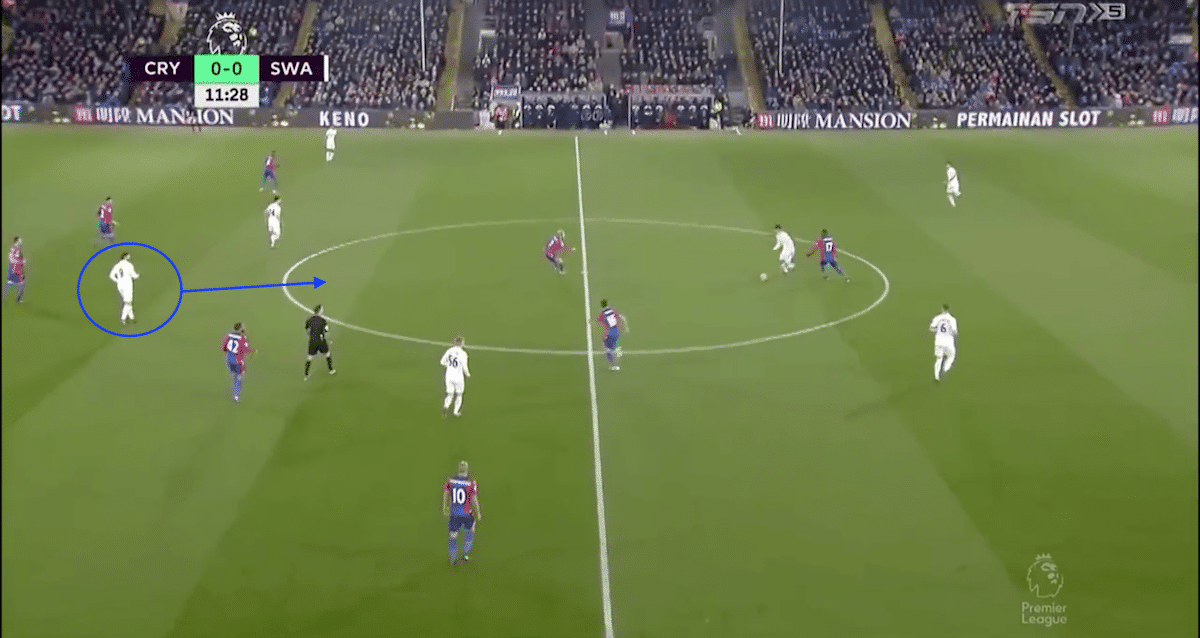 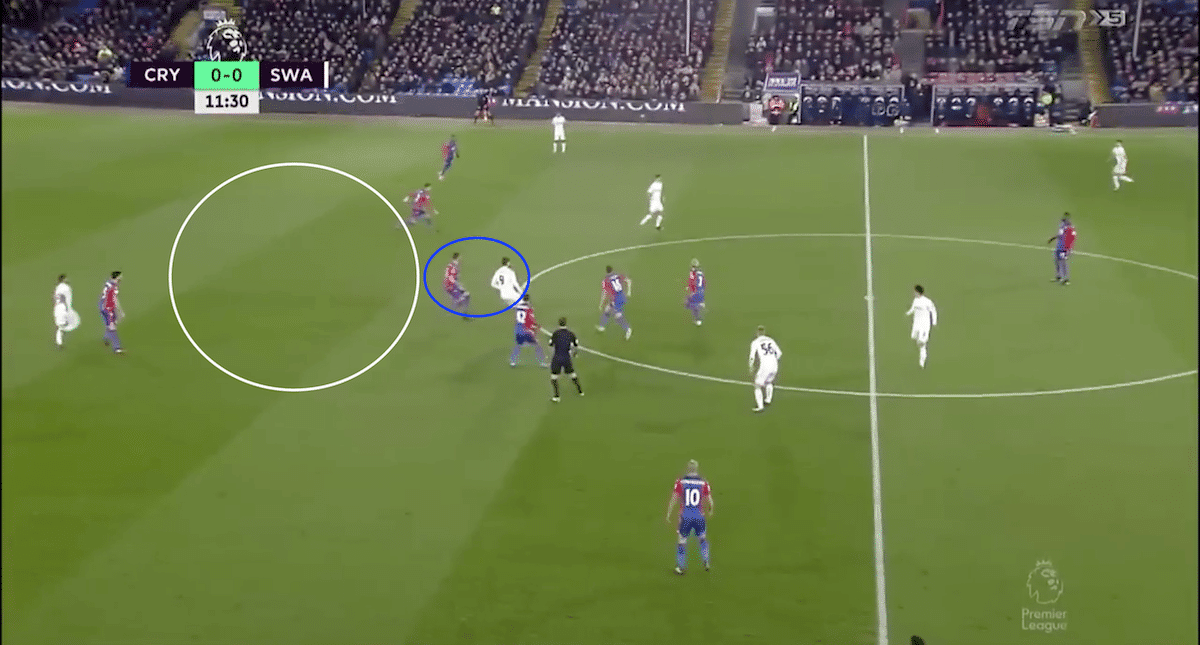 In the two pictures above you see Llorente’s positional awareness. He drops deep to receive the pass off of the Swansea midfielder and drags the left sided Crystal Palace centre-back with him.

The striker plays a first time pass to the right-back but look at the space he’s created, which if the run is timed well, can be exploited by the man at the top of the picture on the left-hand side.

It’s classic No.9 play but something of a lost art in the modern game. Think of Hazard, Willian and Pedro with that much space to run into.

It’s what Costa did so well last season as the picture below shows. He drops deep, drags a centre-back with him and Chelsea look to get runners in behind to make the most of it. That ability is something the Blues have missed this season. 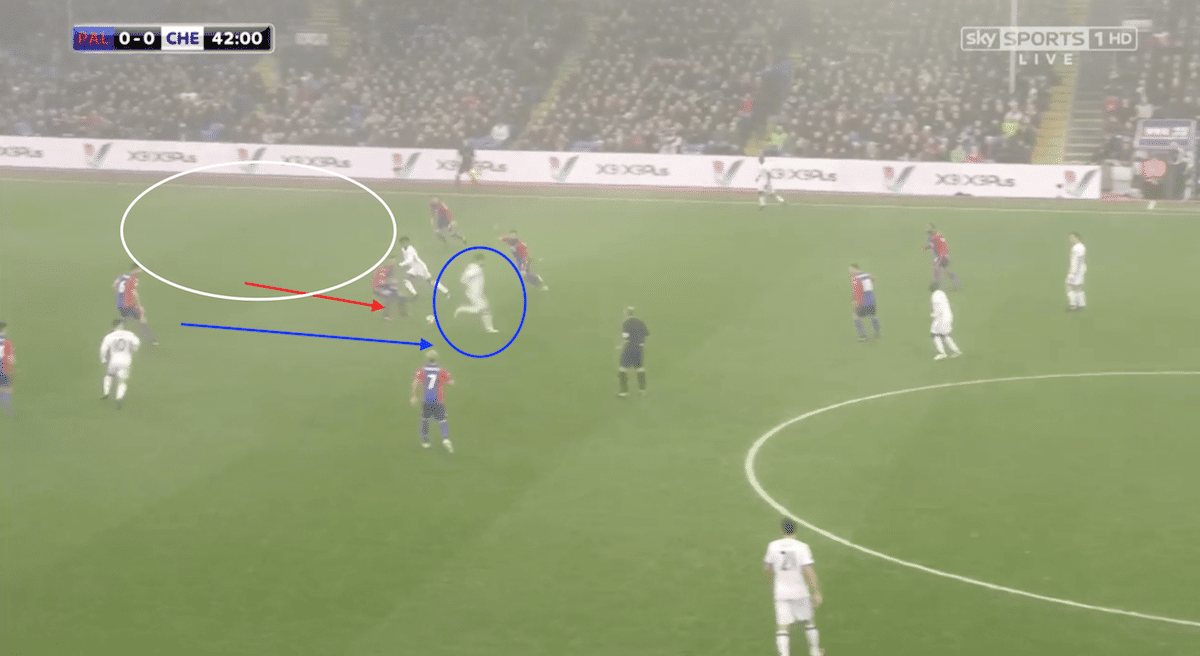 Bringing in Llorente, if Chelsea can somehow convince Tottenham to sell, won't guarantee the Blues a top four place in the Premier League, but it would go someway to securing Champions League football once again.

Conte hasn't been backed in the transfer market during his time at Stamford Bridge, much to his frustration. Completing a deal for Llorente, or any striker at this point, would be a show of faith in the manager that he deserves.