Sunderland are in a precarious position at the minute due to the fact they sit bottom of the Premier League on Christmas Day. In the history of the Premier League only three of the 23 teams who have been bottom on Christmas Day have avoided relegation. West Bromich Albion managed it during the 2004/05 season, Sunderland achieved the feat in 2013/14 and Leicester City did so in 2014/15. While it helps nobody to be a negative fan, those at Sunderland have every right to be concerned. History doesn’t look favourably upon them.

Sam Allardyce left the Stadium of Light  in the summer to take over as England manager and David Moyes was appointed as his replacement. The Scot had previous experience with relegation battles having successfully avoided the dreaded drop at Everton on numerous occasions. To back their new man the Sunderland board gave the manager over £30 million to spend in the market – Didier Ndong arrived from Ligue 1 side FC Lorient for a reported £17 million and Sunderland paid Chelsea £8 million for the services of Papy Djilobodji. 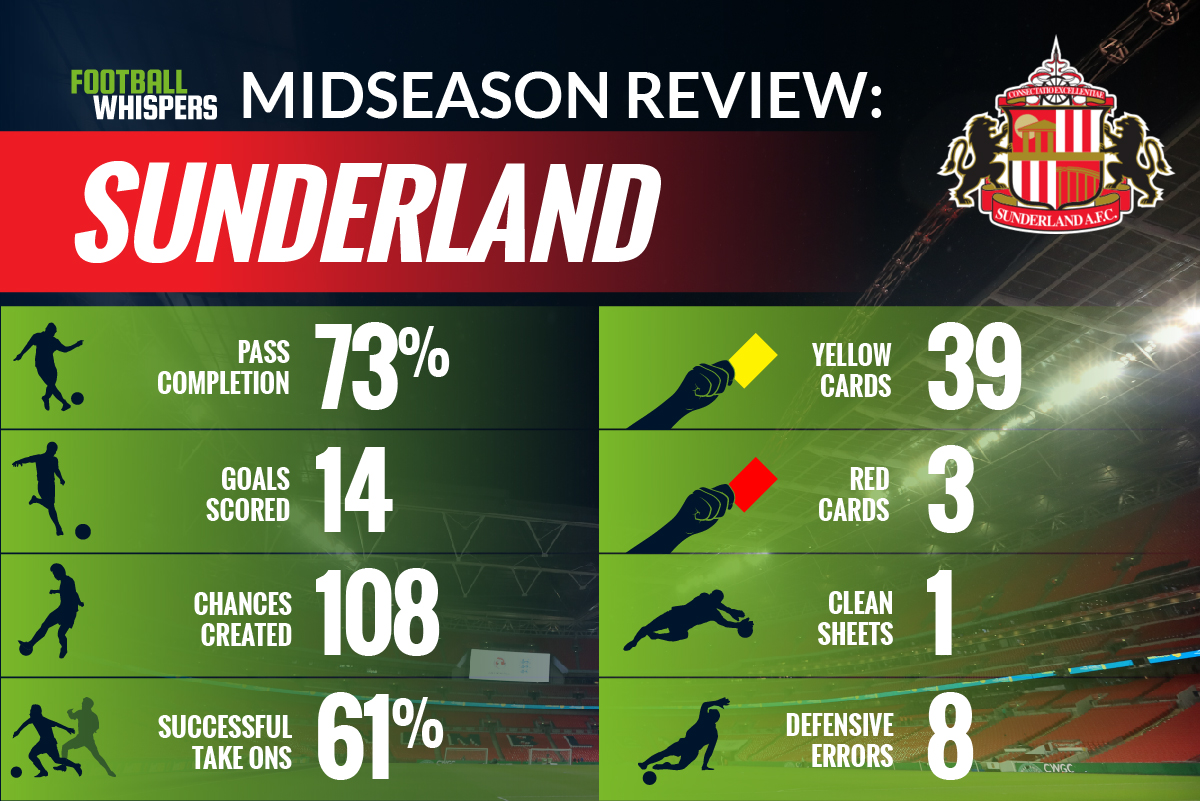 Three wins in their last seven matches show an upturn in form but the transfer window could halt the momentum they’ve slowly built up. Lamine Kone, who was a target for Everton in the summer, is said to be interesting a host of Premier League clubs and the £18 million release clause in his contract makes negotiations a lot simpler this time around. Both West Ham and Everton are said to be frontrunners for the former FC Lorient man.

Instead of recruiting in an attempt to climb up the table they may have to delve into the market to replace an integral member of their squad. It’s not ideal. Replacing Kone won’t be easy and there will be some tough decisions to make for Moyes and the Sunderland recruitment team. They could look at a player like Mamadou Sakho. The Frenchman is out of favour at Liverpool and Jurgen Klopp has admitted he’s not part of his first-team plans. The Frenchman rejected a move away in August but could well be tempted now, if he wants to see first-team football before the end of the season. However, recent reports suggest Sunderland do not have much to spend in January and subsidising Sakho’s reported £90,000-per-week deal would not be feasible.

A big money signing isn’t on the cards at the Stadium of Light, but if Kone was to leave you would imagine a chunk of that £18 million would be reinvested. One player who would not break the bank but would suit Sunderland’s style of play is SC Freiburg’s Çağlar Söyüncü. The centre-back, who only joined in the summer, has impressed as he’s helped his side to a comfortable mid-table position ahead of the winter break, they sit above Schalke and on level terms with Bayer Leverkusen. To appreciate what Söyüncü has to offer you need to understand what Sunderland would be losing if Kone left. 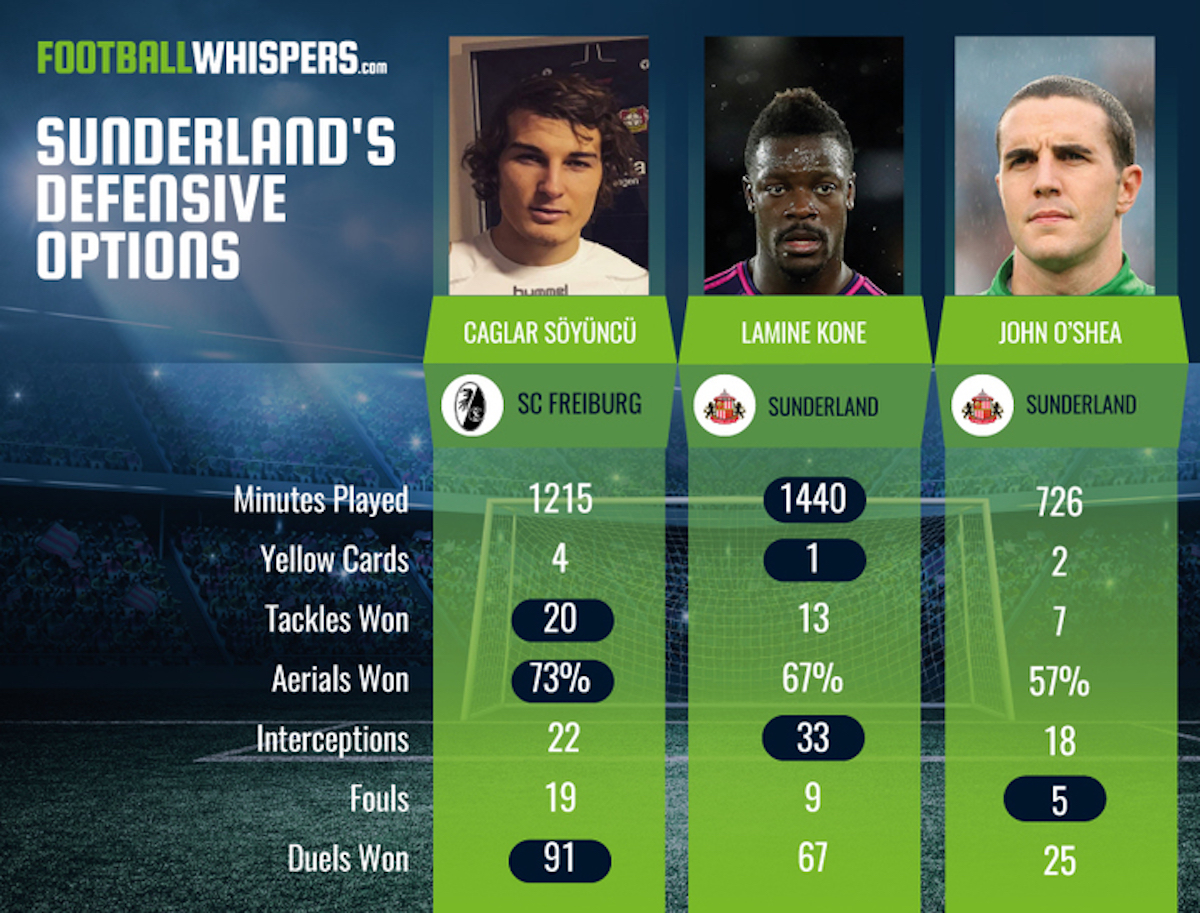 The 27-year-old man mountain of a defender has been one of Sunderland’s best players since his £5million move from FC Lorient last January. He played a vital part in saving them from relegation last season, with his two goals against Everton all but assuring Premier League football.

He’s dominant with his head, winning 3.1 aerial duels per 90 minutes since his move to the Premier League while in Ligue 1 he was averaging 2.3 throughout the five and a half years he was there. He’s got great recovery pace, he’s very proactive and he’s just an imposing figure who effortlessly brushes attackers aside without breaking a sweat. 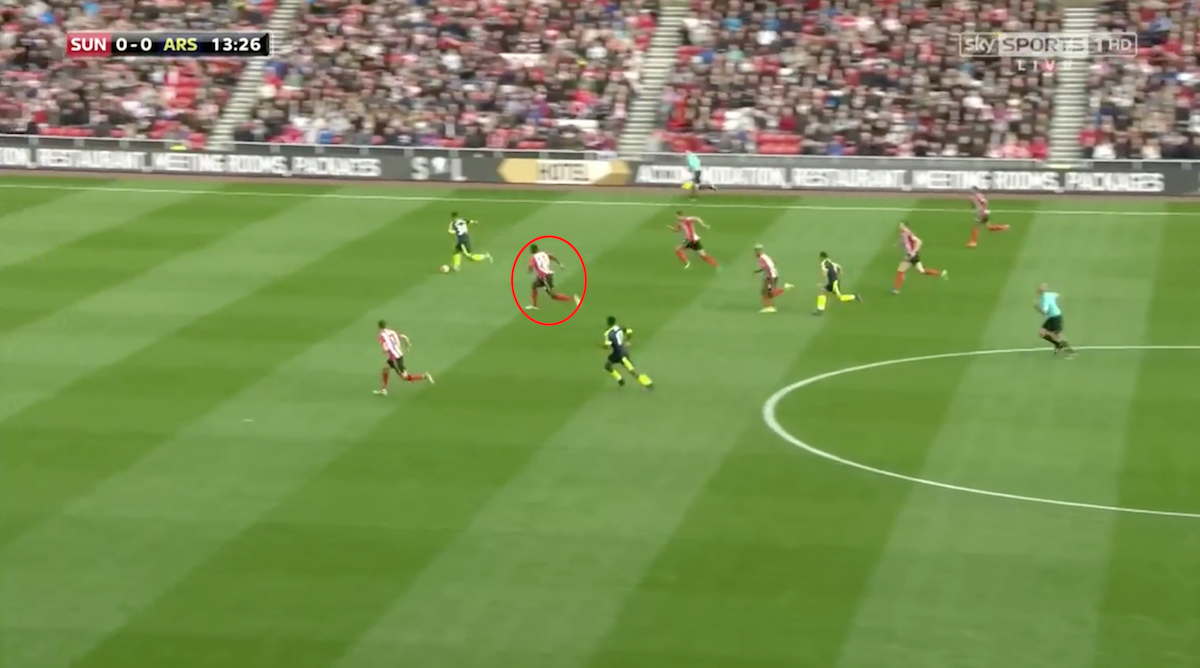 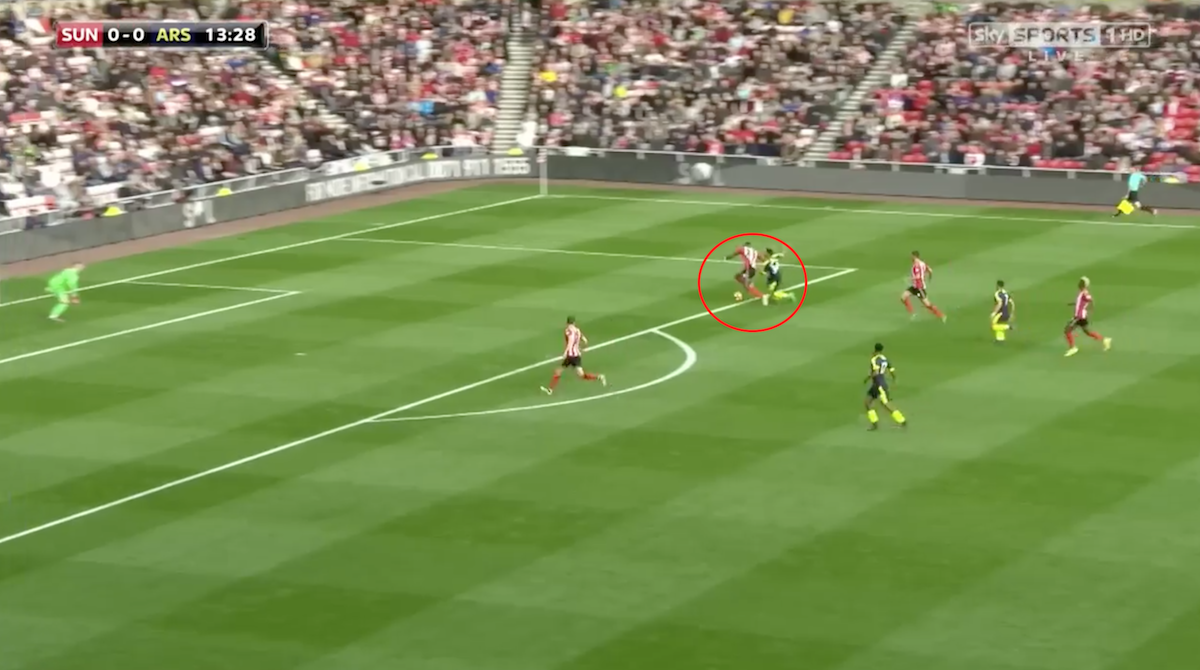 Here you get to see Kone’s ability to recover as well as his covering depth. Granted, Francis Coquelin is not the quickest, the Sunderland man makes up a lot of ground and cleanly wins the ball to stop the Arsenal attack after the away side had looked to exploit the space behind the Sunderland left-back. This is not a one off either, he often appears to put a stop to an attack just as you think Sunderland look in trouble.

The powerful centre-back also has the finesse to float a pass from one side of the pitch to the other. It’s not something one would usually associate with such a brutish defender. Of the 28.1 passes he attempts per 90 he completes 70% of them. Looking at stats alone it may look like he’s wasteful with the ball but that doesn’t tell the whole story. 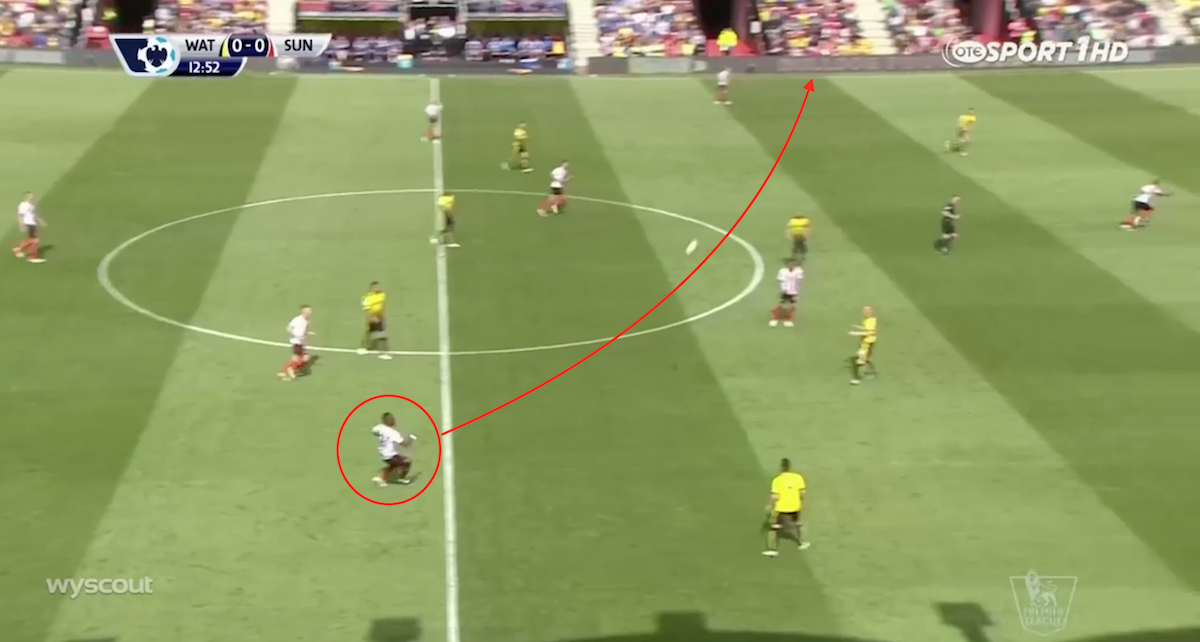 In the above picture you see Kone switch the ball to the Sunderland left. Watford have a high concentration of players in the area ahead of the Sunderland centre-back as well as to the near left of him. There’s no simple pass on but to stretch Watford and open up space centrally the ball is switched to the opposite flank and Sunderland can build from there. 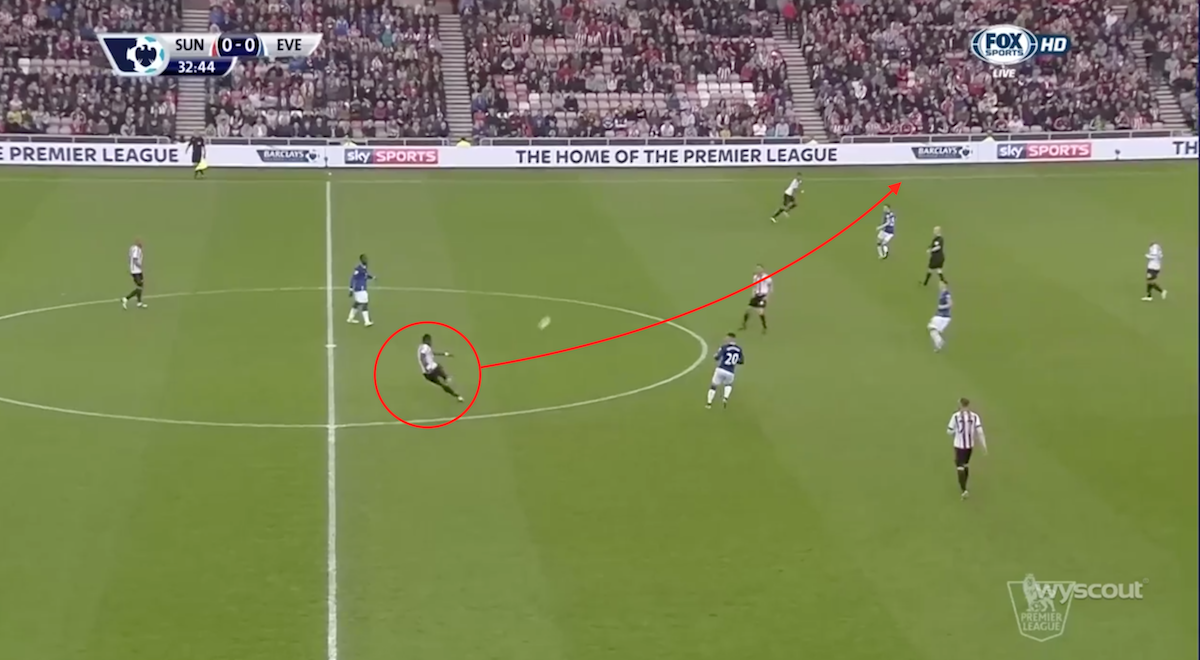 Similar to the example before, Kone again switches the play to the left flank. It’s a pass that exploits the space on the Everton right and means the away side, who look comfortable with men behind the ball, are now having to turn to face their own goal and chase back. It’s by no means a difficult pass to execute but the fact Kone has that ability in his locker gives him that extra dimension.

A look at Çağlar Söyüncü

The 20-year-old Turk, who made his debut for Altınordu S.K, has already been capped at international level and has been tipped as a potential future captain. In his short spell at SC Freiburg he’s averaged 3.7 aerial duels won per 90 minutes. He’s just 2cm shorter than Kone, and he sees a lot more of the ball than his Sunderland counterpart. Averaging 50.2 passes per match and completing 79% of them. He’s aerially dominant like the Ivorian and he covers well and he has the ability to pick passes from deep areas. 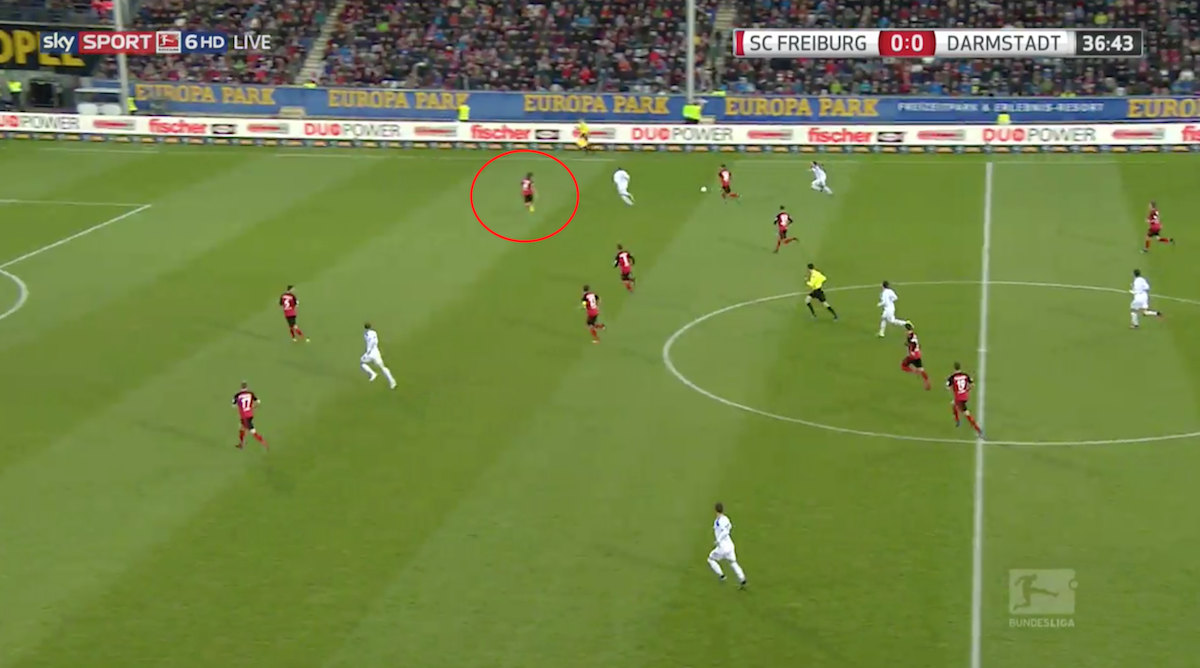 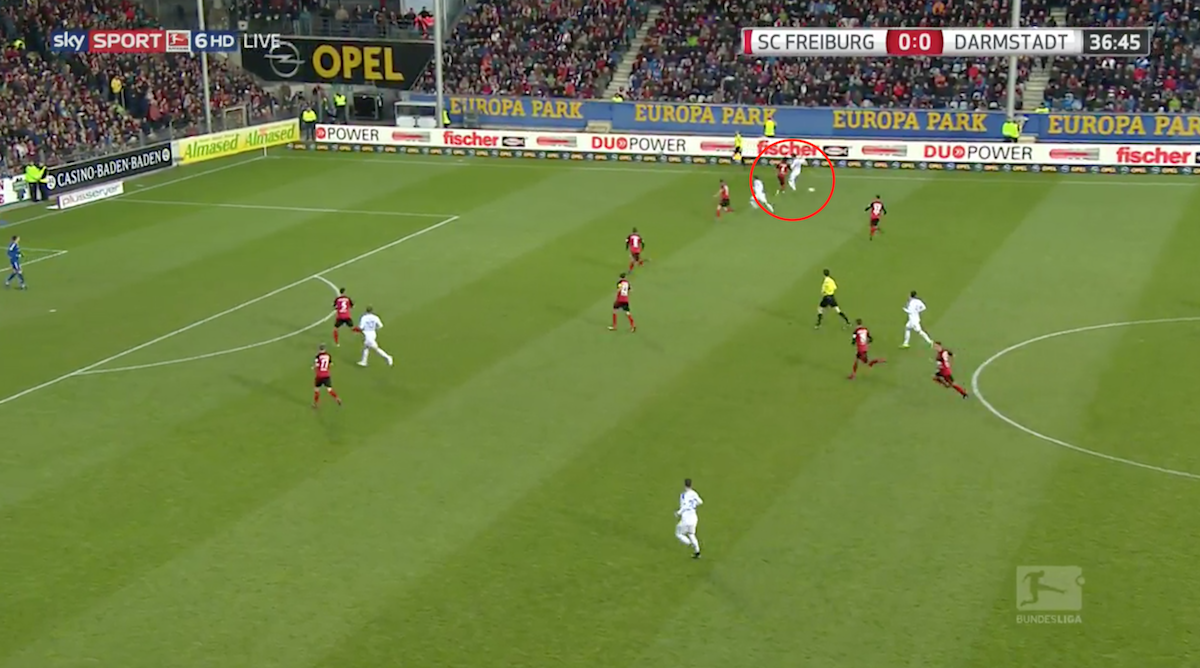 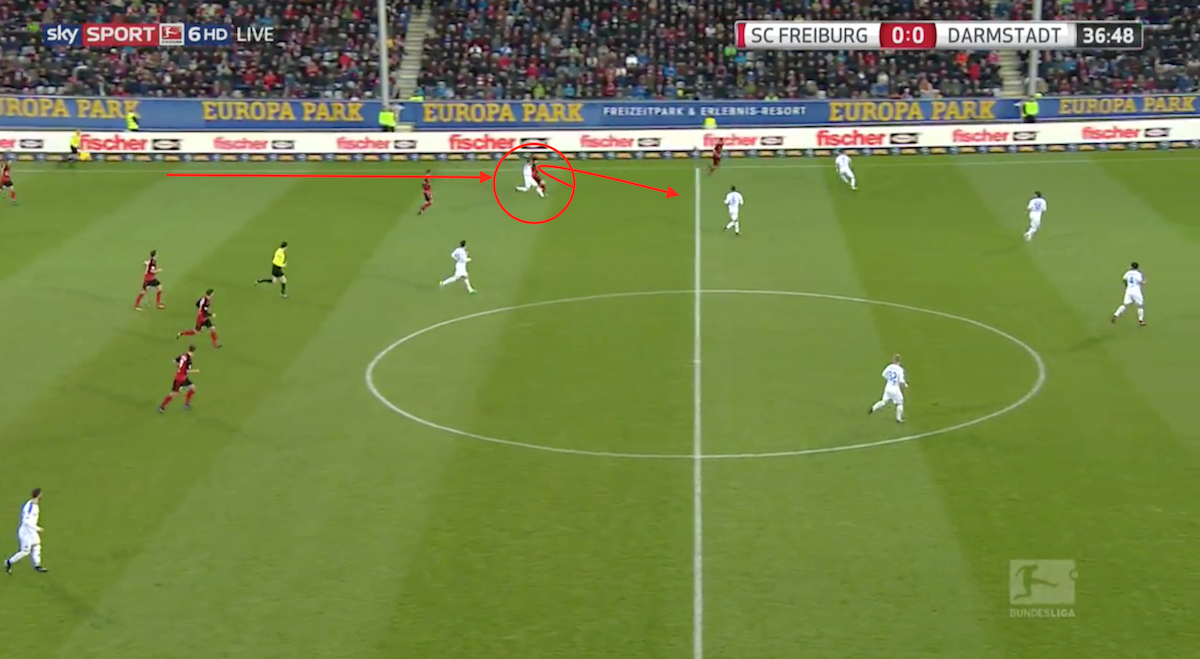 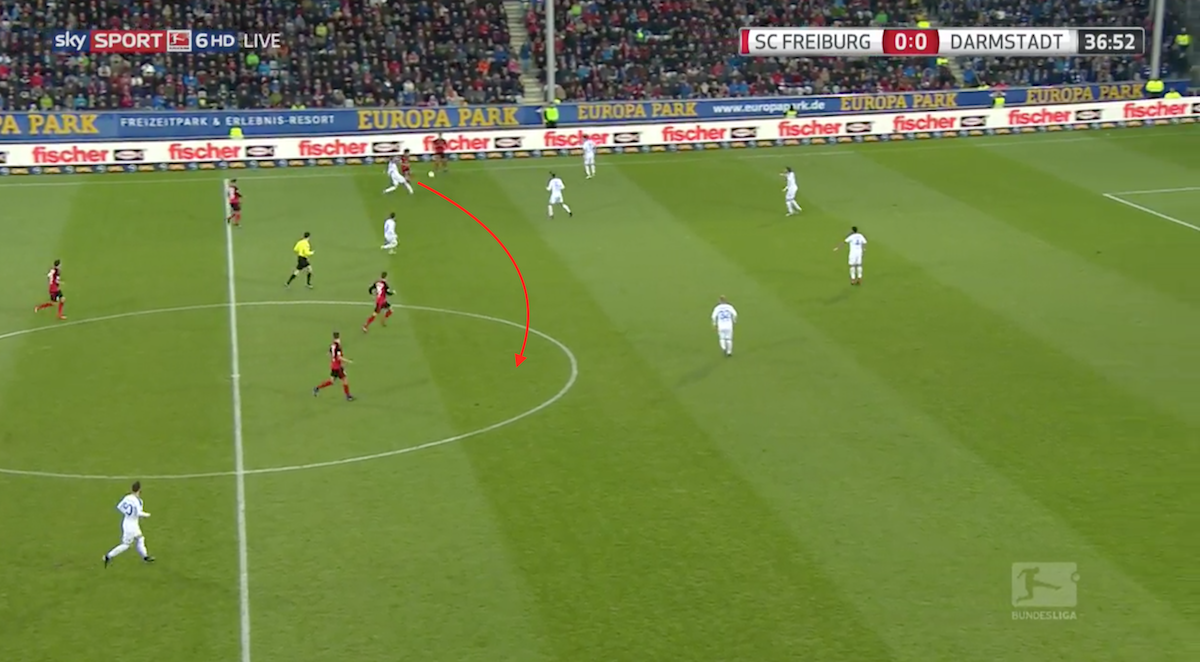 In the series of pictures above Söyüncü showcases his anticipation, his calmness and his ability on the ball. In the first picture you can see the left sided centre-back pushing over to cover the space out wide in an attempt to stop the Darmstadt attack. He holds the play up before winning the ball. He then drives forward, feints to go back on himself, before carrying the ball into the opposition's half.

The defender then plays a pass centrally to an area where two of his teammates are. He not only relieves pressure on his team he starts an attack. Imagine having that in your arsenal as a team, a centre-back able to carry the ball forward under pressure. 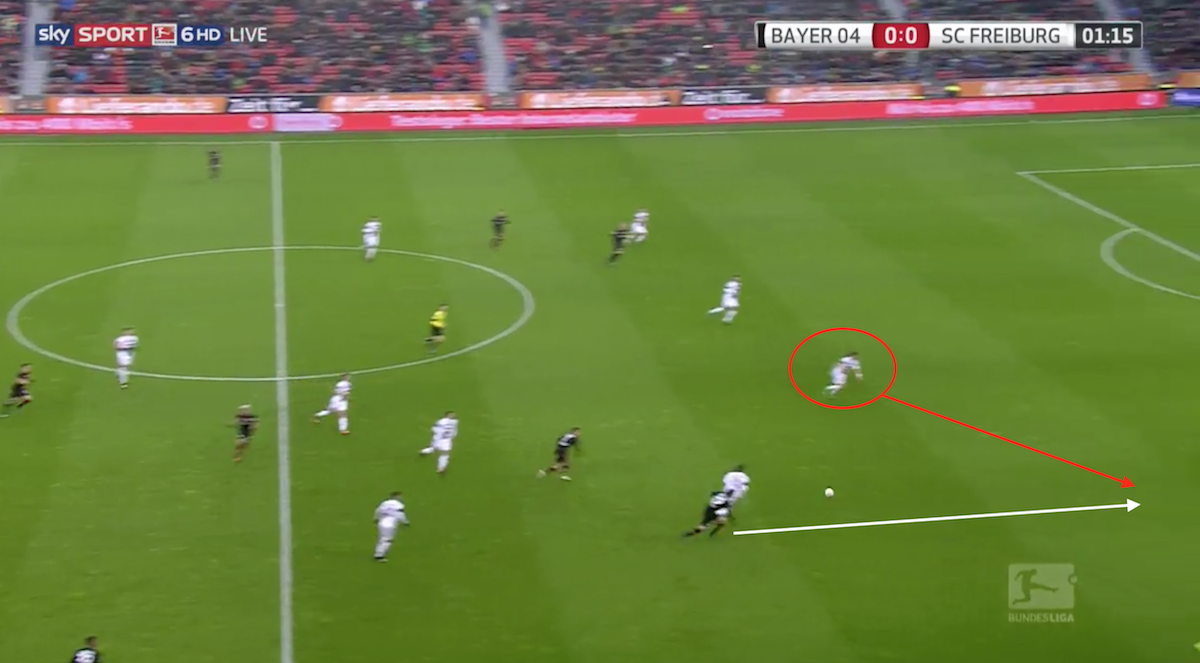 This time it’s Söyüncü’s ability to cover gaps that's on show. Kai Havertz, the young Bayer Leverkusen player with pace to burn, is running into the space behind the SC Freiburg left-back. The 20-year-old has a lot of ground to cover but not just that, he has to time the tackle to perfection. He does both things, getting to the ball first and ushers it out for a throw in, stopping the Bayer counter-attack dead.