During the summer transfer window, West Ham seemingly had an obsession with spending  £30 million on a striker. The Hammers reportedly had bids in that region turned down for both Alexandre Lacazette and Michy Batshuayi. Lyon chairman Jean-Michel Aulas wanted Lacazette to continue his reign as the King of the Parc Olympique Lyonnais whereas Batshuayi swapped Marseille for Chelsea. After failing to land a big money striker, Slaven Bilic brought in Jonathan Calleri and Simone Zaza on loan as well as spending a reported £20.5million on Swansea attacker Andre Ayew.

For various reasons the gambles haven’t paid off. West Ham have seen an upturn in form and are currently three games unbeaten in the Premier League but heading into Christmas they sit 13th in the table. The team are averaging just the 1.1 goals per game and have failed to score more than 2 goals in any Premier League match this season. What’s even more of concerning is even in the four games they have scored two goals in they’ve taken just the single point. Lack of goals is definitely a problem and it hasn’t gone unnoticed.

Over recent weeks West Ham have been linked with a January move for Inter Milan’s Mauro Icardi as well as loan moves for Daniel Sturridge, Michy Batshuayi, Anthony Martial and Marcus Rashford. While they should be applauded for showing such aspirations, perhaps it’s time they lower their expectations and start looking at realistic targets. One such player could be Hamburg’s Bobby Wood.

The 24-year-old American only joined Hamburg in the summer after impressing in the 2.Bundesliga for Union Berlin where he netted 17 times in 31 appearances. His form, as well as his ability, convinced Hamburg to part with a reported £3 million to secure his services. So far, so good. The striker has 4 goals to his name in just 746 minutes of play. He netted what turned out to be the winner against Schalke on Tuesday evening to lift them out of the relegation zone.

West Ham are by no means in a relegation battle but just the seven points separates eight clubs at the bottom. Bilic needs fighters in his teams and Wood is just that. He’s not in the same league as Carlos Tevez, or even anywhere near as good as the Argentine, but the two do share some similarities. Traits that could potentially see the American flourish in England.

He’s bullish, he’s brutish and despite only being 5ft 9 inches he’s an imposing presence who regularly bullies defenders. He’s as comfortable playing off the shoulder of the last defender as he is holding the ball up in deep areas. He’s used to playing the lone striker role in a similar system to the one West Ham deploy.

He works the channels and is a general nuisance to the opposition but more importantly, he scores a variety of goals. For example, he’s not dependant on crosses into the area. A trait that’s rare to see in a modern day striker is just how early he opts to shoot. Before the defence and the ‘keeper have had time to set themselves Wood has fired a shot goal wards.

He’s not the perfect striker but he may be perfect for West Ham. Wood could be viewed as a gamble but if it pays off he could turn out to be one of the club’s best ever signings. 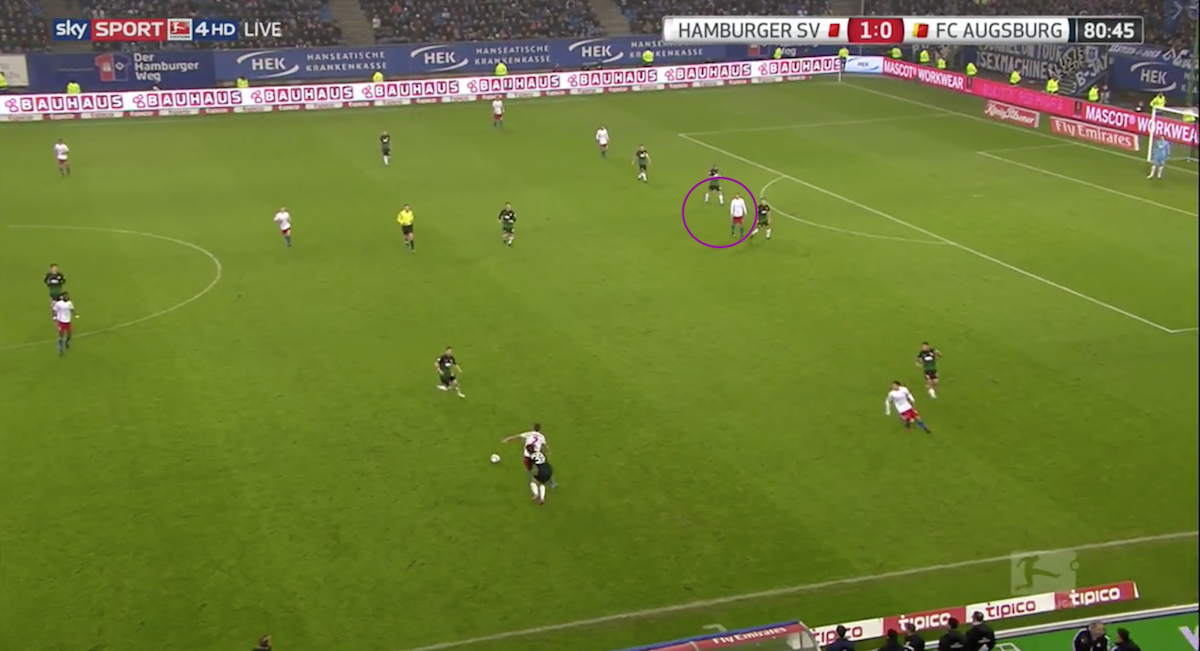 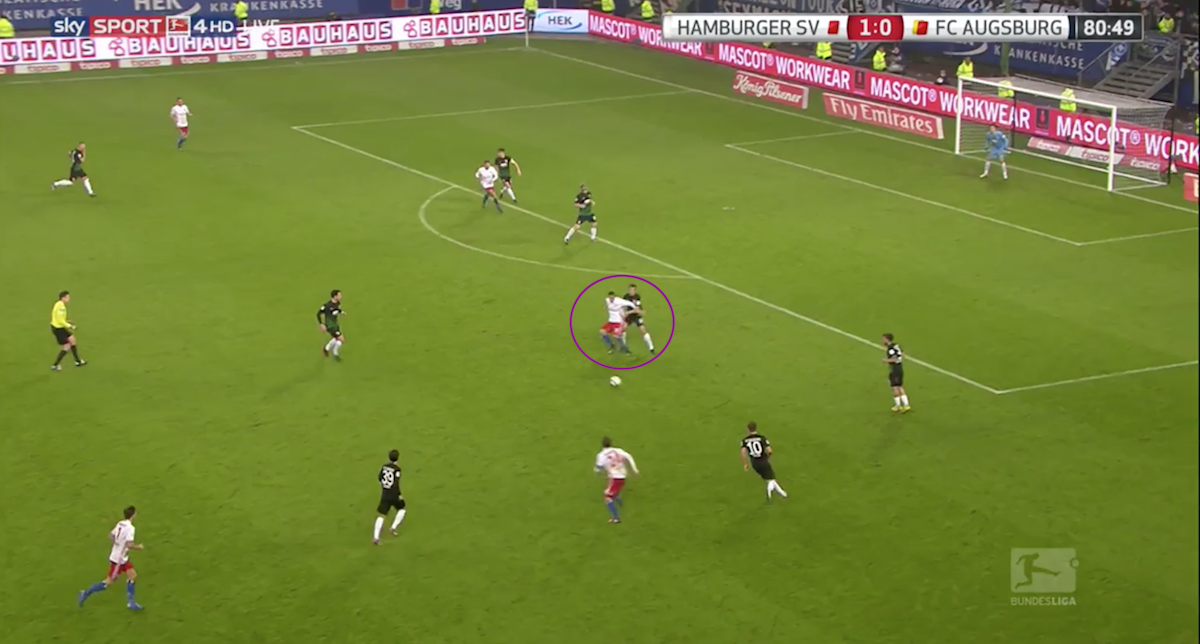 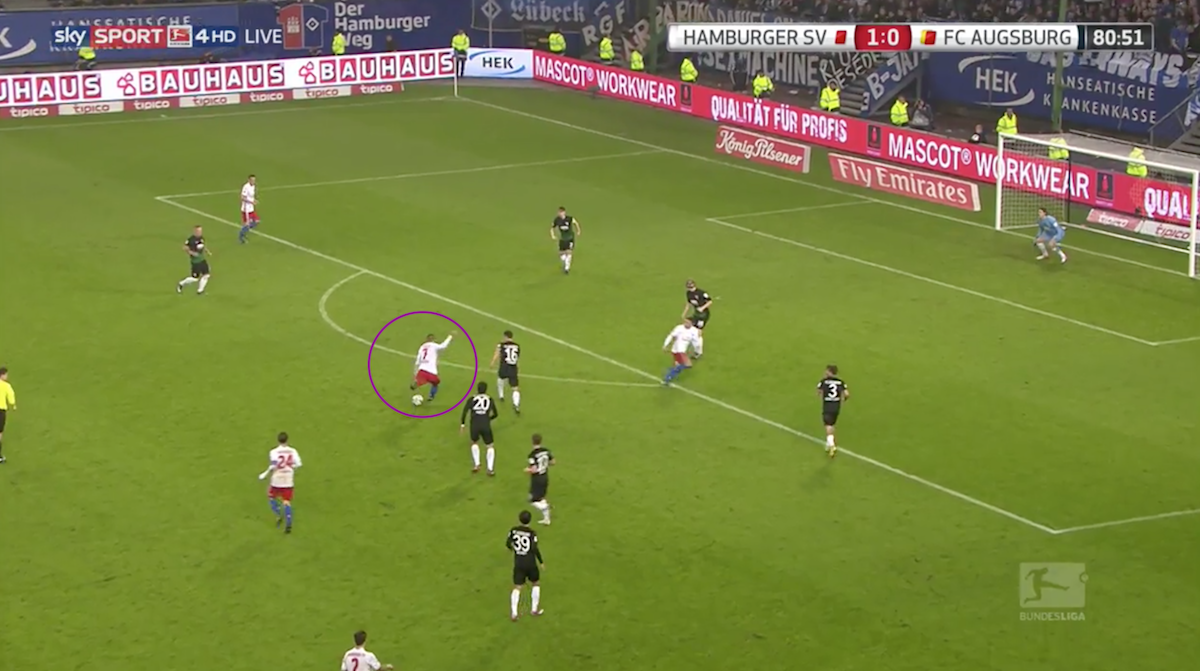 In the three pictures above, taken during Hamburg’s match against Augsburg, Wood shows off his movement, his ability to hold the ball up and the fact he like to get shots in early. Initially he positions himself in between the centre-backs and keeps them both pinned, as play progresses he drops into space ahead of the defence and drags the Augsburg left sided centre-back with him. He holds off the player and turns into space. In the third picture you can see him striking the ball from distance and he works the ‘keeper. Some people may feel it’s a waste given to there is an unmarked Hamburg player to his left but Wood has the capacity to score from this range. 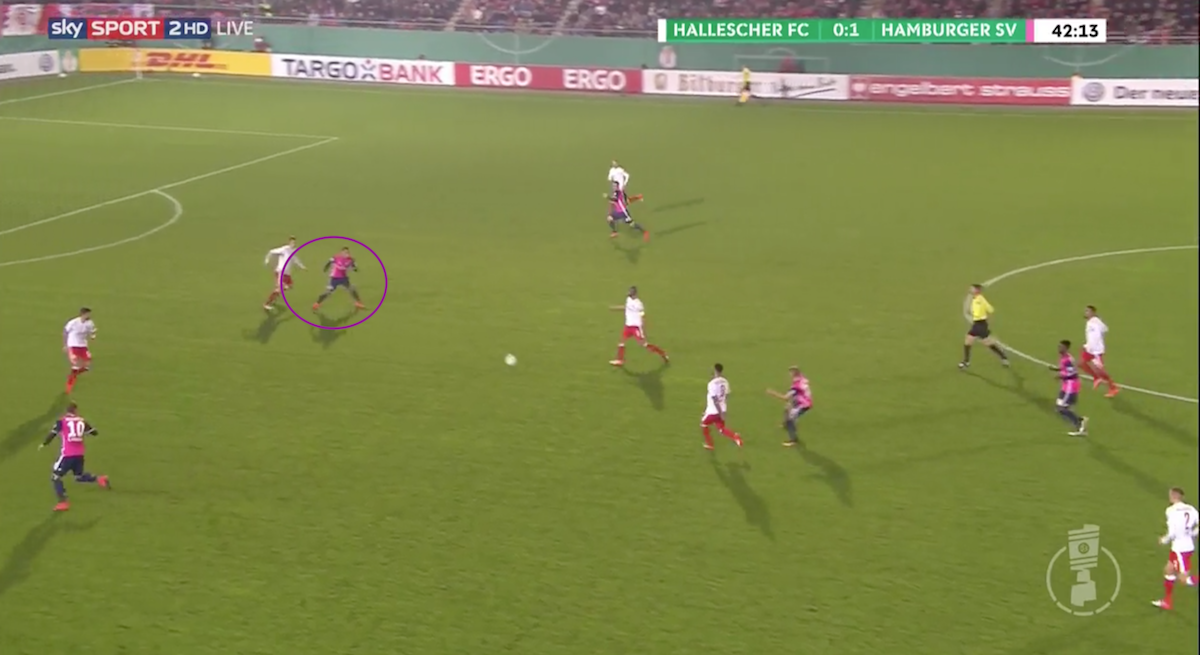 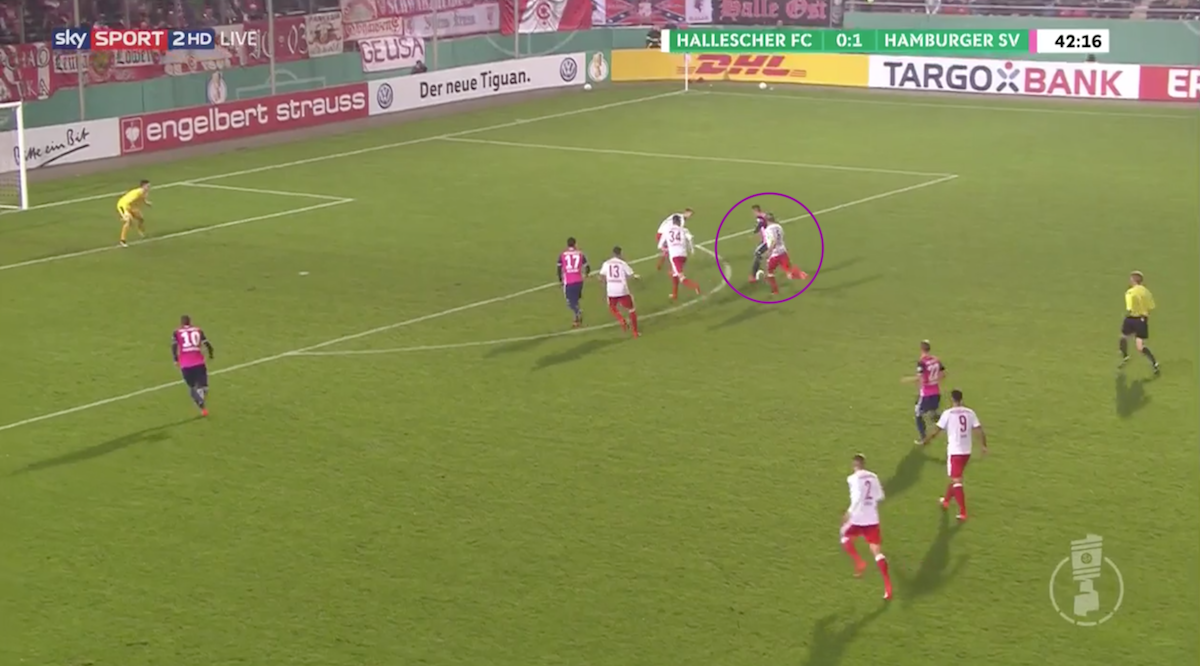 The two pictures above are similar to the ones taken against Augsburg. Wood is a master at utilising space. He receives the ball with his back to goal after dropping into space ahead of the defence. The opposition can’t allow him to turn on the ball with ease so the centre-back looks to close him down but before he’s able to get close Wood has turned and drove into the space to the right. In the second picture you see him lining up the shot and he fires it past the ‘keeper at the near post. It’s an astonishing finish when you consider where he is when he strikes it and where the ‘keeper is in relation to it. 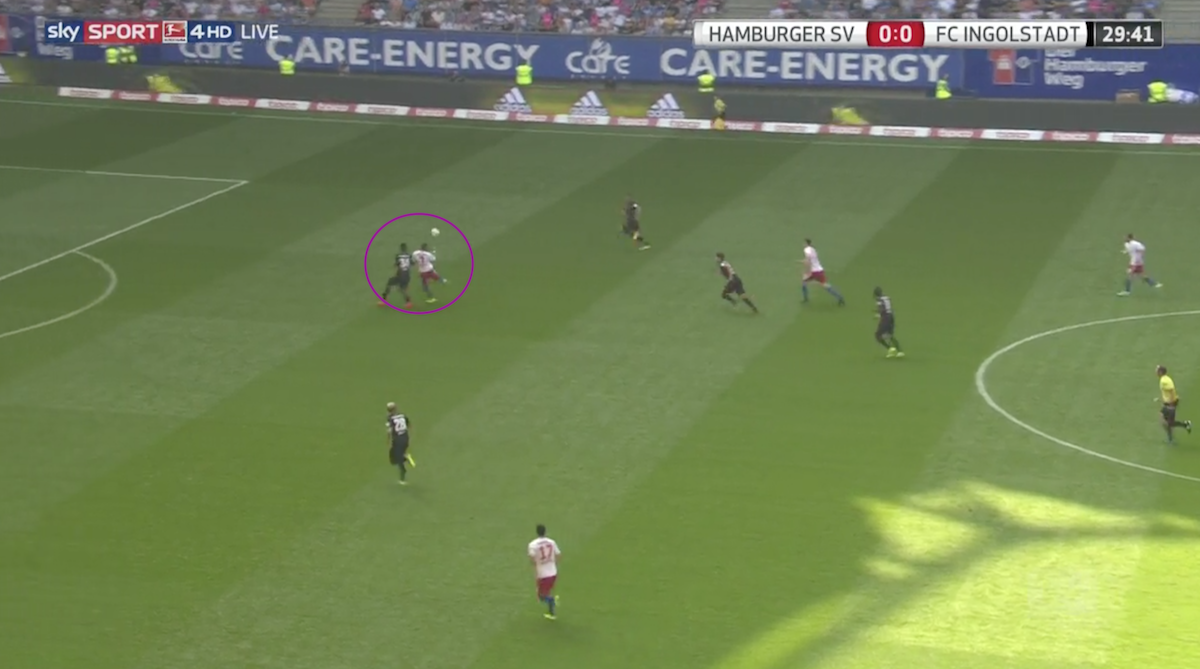 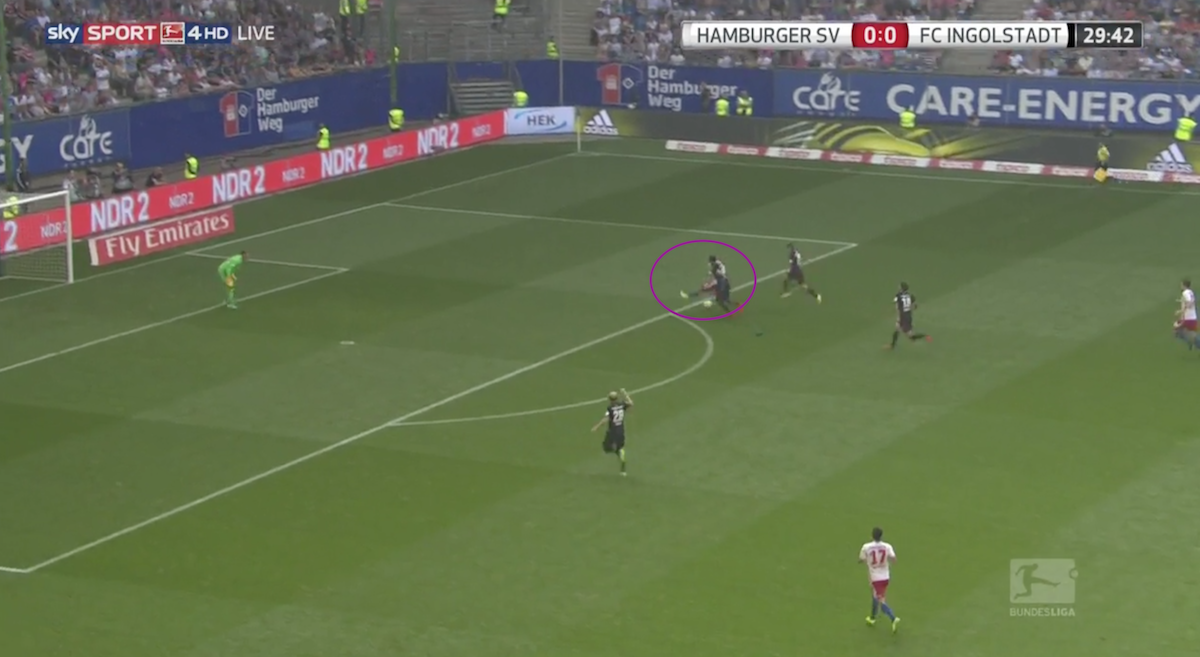 Wood shows his anticipation and reading of the game. He’s reacting to a long ball from the back and as he races through he brings down what is an awkward looking ball and as soon as it’s under his spell he unleashes a shot towards goal. The second picture is taken just as he strikes the ball. He has no right to be scoring from that position but he does just that as the ball is fired across the ‘keeper and into the far corner of the goal. 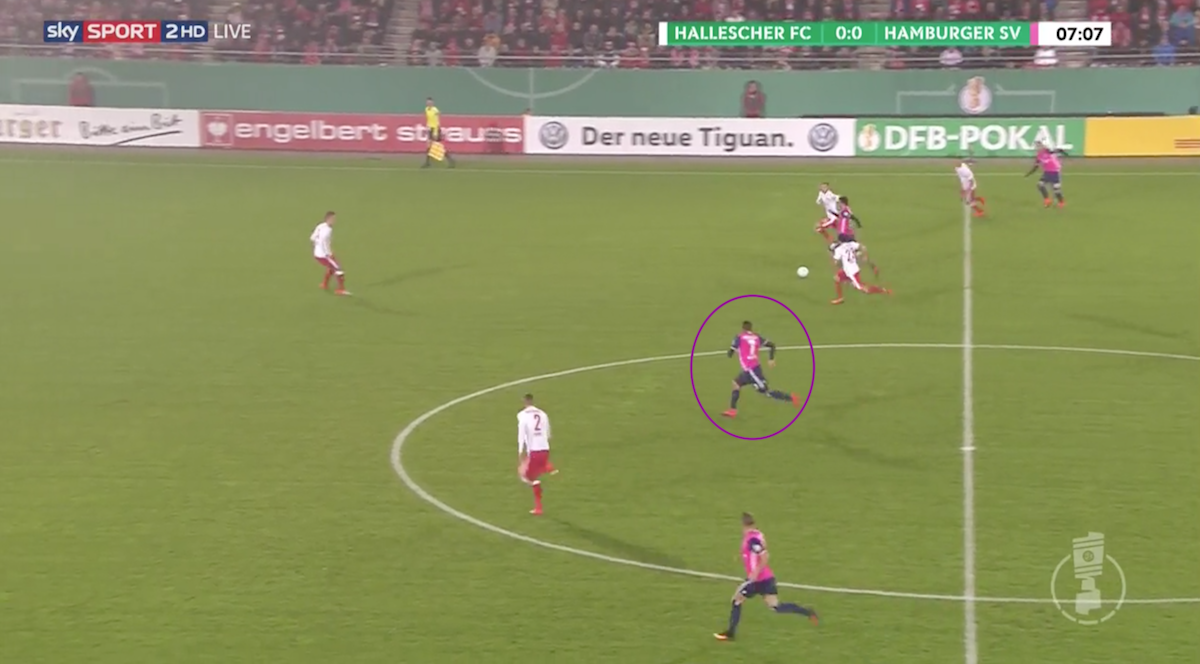 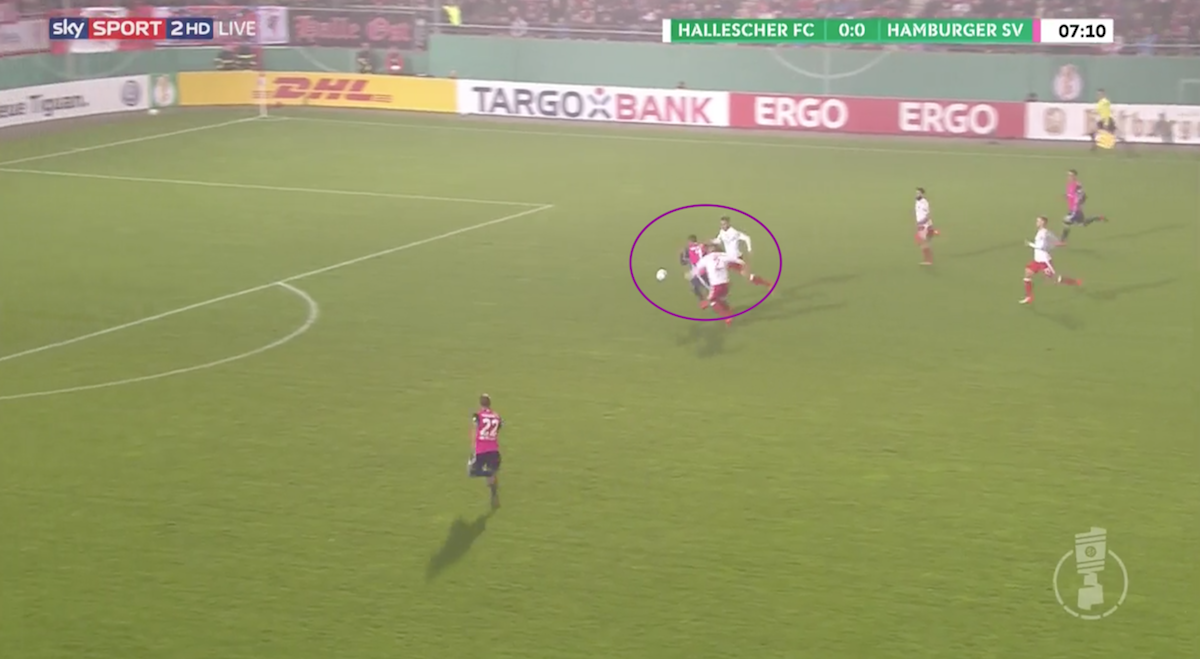 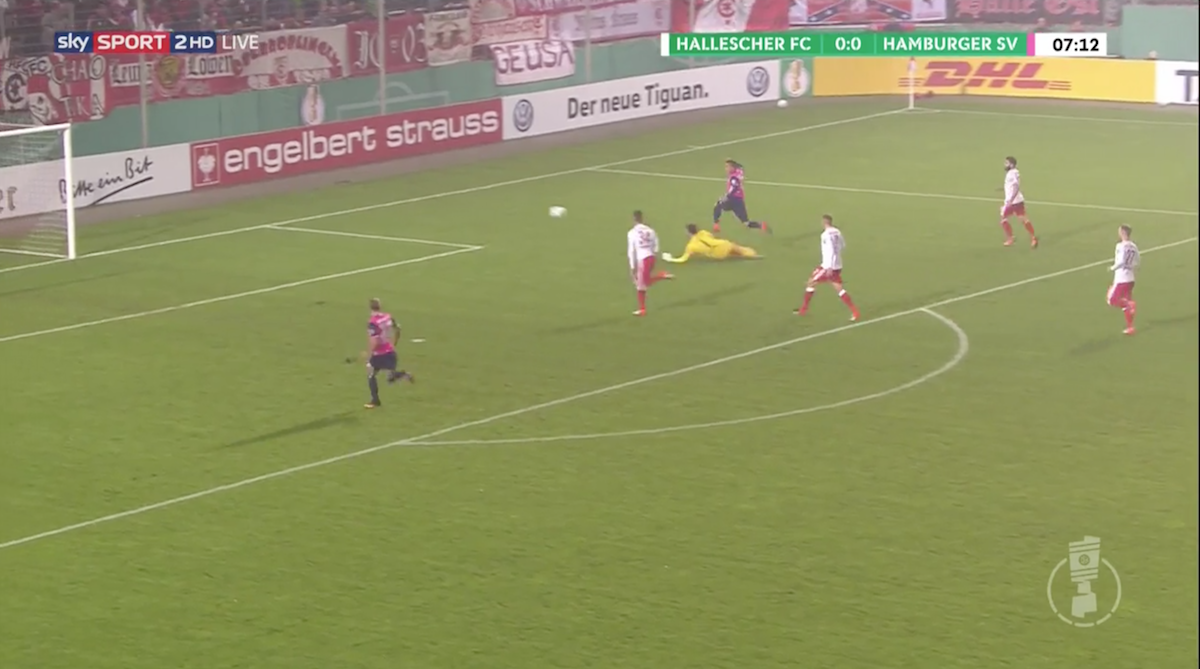 This time around you get to see the other part of Wood’s game. He bursts onto play from deep in the first picture and his touch allows him to blaze past the two centre-backs in the second picture. Then, in the third picture, he shows the world he’s not always about sheer power. He has a refined style and he shows this by casually lofting the ball over the advancing ‘keeper to give his side the lead. It’s not an easy finish but Wood show’s he’s calmness personified.

Bobby Wood isn’t a world beater. It’s unlikely he’s going to score 30 Premier League goals but he’s a goal threat, he makes chances for himself and he works hard to bring others into play. It’s those traits and abilities which are transferable from league to league. He’s going to bring the likes of Payet into the game. He’s versatile in the sense defenders don’t know whether he’s going to run them or just let one fly from 30 yards. He’s unpredictable and that’s what will give the Hammers an advantage even before kick off. He seems like an ideal candidate to get West Ham firing again and Hamburg could be convinced to sell for around the £15 million mark.