Rumours of Jose Mourinho's interest first surfaced in February, with the former FC Porto and Chelsea boss seeing the little attacker as the perfect addition to his squad.

PAPER TALK: Man United are reportedly planning a £70m move for Bernardo Silva, plus more from the papers… https://t.co/pVHhHiTBCJ pic.twitter.com/GUYnIcxvjn

The 22-year-old has regained his sensational form this season, helping the Monegasque side score 92 goals in 30 league games this campaign, only Barcelona have managed more.

Monaco are top of Ligue 1, ahead of Paris Saint-Germain on goal difference and will take on Juventus for a place in the UEFA Champions League final. After beating Manchester City and Borussia Dortmund over two legs, anything seems possible now for Bernardo and his team-mates.

United fans may have already taken notice as the Monaco No.10 helped eliminate their city rivals, stopping Pep Guardiola from being able to win a piece of silverware this season. Bernardo has shown elements of David Silva in his game, but a combination of pace, intelligence and an incredible work-rate would make him a superb signing for Mourinho.

The Portuguese international moved to Monaco in 2014, initially on a loan deal from Benfica, but after his impressive displays he was bought outright just four months later. 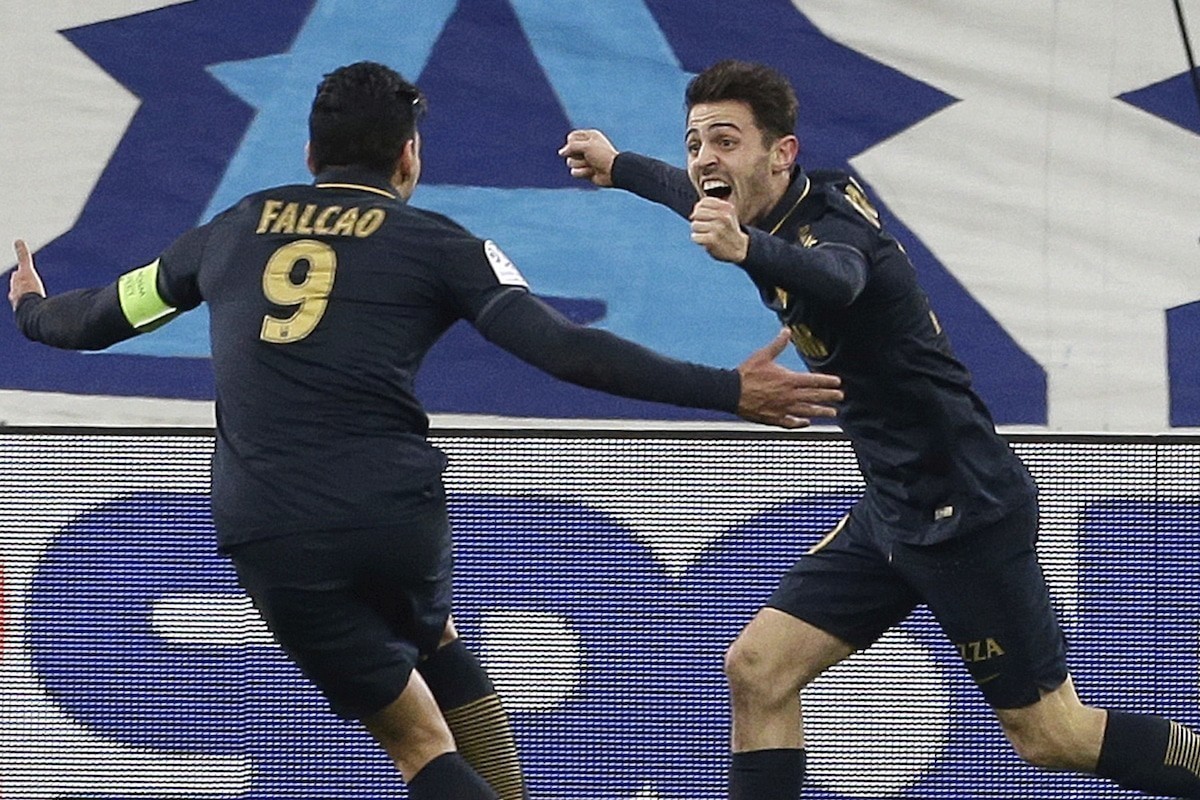 After 140 games in the principality, he has been involved in 44 goals. This term, Leonardo Jardim has taken the shackles off the attack and after picking up seven goals and one assist last season, he’s picked up six goals and eight assists in the league this term.

Silva, playing in the shadows of Anthony Martial and Yannick Ferreira Carrasco on his arrival, missed out on his opportunity to shine this summer, injured at the end of the league season, he missed the European Championships.

That has worked in Monaco’s favour and he, Thomas Lemar and Fabinho have been able to transform the attacking side of ASM’s midfield.

What would Bernardo Silva bring?

Bernardo plays on the right of Jardim’s 4-4-2, but with his dazzling left-foot, he is encouraged to come inside and create havoc. He doesn’t look the quickest, he won’t beat players with pace on the outside, but he seems to drift past full-backs with ease.

With elegance, grace, he makes it look almost effortless as he jinks and dives, twisting and turning in and out of defenders. Once he finds a team-mate, he is keen to get in the box and as he showed on against Marseille at the Stade Velodrome, he can even finish with his head.

For Monaco, he has only played a handful of games away from the right-flank this term, but can also function as a No.10. That is the role he plays for his club, just his starting position comes from the wing.

Looking at how Manchester United have lined up recently, it’s interesting to see where Mourinho sees his countryman fitting in. After a slow start to life at Old Trafford, Henrikh Mkhitaryan has become an important part of the former Chelsea manager’s plans.

Where does Bernardo fit at United?

When playing 4-3-3, that is where Silva would suit best, and you can’t see United sanctioning a £40million move for a substitute – don’t mention Anthony Martial – if they were looking to play 4-2-3-1 more, both players could fit into the starting XI and even swap positions to devastating effect.

Similar to the Armenian, one area of Bernardo’s game that would have to change under Mourinho is his defensive contributions. United ’s attackers are asking to play a press, put the defence under pressure and work extremely hard.

Bernardo does the pressing very well, and will chase the ball down all day, just his final tackle needs some work.

Just as Eden Hazard found out, it’s a world away from what is expected of you in France. Attackers aren’t asked to defend as much. They will still attempt to help, but you are needed more in the final third. 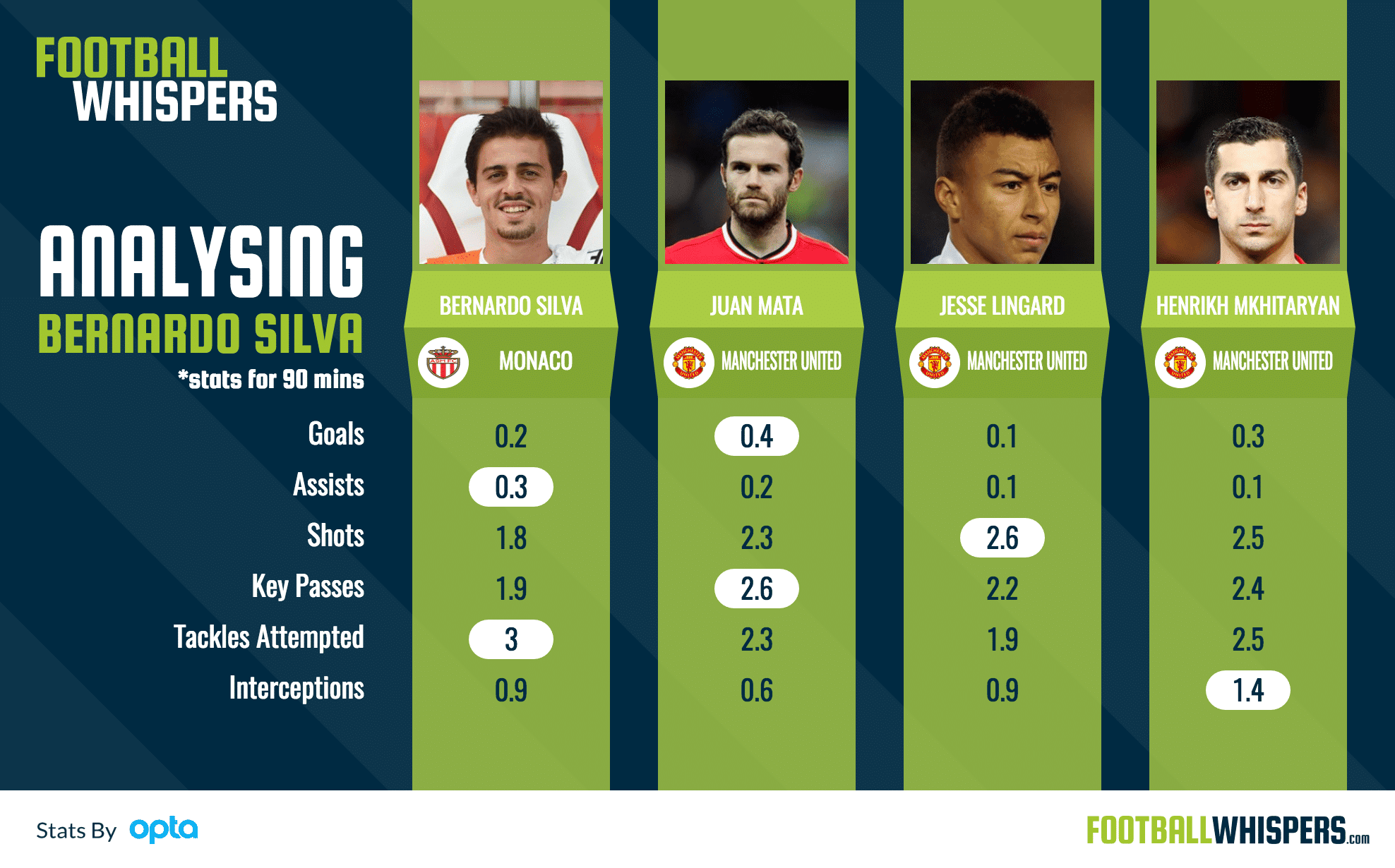 That shows in his statistics, making just 0.9 interceptions per 90 minutes, compared to Mkhitaryan’s 1.4. The former Dortmund player also attempts 2.5 tackles, but Silva trumps him with three per 90.

Monaco helped dumped Spurs out of the UEFA Champions League, Bernardo was immense at Wembley. He had one shot on target, which found the net, completed two dribbles, one key pass and was fouled three times – much to the delight of his coach. 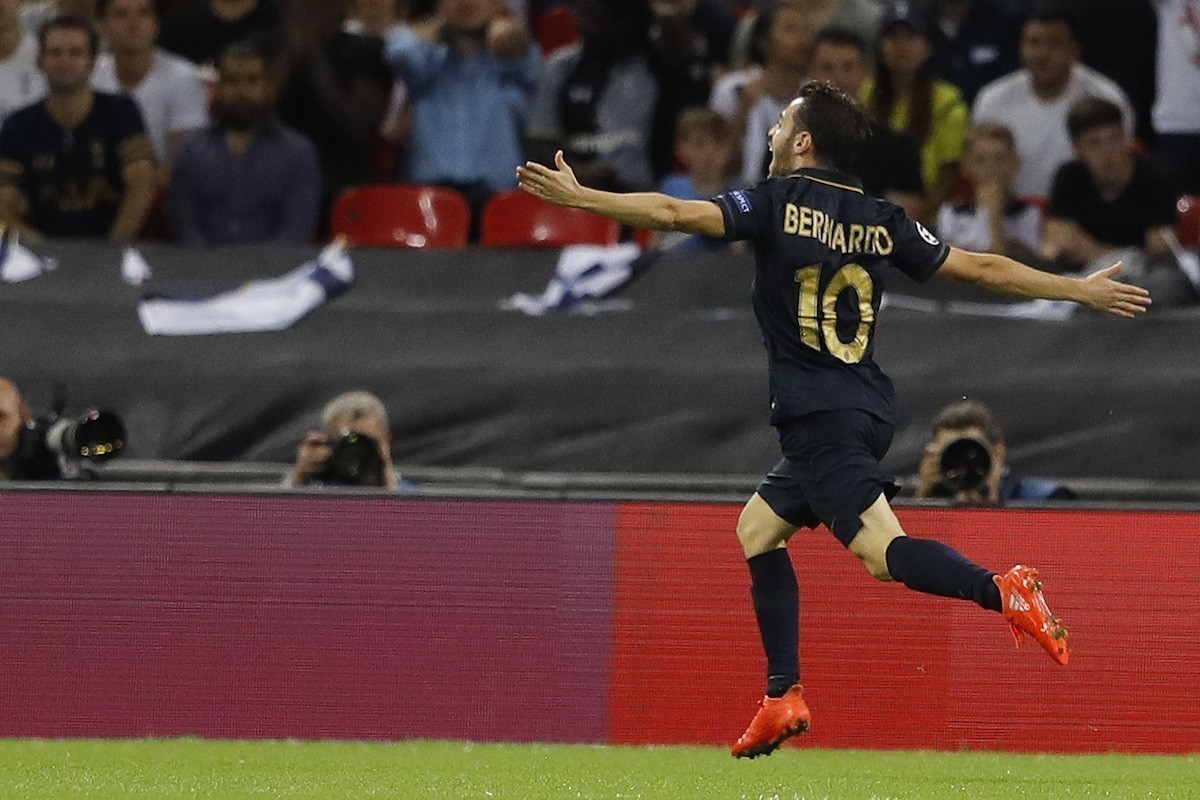 “He had a very good game,” Jardim told the press after the game. “He fitted in perfectly to our tactical plans, he created problems offensively for the Spurs defence throughout and he showed what an agile, nimble player he is. He was very important on the transitions, he helped us to keep the ball when he had it.”

If Mourinho thinks that the 22-year-old can adapt and play a part in his system, the Portuguese midfielder is an amazing and exciting talent and has quite frightening potential. He will need time to adapt, he’s strong enough to hold off defenders in Ligue 1, but the increase in pace and physicality in England will take some adjustment.

Unlike in teams where you play without the ball, Manchester United are an ideal club, you can play with possession, but also on the counter, very similar to how Monaco have gone about their league campaign this season.

Silva is a magician when he has defenders on the back foot, he can use movement from others, his own skill and a cultured left-foot to cut you apart with ease. Give him Paul Pogba, Zlatan Ibrahimovic and the other talented members of Mourinho’s team and you can see the little Portuguese maestro taking his game to another level.