During Arsène Wenger’s two decades in North London, he gained a reputation for his excellent man-management, a super developer of young talent. Alex Iwobi, the young Nigerian forward, is the latest prodigy to come out of the Arsenal system.

However, his failings since joining the first-team, are a symbol of both the struggles of the club and his manager, but it could just be that the 20-year-old just isn’t good enough to star at this level.

This campaign, the young forward has just four goals in 33 appearances, scoring every 519 minutes.

Chance to Impress against Sutton 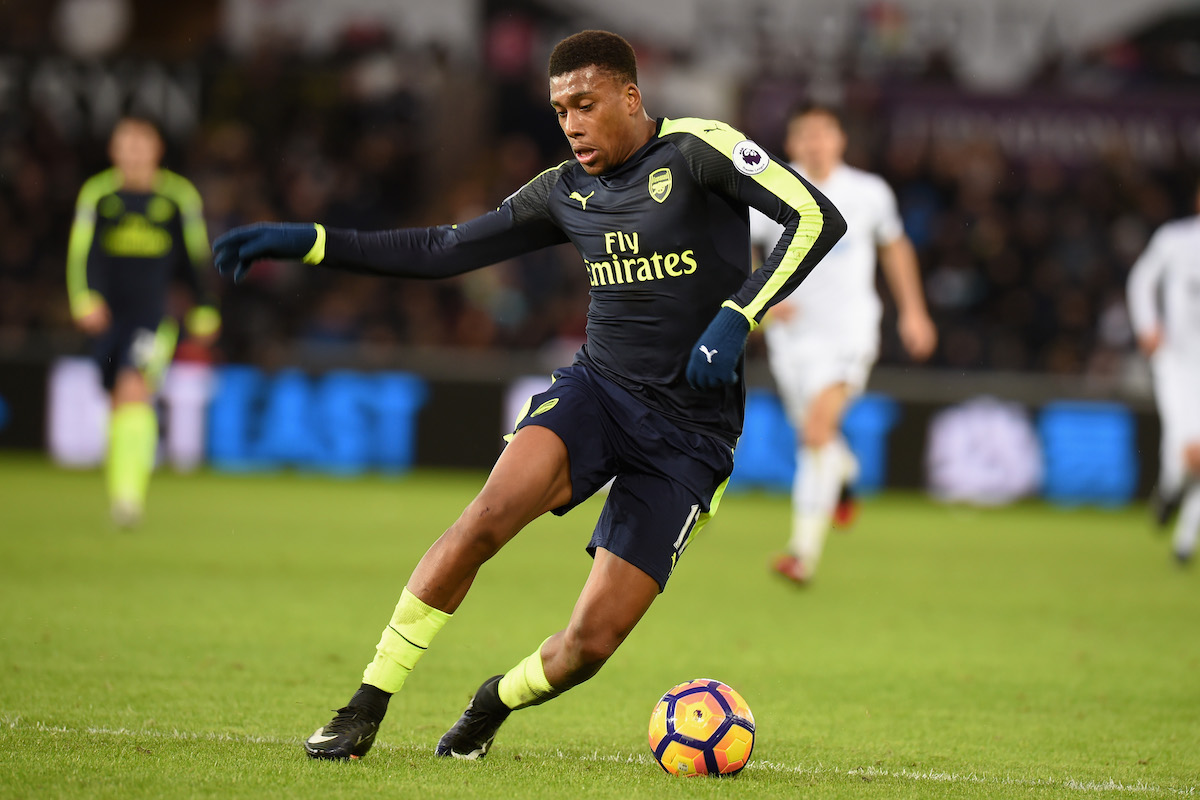 Taking on minnows Sutton United in the FA Cup on Monday night, Iwobi had a chance to take the game by storm. Playing up beside Lucas Perez and Theo Walcott, he should have had the opportunity to excel, but in the end, it was a flat, disappointing and very forgetful display.

Even the most patient of Gunners fans finally lost patience with the forward. A poor performance against Bayern Munich was excusable, they are one of the best teams in Europe, but against Non-League opposition, he still looked off the pace.

Excuses were made. A heavy tackle early in the first half took its toll, labelled a ‘good old fashioned tackle’ it was a clear foul, but nothing came of it. Iwobi took to Snapchat later to show a picture of his right ankle in a bandage.

Yet, if he was injured, he should have been benched, plus, it doesn’t excuse his bad performances in 2017.

When you compare his goal record to other players of a similar age, at clubs of the same level, the Nigerian falls way behind. 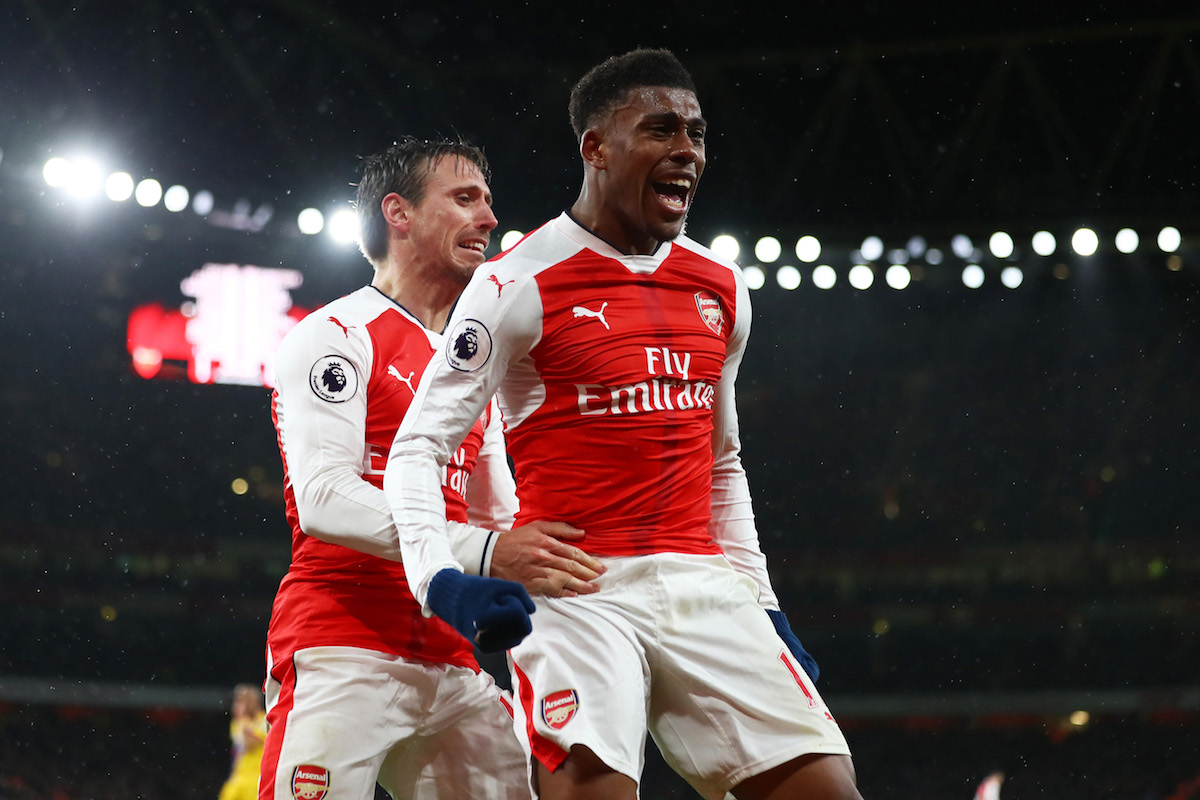 Read More: Reasons for Arsenal fans to be positive

Fellow Nigerian Kelechi Iheanacho, although struggled for time on the pitch of late, he’s scored six goals in 20 games, that’s one every 135 minutes. Gabriel Jesus arrived at Manchester City in a blaze of publicity and he averaged a goal every 98 minutes before his injury. 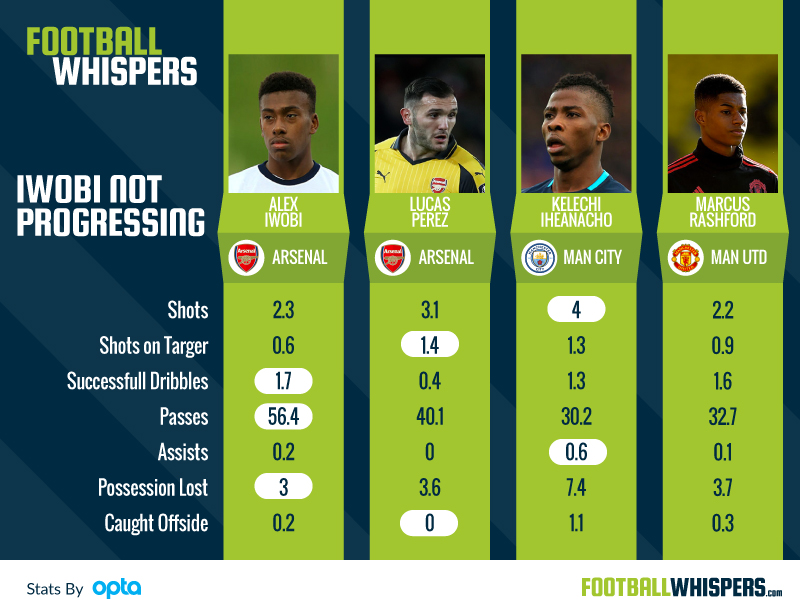 Anthony Martial’s poor performances have been well-publicised, but he scores every 224 minutes. Even the younger Marcus Rashford’s average is 256 minutes per goal. The 19-year-old has seven goals in 33 games.

Arsenal fans are now wondering why Monday night’s goal-scorer, Lucas Perez, still fails to get picked before Iwobi. The 28-year-old Spanish forward has scored eight times in 19 appearances – one every 122 minutes.

”It’s simple to see why Iwobi is playing ahead of Perez. Iwobi plays the Arsenal way, which is running into space and playing others in but Perez is a Spanish breed, he wants the ball at his feet”, the left-back told OwnGoalNigeria.com.

”Perez has to change his style of play if he wants to be picked ahead of Iwobi. He has to adapt to the Arsenal way, attack the space behind the defenders and play others in quickly.” 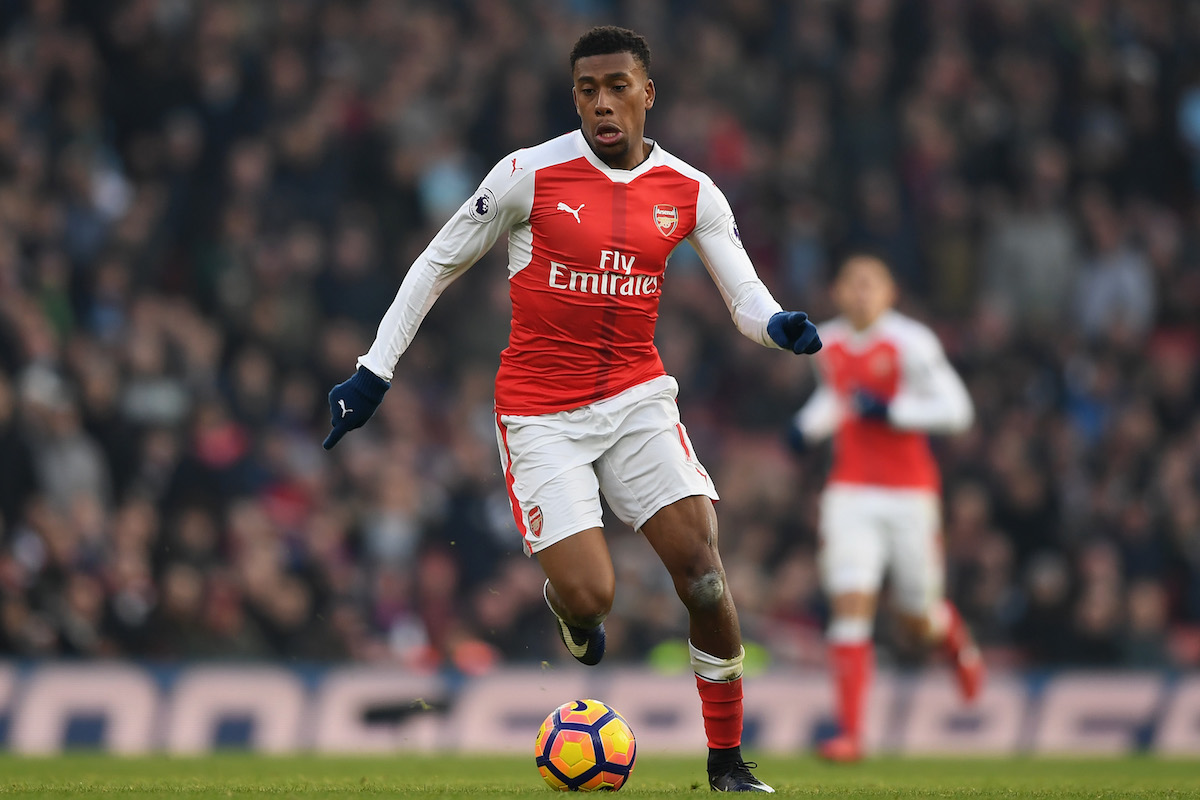 Iwobi made his debut in the EFL Cup against Sheffield Wednesday in October 2015, they lost 3-0 and he would make his Premier League bow just four days later. It was just a one-minute cameo, playing 13 more minutes before the turn of the year.

He had to wait until March to make his first league start, but he would mark it with a goal against Everton at Goodison. He followed that up with a second and his first home goal against Watford the next week and picked up two assists in the 3-3 draw with West Ham.

That was his coming of age in an Arsenal shirt, but the truth is, he hasn’t quite kicked on from that early run.

The Nigerian in easy on the eye. He’s a strong, powerful runner. With his large frame and long legs make him a great asset on the break. He’s direct, he pushes the ball forward, but he lacks skill and quality on the ball, in both his decision making and control of possession.

“People forget he’s 20 years old. I think he had a very good game,” said Wenger after the win over Crystal Palace in January. “On top of that, now he starts to score goals.”

“His quality of pass, of availability, is exceptional for a young boy. He lacked a bit of quality of [receptiveness] in dangerous areas and I hope that these goals he scores now will give him the taste as well to go where he can finish it off.”

The goals that his boss spoke of are less than convincing when you watch them back. Iwobi’s finish against Watford made it look like he was aiming for the near post when it went to the opposite corner.

Against Palace, he took his header well after a blocked shot rebounded into the air. However, before that, he showed a lack of awareness as he slowly walked back from an offside position while his team was still in attack.

It was his finish against Stoke City that showed potential, a calm, low, guided finish into the far corner. He has shown that a few times in his young career, but that doesn’t make up for the flaws.

Where Iwobi must improve

There is no refinement in his game at this point. Iwobi is still very raw. There is potential, but everyone is still waiting for that to come to the fore.

The failings of the 20-year-old reflect on Wenger’s recent drop. Famed for his development of young players, Iwobi hasn’t progressed the same way that players did back in the French manager’s prime.

It’s something that has been evident since the likes of Theo Walcott, Alex-Oxlade Chamberlain and Yaya Sanogo failed to grow on initial potential. Walcott scored his 100th Arsenal goal on Monday, but since he’s been with the club since 2006.

Only once has the 27-year-old scored more than 10 league goals in a season. That was in 2013, finding the net 26 times in the Premier League since then.

At this point, there is more chance of Iwobi failing to become a world class talent like Walcott, than becoming another Thierry Henry or Cesc Fàbregas.