When Pep Guardiola took charge of Manchester City in the summer of 2016, he swiftly ousted goalkeeper Joe Hart, who didn't fit his tactical plan, and it was expected Sergio Agüero would soon follow the England shot-stopper out the Etihad exit door.

The Argentine striker, many suggested, was too committed to his own goal-scoring efforts to fit into Guardiola's system, too selfish and unaccustomed to linking and creating as is necessary at the point of the Catalan tactician's attack.

However, Guardiola is now in his third season at the City helm, with the team playing better than ever and on course to cruise to another Premier League title, and Agüero is as important to this City side as he has ever been.

It is to the former Atlético Madrid striker's credit that he has been able to adapt his game to suit the demands of the world's foremost coach and mould his skillset to become a conduit for City's fluid attacking play, rather than simply the exclamation mark at the end of it.

There are few strikers in the game as adept at breaking in behind defences, playing “on the shoulder” and racing through to score as Agüero. But, more than ever, we now see him drift deep and wide, interweaving with Raheem Sterling, or Leroy Sané, or Riyad Mahrez. 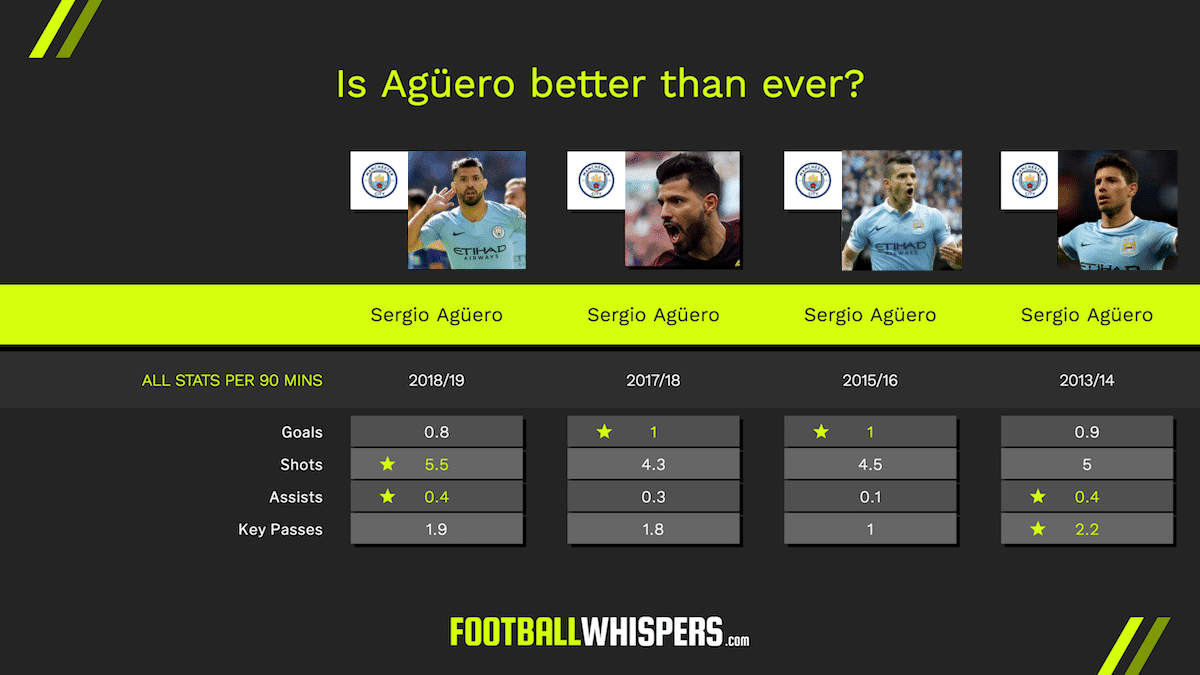 The stats evidence the tactical adaptation Agüero has made, too.

As the above graphic shows, City's all-time highest scorer, now 30 years old, is averaging a level of productivity in keeping with his best individual seasons since moving to the Etihad in 2011.

Currently the Premier League's leading scorer, he has only bettered his strike rate of 0.8 goals per 90 minutes three times in sky blue, with City's relentless chance-creating machine of an attack meaning he is able to shoot for goal more often than ever.

The key development, however, is in his creativity, with his assists and key passes per 90 approaching career-best levels.

And, as the first Manchester derby of the 2018/19 season showed, Agüero is still the man for the big occasion, rifling home CIty's second in a 3-1 win over arch-rivals Manchester United at the Etihad.

More than just a goal-scorer, Agüero, under Guardiola, is the consummate all-rounder, further cementing his legacy as one of the Premier League's greatest-ever imports.