This summer could be a difficult one for Tottenham Hotspur. The likes of Harry Kane, Dele Alli and Christian Eriksen will almost certainly stick around, but Kyle Walker looks set to depart the club – Manchester City are supposedly sniffing around the England international – and Spurs may find it difficult to significantly improve their squad without breaking Daniel Levy’s notoriously strict wage structure.

With that in mind, it is no surprise to see Mauricio Pochettino’s men linked with a move for Bournemouth defender Adam Smith, who would presumably compete with Kieran Tripper for the right-back spot should he swap the south coast for north London when the window reopens in just over six weeks’ time.

Although the 26-year-old is contracted at the Vitality Stadium until 2020, it would probably not take a huge bid from Tottenham to prise him away from the Cherries – which is exactly why this transfer story should not be written off as unrealistic. 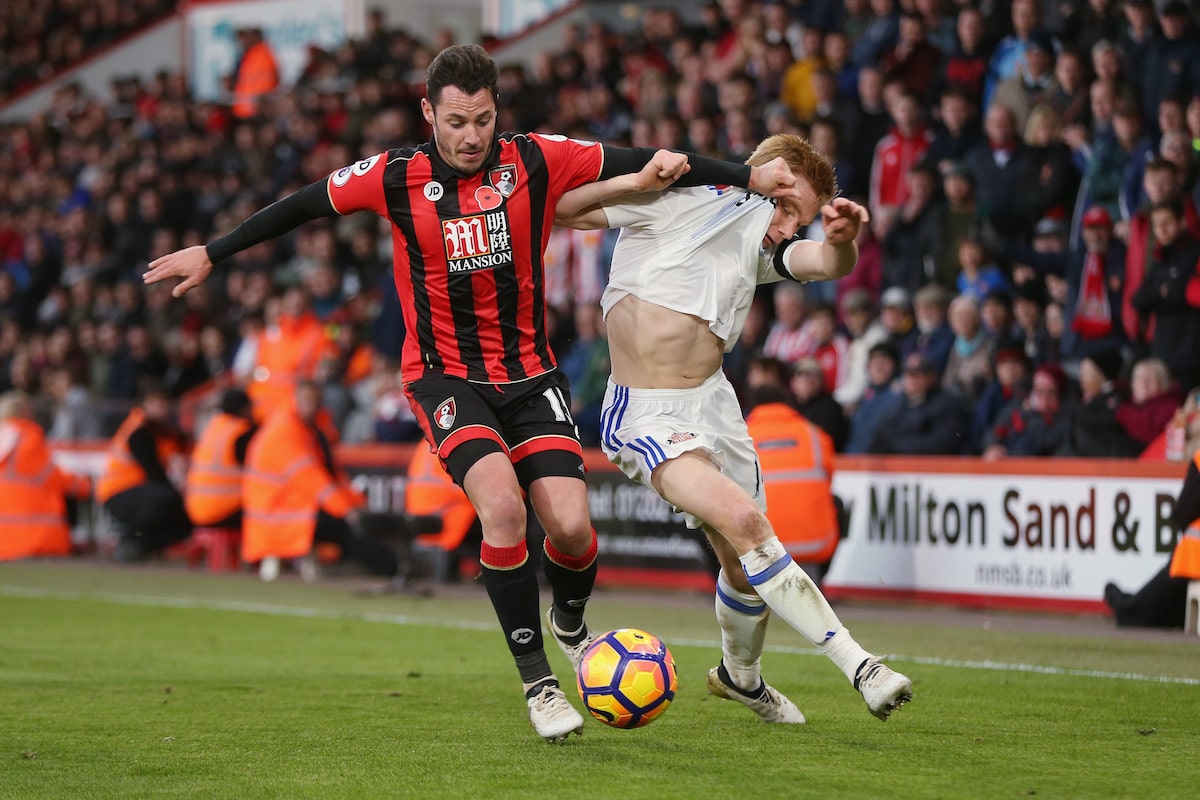 The obvious question to ask, then, is whether Smith is good enough to play for a team like Tottenham, who will be looking to go one better than this season’s probable second-place finish by winning the Premier League title in 2017/18.

Squad depth will be vital given that Pochettino’s charges will again be competing in the Champions League and gunning for glory in both domestic cup competitions, but each and every player within the ranks should ideally have the requisite quality to step up and seamlessly slot into the starting XI whenever called upon.

Smith began his career at Tottenham, initially joining the club at the age of 16 in 2007. He made his senior debut for Wycombe Wanderers during a loan spell in 2009/10, before further temporary stints at Torquay United, Bournemouth, Milton Keynes Dons, Leeds United, Millwall and Derby County. 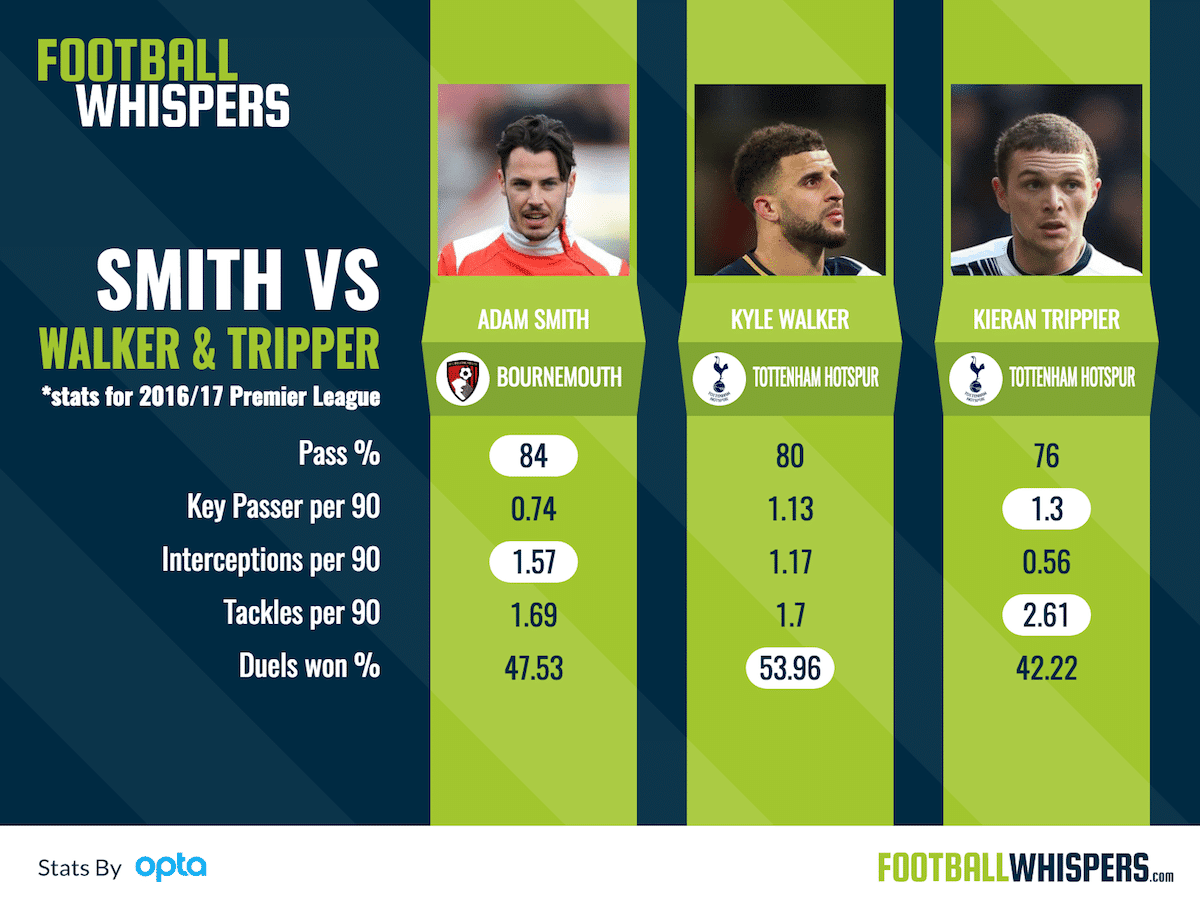 The defender pulled on a Spurs shirt just twice throughout his time at White Hart Lane, and a lack of first-team opportunities persuaded him to make the permanent switch to Bournemouth in January 2014. While he struggled for game time early on, the move proved to be a major success: Smith starred in Eddie Howe’s side’s promotion to the Premier League in his first full season on the south coast, and has since helped the club to establish itself in the top tier of English football.

Smith’s profile certainly fits with the type of player Pochettino would presumably be after: he is aggressive, athletic, energetic and attack-minded, and would be capable of playing either as a wing-back or a more traditional full-back.

His composure on the ball is evidenced by an 84 per cent pass completion rate this term – more than both Walker (80 per cent) and Trippier (76 per cent) – although his ratio of 0.74 key passes per 90 minutes suggests that he is not quite as adept at creating chances as the current Spurs duo, who average 1.13 (Walker) and 1.3 (Trippier).

It is also interesting to note that he takes 0.8 shots per 90 minutes, which is higher than both of Tottenham’s right-backs this season; while such a statistic may not immediately seem important, it is worth remembering just how much time Spurs’ full-backs tend to spend in advanced areas.

While attacking quality is vital for players in Smith’s position in the modern game, it should not come at the expense of defensive knowhow; fortunately for Tottenham, that does not appear to be the case as far as the 26-year-old is concerned.

Trippier has, for the most part, been highly impressive in his 20 appearances in all competitions this season. The former Burnley man cannot quite match the blistering speed of Walker, but he is energetic enough to thrive in Pochettino’s all-action and high-tempo style of play, while his delivery into the box from wide areas is almost invariably excellent.

He is defensively solid, too: a terrific recent showing against Alexis Sánchez in the final north London derby at White Hart Lane was evidence of Trippier’s ability to both nullify an opponent’s attacking threat and provide one for his own team in the other half of the field.

The two-time England Under-21 international joined Spurs in 2015 and has spent the majority of his two seasons at the club as an understudy to Walker. Trippier has clearly benefited from working with Pochettino and his staff on a daily basis, and he is a much better player now than when he first turned up at White Hart Lane two years ago.

Tottenham will hope that Smith is able to follow a similar path: begin as a back-up, improve your all-round game and eventually be ready to start on a regular basis. The fact that he is already 26 – the same age as Trippier – means the Bournemouth man is perhaps a little older than would be ideal, yet Pochettino probably sees him as a project to get his teeth stuck into, and the Argentinian’s track record at improving players wherever he has been suggests that the Spurs youth product can take his game to another level.

Bringing Smith back to Tottenham would not be the glamour signing that some supporters are holding out for, but it could prove to be yet another astute move from Pochettino and the club’s hierarchy.