Throughout the first decade of Premier League action, the 4-4-2 formation was unanimously king. Then Jose Mourinho came to England and everything changed. The Special One quickly set about rewriting the manual for domestic success and, by recruiting arguably the two most important signings of the 21st century, soon paved the way for the entire league to alter its DNA.

Didier Drogba joined from Marseille to completely change the blueprint for what should be expected of a top Premier League striker. Suddenly, an athletic powerhouse blessed with natural talent could occupy an opposition’s entire backline. In turn, this would free up space for those attacking wingers to enjoy far greater success. Meanwhile, the anchor role of Claude Makelele would allow central midfielders -namely Frank Lampard- to find pockets of space.

Teams employing the now outdated 4-4-2 struggled to deal with the dominance, which saw most managers adopt the 4-5-1/4-3-3 formation. Meanwhile, the identity of English football’s elite level shifted towards a more technical focus. As the huge commercial revenue allowed clubs to recruit continental inside forwards and No.10s, the former ideals of fast wing-play and central attacking partnerships were cast aside. Those evolutions certainly helped in European competition as Premier League representatives appeared in seven of eight Champions League finals between 2005 and 2012.

This dominance couldn’t last forever, however, and English football has since been left behind by German and Spanish competition. More importantly, though, the tide is turning on the domestic scene too. After a decade of being in the wilderness, the formerly ubiquitous 4-4-2 has finally made a comeback. And it isn’t hard to see why.

When the continental tactics were first implemented just over a decade ago, it completely stunned most Premier League clubs. Managers weren’t tactically prepared and it showed as the 4-4-2 often surrendered possession. Perhaps more crucially, players didn’t have the adaptability to cope. As the old formation makes its way back into relevance, we’re starting to see the reverse effects.

It all starts on the training ground. For the past 10-15 years, young defenders have become accustomed to development based on facing the lone striker. This has seen a huge transition not only in the skills sought after by coaches, but also in tactical awareness. The commanding centre-halves of early Premier League football are a dying breed. Nowadays, the attributes of a Steve Bruce, Tony Adams or Nemanja Vidic are considered inferior to the cultured skills expected in Italy or Spain. In the modern era, the prospect of a ball-playing defender like John Stones is where the big money will be invested.

However, those players will have far less joy when facing a second attacker. With those defensive areas becoming more congested, even the most cultured defender will feel less comfortable on the ball. Similarly, when it comes to defending, modern centre-halves are less educated in the art of containing two opponents. If the communication between both central defenders isn’t at the very highest level, problems will begin to surface. So far in 2015/16, two Premier League teams have excelled at exploiting them.

The overachievements of Leicester City and Watford can’t be dismissed as a fluke. Both Claudio Ranieri and Quique Sanchez Flores have masterminded incredible results this season, and the two head coaches share two common traits.

Firstly, they’ve picked formations to suit the talent within their respective squads. The value of this philosophy cannot be emphasised enough.In recent years, the majority of lower to mid-table Premier League coaches have adopted a reactive approach to management. Aside from Sam Allardyce and a couple of other notable exceptions, most fail to extract effective results from this method. Consequently, many clubs struggle to find their true identity. Ultimately, that carries a huge influence on the high dismissal rate currently seen amongst Premier League bosses.

Secondly, both the Foxes and Hornets have been quick to detect the deficiencies in the popular 4-2-3-1 variant. Without ever sacrificing their own principles, the overachieving duo have often maximised their performance levels by ripping those gaping holes apart. In turn, they are pioneering the return of a 4-4-2 strategy; don’t be surprised if we see the old favourite return to prominence over the next couple of seasons. 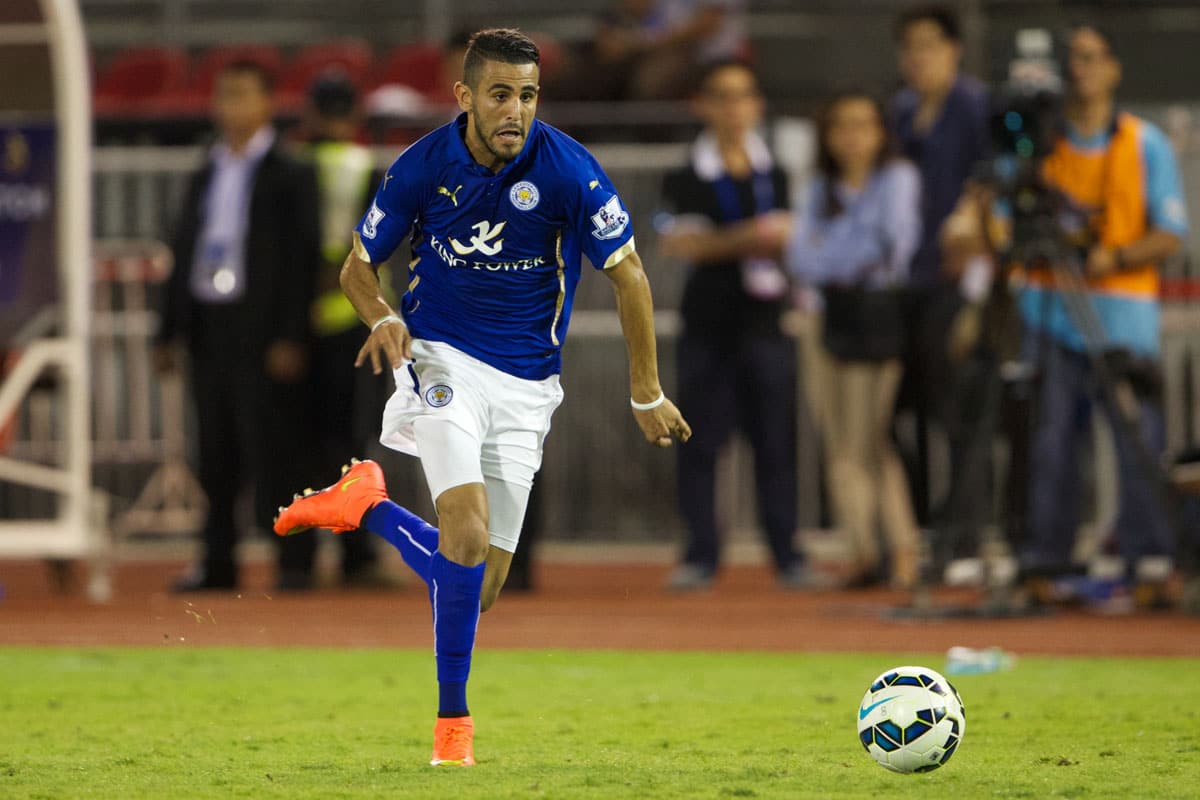 The formation hasn’t returned without some evolution, however. The Watford partnership of Troy Deeney and Odion Ighalo underlines the effectiveness of physical presence against modern defenders. Moreover, it adds further strength to the arguments that a strike partnership can be even more lethal than one being supported by a No.10.

There’s no substitute for an attacking duo that shares a telepathic connection. Premier League fans have seen that plenty of times over the years and whether it’s Bergkamp and Henry, Yorke and Cole or Fowler and Owen, those lethal partnerships are a joy to behold.

And they’re a nightmare for opposing defenders too.

One of the chief discords for using the 4-4-2 is a perceived lack of presence in the midfield area. However, this incarnation of the resurrected formation makes good use of the modern striker’s versatility. When Watford defend, Deeney often drops back to form a five-man midfield. The fact that the Hornets conceded just 25 goals in the first 22 matches of their inaugural campaign back in the top flight is testimony to how effective this regimented tactic can be. This desire to pack the midfield when defending is also something that Leicester have used on a regular basis.

The most telling influence of embracing the 4-4-2, though, is in the attacking. Very few neutrals would name either Ighalo or Leicester’s Jamie Vardy as one of the Premier League’s top stars. But with over half of the season completed, they both reside in the top three spots in the individual scoring charts. There is absolutely no doubt that the tactical approach of their respective clubs is a major contributing factor.

Whether it’s Deeney at Watford or Shinji Okazaki at Leicester, the supportive striker can achieve great joy in the attacking third. As opposing teams are less equipped to deal with the situation, the secondary attacker can often find bags of space between the lines of defence and midfield. The confusion can often lead to goalscoring opportunities; at this level, any striker will gladly convert those chances.

In truth, exploiting space between the lines is something that sets the best No.10s aside from the rest too. Unfortunately, only the very top clubs boast a player with the attributes to do this. Squads blessed with the talent of a Mesut Ozil or David Silva will always thrive under the 4-2-3-1 conditions, as those attacking playmakers have the ability to orchestrate things from an advanced position. For those sides lacking a genuine world class architect, switching to 4-4-2 has to seem like an attractive proposition.

It’s not only clubs on the same level as Leicester and Watford that could benefit. Calls for 4-4-2 have dominated analysis of Louis van Gaal’s Manchester United this season, and it’s difficult to understand why the Dutchman is so reluctant to implement Anthony Martial and Wayne Rooney as an attacking duo. The former’s natural physical presence, combined with the captain’s natural desire to collect the ball deep, appears to be a recipe for huge success. Instead, Van Gaal’s stubbornness has seen the Red Devils become one of the most stale outfits in the Premier League. It’s a far cry from the attractive brand of football deployed by Sir Alex Ferguson. Reverting back to a two-man attack with pacy wingers could be the perfect solution.

The problem with using the lone striker is that defences are assembled with a core emphasis on nullifying this type of opponent. For this attacking strategy to gain optimum success, it needs a  genuine talent to fill that demanding role.

Of course, the one-man attack can be extremely effective with the right players. After all, let’s not forget that Everton’s is the division’s joint leading marksman with Vardy on 15 goals. Meanwhile, the impact of Diego Costa’s physical presence essentially dragged Chelsea to the Premier League title. However, the champions’ dramatic decline in 2015/16 personified the notion that relying on one source of goals cannot be a long-term solution. This is even more palpable when dealing with teams outside of the division’s elite.

Winning football matches hinges on the ability to score goals, and increasing efficiency in the attacking third is a clear incentive to employ the 4-4-2 tactic. Nevertheless, the midfield areas still provide the most influential battle. Dominating this part of the field is key to dictating games, which will ultimately lead to the unlocking of defences. The idea that a two-man midfield can outwork a three-man one may seem alien but with two banks of four spearheaded by a versatile attacking duo, the defensive midfielders of any 4-5-1 variant are often rendered redundant. Furthermore, the defensive unit of a 4-4-2 will regularly enjoy far greater authority in deciding whether to press or sit back. When utilised as effectively as Leicester and Watford, the results are truly outstanding.

Football is constantly evolving and will always encounter transitional periods. This season, the rebirth of 4-4-2 has shaken the hierarchy of Premier League football to create one of the most exciting campaigns in living memory. Other managers will inevitably look to emulate the triumphs of Ranieri and Flores over the coming months, which should lead to a more expansive brand of football throughout England’s top flight. This can only be great news for supporters and neutrals alike.

Long may it continue.