Relegation threatened Wimbledon stuffed Ipswich just a matter of days ago. Will it be the same on Saturday? Find out with our Ipswich vs Wimbledon match preview with free tips, predictions and odds mentioned along the way.

Forget league positions Wimbledon will arrive in this game with their confidence of a victory sky high. They only played Ipswich just over a week ago and turned them over 3-0; it's hardly a blip in form either though because Wimbledon have won their last four games on the spin. Ipswich meanwhile can't seem to get a result for love nor money having failed to collect three points in their last five despite what looked like a favourable run of fixtures.

The opening prediction for Ipswich vs Wimbledon highlighted the poor form Ipswich are in. What it didn't do was go into the details of just how shambolic that form is. The Tractor Boys have scored just four goals in their last 10 games and have failed to score in seven of those matches including the last five. Wimbledon aren't known for keeping clean sheets but one of their three shutouts across their past 10 did come against Ipswich; they've only conceded eight goals in that 10 game spell as well so they're hardly getting cut open.

Hardly a game for the neutrals

Yes, Wimbledon beat Ipswich 3-0 last time, which would make this prediction look like a bad one but it will be a slightly different affair this time round. A large part of that will be the fact Ipswich are at home; it's not going to transform their fortunes but their form is better at Portman Road. They've only conceded six in 10 on their own patch with just two matches going above the 2.5 mark. Wimbledon's away performances offer hope of this prediction coming in too; four of their last five have seen south of three goals.

Ipswich vs Wimbledon: The all important pre-game info

Another dull day for Ipswich

Wimbledon's form of late, which includes a win over Ipswich, has seen them put a few points between themselves and the drop zone at a crucial stage of the season. Their fans will want the season to end just to have safety mathematically confirmed. Ipswich fans – and their players and staff – just want the season to end to put them out of their misery after a woeful run of form. Wimbledon gave them a torrid time a few days ago; it could be the same again. 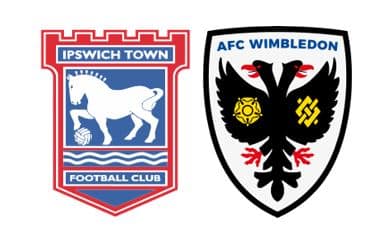