Ipswich's last few days has been dominated by takeover talk. Will MK Dons come along to spoil the feelgood factor? Find out with our Ipswich vs MK Dons match preview with free tips, predictions and odds mentioned along the way.

Ipswich might only have one win from their last five but they've been scraping by at Portman Road with 11 points taken from the previous 15 available. The Tractor Boys would struggle to hit a barn door at the moment though with creativity a big problem; MK Dons have lost three of their last five away game though. More notably, the losses have seen 10 goals shipped. With the Dons firmly in mid-table, they might be more liable to leave gaps. Ipswich have an outside shot at the playoffs and their manager has been asking players for bravery on the ball. If they show that, they should just about have enough to win this one.

As touched on, Ipswich are not a million miles off the playoffs. Despite that, their attack is the second worst of all the teams above the drop zone. It's not a problem that's getting better either; last week they faced Rochdale who sit bottom with the worst defence in the league. Ipswich didn't manage a shot on target. Seven of the last 10 games at Portman Road have fell below the 2.5 goal mark. It's hard to see this match bucking that trend.

Our final prediction uses some of the logic already discussed in the first tips. Ipswich should have enough to beat a MK Dons side who have lost three of five away trips. As for the match ending under 3.5 goals, well, Ipswich haven't won a game breaking that threshold since October.

A win to cap a good week for Ipswich?

Regardless of the result in this game it won't be the biggest news to come out of Ipswich this week; they've just announced a takeover. Whether that will motivate the current playing staff to up their game or cause them to down tools knowing they're on borrowed time remains to be seen. Either way, their match with MK Dons has just become a lot more interesting.

Ipswich vs MK Dons: The questions you need answers to 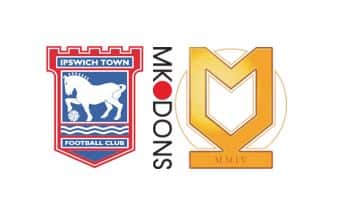