Making the prediction that this match will be an encounter with few goals feels like a no-brainer. Bristol Rovers' last five have ended north of the 2.5 benchmark just once. They've scored just two goals in that time. Ipswich's record isn't dissimilar in that they too have only seen one of their last five matches contain over 2.5 goals. They have managed to net a whopping three though. It doesn't bode well as a spectacle. As tips go though, it might be more interesting.

We've already touched on the fact the match is likely to be one of few goals; we still expect the Tractor Boys to edge the game though. They're unbeaten at Portman Road in six having won three and drawn three. Throw factors such as Paul Cook spending time on the training ground with his team and Bristol Rovers being on an 11 match losing run away from home and it all points to a home victory.

Ipswich to win to nil

As tips go, this fixture is painting the picture of a pretty drab affair. Don't blame us though. Blame Ipswich and Bristol Rovers. We've just made the prediction that Ipswich will win; if you add the selection that Bristol Rovers won't score in then you can boost your odds. Will they score? Well, it is football so they could but five goals in their last 10 away games does make it look somewhat unlikely; Ipswich have the fifth best defensive record in the league too and, for further good measure, Ipswich have won the last two meetings without conceding.

All the stats and odds for Ipswich vs Bristol Rovers

A tale of two managers waiting for a pre-season

There is a saying in football that you get a ‘new manager bounce'. That's hardly been the case for either of these sides. Joey Barton was appointed Bristol Rovers boss back in February but has overseen just two wins in that time. Ipswich's new gaffer, Cook, has now taken charge of six games. He's seen just one win with the lack of attacking threat the biggest concern. After Town's lacklustre performance at Wigan last week, there is talk of Kayden Jackson partnering top scorer James Norwood up top. It would make the jobs of the Pirates' centre back pairing Josh Grant and Alfie Kilgour tougher.

FAQ about Ipswich vs Bristol Rovers 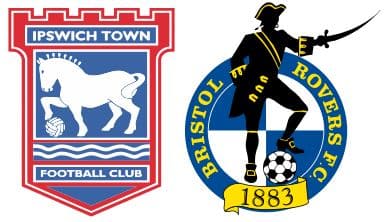