Ipswich and Barrow meet at Portman Road in the second round of the FA Cup. The Tractor Boys are favourites to plough their way past their League Two opponents this weekend. Read our expert predictions and find the latest odds for the game below in our match preview.

Barrow have lost three games on the bounce ahead of their tough test at Ipswich in the FA Cup. Find our top three predictions for the fixture below.

Ipswich to Win to Nil

With just one point collected from the last 12 available in League Two, Barrow have hit a major slump and remarkably, the strugglers failed to find the net in any of their four assignments during the same dismal period. Ipswich meanwhile, have claimed two clean sheets in their last four matches at Portman Road and with Barrow’s problems in the final third apparent, the Tractor Boys are a great option in the win to nil market.

As we discussed in our first prediction, Barrow have been misfiring badly in attack in recent weeks, though Ipswich have been far from prolific themselves. Indeed, five of their last seven fixtures have produced under 2.5 goals thanks to their wayward finishing and more reliable defensive work and we expect a similarly low-scoring affair in Suffolk on Saturday.

When Ipswich manage to record victories, they tend to notch their goals in braces and Town registered twice in five of their last eight wins. With a clean sheet already a distinct possibility, we’re tipping Paul Cook’s charges to mark their triumph with another double at Portman Road and that in turn creates an opportunity to back the hosts to win 2-0 in the correct score markets. The odds for our final tip are long for a reason however, so a small stake is advised.

Ipswich dumped League Two side Oldham out of the FA Cup in the competition’s previous round and Town look primed to eliminate another team from the fourth tier when they welcome Barrow to Portman Road on Saturday. With just four defeats in their last 18 matches in all competitions, Paul Cook’s side are proving tough to topple and Ipswich have lost just once in their last nine tussles on home soil.

In contrast, Barrow haven’t won a league fixture since early October and their only victories in 12 matches after that came against non-league Banbury in the previous round of the FA Cup and a youthful Leicester U21 outfit in the EFL Trophy. Mark Cooper’s team are averaging just over a goal per 90 minutes in League Two and their lack of cutting edge up front is severely hampering their progress. 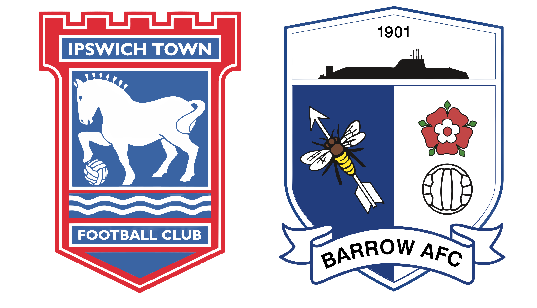 Ipswich vs Barrow is not being shown live on TV in the UK.

Ipswich are clear favourites to knock Barrow out of the FA Cup in the teams’ round two clash on Saturday.