It's been a mixed start to the 2017/18 Premier League season for Swansea City, losing two, drawing two and winning only one of their opening five fixtures. But the form, confidence and maturity of 19-year-old striker Tammy Abraham stands out as a beacon illuminating a smoother road ahead.

On loan from Chelsea for the season, the England under-21 regular only has one goal to his name from 403 minutes of action so far. But, part of a team who have already faced title contenders Manchester United and Tottenham Hotspur, and whose 18 chances created so far this term ranks last in the Premier League, quality opportunities in front of goal have been hard to come by.

However, Abraham has showcased his vast potential with some impressive displays leading the line for the Swans. Often starved of service, the 6ft 5ins youngster has still managed to stand out thanks to his touch, vision, skill and intelligence.

Utilised as a target man at the point of the South Wales side's frontline, his hold-up play and movement has been one of few positives in an attack that has registered just four goals thus far in the new campaign.

He might not have had it all his way at the Liberty Stadium as yet, and there remains plenty of room for development in his game.

But time is most certainly on the youngster's side, and his capacity to improve himself and foster a deeper understanding on the game and his role is already evident.

To look at Abraham, towering and powerful, it would be easy to assume that he is a typical football big man: strong in the air and a threat from set-pieces, but limited technically and lumbering in his movement.

But that couldn't be further from the truth. The Camberwell-born forward is quickly becoming the complete striker, and his versatile weaponry means he can hurt the opposition in a multitude of ways. 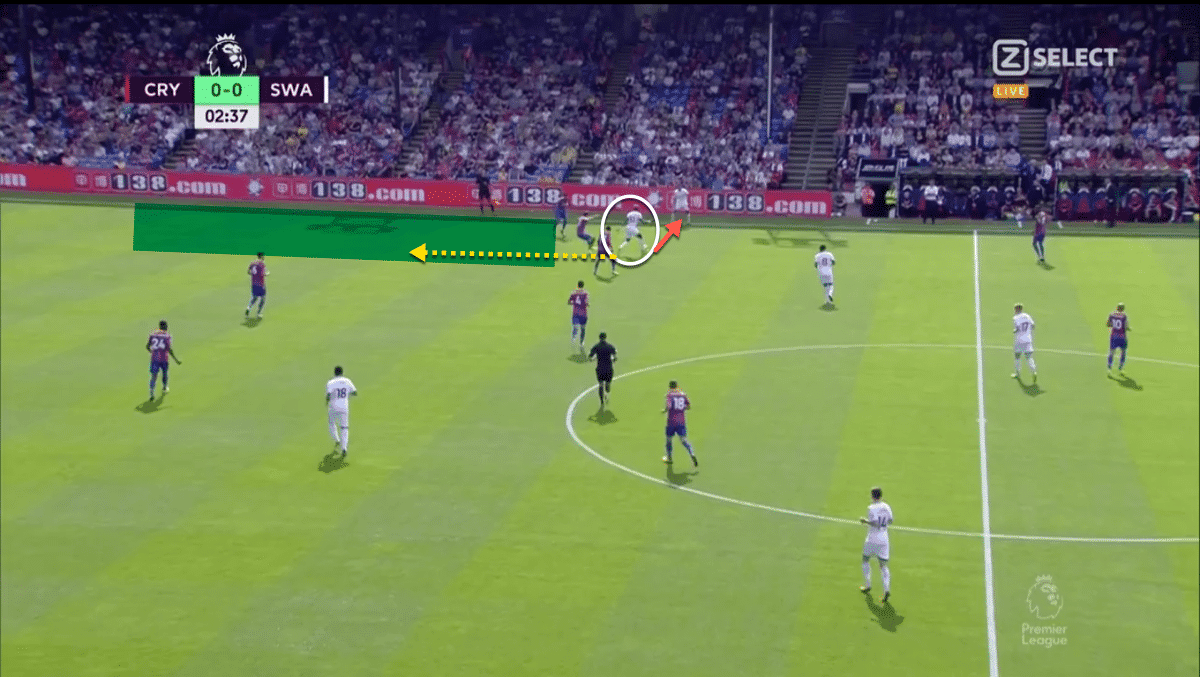 Above, in Swansea's 2-0 win away to Crystal Palace, Abraham (circled) shows his sharp awareness. Receiving the ball to feet just inside the opposition's half, he identifies a vast acreage of free space down the right flank (highlighted).

He draws his marker toward him before playing a quick one-two with a team-mate to break into the vacant zone, showing impressive pace for a player of his height. 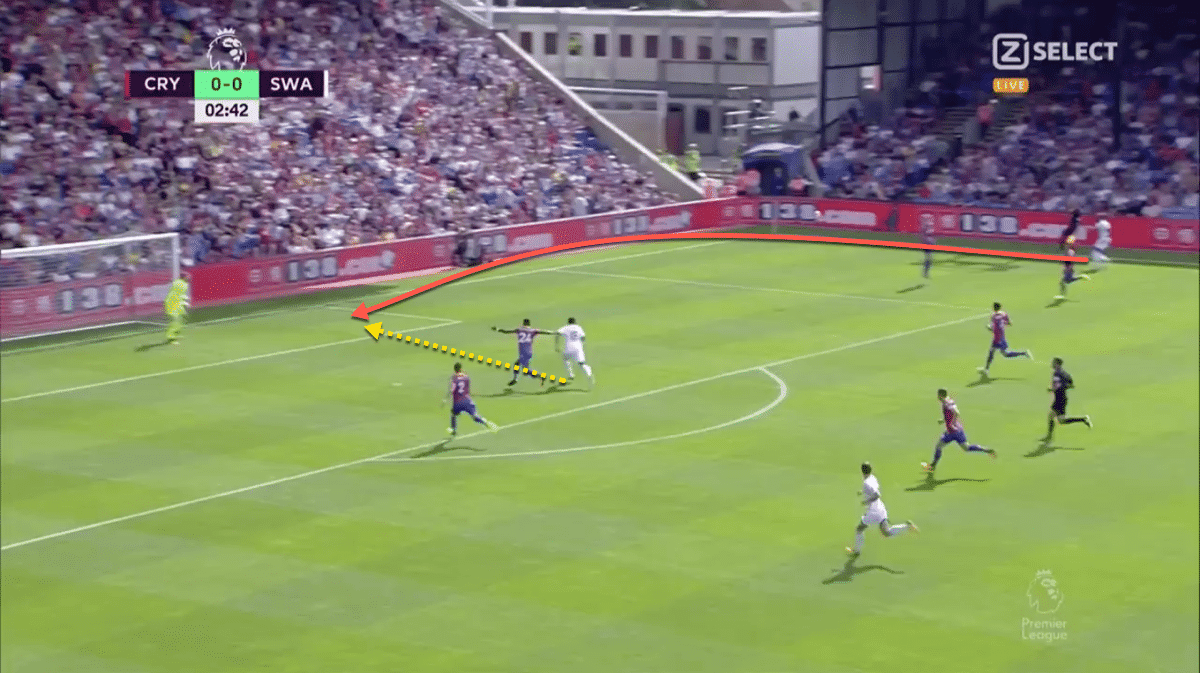 Bursting down the wing, Abraham composes himself before playing a perfect curling cross into the box, which Jordan Ayew connects with but heads wide. In one swift move, the Chelsea youngster demonstrated his game intelligence, speed and technique.

Perhaps the most impressive aspect of Abraham's arsenal at this stage of his career is his hold-up play, his ability to receive direct passes high up the pitch, control and link with on-rushing colleagues.

The 19-year-old has a mature understanding of when he is required to keep possession, holding off the attentions of opposition defenders to cling on to the ball into order to relive pressure on his side and await runners, and when a quick, first-time layoff is in order. 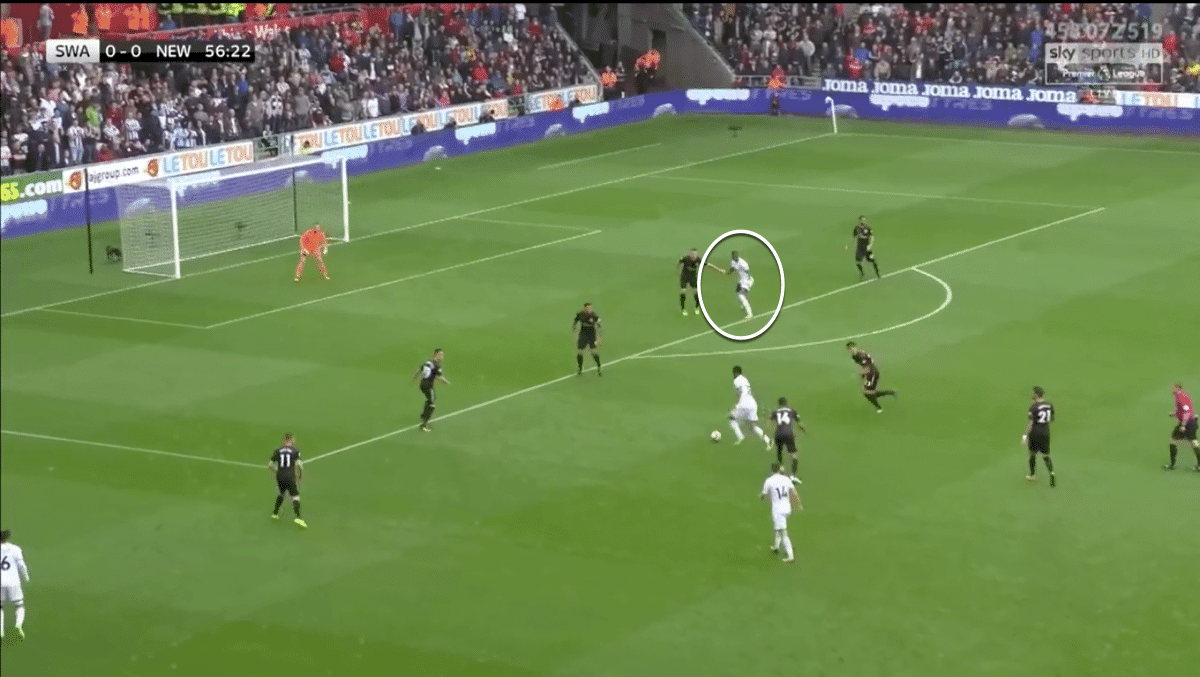 Above, we see the latter. Abraham's subtle, delicate touch in confined spaces makes him the perfect target for wall passes, shielding the ball and laying it right back into the path of the player who'd fed into him.

Ayew is looking to exploit the space between Newcastle United‘s defence and midfield, and wants to use Abraham to aid his progress towards a shooting position. 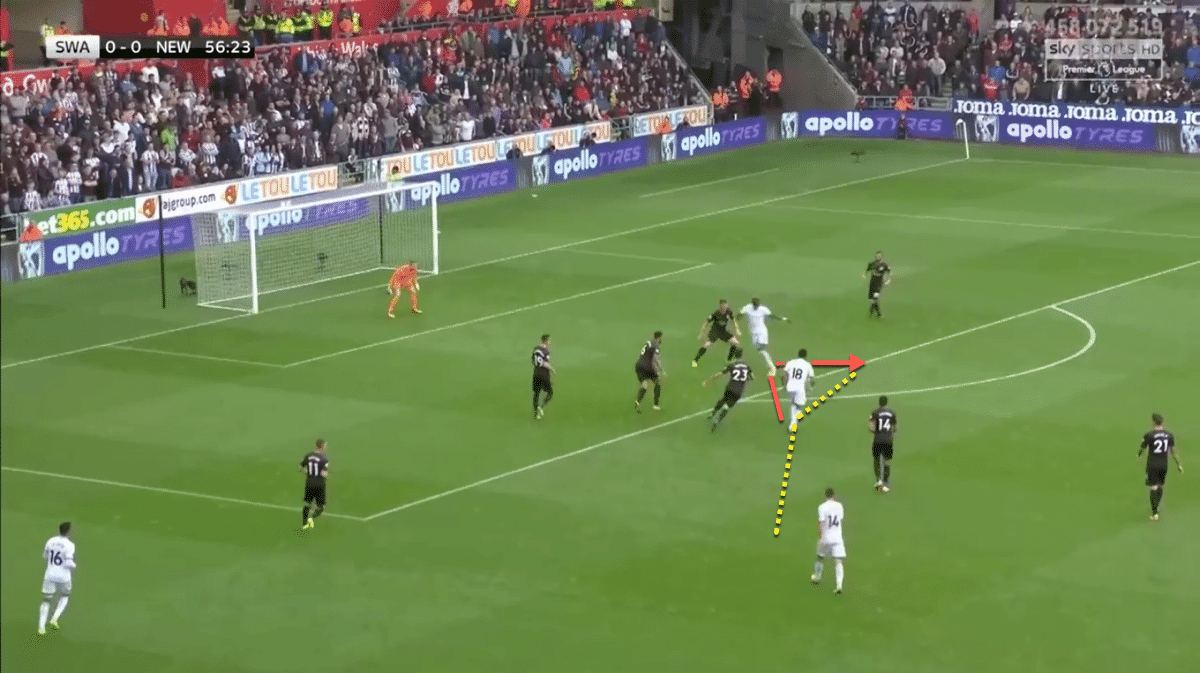 Ayew plays the ball into Abraham's feet, and the powerful striker uses his upper-body strength and sound body positioning to keep his marker at bay, while gently knocking the ball back into Ayew's path.

Abraham's may not yet have established himself as a regular scorer at Premier League level, but Swansea's aforementioned lack of creativity is a major contributing factor to that.

On loan at Bristol City in the Championship last season, he scored 23 goals in 41 appearances, maintaining an impressive conversion rate of 21.62 per cent. Of course, the Premier League is a higher level of competition, but Abraham's five starts and eight total shots this term is too small a sample size to judge his finishing statistics on.

His first Swansea goal, scored against Crystal Palace at Selhurst Park, did, however, demonstrate the young striker's sharp instincts and technique. 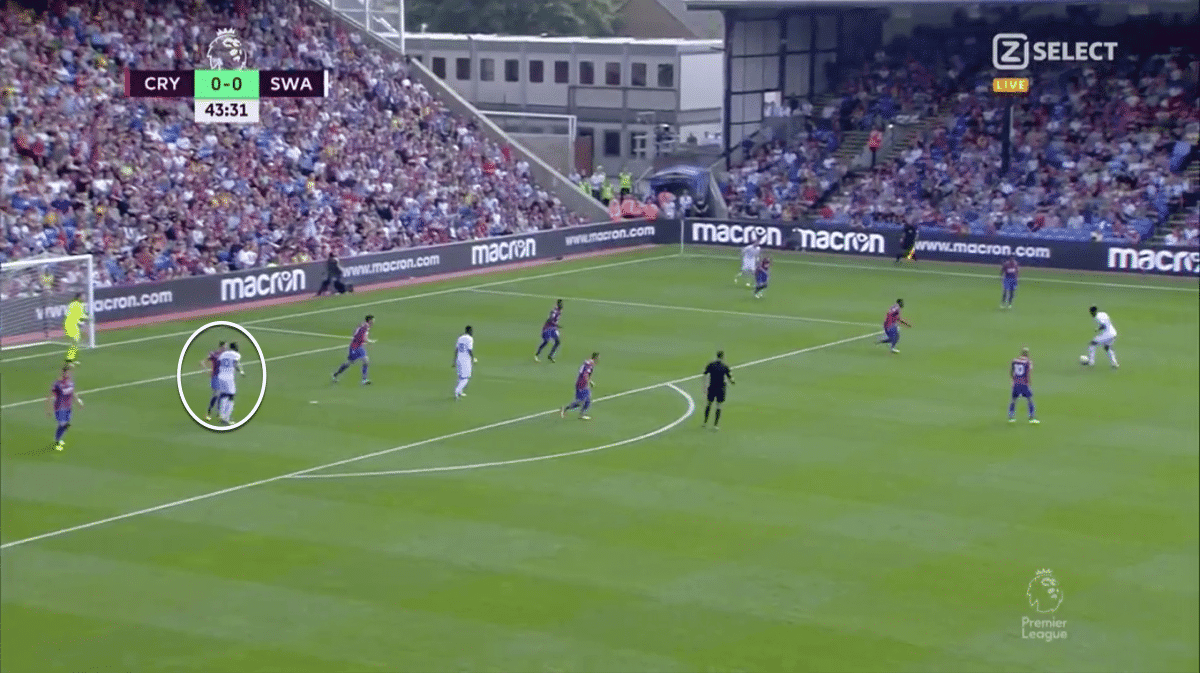 Here, we see Abraham (circled) position himself towards the back post as Swansea work the ball to Leroy Fer in the inside-right position, 25 yards from goal. The teenage centre-forward has already anticipated where the ball will be played and begins to make his move. 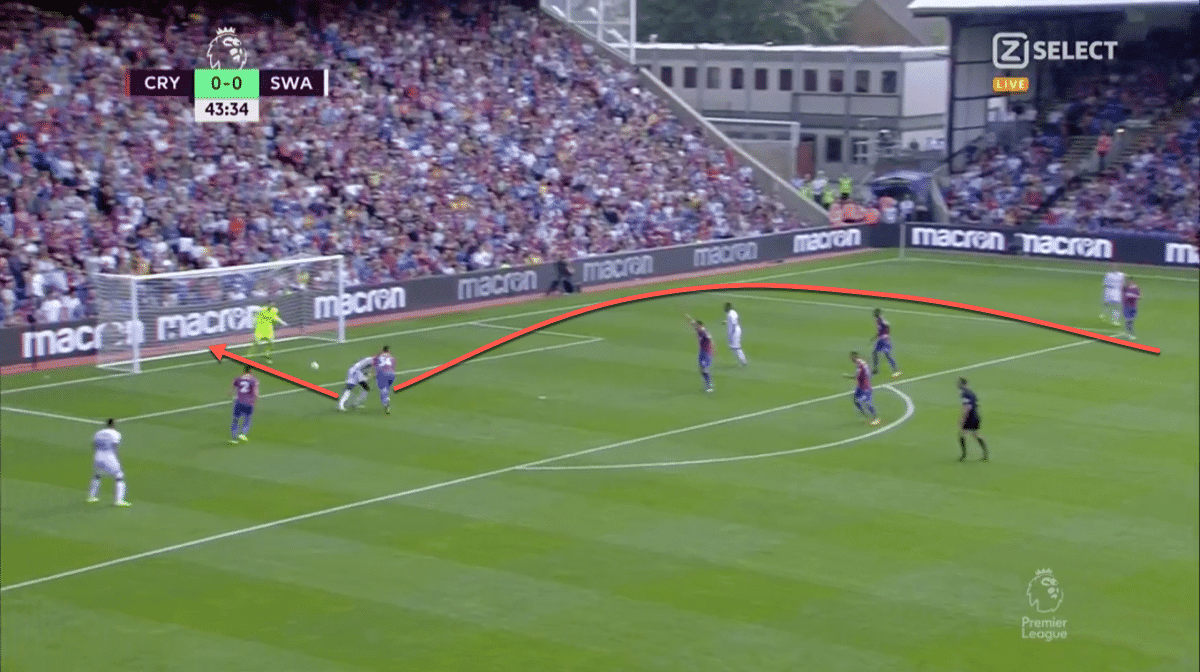 Wrestling with his marker, Abraham shows impressive strength and determination to get himself goal-side. From there, despite being off-balanced by the Palace player's challenge, he expertly cushions a volley beyond the goalkeeper.

Swansea lost their chief creator, Gylfi Sigurðsson, to Everton late in the transfer window, and are still adjusting their attacking patterns to the loss of the Icelandic playmaker.

They will undoubtedly find a more cohesive rhythm at some stage and Abraham, who will play no small part in that process himself as the primary target man in Paul Clement's side, will benefit from more, and better, chances in front of goal.

He has already shown that he can cope with the demands of Premier League life, though, and it is only a matter of time before he is recognised at international level. However, whether this is with England or Nigeria – for whom he qualifies through his father's nationality – remains to be seen.

The head of the Nigerian FA, Amaju Pinnick, claims that the London-born England under-21 star has agreed to represent Nigeria at next year's World Cup, should the Super Eagles qualify for the tournament in Russia. Either way, he is set to shine on the international stage sooner or later.

Whether his club future lies at Swansea, Chelsea or elsewhere, Abraham has the ability to become a top-level Premier League striker.