Nobody was surprised when reports surfaced linking Gareth Bale to Manchester United over the summer. Ever since the Welshman moved to Real Madrid in a world-record £85.3million deal four years ago he has been connected with a Premier League return, and Old Trafford is invariably the mooted destination.

For his part, Bale has always maintained that he is happy in the Spanish capital and his agent, Jonathan Barnett, has previously labelled talk of a Bernabéu departure for his client “a ridiculous, stupid story.”

But his future is under serious question after yet another injury earlier this season, his 24th since joining the club. While Bale did not leave the Bernabéu this summer, he could leave in the near future.

The 28-year-old winger may not be ready to depart La Liga, but there is a growing possibility of that choice being taken out of his hands.

Valued around the £85million mark, Bale's recent injury struggles have caused many to question whether the Red Devils should still be pursuing the former Tottenham Hotspur superstar, feeling that other, more reliable options exist.

But none possess Bale's quality. Even with his fitness concerns, United have to move for him if they get the chance. And reports in Spain suggest the long-mooted move could finally happen this summer.

No Better Option Than Bale

José Mourinho stated openly his intention to add four new players to his squad ahead of the 2017/18 campaign. He brought in three in Nemanja Matič, but failed to get the wide attacker on his agenda.

United were linked with a move for Inter Milan‘s Croatian winger Ivan Perišić throughout the last transfer window. However, talks between the clubs reportedly stalled over the Italians' insistence on receiving at least £49million for the 28-year-old while also demanding the inclusion of Anthony Martial on loan.

But he's not on Bale's level. And although Alexis Sánchez was signed in January, the Chilean has struggled to make the anticipated impact.

Bale is a three-time Champions League-winner; in his 105 La Liga appearances he has scored an incredible 56 goals – the kind of return any out-and-out striker would be proud of.

Dynamic pace, a powerful and accurate striker of the ball with his left-foot, a threat from set pieces and inventive in the final third: Bale is a one-man attacking Swiss army knife.

He's versatile too, able to play on either flank or centrally as a No.10, comfortable as the outlet in a counter-attacking system while also having the nous and creativity to unlock a stubborn, deep-sitting defence – all attributes that make him ideal for Mourinho's side. 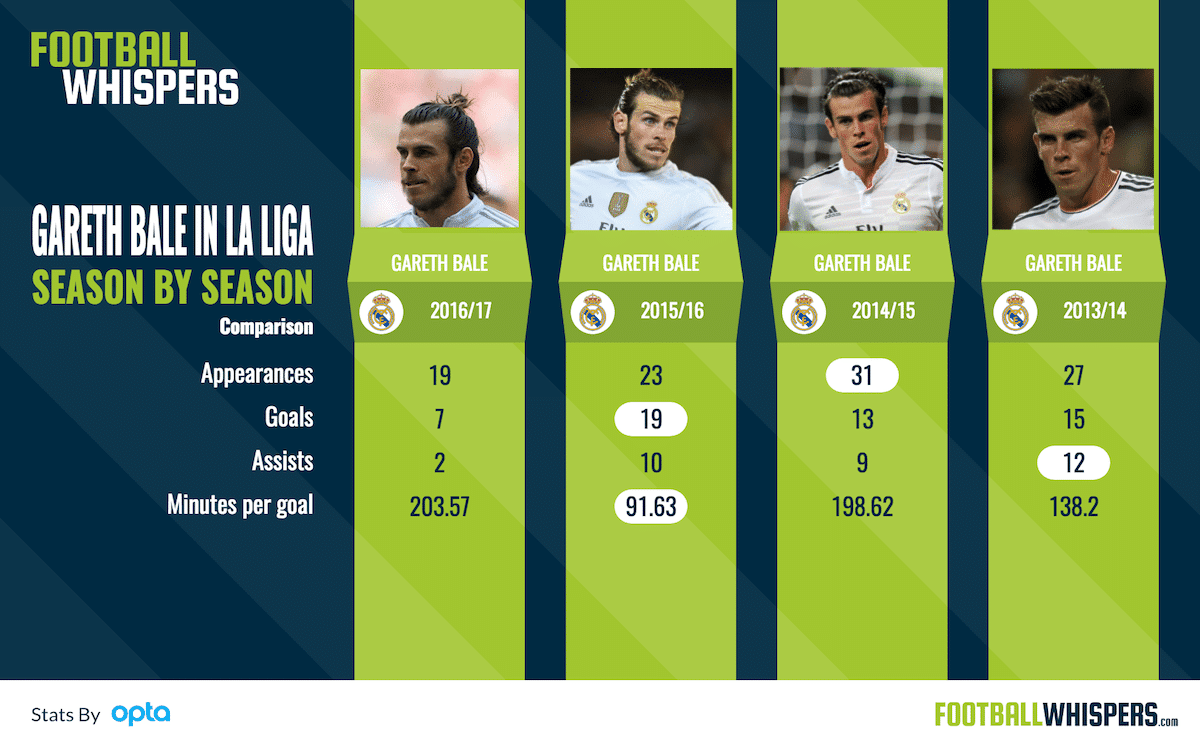 What is perhaps more attractive than anything when it comes to the possibility of signing Bale for United is his ability to take a team on his shoulders and carry them forward.

A little over a year ago, Bale was the catalyst for Wales' remarkable run to the semi-finals of the European Championships in France, scoring three goals and acting as the Dragons' superstar talisman.

What's more, he left England in 2013 as the best player in the Premier League. If he were to return he'd assume very similar standing.

In purely footballing terms, Bale is a no-brainer for United. There can be no doubt that his quality and experience would take any team to the next level.

There is only one misgiving: his injury record. With recurring muscular issues, the Madrid No.11 was restricted to just 27 appearances in all competitions last season, down from the already low figure of 31 from the campaign before. This term he has managed just 11.

At 28, it is unlikely that these problems will completely disappear, and the remaining years of his career will be a careful balancing act, managing his workload and the strain his body is placed under.

There was a feeling last term that Bale was rushed back from injury too soon, eager to play and demonstrate his worth – not least because Isco had performed so well in his absence. That can't be the case going forward: he must be given time and afforded patience if he is to recapture his best form.

But if United can get 30 games a season out of the Welshman, he could prove invaluable. If used selectively and rested when possible, Bale's contribution domestically and in the Champions League could be a real game-changer for Mourinho's men; Bale can do more in 30 games than most players can do in 60.

There is inherent risk when signing any player with a sketchy injury record, particularly one who would likely cost £85million. But passing up the opportunity to finally bring Bale to Old Trafford could be an even greater gamble for United.