Just a couple of weeks ago Zinedine Zidane’s Real Madrid were unbeaten in 40 matches and on course to cruise to a first La Liga title in five years.

But back-to-back defeats, first to Sevilla in the league and then to Celta Vigo in the Copa del Rey, followed by an unconvincing narrow victory over Malaga last weekend, has given Los Blancos’ season a whole new complexion.

Previously they seemed like a well-oiled winning machine, not always easy on the eye but resolute and determined. Indeed, much was made of the fact that, for a long period, Madrid had won more trophies in Zidane’s tenure than they had lost games.

But now, with increasingly ropey performances reaching a crescendo of successive defeats, they look not only human again, but vulnerable.

And never more so since news broke that the European champions will be without key players Luka Modric and Marcelo for a sustained period. 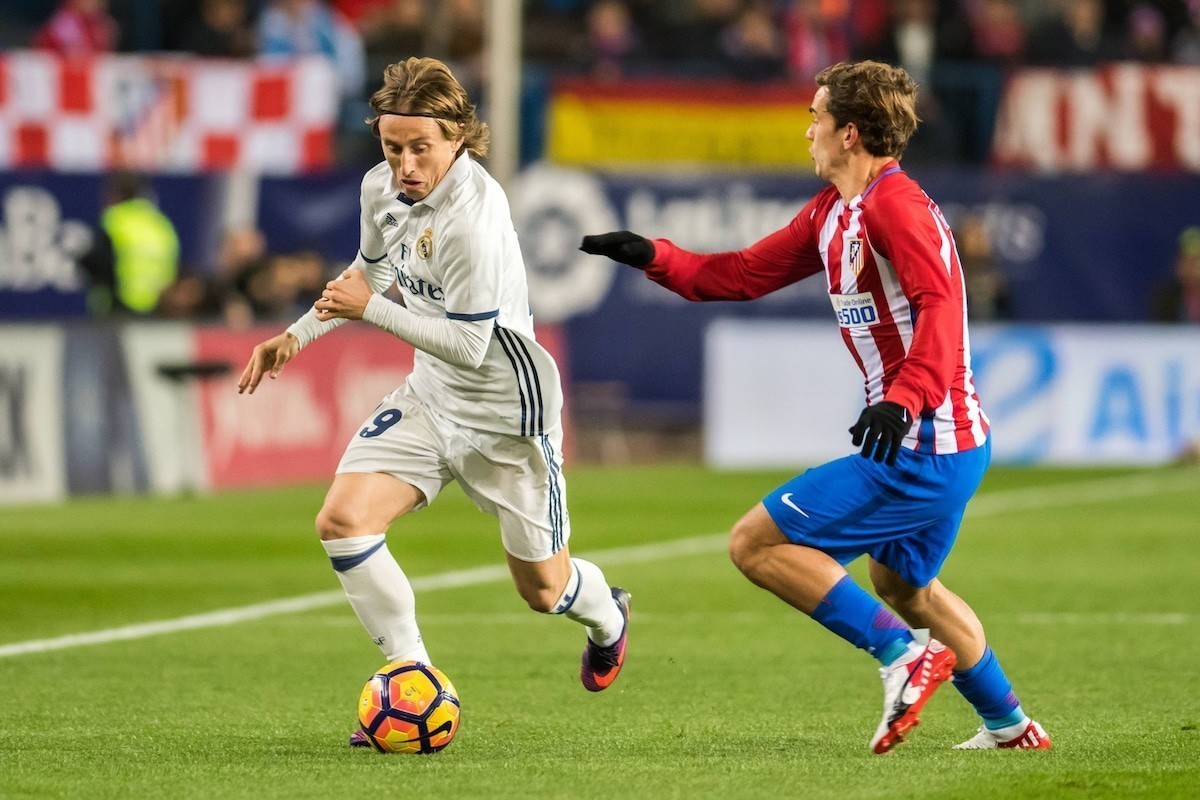 Both men were injured in the 2-1 win over Malaga at the Bernabeu, with Marcelo suffering a grade two hamstring tear while Modric left the field with a thigh strain – the pair are expected to be sidelined for at least a month.

They will join Pepe, Dani Carvajal and Gareth Bale in the physio room as Zidane faces an uphill struggle to right the wayward ship without a handful of his most trusted lieutenants.

Since his 2012 move from Tottenham Hotspur, 31-year-old playmaker Modric has steadily grown into his role at the heart of Madrid’s midfield. Over the last 18 months, the Croatian has been almost peerless as the conductor of his side’s attacking moves.

Much like Andres Iniesta at bitter rivals Barcelona, Modric’s presence is crucial for Madrid and appreciated most when absent. And, also like Iniesta, the former Spurs man is widely regarded as one of the very best midfielders on the planet.

By that token, replacing Modric within the Real midfield will not merely be difficult for Zidane, it will be impossible. When a player of his quality goes down with an injury, the best any manager can do is find the optimum short-term solution so as not to derail an entire season, getting by as best they can until their star returns. 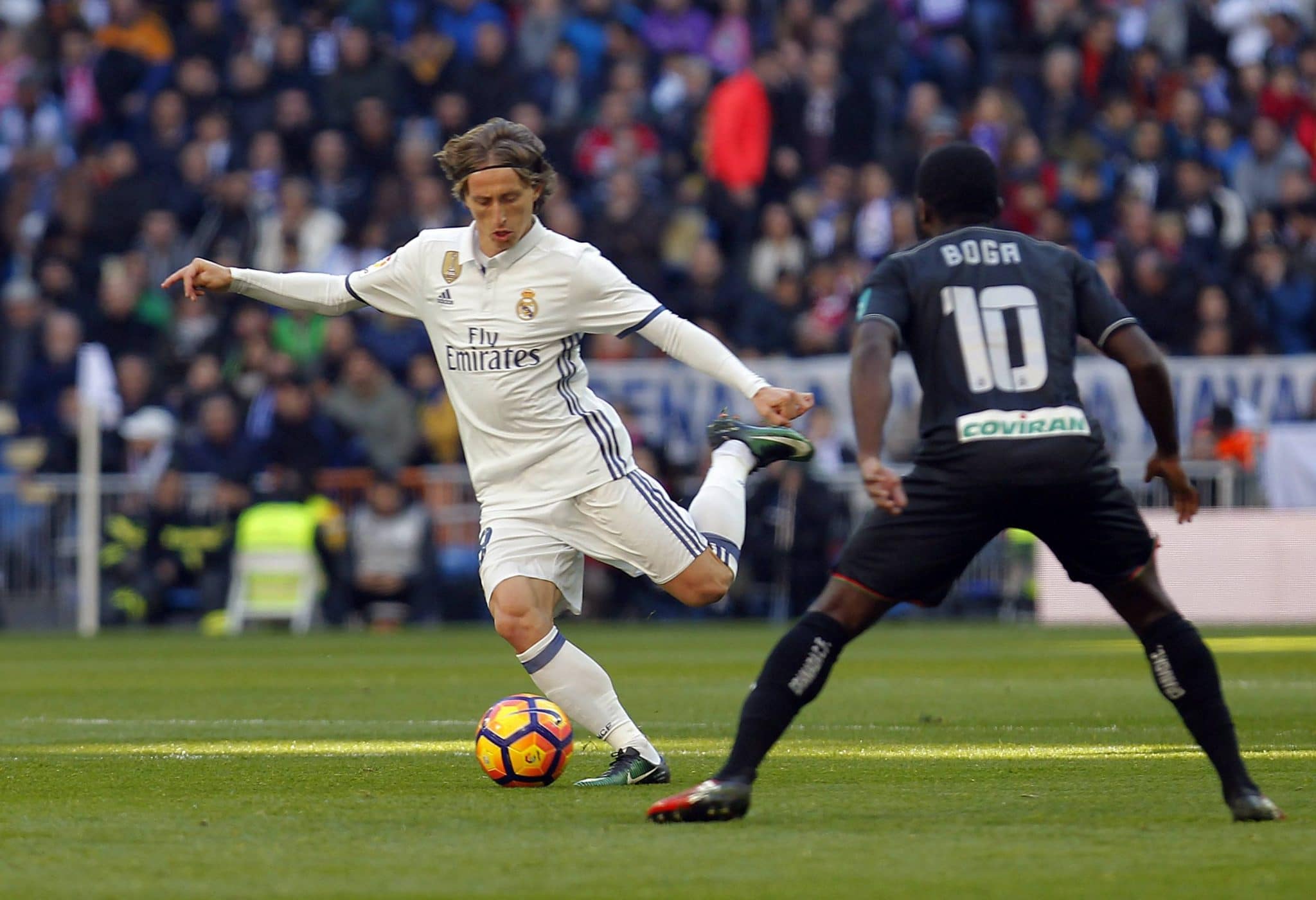 Cristiano Ronaldo’s goals may have won him every major individual award possible, and Bale’s growing influence cannot be understated, but no player has been more vital to Madrid’s recent success than the shy, diminutive midfield magician.

With an average of 55.9 passes per game this season, only midfield cohort Toni Kroos (70.1) and centre-back Sergio Ramos (61.7) see more of the ball than Modric. His 88.8 percent pass completion rate can only be bettered by the same two players within the entire Madrid squad, too.

And of all of Zidane’s charges to have started more than five La Liga matches this term, only Kroos (3.1) averages more key passes per game than Modric (1.6).

While he is out, the French boss will likely decide between Isco and Mateo Kovacic as a stand-in for Modric.

Isco’s introduction would likely have to coincide with Kroos having to sit a little deeper to mitigate against the Spaniard’s preference of operating in high areas. Though undoubtedly the more skilled of the two, the former Malaga player perhaps offers a less balanced option than Kovacic.

The 22-year-old moved to the Bernabeu from Inter Milan in 2015 for €29million, but has largely been a peripheral figure in the Spanish capital. However, this season the international team-mate of Modric has started 11 times in La Liga and is beginning to find a degree of comfort with Zidane’s midfield.

Marked out as a hot prospect from an early age, for a while it seemed that Kovacic would be swallowed up by the expectations and pressure of playing for Real Madrid. But he is clearly beginning to mature and deputising for Modric now could provide a platform for him to further his development. 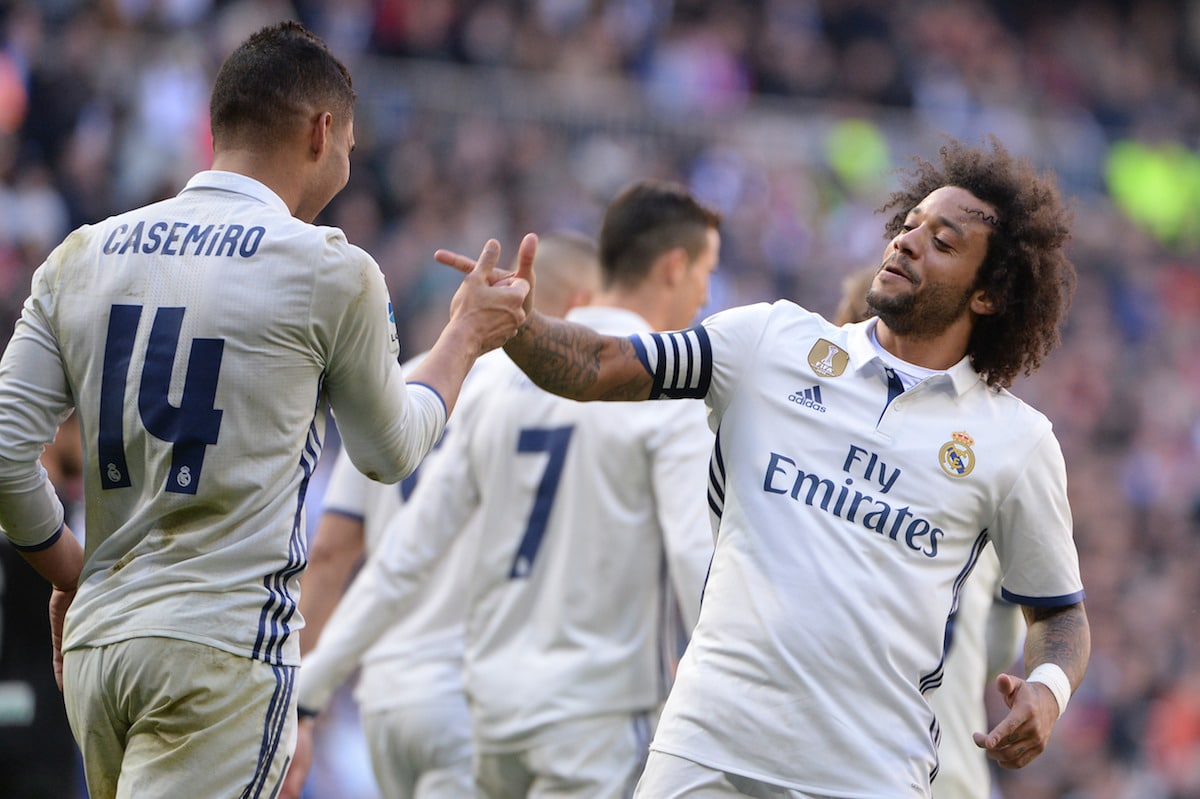 Marcelo’s absence on the left side of defence may provide an even bigger headache for Zidane. Unlike in the case of Modric, the French tactician cannot boast a wealth of adequate alternatives in the full-back positions.

With Marcelo out, Zidane will have to either risk Danilo on the right and move Nacho across to the other side of the backline, or keep the seven-cap Spain international in place and restore forgotten man Fabio Coentrao to left-back.

When Marcelo first moved to Madrid as a teenager a decade ago, he was not always a regular starter as he needed to round out his tactical understanding of the game and grow physically. And when Coentrao joined from Benfica in 2011, the pair would often alternate depending on the strengths and weaknesses of the opposition; the Brazilian was the enigmatic maverick capable of unlocking a resolute defence, Coentrao was the steady hand who would support the attack without over-stretching. 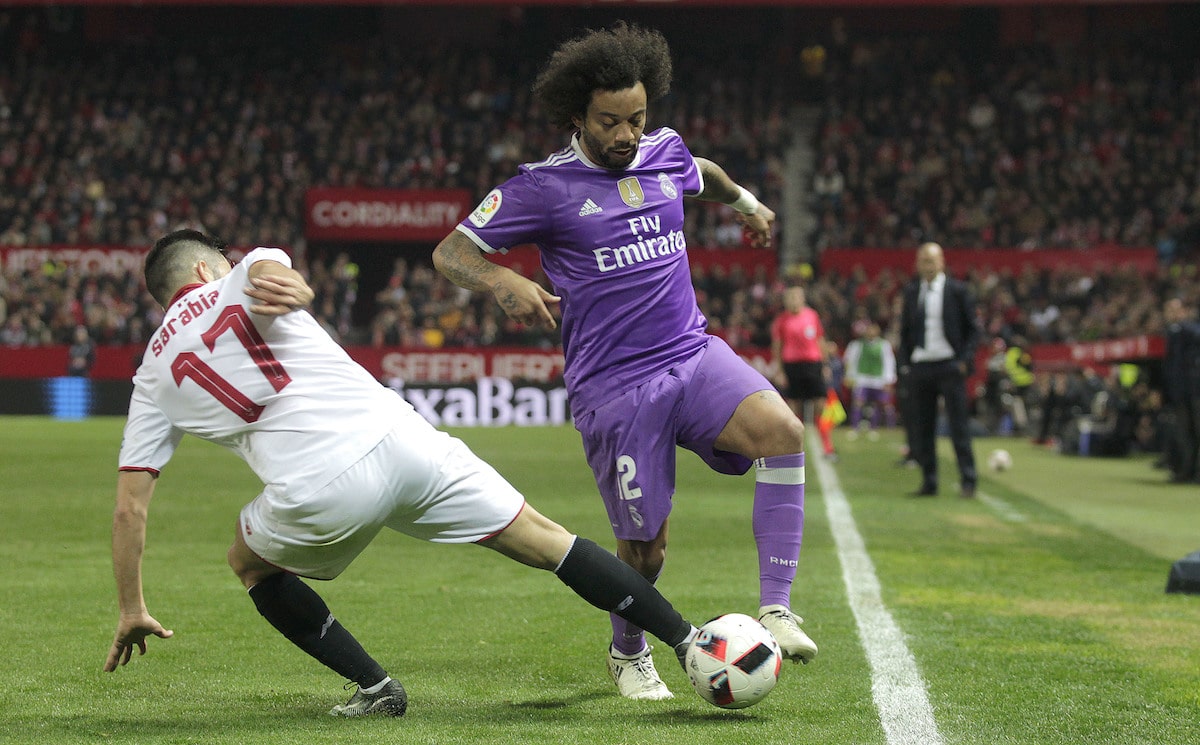 In the 2014 Champions League final against Atletico Madrid, then-Real boss Carlo Ancelotti started Coentrao over Marcelo. The Brazilian would have the last laugh, though, coming on in the 59th minute and terrorising Los Colchoneros with his direct running and lethal crossing, even getting on the scoresheet in extra-time.

Since then Marcelo has been the undisputed first pick at left-back and the 28-year-old is now regarded as one of the very best players in the world in his position.

In Zidane’s favoured 4-3-3, Marcelo is almost solely responsible for providing width as Ronaldo invariably looks to cut inside from his left-wing starting position and look for an opportunity to score. The Brazilian left-back, with his pace, technical ability and athleticism is well-equipped to spend 90 minutes traversing the length of the touchline while remaining a constant offensive threat.

The same cannot be said of any of Zidane’s options to replace him. 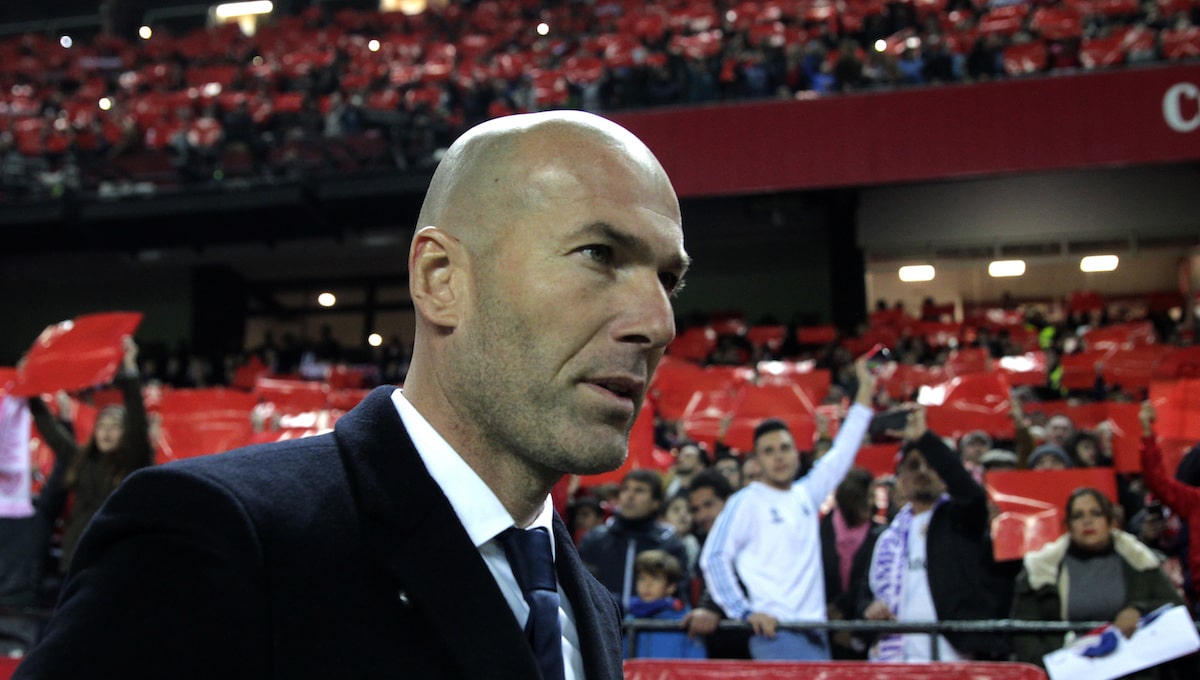 Since taking over from Rafa Benitez in the Bernabeu hot-seat just over a year ago, Zidane has seemed a natural in his first high-level coaching role.

But it is only in adversity that we learn what a manager is truly made of. Madrid still sit top of the table, but Sevilla are just one point behind them, while Barcelona are beginning to find their form.

With the unbeaten streak broken and key players unavailable, we’re about to get a much clearer picture of Zinedine Zidane the manager.

Stay on top of all the latest transfer news by following Transfer Live!