They are not happy numbers.

At 26, he still has a lot of his career still ahead of him, but those three years he spent, mostly injured, at Liverpool were a major disruption.

In the summer, he joined his hometown club Southampton on a four-year deal (although officially Ings is on loan this season, and will be bought next July). After the first three games of the season, the forward is second in the Premier League for expected goals (xG) per 90 minutes (2.4), behind only Mohamed Salah in Football Whispers’ model.

He may have only netted once so far, but the amount and quality of chances he’s getting is a promising sign. 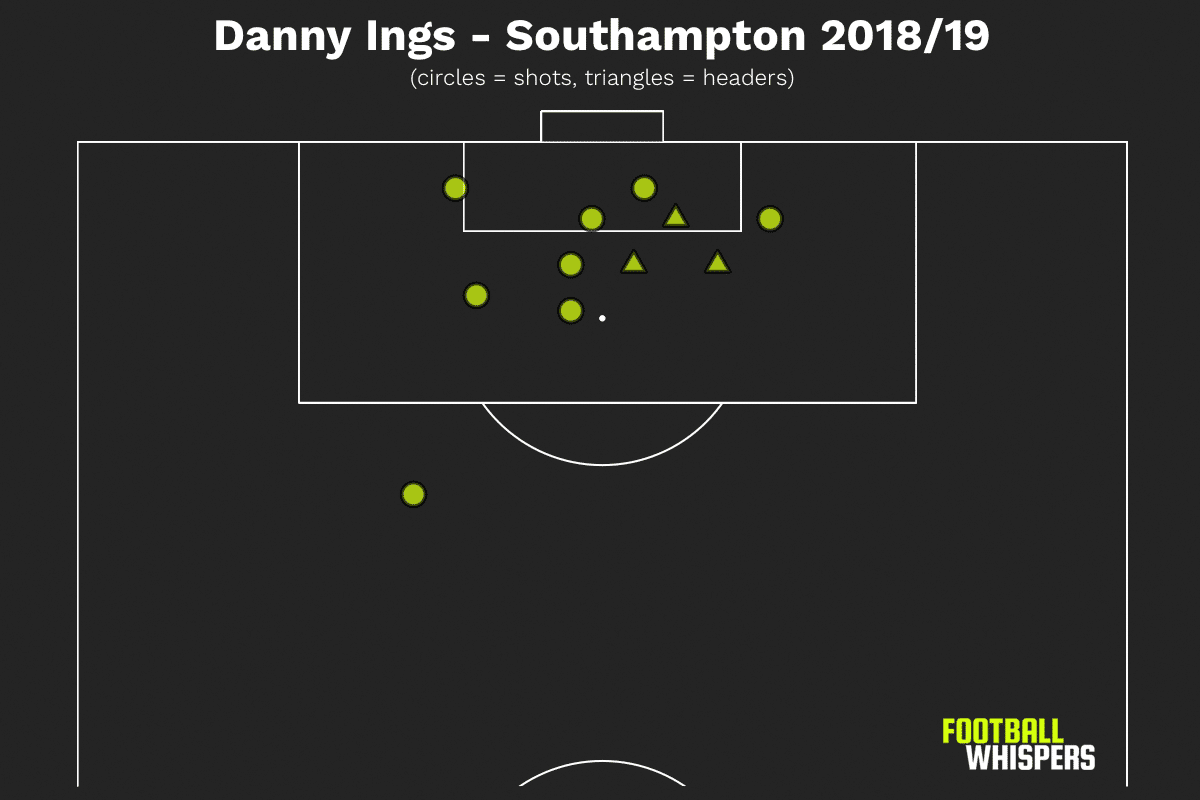 Even moreso considering that Southampton have, at times, looked fairly blunt going forwards.

That’s extraordinary – although possibly not a great sign for Southampton as a team, especially considering that their next two main expected goal contributors are defenders Ryan Bertrand and Jack Stephens.

One step at a time

If Ings keeps it up, or even just manages to keep within touching distance, it will be a happy return to form, a reminder of why Liverpool took him from Burnley in the first place and earned him an England cap once upon a time. Not that the forward is satisfied with just the one.

“I don’t have the cap on show, no, not yet,” Ings said last year. “Because I don’t want to be that guy who just has one cap.

“At the time I was hoping it would be one of many and now I have got that hunger back, I want that to be the case. I want to look back at the end of my career having numerous caps under my belt. That is one of my aims.”

Don’t be rushing to say that Ings could add to it soon; his current club manager Mark Hughes has said that remaining injury-free is the main aim for the year ahead.

“Danny is just looking to have a strong, solid season with plenty of games,” he said ahead of this weekend’s game.

“If he has that kind of season we know he can score goals.

“But we don’t want to place too many targets too soon as he is still coming back from a long time out. We have to be a little patient with him. He has the potential to score goals.

“He is a goal-scorer and a technical player as well who can link the play. That is something we need to be better at, because sometimes our ball retention at the top end of the pitch can be a little bit loose.”

Beyond the fitness worries, the only worries for a striker averaging over five shots per 90 are whether the rest of his team can keep on providing him with opportunities.

In the past few years, since the heady days of top-six campaigns, Southampton have been a team who have struggled to threaten their opposition, consistently looking like they don’t quite know how to piece together attacks once they reach the final third.

A relatively kind opening fixture schedule has helped, but Southampton are sixth in the league for shots taken per game.

It might be too early to say whether the team as a whole have got some of their mojo back, but Ings certainly seems to. Given the awful amount of time he’s spent out of the game, that’s something all fans can be pleased about.