Iñaki Williams is a man in demand.

The Athletic Club forward has been the subject of Liverpool transfer rumours for the past few months.

But it’s not just the Merseyside club who are interested in him.

Most football fans will be aware of Athletic Club’s uniqueness.

Their Basque only policy is remarkable in today’s ever globalising world of football, yet the Bilbao-based club only pick players from the Basque Country.

And for them to have never been relegated and to consistently challenge for Europe speaks volumes.

Their cantera, or academy, has produced the likes of Javi Martínez, Fernando Llorente and Ander Herrera, and it is clearly the pride of the club. 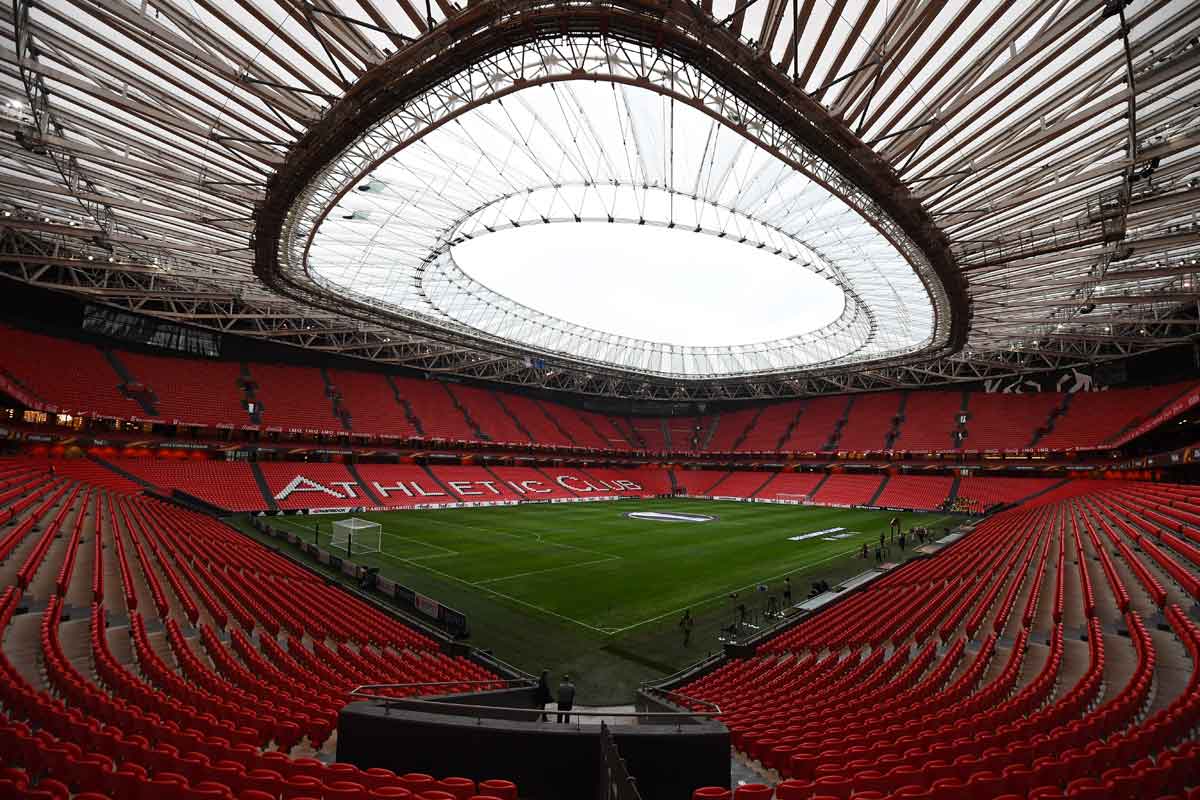 It’s best summed up by the motto ‘con cantera y afición, no hace falta importación’, which loosely translates to ‘with homegrown talent and support, we don’t need any imports’.

And in Williams, they’ve got their latest bright prospect.

He has already made history: having been born to African parents but naturalised in the Basque country, Williams became the first black player to play for Athletic Club in December 2014.

Since his debut, he’s largely played on the right wing, with Aritz Aduriz keeping him out of the team up front.

And he’s gone on to score roughly a goal every five games, with a record of 22 goals in 101 appearances in all competitions for Athletic.

Where could Williams play for Juventus?

Under Max Allegri this season, Juventus have started to move away from the 3-5-2 formation favoured by Antonio Conte that has led the Bianconeri to such success.

The 3-5-2 you associate with Juventus has been used the most, 12 times, while a 4-2-3-1 is the second most favoured formation, being used on nine occasions.

Athletic Club play a a 4-2-3-1, so chasing Williams to play in that formation makes perfect sense.

In La Liga and the Europa League, the 22-year-old has started 22 times this season as the man on the right of the attacking three, while he has made just nine starts as the lone striker.

Although he hasn’t started there this season, he is capable of playing anywhere behind the forward and, but the right wing is definitely his strong point.

And that is because in the 4-2-3-1 at Athletic, he is to some extent a forward playing out wide to assist Aduriz.

He prefers to cut inside and dribble, and his pace and power is crucial.

His final ball is still in need of improvement, but at 22, he’s got his best years ahead of him.

But his footwork would excite Juventus fans should he join

If you want an example of just how good he can be, you just need to watch his goal against Espanyol, the flick, swivel and volley was perfection.

It was part of a much more prolific season – last campaign, he scored 13 compared to the six so far this time out – but it just shows you what he’s capable of if you harness his potential in the right way.

How does Williams compare to Juventus’ options?

If you are comparing Williams to Juan Cuadrado, the current option for the right wing position in a 4-2-3-1, it’s the Colombian who comes out on top. 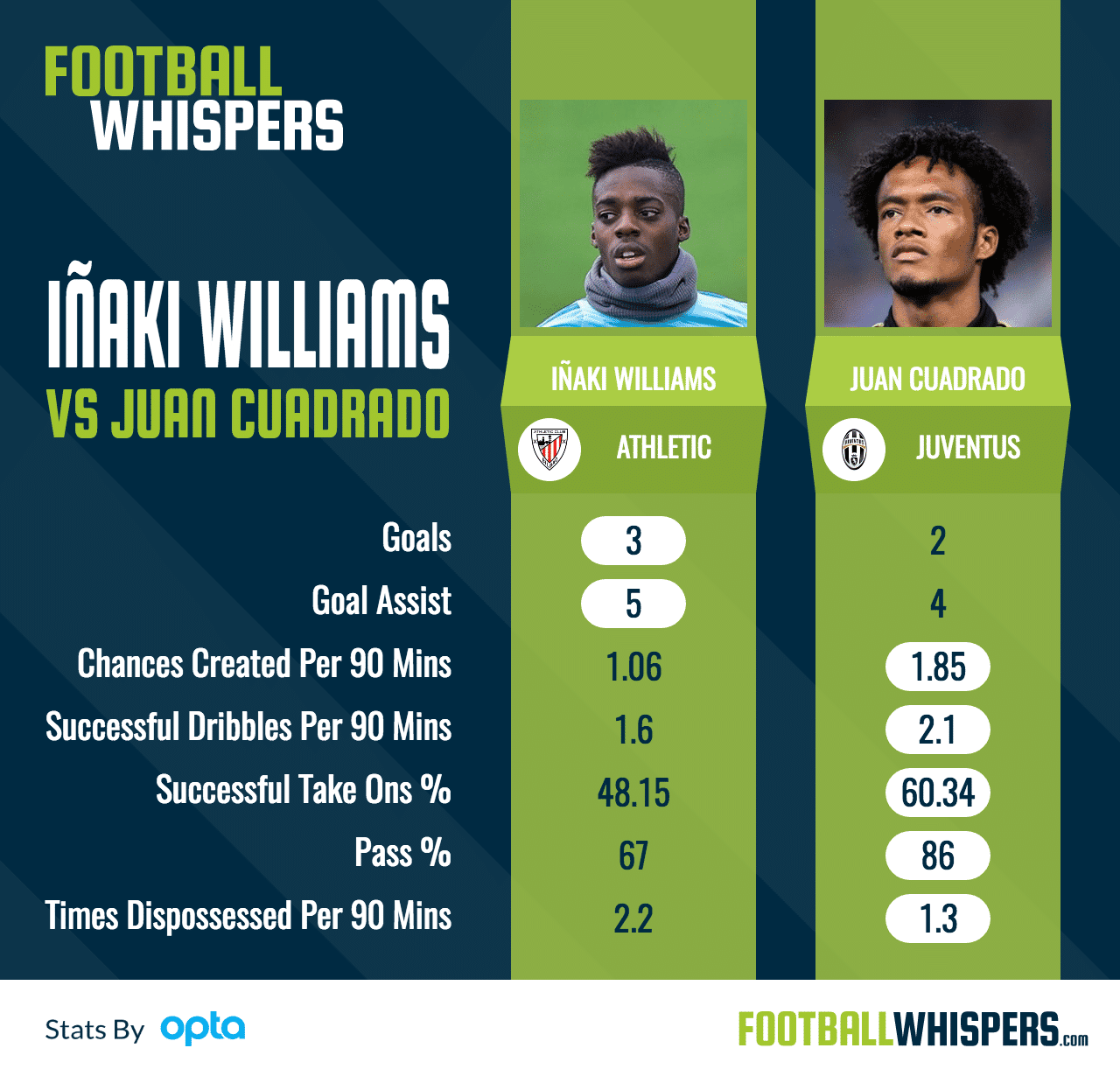 Williams may have more league goals and assists than the Juventus man this season, but Cuadrado comes out on top in a number of other statistical battles.

He is also dispossessed fewer times per 90 minutes than the Spaniard – 1.3 rather than 2.2.

If you compare him to the current options for the forward’s role at Juventus, he also doesn’t come out too favourably either. 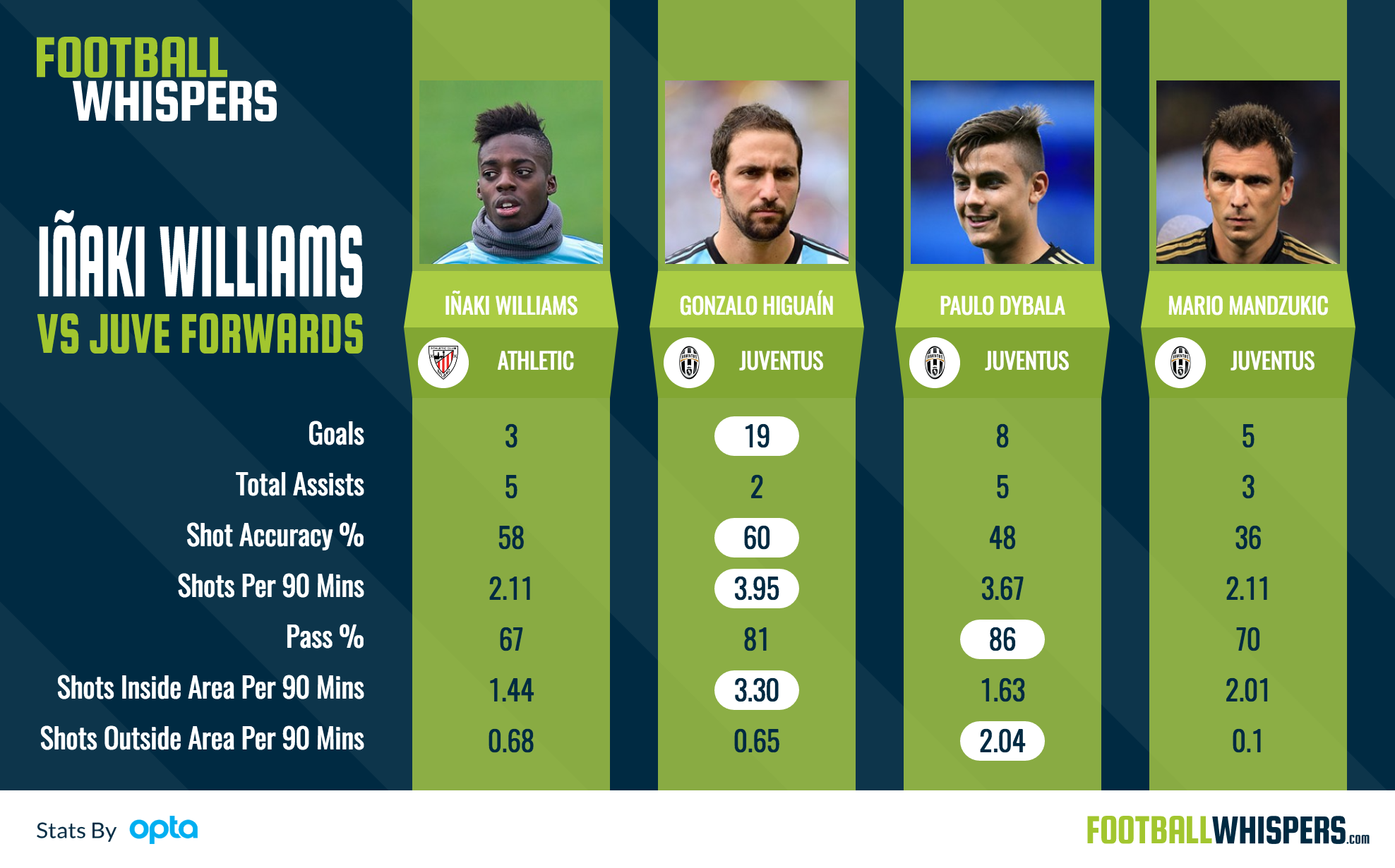 Williams has been directly involved in eight goals this season, level with Mario Mandzukić, but way behind Gonzalo Higuaín (21) and Paulo Dybala (13).

His pass accuracy is also the lowest of the quartet.

The Spaniard takes the joint-fewest shots per 90 minutes (2.11) along with Mandzukić, but so far this season they have been much more likely to hit the target than the Croatian’s efforts.

While Mandzukić has a shot accuracy of just 36 per cent this season, Williams has one of 58 per cent, also above Dybala (48 per cent).

When you are comparing the league statistics of the four, you do have to take into account that at Athletic Club, Williams plays wide, which is not necessarily his natural position, whereas Higuaín, Dybala and Mandzukić tend to play more centrally.

This season may not have been as impressive as the last for Williams, but he definitely has something about him.

If the Juventus hierarchy do decide to get their chequebook out and bring him to Turin, it would be unfair to expect the world from him at 22.

But the Spanish under-21 international has got sack loads of potential and could well turn into a very good player indeed.