Derbies, especially the biggest ones, bring out the best and worst in every group involved in them. Fans will engage in the kind of narrow-minded parochialism that won Donald Trump the US Presidential election, while pundits and commentators will discuss lazy buzz words like “passion” and “atmosphere” rather than make any genuine attempt to analyse the importance of a given fixture.

Of course, local bragging rights do matter. If you work every day in a large group of people divided between the two clubs in question, you want your side to emerge victorious so you can be the one handing out the verbal jabs rather than being forced to take them for a week or two. You want to be able to proudly wear your colours in the days after a prestigious win and relish the victory over your neighbours, family members and colleagues.

Few such encounters are as keenly felt as the one in Italy’s capital city. The Rome derby is certainly the most fervently contested, both on the pitch and in the stands. While the glamour and prestige of the Milan derby is often taken as being a symbol of everything calcio represents, the meetings between Inter and AC Milan have far less tangible meaning than whenever AS Roma and SS Lazio go head-to-head.

Some of that is perhaps explained by the relative lack of success enjoyed by the latter pair; where the San Siro rivals have often been able to forget a loss to their crosstown foes by lifting the scudetto or even the Champions League trophy, victory in the Derby della Capitale is often the highlight of a given season for its two protagonists. 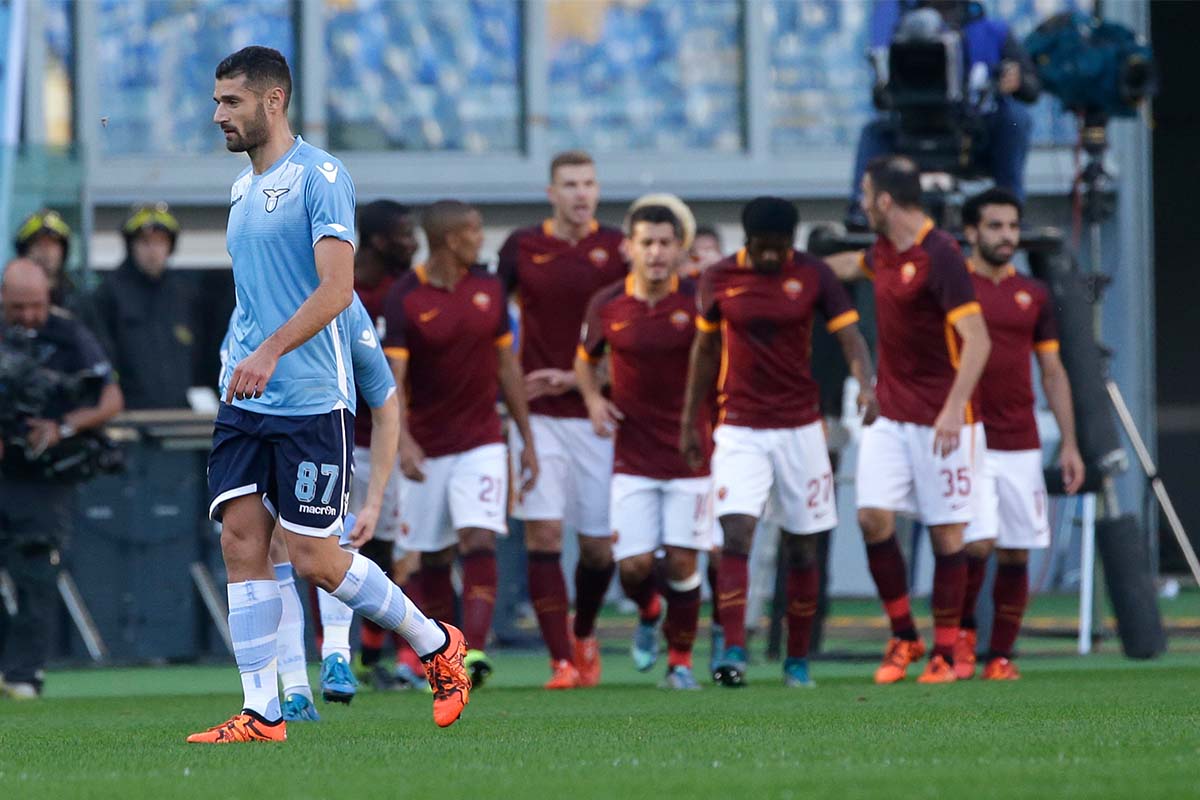 It is a fixture that has historically been marked by huge crowds and mindless violence, and it seems unable to pass without incident; a mixture of sporting, historical and political tensions combining to truly make it one of football’s most intense rivalries.

Between them they share just five league titles, but their regular meetings have become the stuff of legend. The list of incidents is seemingly endless, beginning in 1927 when Benito Mussolini forced three clubs to merge and become Roma, with Il Duce hoping to see the unified team challenge the dominance of Italy’s northern clubs from Milan and Turin.

Only Lazio resisted, with their penchant for using swastikas and fascist symbols to mock Roma turning the battle for local pride into something far more vitriolic. Lazio supporter Vincenzo Paparelli was hit in the eye and killed by a flare fired from the opposite end of the stadium in 1979, while reports of another death halted a subsequent clash in March 2004.

During the second half of that fixture, flares were thrown onto the pitch as a riot broke out in the stands, the violence fuelled by rumours that a young boy had been killed by a police car just outside the stadium. The smoke brought play to what was thought to be a temporary halt, but, despite numerous announcements from the public-address system pointing out that no one had died, the sceptical fans continued their rampage.

A number of Roma ultras climbed the barrier at the front of the stand and made their way onto the edge of the pitch to talk to captain Francesco Totti. One put his arm around the player’s shoulders in a manner that seemed both patronising and menacing in equal measure, prompting the skipper to return to the halfway line. He was then heard telling his coach Fabio Capello that, “If we play on now, they’ll kill us!” The match was called off after a brief discussion with league officials.

Almost a decade later, the 2013 Coppa Italia final gave the derby what remains arguably its most high-profile edition, with Lazio emerging victorious thanks to a goal from Senad Lulić. Few moments of real incident have occurred since, but such passionate matches always bring up talk of a “divided city” and, in this instance, the issue of separating supporters has actually become the biggest talking point.

As is traditional in Italy, Roma and Lazio obviously fans occupy opposite ends of the Stadio Olimpico and are not allowed to mix, but last season the city council installed plexiglass barriers to divide the curva behind each goal. That partitioned the true supporters of each club into smaller sections, with fans irate at the effect it had on their ability choreograph banners, sing or wave flags, sparking a major protest and actually uniting supporters of the two clubs.

While the local government insisted it made the area safer and easier to manage, it restricted viewing and damaged the atmosphere of the ground, with statements insisting the fans were “fighting for the soul of the Olimpico!” They boycotted matches but to no avail, a decision which drew no sympathy from Carlo Tavecchio, the head of the Italian FA.

“If the fans want to go to the stadium, they will go,” he said. “They don't worry about whether there is a barrier there or not, the important thing is that we are reducing the acts of violence which had become intolerable. We've recorded a significant reduction in injuries relating to games, and I hope this trend will be maintained.”

Yet just 29,922 people attended the last derby in March, leaving a stadium which holds over 70,000 eerily empty for such a big occasion. Giovanni Malago, head of the Italian Olympic Committee, admitted it was “not a good advertisement” for Rome's image to have so many empty seats for the showpiece event. It seems Lazio fans will soften their stance this time, reportedly set to attend the game and already believed to have sold out their ticket allocation.

Giallorossi supporters seem more resolute however, meaning — in the stands at least — this could be something of a one-sided affair. “It doesn't take a genius to say a derby is unlike any other game,” new Roma chief executive Umberto Gandini said this week. “It's another step along the road but it has great importance in terms of the city bragging rights, which mean a lot to us.”

With Roma sitting second and just four points behind leaders Juventus, with their rivals a further two places and one point behind them, it’s all on the line once again, regardless of whether the barriers that divide the curva prevent a full house and thousands of seats remain empty in protest.