Arsenal lost their first two games of their season, yet they haven’t been beaten since. And if they avoid defeat to Manchester United, Huddersfield Town, Qarabag, and Southampton in a quickfire run of matches, they’ll have reached the four-month mark.

Football statistics sometimes get a bad wrap for telling fans the team that they love actually aren’t that good. Arsenal’s unbeaten run was no exception. Numbers made for average reading, although most Gunners fans seemed to accept that their performances didn’t quite match up to their results.

Even Unai Emery admitted, before the North London derby, that Tottenham Hotspur had an edge over his team.

“At this moment, Tottenham are better than us in the table and better than us also last year,” he said. But then came the match, the performance, the result.

And suddenly Arsenal are fourth in the Premier League and look like they genuinely belong among the best sides in the top flight.

The numbers are improving

Some might have been content with an 11-match winning streak but Emery knew that his team couldn’t stand still.

“Maybe it’s one process but we need to be very demanding of ourselves to improve,” he said in October. “And also when we are winning, we need to look at where we can improve tactically to progress individually and collectively.

“It’s important that we don’t stop and that we continue to work every day and keep up our concentration for each match, to do that with high intensity.”

Early on in the campaign Arsenal were riding their luck. But they’re starting to deserve their wins.

Below is an image of the difference between their expected goals for and against after each Premier League match. After a poor start, where they were among the midtable sides, the Gunners are rising towards the top bunch. 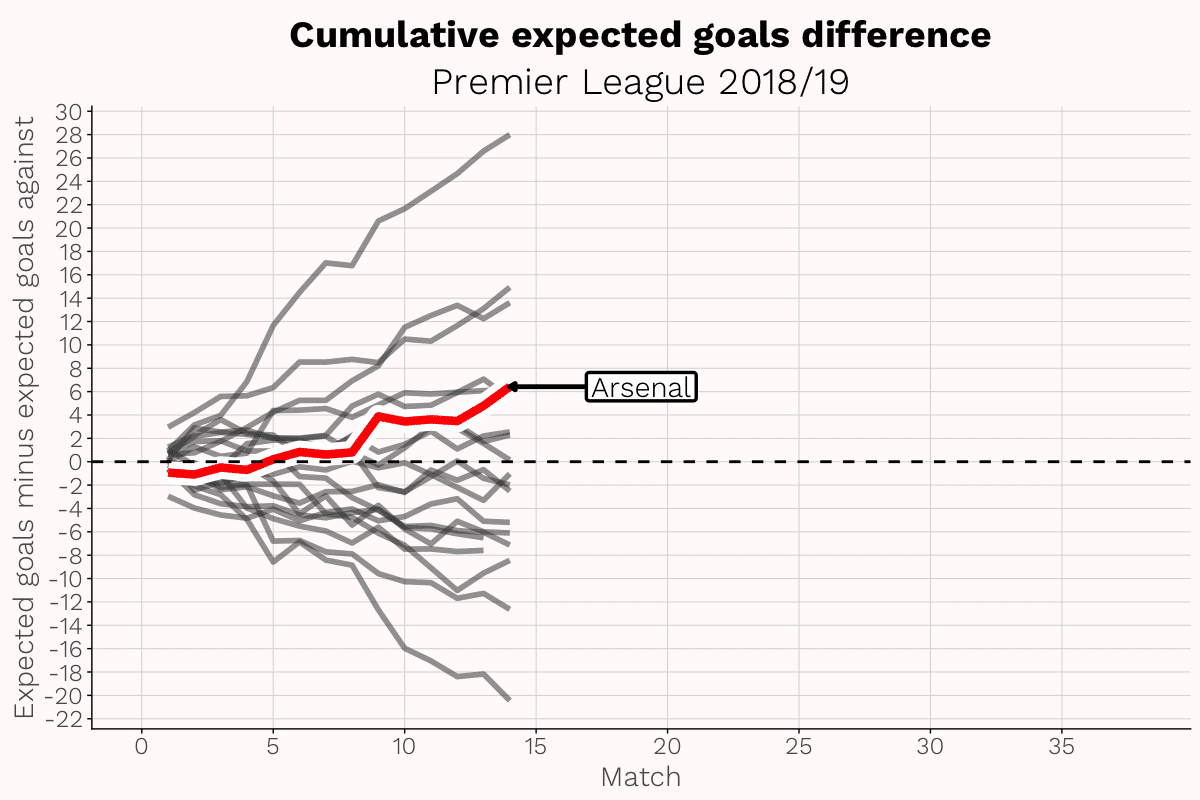 The true improvement is actually quite recent. The first big spike in the chart comes from one game, a 3-1 win against Leicester City.

Under the hood: defence and attack getting better

It’s not just their expected goals where this improvement is coming. Arsenal have also seen a marked improvement in keeping their opponents out of the final third.

Barely a third of Tottenham's possession sequences reached that area of the pitch. 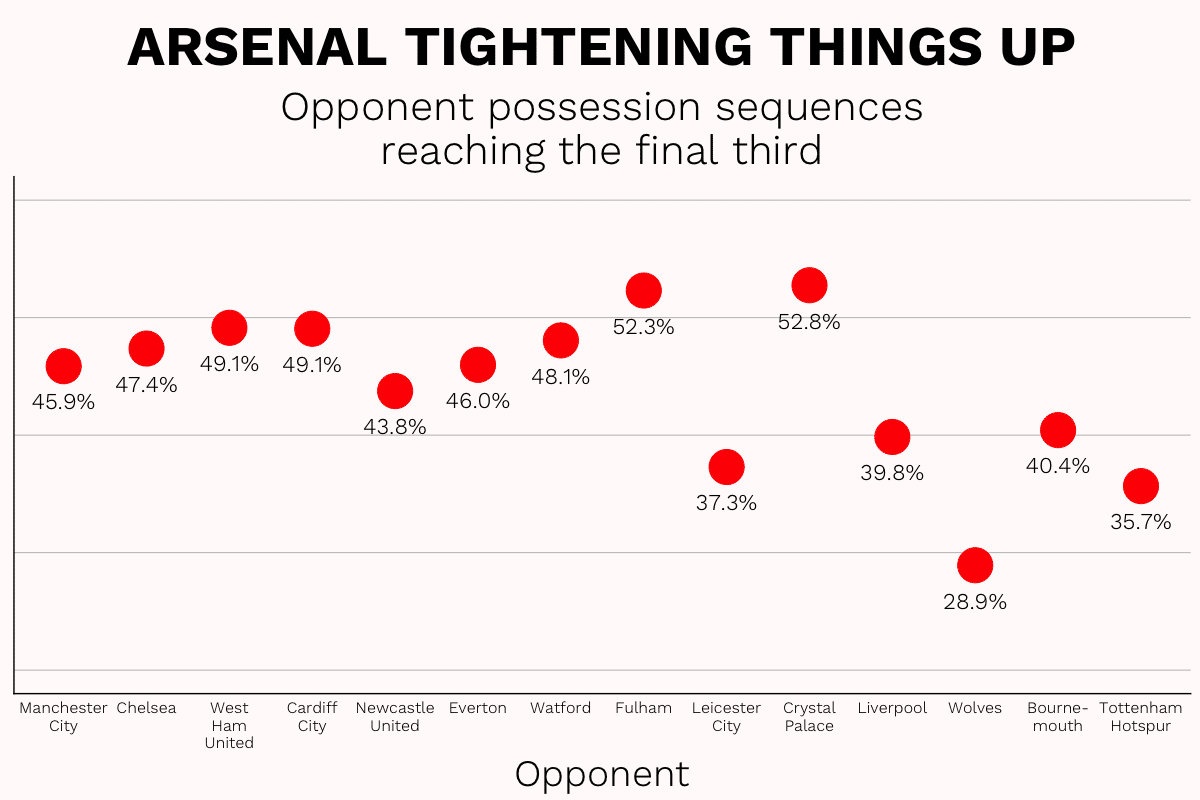 They aren’t always limiting shots when teams get into the final third, betraying the fact they can still be quite open on the break, but it’s a visible improvement.

Emery has referenced this process himself in the October interview. “At the moment,” he said, “we are conceding a lot more than we want to but in the last matches, we are learning to control games better, little by little.” The work is paying off.

It’s also impressive that the side’s attack has kept firing on all cylinders in the recent run.

Their winning run actually saw them hit below the average expected goals value that teams reach per match, although this may have been affected by managing games from leading positions.

The recent 2-2 draw against Crystal Palace was cause for concern. They had just seven shots in the match, two of which were direct free-kicks, and mustered just 0.74 expected goals, according to Football Whispers’ model.

That was their lowest single-match total since the very start of the season, where Manchester City limited them to 0.56 expected goals.

However, in the past month, though, they’ve been consistently good against strong opposition. 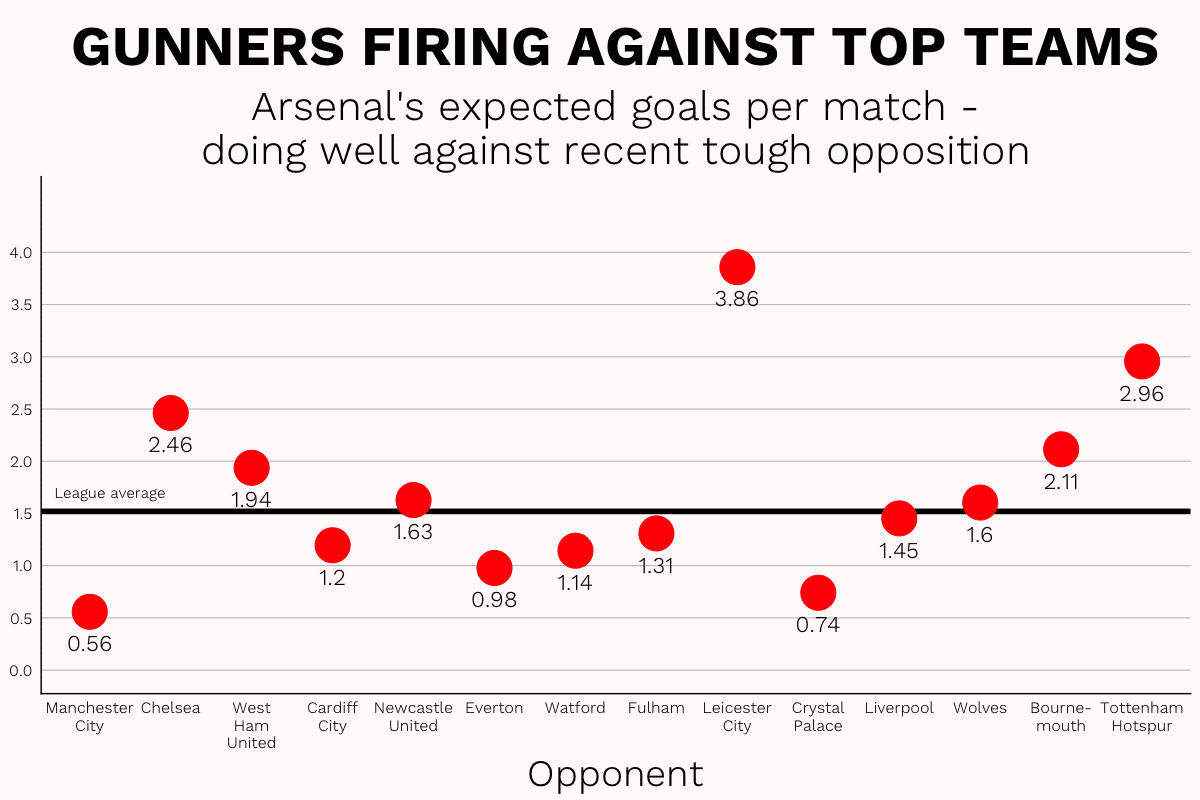 Arsenal spent a couple of months bleeding out an extraordinary amount of points from unspectacular performances. Now, though, how they’re playing matches their league position.

The Gunners are back. And they belong to be there.