Although the fee was questioned – £35million for a player days away from his 29th birthday – few doubted the reasoning behind Manchester United signing Nemanja Matić from Chelsea in July 2017.

José Mourinho was getting a player he knew well, having signed the Serbian at Stamford Bridge and won a Premier League title with him in 2015, and United were acquiring an experienced, disciplined midfielder who would help release Paul Pogba.

However, now into his second season at Old Trafford, it is becoming increasingly apparent that Matić is creating more problems for United than his arrival has solved.

One of the main reasons United's signing of the Serbian international was hailed at the time was the fact, while the Red Devils were looking to build towards a title challenge of their own, he had just been a regular fixture in a Premier League-winning Chelsea team for the second time.

United needed a top-class defensive midfielder and they'd got one. But, on closer inspection, it became apparent the 20-time champions were not getting the Matić Mourinho knew.

During the Blues' 2014/15 title win, masterminded by Mourinho, Matić had been the primary protective midfielder, ordinarily stationed alongside the attack-minded Cesc Fàbregas at the base of midfield in a 4-2-3-1 formation. 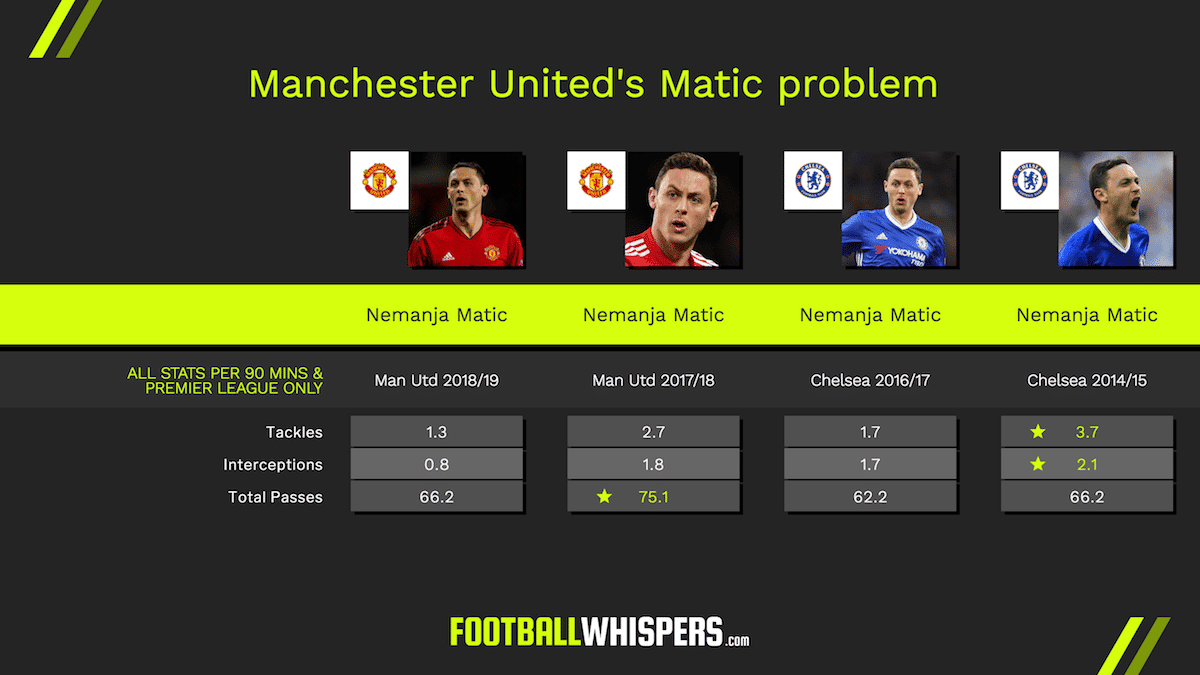 From there, Matić's precise passing was an asset, seeing him average 66.2 passes per 90 minutes, while he ably screened the back four with 3.7 tackles and 2.1 interceptions per 90.

However, by Chelsea's next Premier League triumph, under Antonio Conte in 2016/17, Matić's role had altered greatly. He was now partnered in central midfield in the Blues' 3-4-3 by N'Golo Kanté, arguably the best ball-winning midfielder in the world.

Kanté was now the one tasked with protecting the defence, sitting deep and breaking up play, and Matić's tackles and interceptions averages dropped to 1.7 apiece.

He also had less responsibility with the ball, now making 62.2 passes per 90, as centre-back David Luiz became Chelsea's main playmaker from deep. And the presence of the ultra-dynamic Kanté masked how Matić's mobility had regressed over the past two seasons, with the former Benfica man less relied upon defensively, aiding a career-high assists return of seven.

Matić made a positive start to life at Old Trafford, performing well and impressing with his trustworthy, crisp use of the ball. It wasn't long before cracks started to form, though, and it became increasingly noticeable how he was not the guarding presence in front of the United backline he was advertised as being.

Expected goals (xG) measures the frequency and quality of scoring chances created or conceded by a team (or player) by using historical shot data to assess the likelihood of each shot being scored. Despite only conceding 28 league goals last term, United's total xG conceded was 44. By this measure, they ranked only sixth among Premier League teams.

Part of the issue with United shipping high-quality chances is that they have a weakness at centre-half, which Mourinho attempted to address during the most recent summer transfer window, only for his preferred targets to be vetoed by the club's board.

But the frequency with which opposition midfielders and attackers are able to run off Matić and saunter unchallenged into the box – see İlkay Gündoğan's goal in the 3-1 derby defeat at the Etihad as a prime example – is another major contributing factor.

Restored last season to a remit not dissimilar to the one in which he performed so well at Chelsea under Mourinho in 2014/15, Matić was unable to match his defensive productivity of that campaign, averaging just 2.7 tackles and 1.8 interceptions per 90.

This season, those averages have plummeted yet further, down to just 1.3 tackles and 0.8 interceptions.

United are also beginning to find that Matić's passing, while reliable enough in terms of accuracy at 88.2 per cent, is often ponderous and cautious; fans inside Old Trafford yearn for a quickening of the pace that, with Matić in the middle, isn't forthcoming.

Despite his struggles, Matić remains a near ever-present in the United starting XI in both the Premier League and Champions League. While top-class alternatives aren't abundant, Mourinho does have Ander Herrera, Andreas Pereira and £52million summer signing Fred who could all fulfil the deepest midfield role; a rest might help Matić come back stronger.

In the early weeks of last season, Chelsea struggled to recapture their title-winning form and new signing Tiémoué Bakayoko looked all at sea in Matić's old role; it seemed as though United had pulled off a transfer-market masterstroke, strengthening their ranks while simultaneously weakening a rival.

A year on, however, Chelsea have recognised their error in signing Bakayoko. The Frenchman has been shipped off on loan to AC Milan, replaced by former Napoli playmaker Jorginho, who has revolutionised the Blues' playing style. Meanwhile, Matić, slowing weekly, remains a fixture at Old Trafford.

Mourinho recognises the need to upgrade his defensive options and will reportedly look to bring in a new centre-back during the January transfer window. A replacement for Matić, though, might be a wiser move.