What makes  continues to star, José Mourinho has Zlatan Ibrahimović to return in January.

The Swedish forward, 36, top scored for United last term, bagging 28 goals in all competitions before knee ligament damage ended his season against Anderlecht in April.

Ibrahimović, whose contract expired at the end of June, underwent his rehabilitation at United's training complex at Carrington and, in late August, inked a contract for the 2017/18 season.

There is little chance of the former Paris Saint-Germain forward returning before the new year. But with £75million signing Lukaku having scored seven in his first seven outings for the Red Devils there is no rush to get the Swedish icon back.

But when Ibrahimović does return Mourinho will face the proverbial ‘nice headache to have' when it comes to working out a way to utilise all his attacking talent.

After all, the Portuguese still has Anthony Martial and Marcus Rashford – both of whom have made impressive starts to the season – available to him as well.

So how does Ibrahimović compare? 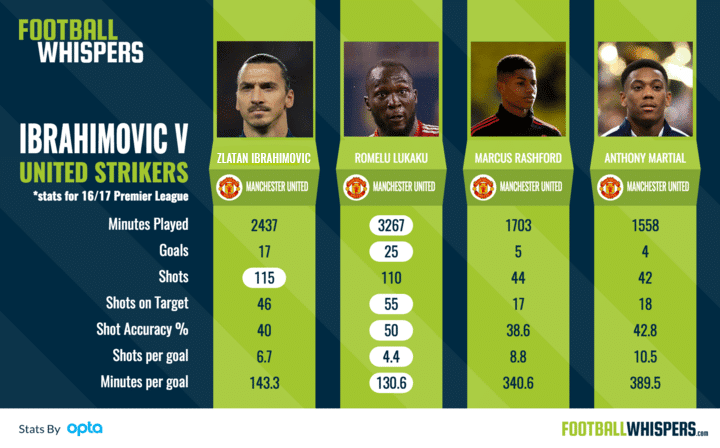 The former Everton thanks to a season-ending injury suffered in April.

While he was every inch the leader of United's forward line, Ibrahimović perhaps took that responsibility a little too seriously. Despite playing 830 minutes fewer than Lukaku, he managed more shots over the course of the season.

And therein lies the big flaw with Ibra. While he guarantees goals, he also guarantees misses and his rate of 6.7 shots per goal is worse than Lukaku (4.4) by some distance.

Ibrahimović also squandered more ‘big chances' (18) than any other top-flight player last season. It is also worth noting the impact Ibrahimović had on Manchester United's play.

With the Swede in the side Mourinho's men were predictable and lacked movement up front. Without him, Rashford led the line in United's 2-0 win over Chelsea at Easter and showed more dimensions to his game.

Rashford and Martial's numbers, for what they're worth, hardly bother the big two of Lukaku and Ibrahimović. But that's because the duo were largely relegated to shifts on the left wing – something else Mourinho would have to take into account if he re-signed Ibrahimović.