Mention the name Iago Aspas to a certain type of English football fan and an inevitable response will follow. “Yeah, remember that corner against Chelsea…”

That is the Spaniard's Liverpool legacy. The one moment etched into the minds of the Premier League supporter. Aspas arrived from Celta in the summer of 2013, did very little and departed, chewed up and spat out by the self-proclaimed greatest league in the world.

The versatile forward left Anfield in 2015 and returned home to Celta. He has since become a talisman for the club during the last four seasons. When Aspas performs, the Galician side perform. When he's doesn't or suffers injury, well you end up with the club's 2018/19 campaign.

With just eight matches of the La Liga season remaining, Celta sit in the relegation zone, four points adrift of Villarreal in 17th. They have lost nine of their last eleven matches, of which Aspas has played just 24 minutes due to a recurring calf injury suffered just before Christmas.

“He is more important for us than Messi is for Barcelona,” Celta's attacking midfielder Brais Méndez claimed in February.

It's a bold statement, outlandish some may even feel. Yet the simple fact is that when Aspas suffered his injury in December, Celta were ninth in the table and had taken 21 points from 18 matches. Without him, they've been in freefall.

“We have good players to get us out of there (the relegation zone) without having to rely on Iago as much,” the club's third head coach of the season, Fran Escribá, said prior to the international break. ” They have to contribute more, the individual performance of some players is not what we expected.”

Despite his three-month absence – barring a 24-minute substitute appearance against Getafe which arguably did more harm than good – Aspas remains Celta's top scorer with ten goals. Yet his overall contribution, his impact on the side, is far more important. 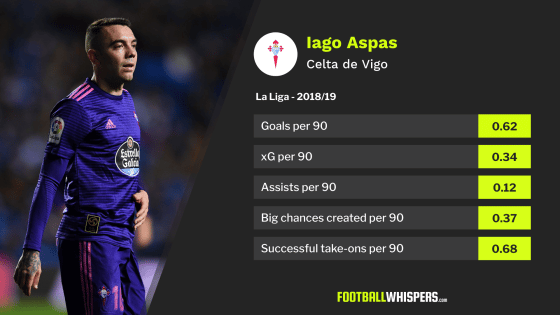 Aspas is not only Celta's goalscorer; he's their creator and first line of defence. He is their leader, something which can't be measured in pure numbers. The 31-year-old drags his side forward through sheer force of will much like Steven Gerrard, a former teammate of his at Liverpool, did on a weekly basis.

Which brings us to this weekend. Aspas has used the international break as a mini pre-season. An opportunity to finally overcome the calf problem that has plagued him throughout 2019. He is ready. Ready to play. Ready to save Celta.

And, by a fortunate stroke of serendipity, the Celestes take on Villarreal, the team directly above them in the La Liga table. The stage is set for Aspas.

“He is a key player, the best we have,” defender David Costas has said this week. “He has a lot of personality and can take this pressure and more.”

Escribá has been a little more cautious. The Celta head coach is wary of the expectation placed upon Aspas' shoulders given he will not be 100 per cent fit. He did, though, admit: “He will not be at his best… but he will undoubtedly make us all better.”

He's only played once this year, and they're four points from safety! ? pic.twitter.com/RxMPidXjBW

With Aspas in the side, Celta have averaged 1.5 goals per game. Without him, that figure drops to 0.8. Given only fellow relegation battler Rayo Vallecano have conceded more goals in La Liga this season than Celta (47), the Spain international's impact in the final third may prove vital.

On his Celta debut, way back in 2009, a goal from Aspas saved Celta from relegation to the third tier of Spanish football and possible extension. This time the stakes aren't so high, but the club need him to perform another rescue act.

And if he pulls it off, then perhaps that short corner will be forgotten once and for all.