Tottenham Hotspur have had mixed success with the transfer market in the last three years. They have strengthened with proven Premier League players like Victor Wanyama and Toby Alderweireld while some recruits, like Lucas Moura, Clinton N'Jie and Vincent Janssen, haven't quite panned out as hoped.

One of Spurs' shrewdest acquisitions under Mauricio Pochettino, however, has been Son Heung-min. Signed from Bayer Leverkusen in the summer of 2015 after two highly impressive campaigns with the Bundesliga side, Son has proven to be a valuable member of Pochettino's first team.

Now, if recent reports are to be believed, Son may soon be joined in north London by his South Korean compatriot Hwang Hee-chan.

According to the Austrian media, the RB Salzburg forward is being considered as a potential back-up for Harry Kane should Fernando Llorente leave Spurs in the summer. The report appears to have some truth in it as the Evening Standard explains that Hwang has forged a friendship with Son over their time together in the South Korea set-up.

The player has apparently expressed an interest in following Son's footsteps to the Premier League and, with that, we have decided to take a closer look at the Salzburg star to determine how strong an option he could be for Pochettino's men.

Hwang has played a starring role in Salzburg's run to the Europa League semi-final, with five goals in the competition including a strike against Lazio in the quarters.

He has also scored four times in the Austrian Bundesliga, with Salzburg closing in on their fifth successive title.

Although not prolific this term, the 22-year-old did find the net 16 times in the previous campaign, so he certainly has goalscoring prowess in his locker. 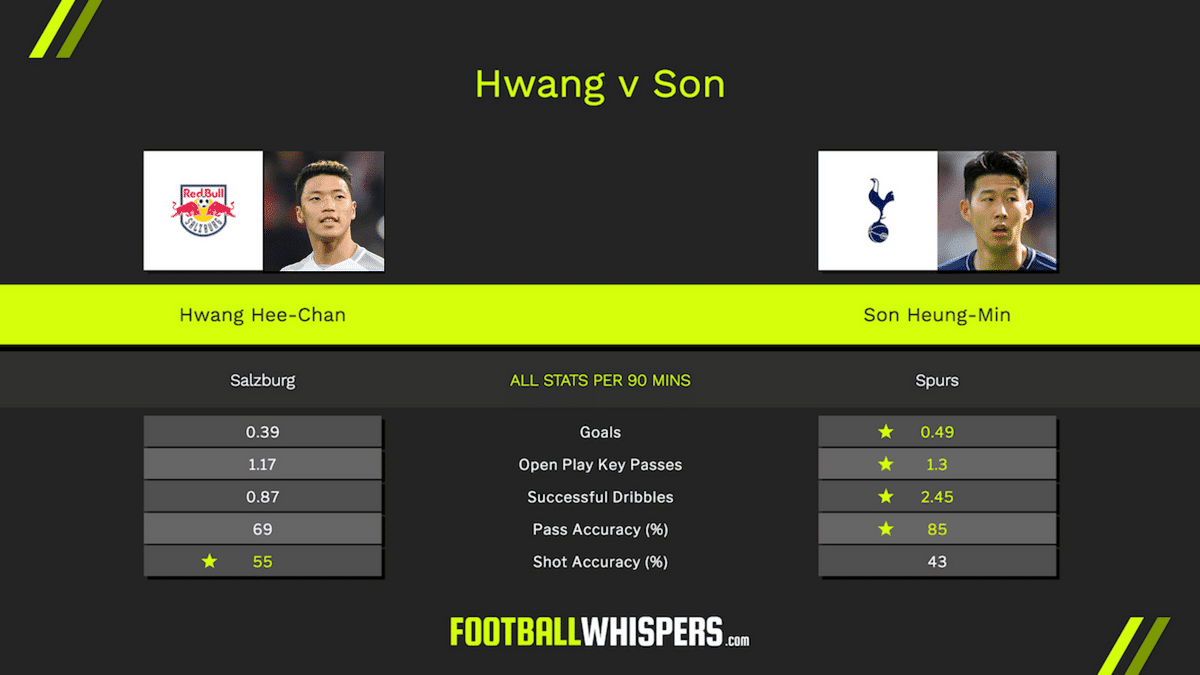 Primarily a forward, Hwang would play second fiddle to Kane at Spurs but that the club have tracked him for a long time suggests they see enough potential in the youngster.

A nimble-footed attacker, Hwang is comfortable receiving the ball at his feet in tight spaces as he has a quick change of direction which allows him to elude defenders. Hwang is also known for a willingness to run beyond defenders, so he would offer a more dynamic presence up top to, say, Llorente, and the Korean's abilities are arguably better suited to Spurs' fluid attacking style.

Llorente, at 6ft 4in and well into his thirties, is at odds with the youthful swagger and exuberance of Spurs' frontline. Having impressed at Swansea City with 15 goals in 35 games, there was logic to signing Llorente as an alternative to Kane but, like Janssen and Roberto Soldado before him, the former Juventus striker hasn't quite gelled as seamlessly as Pochettino would have hoped.

With Llorente's exit a strong possibility, it seems as though Spurs are targeting a different type of player with which to replace the 33-year-old.

Hwang would offer a refreshing and somewhat radical departure from Llorente, a player who is more likely to make runs off the defender's shoulder and offer blistering pace on the break, two attributes that make him an attractive candidate for Pochettino.

Take his goal against Rapid Wien. The move starts deep in Salzburg's half and, as soon as the ball crosses the halfway line, Hwang surges forward.

You can see him in the bottom right of screenshot below. 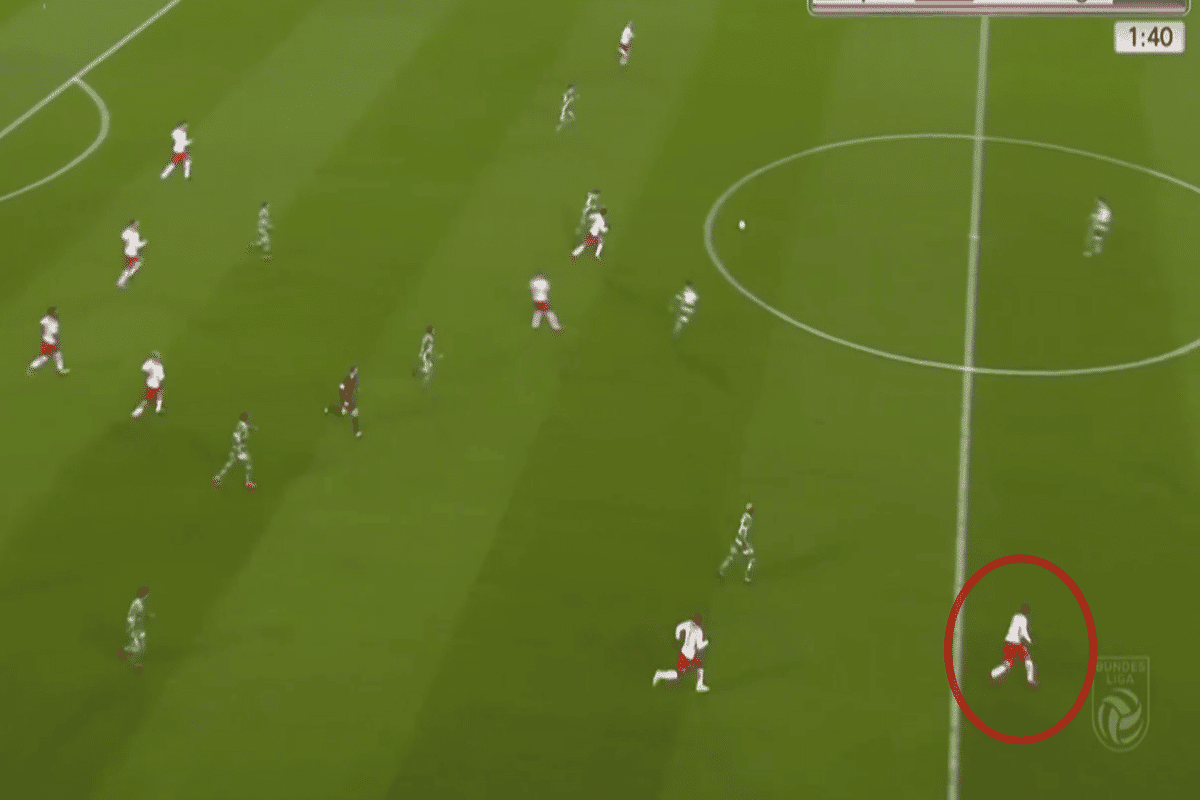 Hwang is clever with his movement. Darting into the middle between the two centre-halves, he opens up space for Reinhold Yabo to exploit. 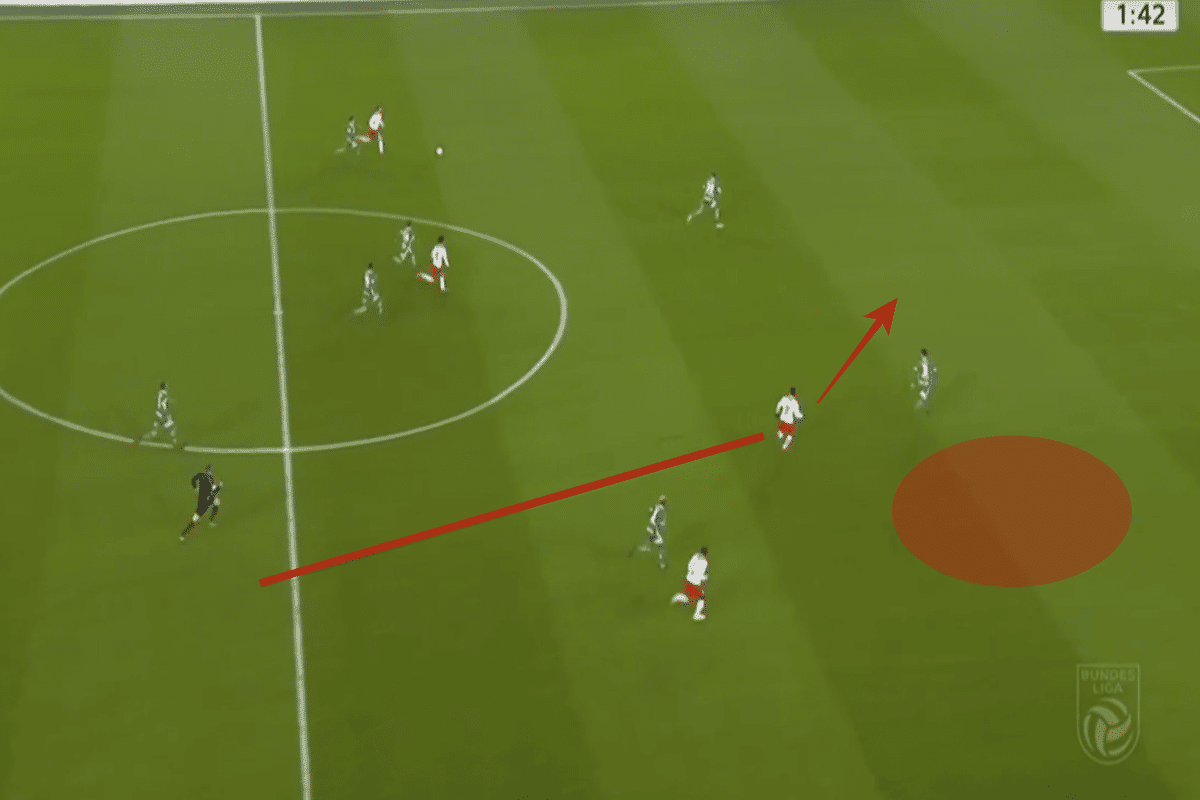 Sensing that Andreas Ulmer is going to cut back inside and play an infield pass, Hwang checks his run slightly and takes up a position on the edge, firing a first-time shot into the bottom corner for Salzburg's equaliser. 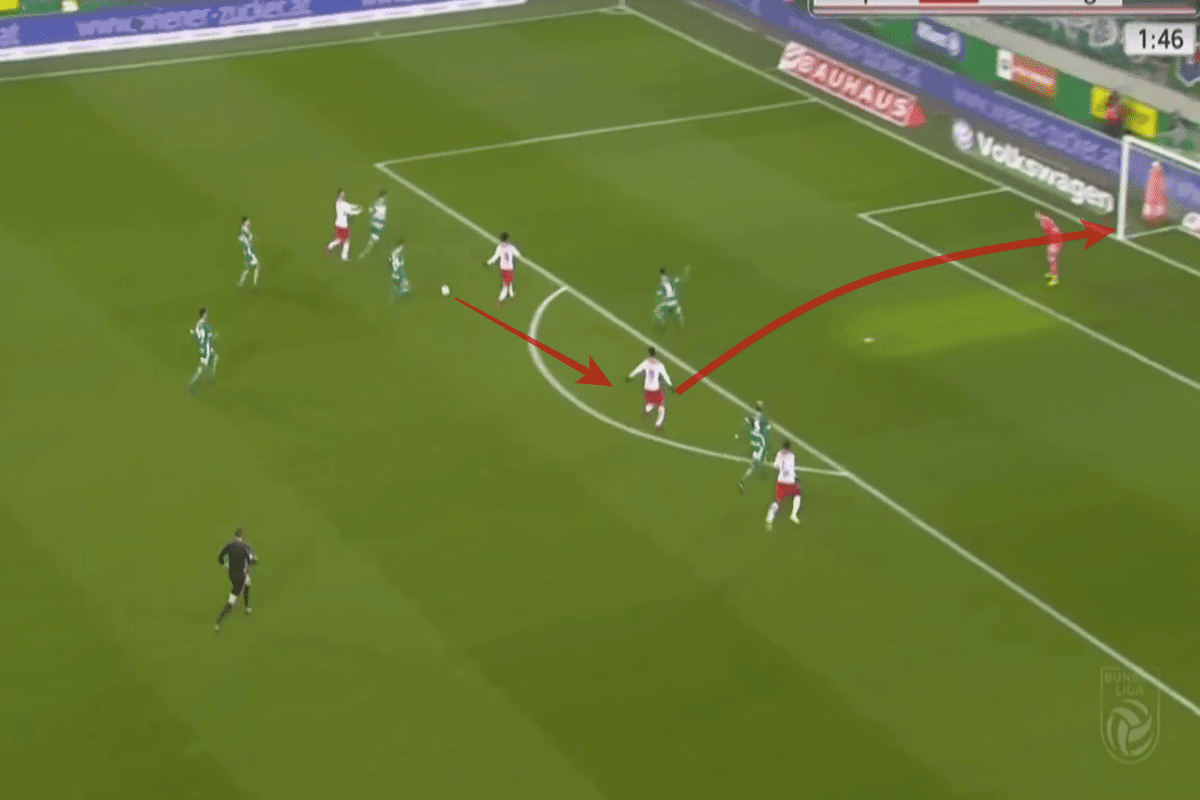 Although Hwang has primarily been deployed as a centre forward at Salzburg, he is comfortable operating on either flank, meaning there is potential to blend into the trio Pochettino deploys behind Kane which, this season, has mainly been Christian Eriksen, Dele Alli and Son.

The German Bundesliga is a stronger league than its Austrian counterpart but Hwang boasts a record strikingly similar to that of Son by the time he signed for Spurs. Whereas Son's record at Leverkusen was 29 goals in 87 appearances, Hwang's is 28 in 83 with Salzburg.

Son, while still only 23 when he arrived at White Hart Lane, was a much more established player by the time he made the move to the Premier League, having been capped 44 times by South Korea at that stage, including turning out for them at the 2014 World Cup.

However, Hwang's stats suggest that there is enough talent to work with. He manages 1.17 open play key passes per 90, slightly lower than Son's 1.3, while his 0.39 goals per game ratio is not to be sniffed at.

Interestingly, while Son's passing accuracy is vastly superior at 85 per cent, Hwang has a higher shooting accuracy, 55 per cent compared to 43.

Son is three years Hwang's senior and is, at this stage of his career, a more rounded, accomplished attacking unit compared to the one that arrived three years ago, and the player has put that down to Pochettino's coaching.

The belief at the club seems to be that Pochettino can develop Hwang into a similarly effective option in attack. Son's clinical edge has been sharpened at Spurs. In his debut season, he managed eight goals in 40 appearances, but that return improved drastically in his second, with 21 in 47. He's been similarly efficient throughout the current campaign, finding the net 18 times in 45 games.

While it may take Hwang a couple of years to achieve that level of output, there is a possibility that the player could come for a fee significantly south of £20million. That's modest by today's standards and, should Spurs opt to go for it, he has the natural ability to thrive alongside his compatriot in one of the Premier League's most exciting attacking set-ups.