Derby's unbeaten start fell to bits on Saturday as they shipped two injury time goals to Peterborough. Will they bounce back here? Find out with our Hull vs Derby match preview with free tips, predictions and odds mentioned along the way.

Hull vs Derby: Trio of tips

Hull to bounce back with a win

Hull were outclassed by an impressive QPR side last season but don't be fooled, Hull are more than capable of competing at this level. They were far superior to Preston in their opening match of the season and there are a lot of similarities with this match in that Preston were vulnerable; Hull punished them. It's hard to believe Wayne Rooney's men won't be vulnerable in this game. Their entire pre-season has been a circus and, despite a good start, the manner of their defeat to Posh on Saturday could cause lasting damage.

Derby might be one of the favourites for relegation this season but they've at least been scoring goals, which gives them a chance of winning games at some point. They have scored in each of their last five fixtures and are averaging 1.6 goals scored per game. The issue comes when you realise they seem incapable of shutting a game out; it's been 10 competitive matches since their last clean sheet way back on April 2nd. Hull blanked against QPR last time out but scored four past Preston to show they do know where the net is.

Magennis to score at anytime

With our prediction already made that both teams will score our attention now turns to who will score. Our tip is that Hull's 31-year-old attacked Josh Magennis gets on the scoresheet. The Northern Ireland international scored 18 goals last season with a goal involvement (including assists) every 110 minutes. So far this season, his record stands at played two, scored one. We think he'll be in the thick of it on Wednesday evening.

Betting odds for Hull vs Derby

Derby to suffer another blow

Derby's morale was in what you can, at best, describe as a fragile place prior to the weekend's football; after what happened in that match it simply has to be near to rock bottom and Rooney has an enormous job to galvanise his troops. That's especially true with Colin Kazim-Richards now out with injury too; youngster Jack Stretton came in on Saturday and scored a good goal but, boy, it's big pressure on a 19-year-old. As for Hull, they looked a class above last week against Preston but were taught a lesson in football by QPR last time out. Their boss, Grant McCann, would have still been able to take some positives from the game though.

The last word on Hull vs Derby 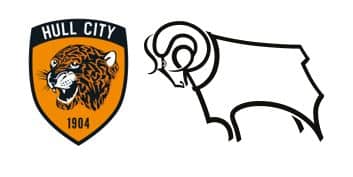