Hull started the season so well but now find themselves on a four game winless run with one of the promotion favourites coming to town. Can they break their winless run? Find out with our Hull vs Bournemouth match preview with free tips, predictions and odds mentioned along the way.

Bournemouth to bounce back from midweek madness

Hull began the season in such a positive manner what with slapping Preston 4-1 in their own back yard but, boy, was that a false dawn! They've since exited the League Cup to League One Wigan and lost three Championship games on the spin. Bournemouth meanwhile are unbeaten in the league with eight point from 12 seeing Scott Parker's men amongst the better performing sides at this early stage. We can't ignore the 6-0 defeat dished out by Norwich in the week but that was a much changed XI and Parker has scolded his team regardless. Saturday will see a reaction.

A clean sheet for the Cherries

We've just touched on Bournemouth shipping six goals and now we're backing them to keep a clean sheet. Are we bonkers? We don't think so. For one thing, Hull have lost to nil in their last three matches but, more than that, so often after a big loss you see teams tighten up in the next game to eradicate those mistakes. You know for a fact there will be a few hours of watching defensive howlers before Saturday and it will be fresh in the players' minds for Saturday.

The final prediction we make is for the match to see a fair few goals. We're opting to tip at 2.5 but, to be honest, we were tempted to push harder at 3.5 given the history these teams share; the last three meetings have all seen a minimum of four goals scored with an average of 5.0 per match. As for recent form, Hull have passed the threshold of 2.5 in two of their four league games this season whilst Bournemouth have seen four of their last five go over 2.5.

The best odds for Hull vs Bournemouth

Hull's campaign started with such hope with their opening day win but it's been downhill since then with goals severely lacking along with results; that makes them look agonisingly at the treatment room where Mallik Wilks finds himself – he bagged 19 as the Tigers won promotion last season. For Bournemouth, their league form has been good and they look a decent outfit under Parker's tutelage. The manner of their 6-0 League Cup loss will upset him a lot but they do have Gary Cahill to come in at the back; he'll be a quality addition at Championship level and might make his debut at the weekend providing he can prove his fitness.

FAQ for Hull vs Bournemouth 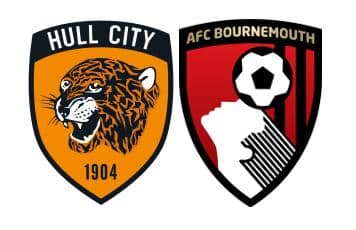