Some signings hit the ground running straight away, whereas others are slow burners. Ezequiel Schelotto is definitely the latter.

After arriving at Brighton and Hove Albion on transfer deadline last summer, it took until December 9 for the Italian to start with veteran Bruno preferred at right-back for the Seagulls.

Yet, the 28-year-old has got the nod for Brighton’s last four games and looks like making the spot his own.

That’s probably no surprise though given his experience and the fact Bruno is getting on at 37.

When Schelotto signed from Sporting Lisbon, Seagulls boss Chris Hughton was quick to highlight his impressive pedigree. “We are delighted that Ezequiel is joining us,” Hughton said. “He has made nearly 190 appearances in the top flight in Italy and Portugal, has played in the Champions League and is the type of experienced player we want to add to the squad.

“He can also play as a more attacking wing-back and so gives us some good options in defence.”

Those qualities have been evident in recent weeks as he’s become a more prominent part of the side since mid-December.

Speaking last month, Schelotto told The Argus: “I’m really happy with how it’s going. This is what I wanted.

“I have waited a long time to have a few games in a row. I think I’ve shown some of what I can do but I’m not going to be content with that. I’ll keep working, keep improving.

“I’ve got my head held high, I’m feeling very calm and happy. I feel I have adapted very well to English football. I’ve been getting up and down the pitch a lot but that is my way of playing. I’ve done it all my clubs in the past.

“I’m a player who attacks a lot, who helps colleagues up front. I know how to defend. The first thing in a full-back’s head is to defend. But today full-backs attack a lot and the gaffer gives me that freedom to use my best footballing characteristics.”

It’s no coincidence that since December 26, when Schelotto started to get a more regular run in the team, Brighton have started to go for it a bit more in attack.

Before their Boxing Day game against Chelsea, the Seagulls were averaging 6.4 shots per game. Since then they’ve been averaging 8.5.

Only three teams have scored fewer goals than Brighton’s 22 in the Premier League this season, with the Seagulls averaging less than a goal per game.

What’s more, their xG of 24.1 is also the fourth lowest in England’s top flight. Sitting in 14th, just two points above the relegation zone, they need as much of a goal threat as possible and that’s why the one-cap Italy international has come into the team.

He gives them an attacking threat from right-back that Bruno doesn’t have, which you can see if you compare the duo’s stats. 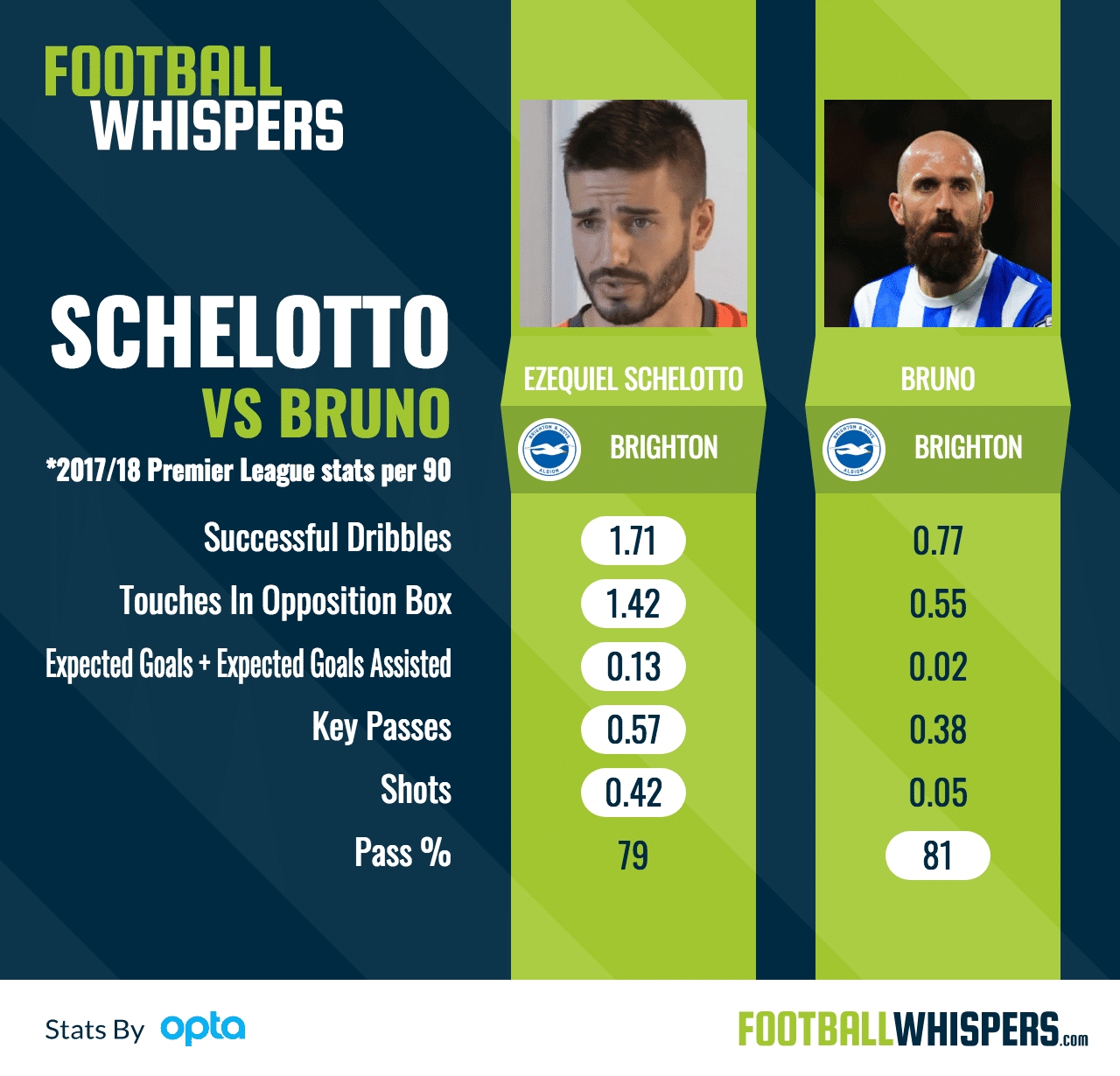 Bruno offers defensive stability, whereas if Hughton wants to take the handbrake off, Schelotto is the answer.

With Bruno approaching the end of his playing career at 37, Schelotto could, and probably should, become the Seagulls' first-choice right-back going forward.

While Brighton's Premier League place is by no means secure, playing the Italian suggests Hughton is beginning to shown more attacking intent, not only to dig in and survive but to push on and cause a threat at the other end too.

This is summed up perfectly by the game against Chelsea last month. Although the Seagulls lost 4-0, they were unlucky to do so. The game could have worked out if differently Schelotto had got either of his two penalty appeals, and they both could easily have been given any other day. He caused the champions problems and looked the second-best player on the pitch after Eden Hazard.

Now he’s up to date with English football and starting to bomb down the right flank, he could be one of Brighton’s biggest assets.