Will Hughes knows better than most about the virtues of patience. Long linked with a move to the Premier League when he was still a prospect at Derby County, the midfielder suffered a major knee ligament injury before finally getting his move in the summer.

When he completed an £8million switch to Watford there were plenty surprised he had not joined a bigger club. He had, after all, been subject of Liverpool transfer rumours at one stage.

But having finally got his Premier League move, off the back of a starring role for England at the Under-21 European Championships, Hughes made the bench just once in the opening weeks of the season. The only action he saw came in the Carabao Cup defeat to Bristol City, a game in which few members of a much-changed side were able to truly shine.

However, injury to fellow summer signing Nathaniel Chalobah changed everything.  A midfielder light, Marco Silva finally gave Hughes his Premier League debut off the bench in a 1-0 home defeat by Stoke City at the end of October.

That was followed up with a shock first start in the 3-2 defeat at Everton prior to the international break and by that stage, Silva had seen enough to hand the prodigious midfielder another start in Sunday's 2-0 triumph over West Ham United.

Hughes rewarded that decision after just 11 minutes, spinning inside the Hammers' penalty area to fire the opening goal past Joe Hart with his first shot in the Premier League. Not a bad way to introduce yourself to top-flight football.

And, as if that was not enough, Hughes supplied the second for Richarlison, striding through the middle of the centre circle and picking out the Brazilian's run with a delightful pass which cut the hapless Hammers open.

Speaking to Sky Sports after the game, Hughes was asked how it felt to score his first top-flight goal. “A massive relief,” was the midfielder's honest admission after completing 84 minutes.

“Just to be playing is a big achievement so to get the win, in the end, is the icing on the cake.

“It is frustrating having not been playing, but we’ve done the job and got the three points.”

Hughes showed he is more than ready to hold down a regular place in Silva's side. Stationed behind Andre Gray, the 22-year-old drifted between the lines and caused West Ham all manner of problems. He linked well with right wing-back  Kiko Femenía and showed a similarly impressive understanding with the tireless Gray who did everything except score.

Unsurprisingly his performance was rightly rewarded with the man of the match gong. But what was a surprise was the position he took up on the field; out on the right more often than not. Nominally playing on the right of the two No.10s stationed behind Gray, the expectation would not have been for Hughes to operate so clearly on the right. 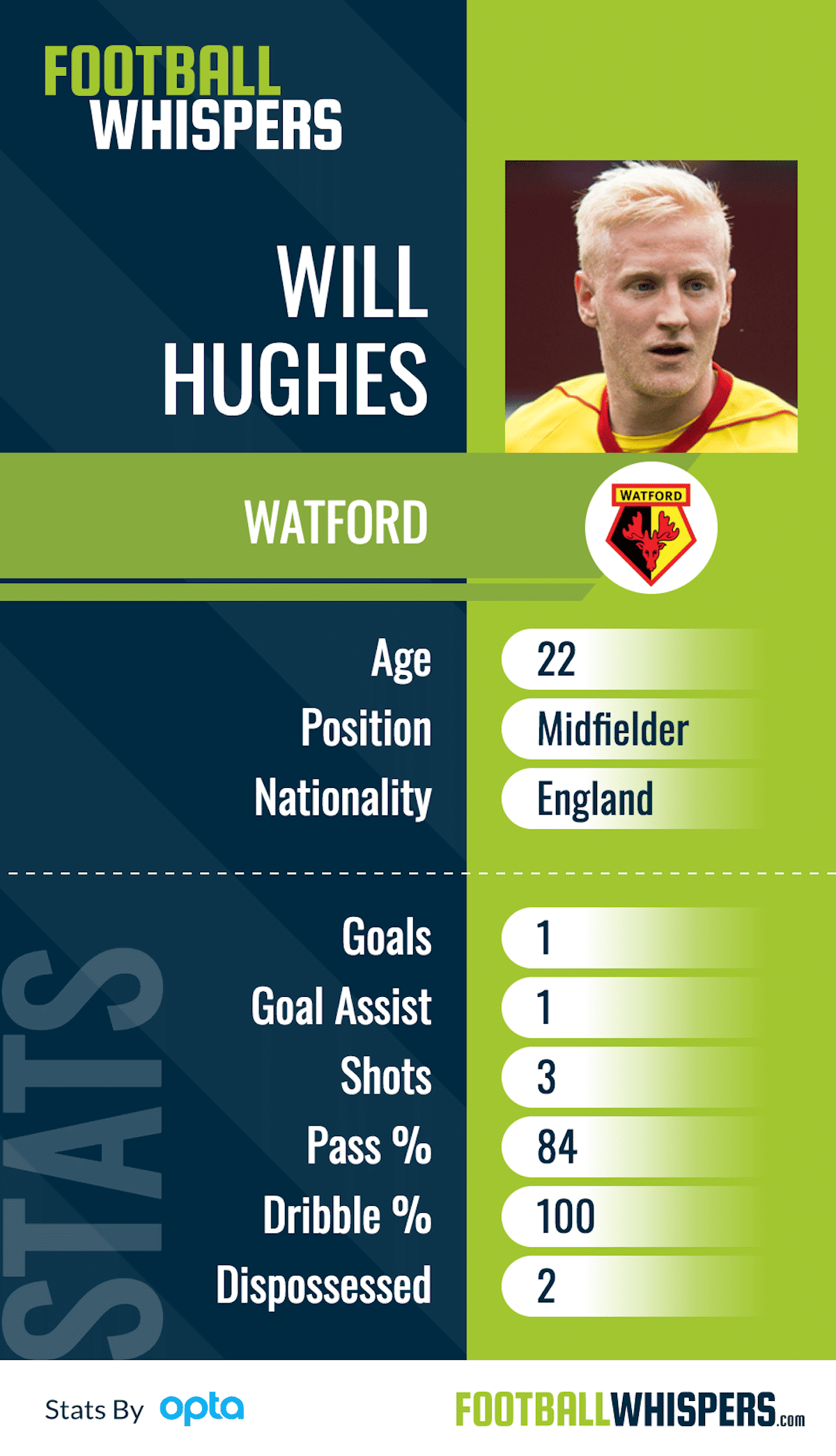 And speaking on Match of the Day 2, Hughes admitted it was a role he had not really performed since his school days.

“It's known that I'm not the quickest of players, so I've got to use my ability to get into the right spaces and create chances,” he said.

“I've not started many games on the right, I did at school but I don't mind doing it. The manager has been very aware of how to use me tactically, and it's paid off here.

“When we haven't got the ball, the gaffer wants me to get in and cover that left-back position, but off-the-ball you've got a job to do. On it, I've got free reign. On paper, it looks like it's right wing but on the ball Marco gives you a free-reign across the forward line.”

Although his assist for Richarlison's game-clinching second came from the centre of the park, he did much of his work from a wider position, as highlighted by his heat map, per WhoScored. 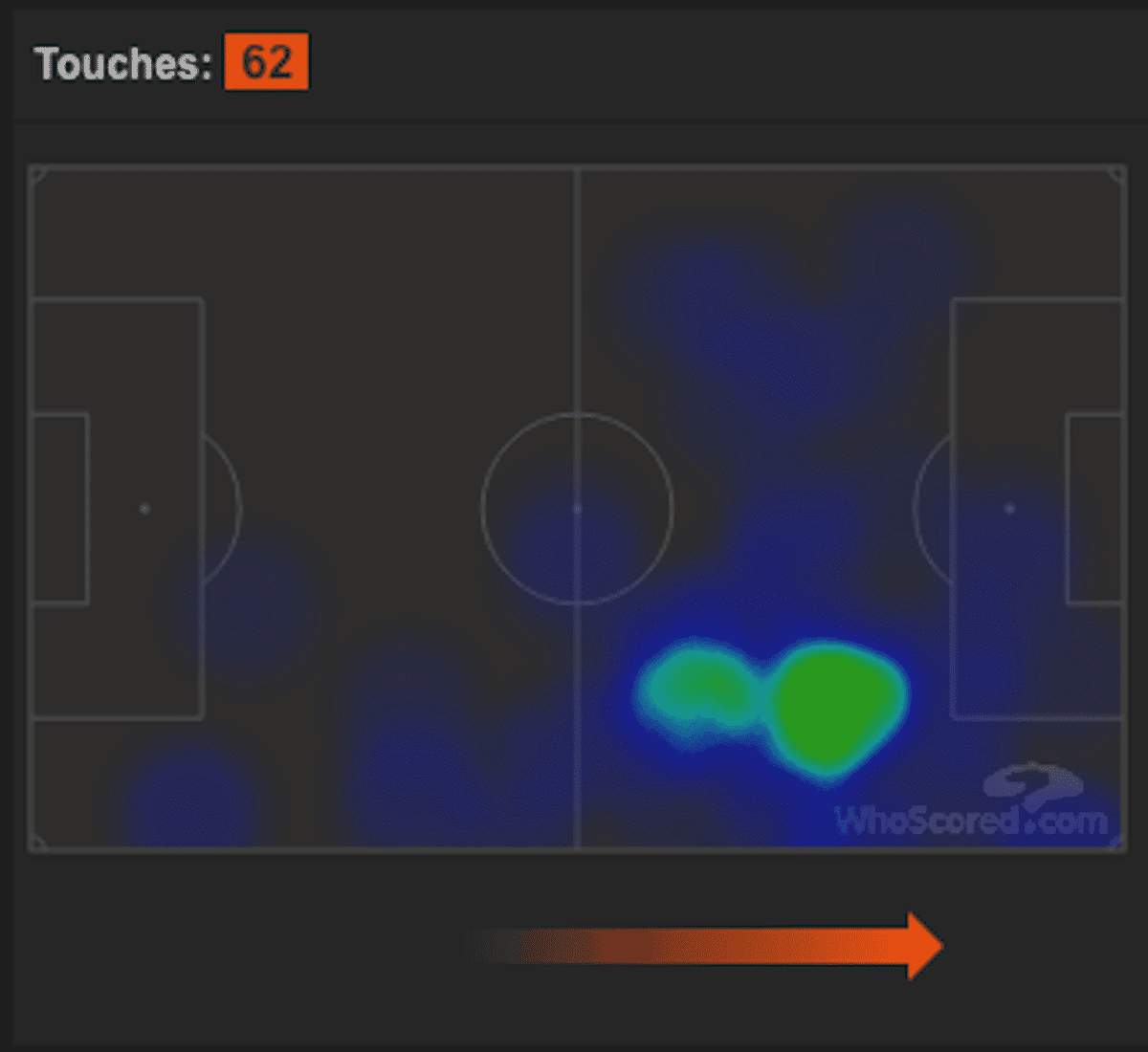 As a naturally left-footed player used to operating in the centre of midfield, Silva asked a lot of Hughes by getting him to drift out to the right. But the former Derby playmaker thrived in an unfamiliar role and was the creative hub at the centre of everything good from the Hornets.

His link-up with the similarly impressive Femenía, himself a converted wing-back who had been playing further forward until last season, was evident throughout.

Whenever the Spaniard, circled in blue, received the ball by coming short, Hughes would try to get into the space behind West Ham left-back Aaron Cresswell.

In the example below, Hughes is moving as soon as it becomes evident Abdoulaye Doucouré is going to slide the ball to Femenía. On this occasion, the Hornets are forced to recycle possession, though. 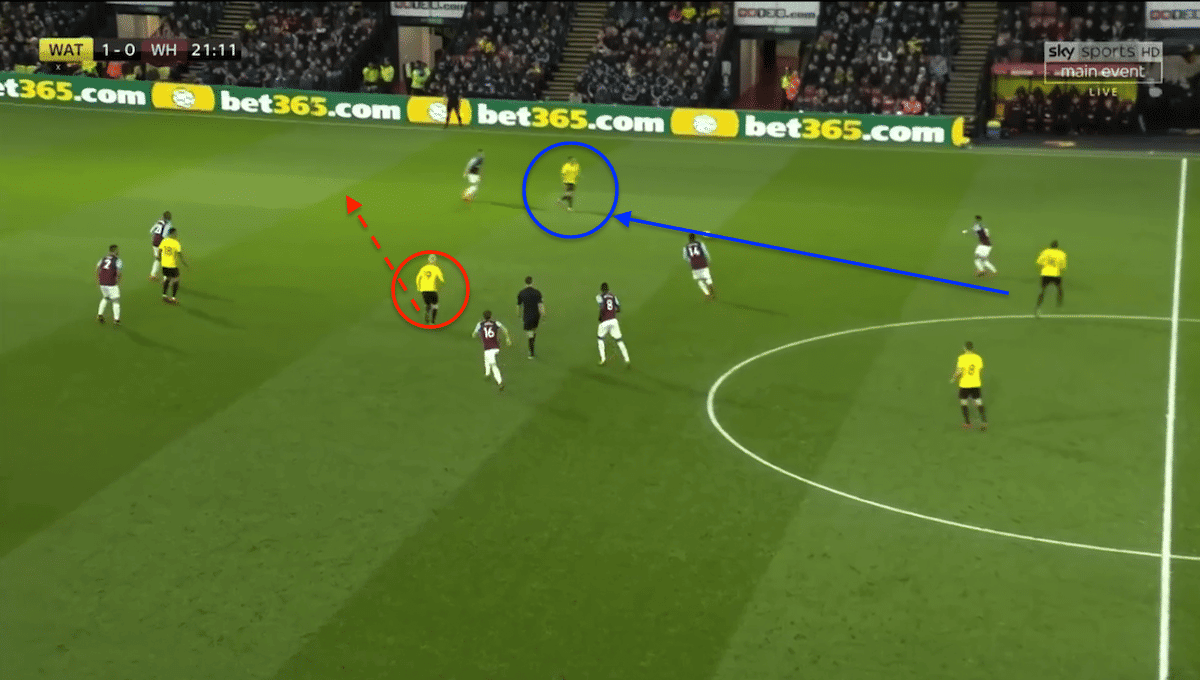 But a matter of seconds later Silva's men try the same thing again. This time it is centre-half Christian Kabasele with a fine pass out to Femenía on the right and he knocks the ball inside for Hughes (circled in red) who bursts into the space he has created. 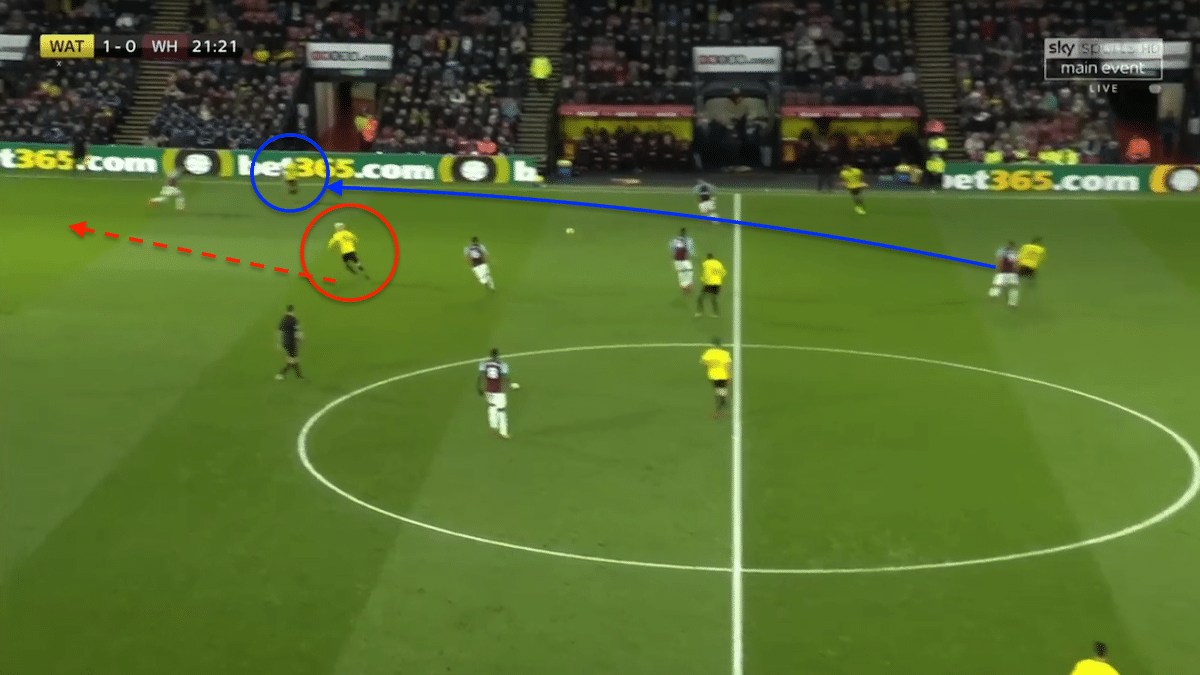 That enables Hughes to pick up possession in the final third and shift the ball onto his more dangerous left foot, thus opening up the pitch and giving him opportunities with Gray and Richarlison ahead of him.

In this instance, he goes for the latter but the ball fizzed into the Brazilian's feet bounces off of him as he is bundled to the floor and the move breaks down. 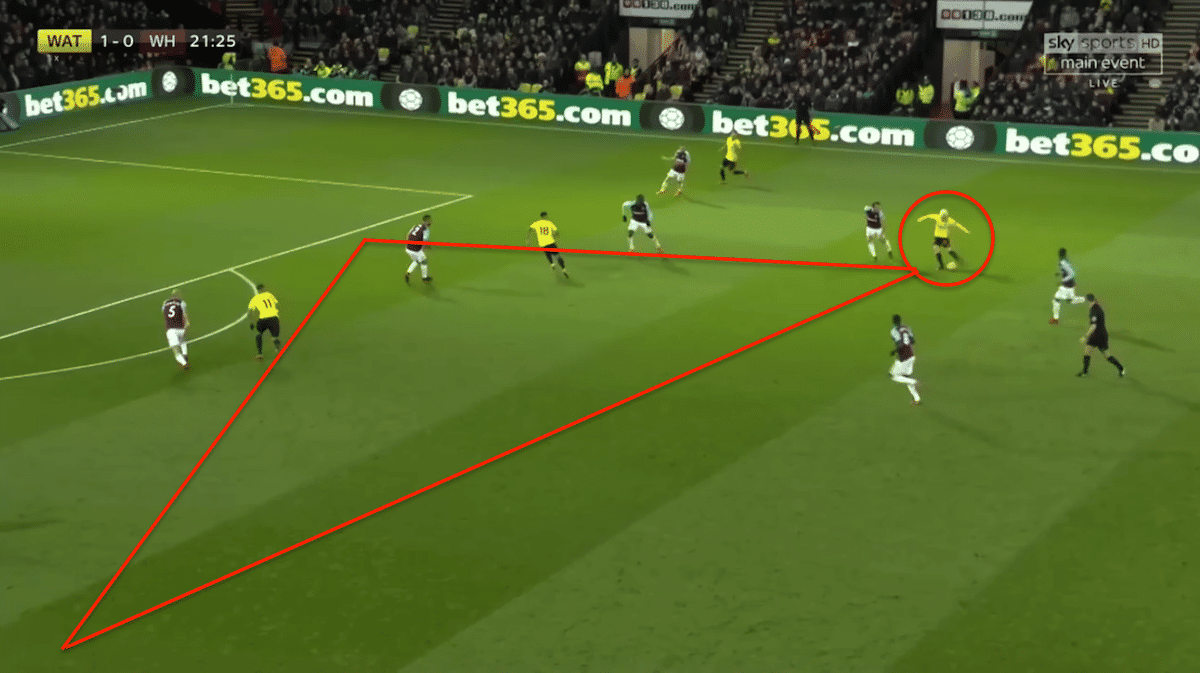 It was a theme throughout. Later in the half Hughes is at it again and you can see from the magnified image he has already adjusted his feet and body shape to dart into the vacated space behind the beleaguered Cresswell with Doucouré's pass only halfway to Femenía. 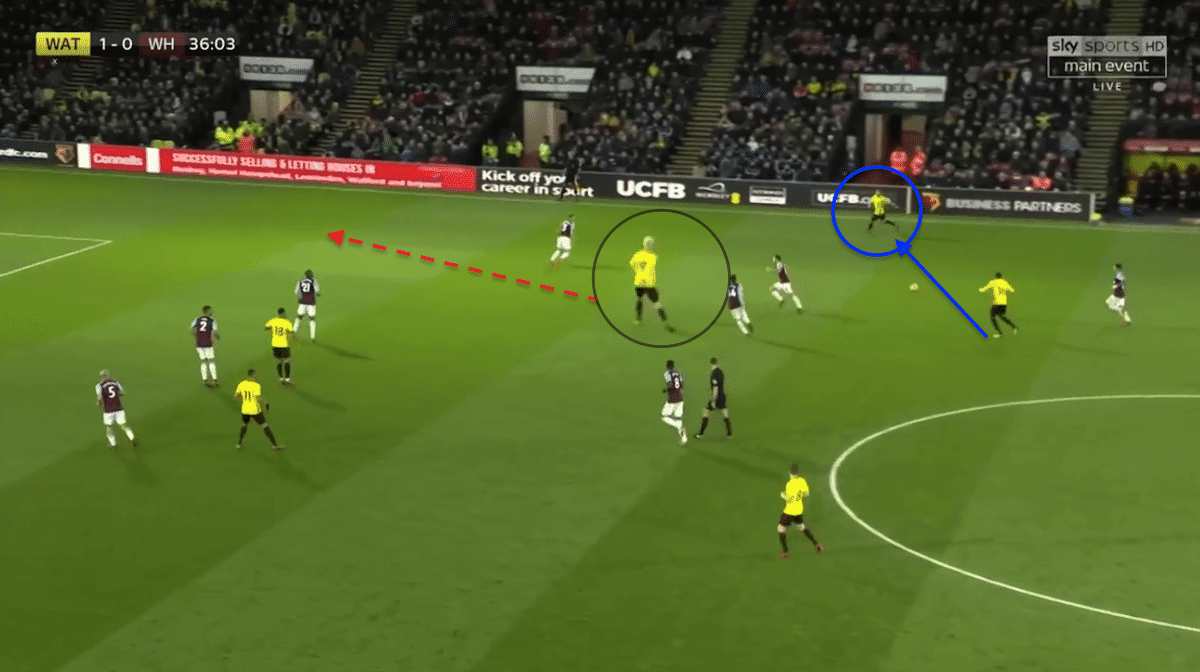 But Femenía was not the only beneficiary of Hughes' intelligence and awareness. Club-record signing Gray linked well with the former England Under-21 cap too and considering this was just their third start together, the pair showed signs of a far deeper understanding.

In the still below Doucouré rolls the ball into Hughes just outside the penalty area. Gray, circled in blue, is alert and already on the move. With Cresswell's attention taken up by Hughes and Angelo Ogbonna ball watching, Watford's No.18 darts between the pair, collecting Hughes' back-heel into his path and tests Hart with a firm shot from a diminishing angle. 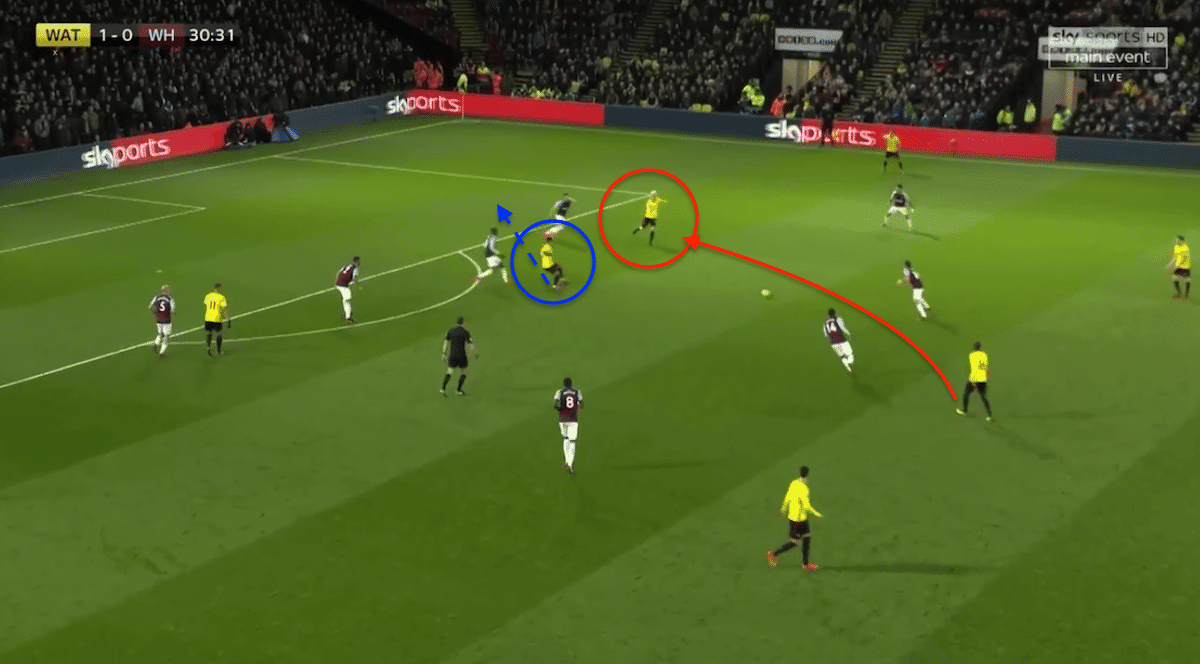 Hughes has had to show great patience to be able to show what Watford fans, and in-demand head coach Silva, what he can do. Now he must display another virtue – diligence, if he is to keep his place in the side.