Derby produced the moment of the weekend with a late leveller against Birmingham on Saturday but can they pull off another surprise here against their playoff hopeful hosts? Find out with our Huddersfield vs Derby match preview with free tips, predictions and odds mentioned along the way.

Terriers to see off the Rams

Derby might be in a good run of form but it's only good relative to their position down at the bottom of the table. The Rams have still lost four of their past 10 games whilst Huddersfield, who also have home advantage here, are unbeaten across their last 10 outings. Admittedly, the Terriers have drawn quite a few games but if they are serious about breaking into the top six, the time to beat teams like Derby is now.

Our second tip for Huddersfield vs Derby is that both teams will score. Huddersfield have seen both teams score in each of their previous four games. Derby meanwhile have scored in four of their last five matches – including their last three. The Rams have only kept one clean sheet in that time too. In respect of the head to head record, this fixture has historically seen goals for both sides. They drew 1-1 earlier in this campaign and three of the last five meetings have served up goals at both ends.

Check out the key stats & form for Huddersfield vs Derby

These teams are both showing signs of form in recent weeks but their targets for the remained of the season are vastly different. Huddersfield are gunning for promotion via the playoffs whilst Derby have their eyes on what will probably be the greatest escape of all time.

Huddersfield remain firmly in the hunt for a playoff spot as they sit in seventh place in the Championship table. A win here will put them up to fifth but they will have played two more games than sixth place Middlesbrough; that's not a huge problem at this stage in the season but it does mean they can't really afford not to take maximum points here.

Derby left it late in their draw at the weekend but it's another sign that they're not ready to throw the towel in during their battle against the odds to stay in the Championship. The gap to fourth bottom Reading is now just seven points – it could be just four after this game!

A brief FAQ ahead of Huddersfield vs Derby 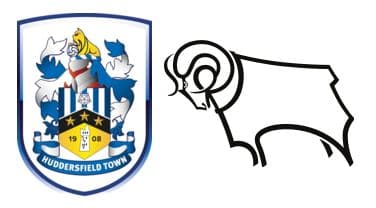