To say the Liverpool XI was a surprise would be an understatement. Huddersfield Town welcomed the Reds but it wouldn't have been a team David Wagner and his players would have been expecting to face.

Jürgen Klopp named a midfield made up of Xherdan Shaqiri, James Milner and Jordan Henderson. Roberto Firmino had to settle for a place on the bench with Sadio Mané not included in the squad at all. Instead, Mohamed Salah was joined in attack by the returning Adam Lallana and Daniel Sturridge.

Liverpool, without a win in four, started on the front foot. It was expected. However, they looked like a team who hadn't played together before. The final ball was lacking. Players weren't in sync.

The first time the Reds did link up happened in the 24th minute and it resulted in a goal. Joe Gomez played an incisive pass into the feet of Shaqiri. The Swiss bulldozer then carried the ball forward before picking out Salah's run. The No.11 then fired home with his right foot.

Huddersfield came into the game after going behind. Jonathan Hogg struck the woodwork with Alisson well beaten before Alex Pritchard had the ball in the back of the net. Unfortunately for the home side, the attacking midfielder had just strayed offside before he poked it past Liverpool's Brazilian shot-stopper.

The home side rallied and did put pressure on the Reds but Liverpool held firm and took a 1-0 lead into the break.

The second half was bitty with both sides struggling to control the game. Liverpool had the chance to extend their lead just after the hour mark when Sturridge played Salah in on goal. The Egyptian rushed his effort and pulled it wide of Jonas Lössl's far post. He should've done better and it was a huge left off for the home side.

Huddersfield's best chance of the second half arrived in the 82nd minute. A cross from the right was missed by Virgil van Dijk while Dejan Lovren could only flick it up. The ball fell to Steve Mounié in the penalty area but the 24-year-old wasn't composed enough and he fired it over Alisson's bar.

Here are five things we learned as Liverpool picked up all three points to climb back to the top of the table. 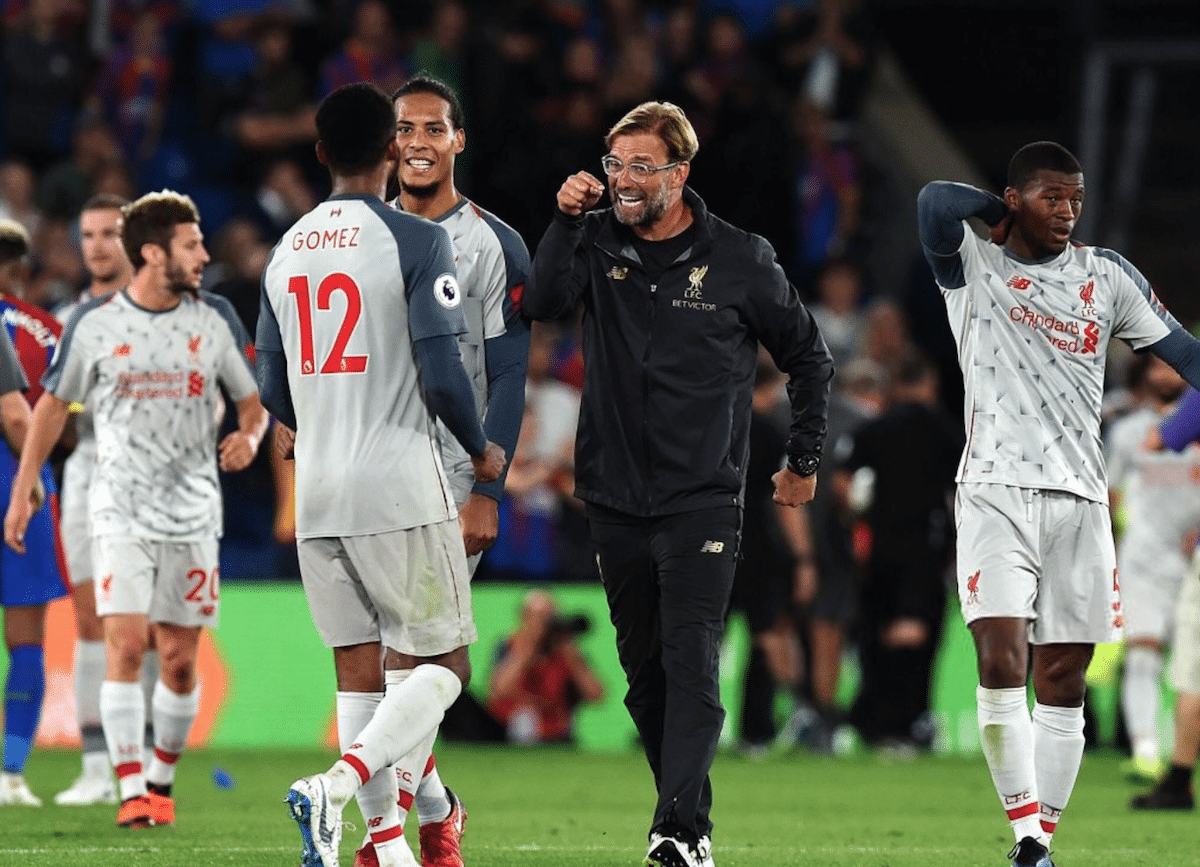 Dejan Lovren returned to full fitness and reclaimed his place in the starting XI against Manchester City and he kept it against Huddersfield. Klopp’s decision to throw the World Cup finalist straight in has resulted in Gomez being shifted to a right-back position. It’s not a role he’s a stranger to but it is one that doesn’t let him showcase his strengths.

He’s by no means limited on the ball, his ability to thread passes into the middle attacking third, just as he did for the opener today, has been a welcomed addition this term, but he doesn’t pose the same threat as Trent Alexander-Arnold. As you’d expect, he’s a more conservative full-back. This means by default Liverpool aren’t as dangerous down that right flank and it makes them easier to read. Possibly even easier to defend against.

The 21-year-old has arguably been the most consistent player for the Reds this season and, at times, has outshone Virgil van Dijk. No easy feat. The pair had struck up a formidable partnership and there was a clear understanding there with Alisson. They were the foundations for the solid defensive start to the season.

Such a change, which has seen two of the regular back five removed from their positions, can have a negative impact.

It’s a good position for Klopp to be in, having three centre-backs he clearly rates, but sooner or later Lovren will have to step aside and let Gomez play regularly in a role he could become one of the best in. But when?

A difficult balancing act for Klopp

Klopp may have opted to use a more defensive minded full-back due to the inclusion of Shaqiri and Sturridge.

The former was a bit like a dog chasing a ball against Southampton and it left the team a little exposed. Shaqiri was subbed off at half-time with Klopp looking to lock down the midfield.

The latter doesn’t have the same energy or tenacity as Roberto Firmino. Their inclusions in the starting XI offset the balance to the team. To combat this, Klopp went with players who know his system and know the demands.

Adam Lallana played the left side role when Klopp arrived and he knows what is required of him. For now, he's better than Shaqiri there, especially with no Firmino in the forward line to lead the press. Milner fills in all over the pitch and that, coupled with Gomez being more conservative in general, allows for Shaqiri's gung-ho approach. 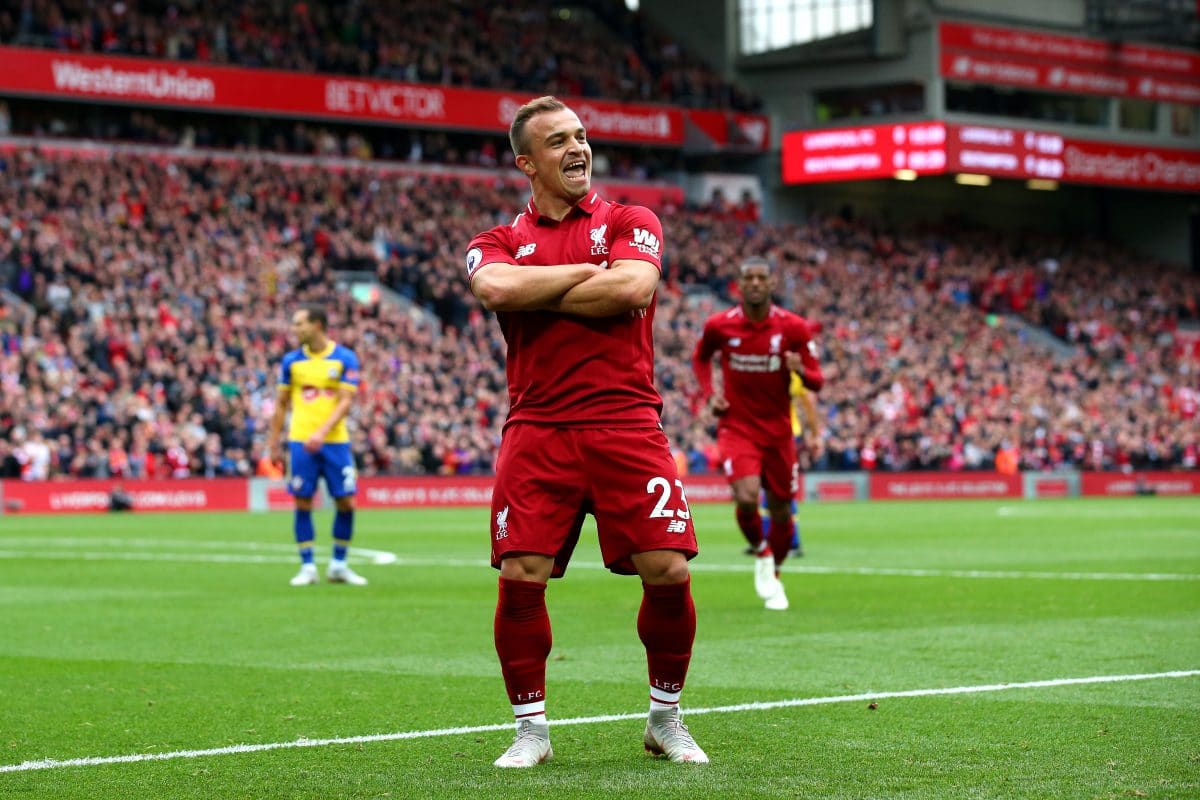 The Switzerland international has the X-factor. He brings unpredictability to the team, something Liverpool are desperately short of. The 27-year-old might not be the most disciplined but the best way to learn is on the job. With him on the pitch the Reds look more dangerous.

He isn't afraid to dribble and take a risk. Such a trait is invaluable in the modern game and it's why he gets people off their seats.

He had a role in two of the roles against Southampton during his first start. He added another assist to his name today.  Liverpool might not be as balanced when he starts but, against the lesser teams in the top flight, you just need to flex your attacking muscles. To an extent, the Reds did that today with Shaqiri joining Lallana, Sturridge and Salah in the XI. No player on the pitch created more chances in the first half (2).

Salah's drought is over

Mohamed Salah was on a three-game drought for the Reds. The phrase ‘one-season wonder' was being muttered by certain people. Truth be told, his touch has looked off and he has looked short on confidence. But all of his underlying numbers show there was nothing to worry about. He was going to start scoring again.

He broke the deadlock with what was a half chance on his weaker foot. He looked bright alongside Sturridge before his goal. After he found the back of the net he looked like the Salah of old. This was always going to be the case. It was a matter of when and not if he'd start to look like the player who broke the record for the most goals scored in a 38-game Premier League season.

Huddersfield are in trouble

Regardless of the result, the defensive performance and tactical naivety on Wagner's part should worry fans of the Terriers.

On a number of occasions it was three vs three in the defensive third for Huddersfield. Had the Liverpool front three been on the same page then this match could have been put to bed in the first half.

On one hand, the Huddersfield boss should be praised for looking to attack Liverpool. On the other, it was negligent to leave his side, who are without a win this term, so open against one of the best teams in Europe. There could have been a repeat of the 6-1 loss to Manchester City on the cards. Like Klopp, Wagner will have to find a balance if his team are going to pick up much-needed points over the coming weeks.