As Huddersfield Town travel to West Bromwich Albion this weekend, in what will be a crucial six-pointer for both sides, the Terriers will look to Jonathan Hogg to as their inspiration.

The Yorkshire side won promotion to the Premier League last year, and the defensive midfielder’s story perfectly encapsulates everything the club stands for.

Playing away at Bristol City in March, Hogg went down after a nasty clash with one of his team-mates. He spent 15 minutes on the ground surrounded by paramedics and worried onlookers.

Stretched off, the initial diagnosis was a fracture within his cervical spine. Even when he was discharged, the belief was he would miss the rest of the season.

“I had thought that was me done until next season,” he told the Daily Mail. “Which was devastating, the thought of coming this far and missing the business end. No one has given us a chance. From day one we were supposed to fall away but never have.”

Unsurprisingly, he sat out the next fixture against Burton Albion, but to the shock of everyone and a more positive diagnosis, not only was Hogg in contention for their fixture against Norwich City, but he would play 81 minutes as Huddersfield beat the Norfolk side 4-0.

An inspiring comeback, he was integral to David Wagner’s side sealing promotion, but this is not the end of the fairy-tale.

Missing the start of the current campaign with an ankle injury, when he lined up against Leicester City in September, Hogg would finally get a chance to show the Premier League how much he deserved this chance.

Back in 2012, he played five top-flight games for Aston Villa, but now 29 years old, the wiser and more experienced Hogg would grab his opportunity with both hands.

It will come as no surprise to Town fans that Hogg leads their team in tackles won per 90 minutes, plus he is fourth in terms of interceptions.

He’s a high-energy player, tough-tackling, the sort of no-nonsense midfielder loved in Yorkshire, but what impresses more is how he ranks to some of the Premier League’s bigger, more established stars.

Ranking all players who have made over 12 appearances this season, Hogg is fifth with 3.7 tackles won per 90 minutes. Which puts him above N’Golo Kanté, Oriol Romeu and Etienne Capoué.

Looking at other central midfielders with the same amount of games, he is also sixth in terms of interceptions, with 2.1 per 90. Sitting above Steven Defour, Mario Lemina and Idrissa Gueye.

It’s easy to skew statistics and argue Hogg should be ahead of players in the top six who defend less and are less likely to make tackles or interceptions. Yet, the former Watford midfielder is both challenging and out-shining players at clubs who are also battling to stay in the league.

To keep their place in the Premier League, Huddersfield need to pick up points against the clubs around them. After losing five straight and going eight games without a win, the 4-1 victory over Bournemouth was exactly what they needed, and it’s no surprise Hogg was one of the standout performers.

He finished the game winning seven tackles, making three interceptions and three clearances. He even blocked two shots and touched the ball more than any other Terrier.

Steve Mounié, with a goal and an assist, grabbed the headlines, but without Hogg anchoring the team to this extent, the French striker wouldn’t be able to make a difference. 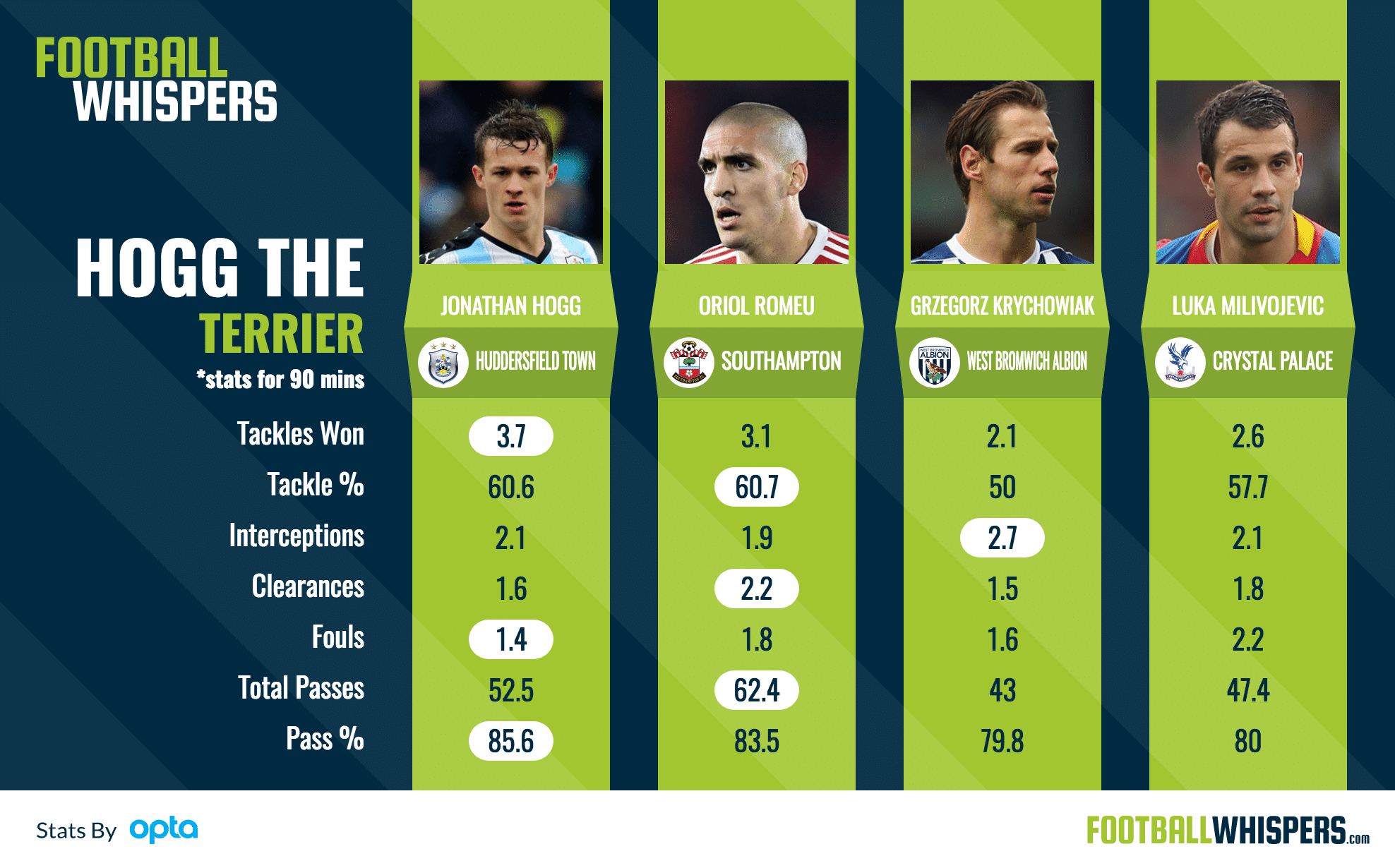 Facing West Brom at the weekend, he will come up against a similar opponent in Gregorz Krychowiak, but the Huddersfield man makes more tackles, fouls less and completes a higher percentage of passes than the Polish midfielder.

The only category where the Paris Saint-Germain loanee comes out on top is with 2.7 interceptions per 90.

Measured beside Krychowiak, Southampton’s Romeu and Luka Milivojević at Palace, Hogg is either first or second in six of seven categories.

It’s fine and impressive to dominate in one or two areas, but after 18 Premier League starts, this is not a hot-streak of form, this is consistency at the highest level and the sort of help any club facing the threat of relegation desperately needs to come out on top.

Hogg’s never-say-die attitude sets an example to the rest of his team-mates. Even 3-0 down against Liverpool with only minutes remaining, the midfielder was busting his gut to pressure the Reds' defence. It would have been easy to give up, keep your energy, but that’s not in his nature. 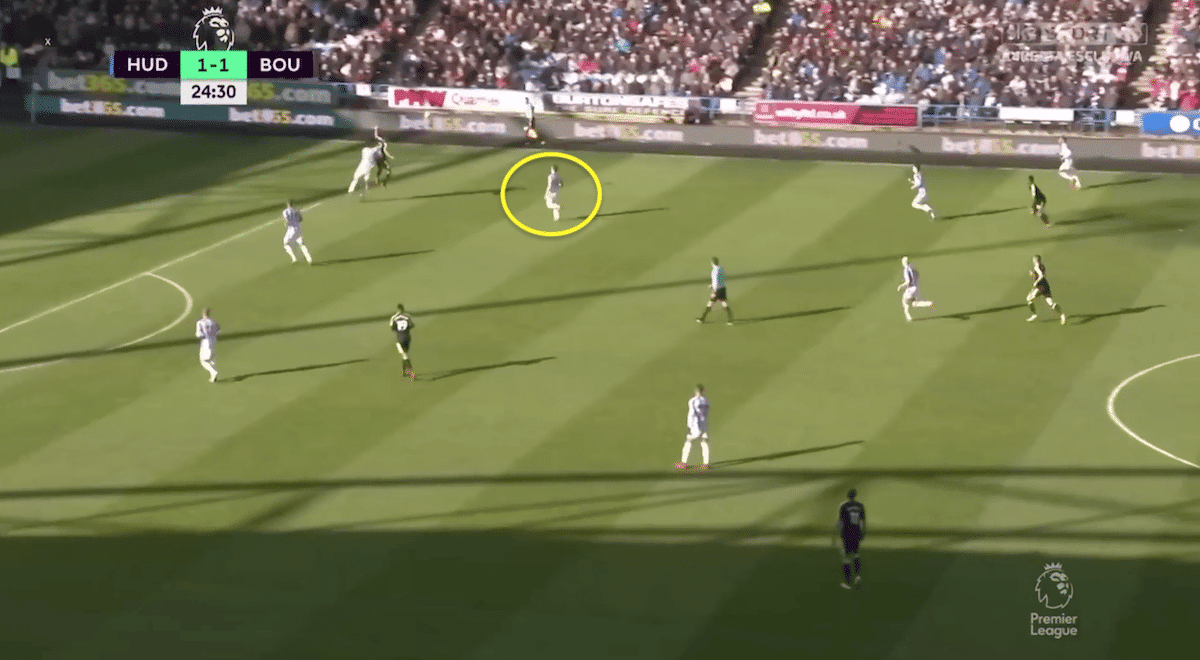 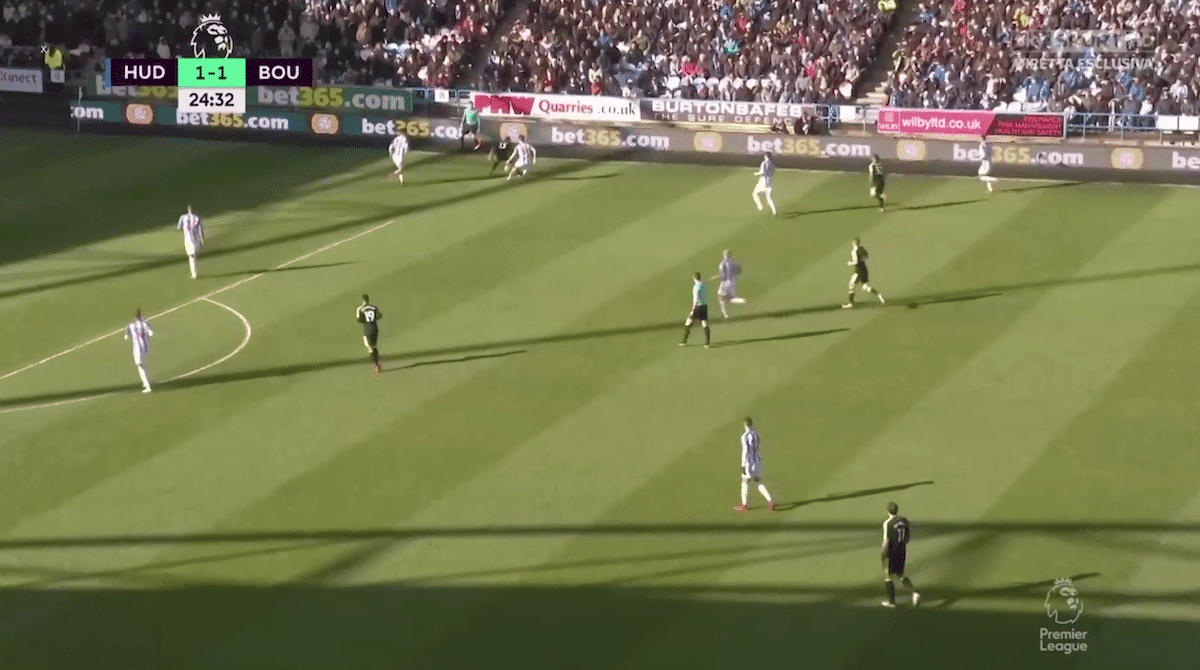 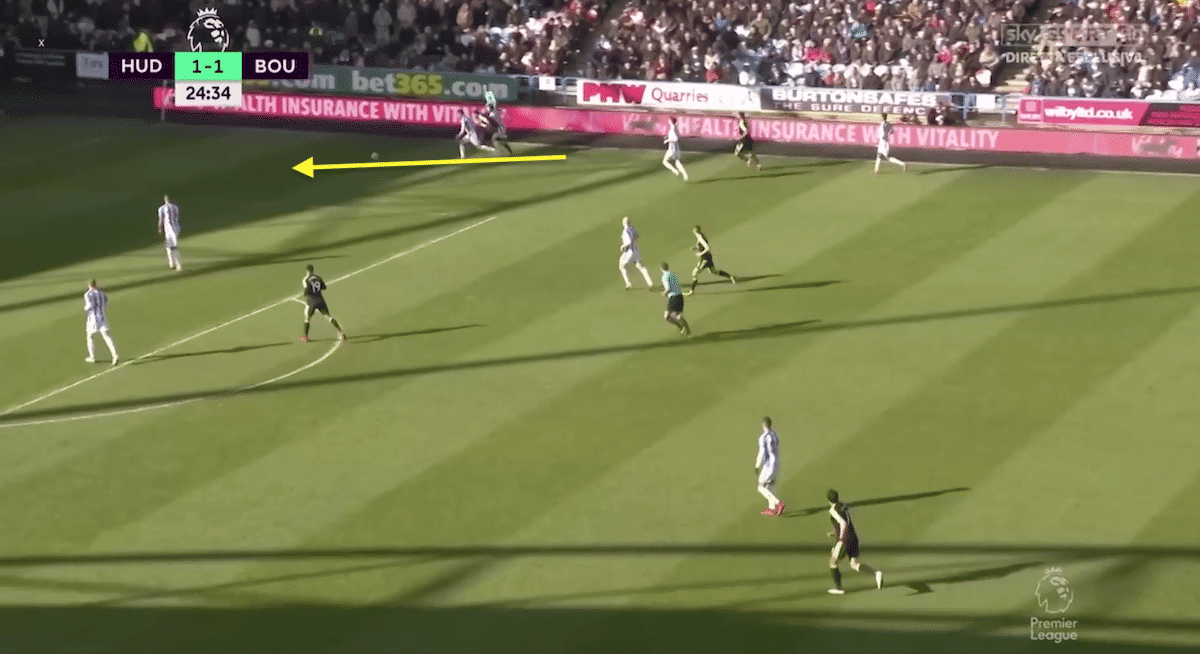 He’s the ideal example of a central midfielder who, unless you make a special point of watching what he does, all his good work can go unnoticed.

It’s the basic, simple, but understated effort he puts in which helps steady the Huddersfield ship. In the graphics above, his defending might not blow you away, but it’s impressive.

First he follows the play, either expecting to mop up the second ball or provide support to the defence. Once out wide, he squeezes up, forcing the Bournemouth attacker to go down the channel. Hogg sees it coming and is one step ahead, getting the jump on his opponent, he makes the interception and clears the danger.

Injury nearly forced the Middlesbrough native to miss the business end of their rise to the Premier League. If Wagner’s side have any chance of keeping their place in the top flight, watch for Hogg to play a huge part, you might just have to take a closer look.