Manchester City carried on their unstoppable start to the season, winning 2-1 at Huddersfield Town despite going a goal down in the first half.

After 13 games, Pep Guardiola's side have dropped just two points, which is a Premier League record.

They had 80 per cent possession but it looked for a while like they may leave with only a draw, until Raheem Sterling's late winner.

A Nicolás Otamendi own goal had put Huddersfield ahead against the run of play just before half time, but Sterling was fouled in the box less than a minute after the interval.

Sergio Agüero put away the penalty and it was an onslaught from then onwards. Here are our player ratings from the John Smith's Stadium.

Lucky not to give a penalty away at 1-0, bundled into Sterling. Other than that, he didn't do much wrong, and he was majorly unlucky for his block to bounce off the City winger and go in for the winner. 6

Grew into the game, looked very comfortable on the ball and did well up against arguably the best winger in the Premier League at the moment, Leroy Sané. 6

Had a glorious chance just before half-time, but put it just wide. He looked offside but the linesman didn't flag.

Dominant at the back for so much of the game. 7

Brilliant challenge after half an hour to get to Agüero when it looked like the Argentine was set to score and he was involved in the opening goal, as his header deflected past Otamendi to end up in the back of the net.

Was a rock at the back of the defence and unlucky to end up on the losing side. 7

The former Fulham man looked solid in the first half, but he pulled down Sterling in the box less than 60 seconds after the interval.

He needs to be doing better than that in the Premier League, although he did make three successful tackles, which was the highest on the pitch when he was taken off.

Booked for a foul on Kevin De Bruyne, which probably should have been his second yellow – he wasn't booked for the penalty. 5

Played a crucial part in keeping City's talented midfield quiet for so much of the game.

Booked for a late challenge on David Silva. 6

Didn't offer much going forward at all, but that wasn't his role. Like Hogg, was impressive in shutting things down in front of the back four for most of the game. 6 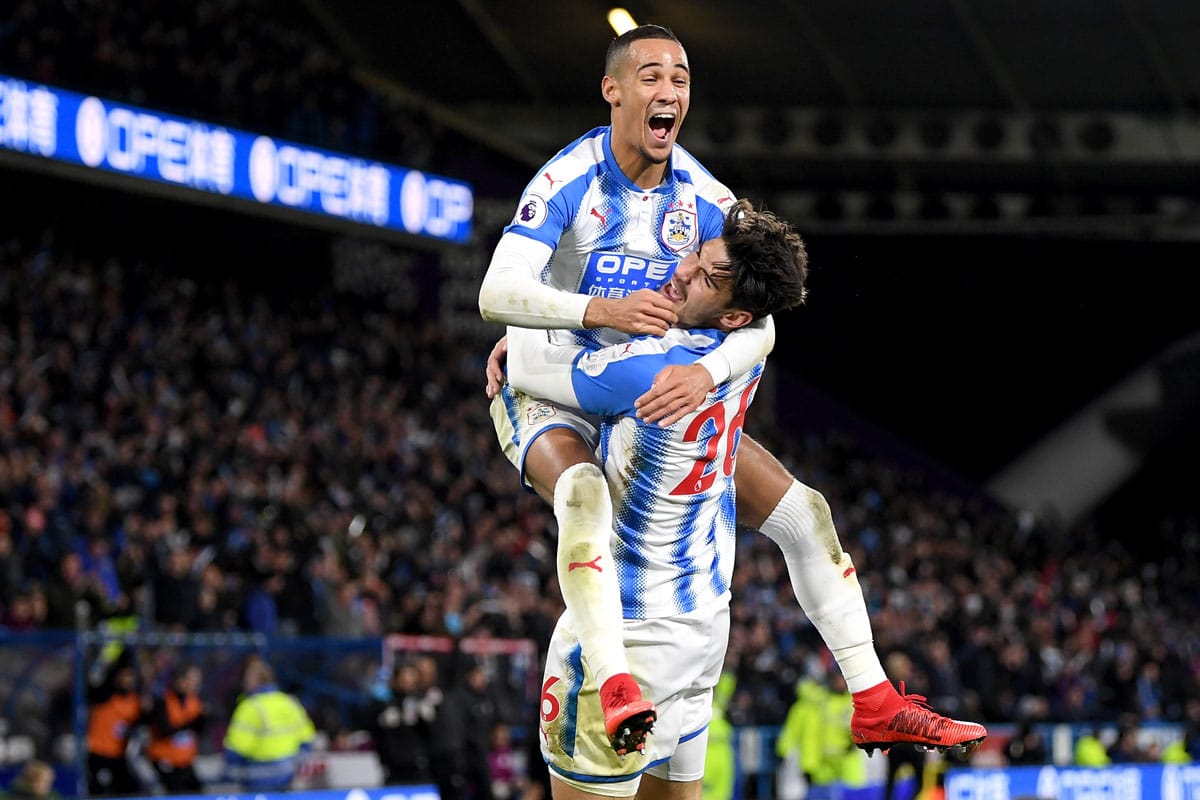 Played a lovely corner in for the first goal. Ran hard but failed to have any real impact going forward as Huddersfield had their backs to the wall. 6

A few nice touches but nowhere near his usual dominant self at the middle of the Huddersfield midfield, but then not many will dominate Kevin De Bruyne, Fernandinho and David Silva.

Disappointed a bit from set pieces, which were Huddersfield's best chance of getting into the game. 5

Lucky he didn't make any contact with Fernandinho, or he could have been sent off for a shocking challenge. Struggled to get into the game. 5

Isolated up front, hard for him to get into the game. Had one moment in the first half where it looked like he was in, but Vincent Kompany's cool defending got the better of him.

Fought for every ball, especially in the air, and won more aerial duels than anyone else – eight. 6

Had a tough time coming on against Kyle Walker and Sterling, couldn't do too much about the winner though. 5

Ridiculously at ease with the ball at his feet. Everything Claudio Bravo should have been. Rarely challenged, but City look so comfortable with him in goal. 6

Offers City so much width. Almost permanently based in the opposition's half, but made a crucial defensive clearance late on to stop Mounié getting an equaliser. 7

Rarely tested but made a great challenge to stop Depoitre going through on goal in the first half. Taken off as City searched for the winner. 6

Pushed forward from the back a lot, especially in the first half, as City looked to try and break the deadlock.

It was in fact the Argentine who scored the first goal of the match, just at the wrong end. He couldn't do too much as Schindler flicked on a corner, which it hit his shoulder to fly past Ederson. 7

Nowhere near as attacking as fellow full-back Walker, but no-one ever tested him defensively. Whether that was down to him or Huddersfield's lack of attacking will was hard to tell. 6

Lost Schindler far too easily for the opener, always looked classy but nowhere near his usual dominant self. 6 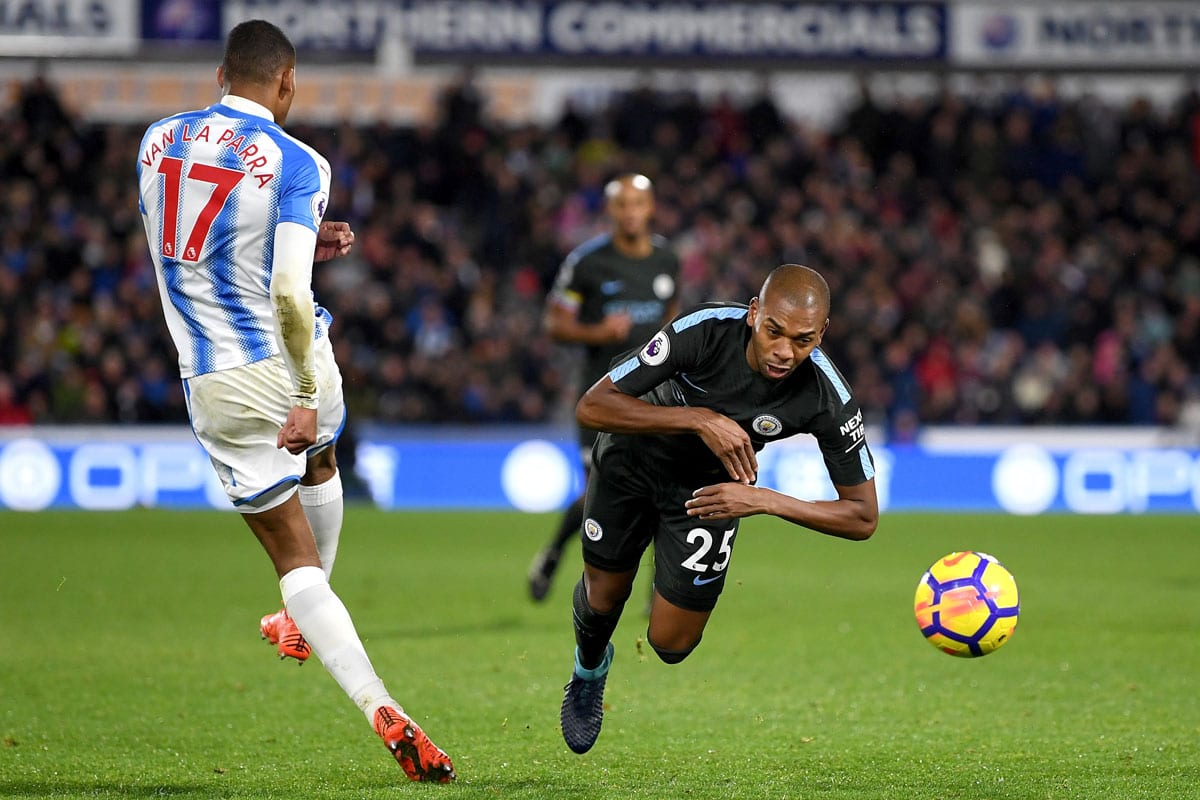 Booked for simulation after diving to the floor after van La Parra threw a leg at him and didn't make contact.

Crucial in keeping things ticking over and putting pressure on the Huddersfield back line, with a pass accuracy of 93 per cent. 7

The Spaniard is pure class, but that's nothing anyone who's watched him before won't have known.

It was no surprise that he was involved in City's equaliser – his ball sent Sterling through, before the England international was brought down in the box.

He made 99 passes and was the City midfielder making things happen. 8

Wasn't his usual self in the first half but came out in the second half really fired up. Had an early penalty claim before the one that he won less than 60 seconds after half-time.

Although he didn't know too much about the winning goal, it was fitting that it was him who got it – his spark was the difference between the two sides. 8

Had a goal rightfully ruled out for offside early on, but got City's equaliser from the penalty spot, his ninth of the season. Always a threat. 7

A livewire as ever, never stopped causing Huddersfield problems. Unlucky to hit the bar with a long-range free-kick. 7

Played a role in the winner, causing chaos in the Huddersfield defence. 6