Harry Kane took his September tally to 13 in just eight games with a brilliant double as Tottenham Hotspur taught Huddersfield Town a brutal lesson with a 4-0 win at the John Smith's Stadium.

Mauricio Pochettino's side were breathtakingly good at time with the attacking trio of Kane, Dele Alli and Christian Eriksen running riot.

Spurs took the lead when Kane latched onto Trippier's header over the top, advancing into the box and firing past Jonas Lössl at the near post after nine minutes.

Ben Davies doubled up seven minutes later, meeting a loose ball in the area and slotting past Lössl to register his second of the season.

Chances continued to flow for Spurs and Kane curled home a stunning third after 23 minutes to underline the North Londoners' dominance.

This was the day Huddersfield feared. David Wagner's side are committed to pressing high and attacking. It's an approach which has served them well so far. And prior to today, the Terriers had conceded just three times since promotion to the Premier League.

But the Yorkshire outfit's approach leaves them susceptible and they were found out by Spurs who brutally and brilliantly exploited their shortcomings in a ruthless 25 minute period.

In the second half the hosts changed tact and were able to keep their heads above water. Substitute Moussa Sissoko completed the rout at the death, poking home from close range to cap Spurs' biggest win of the season and their seventh straight away win in all competitions. 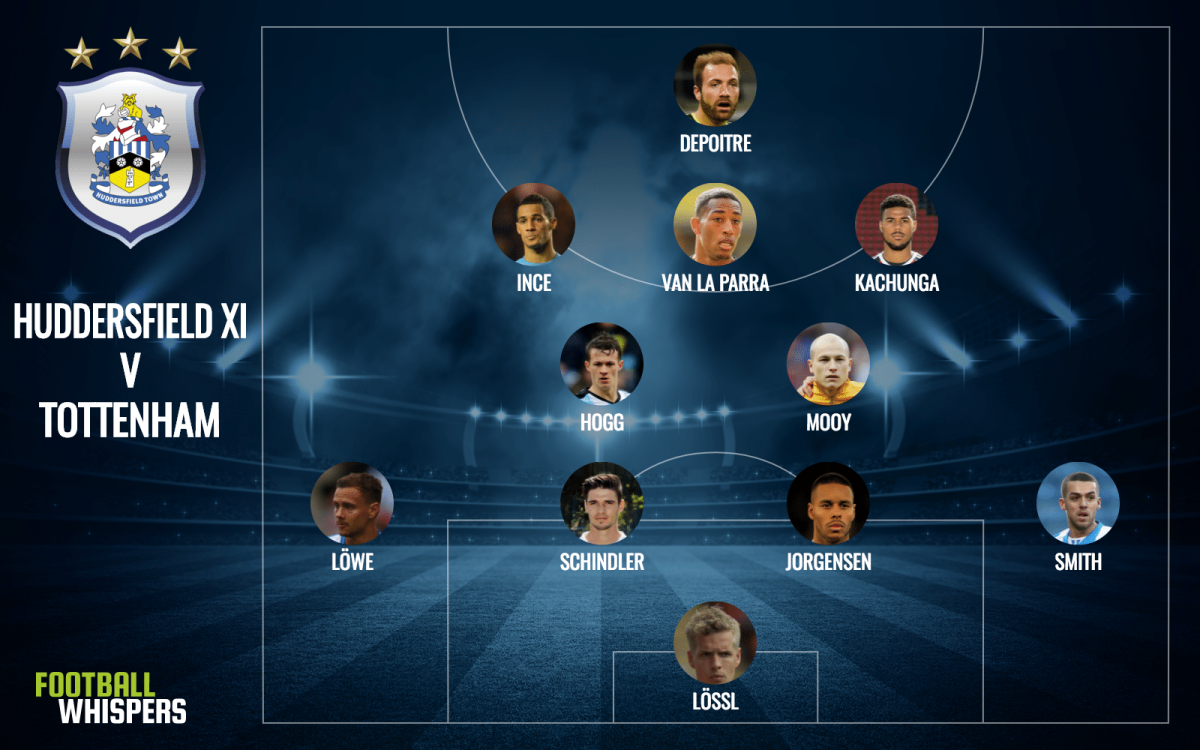 Although he was hardly helped out by his backline, the Terriers stopper could perhaps have done better with Kane's opener. He gave Spurs' No.10 the option to go either side of him with his positioning questionable and the Premier League's most in-form forward was never going to pass up that invite.

There was nothing he could have done about the second but the Danish stopper was nearly left embarrassed a couple of minutes later when he dawdled on the ball and lost possession to Kane. He atoned for the error by blocking the Spurs man's shot.

Huddersfield's ambition was summed up perfectly by the number of men they committed forward from the word go. And skipper Smith was among their number, driving forward and unleashing a stinging left-footed drive which Lloris had to parry to safety.

But he was caught horribly out of position for Tottenham's second with Davies afforded the freedom of the hosts' penalty area to rattle home.

The big Dane set his stall out in the opening 15 minutes, going toe-to-toe with Kane and winning the physical battle. But that was a rare victory up against last season's Golden Boot winner and Kane had the last laugh.

Spurs were like a hot knife slicing through butter and it was not just Kane. Left for dust for Kane's second, Zanka was turned inside the penalty area by Alli who, had it not been for the post, would have slotted home the visitors' fourth after just half an hour.

Along with central defensive partner Zanka, the German never got tight enough to Kane, Alli and Eriksen and the Spurs trio were allowed to run the show.

The one time in the first half that he did get close, Alli punished him by flicking the ball around the corner to make the second. He was then left flat footed by Kane as he curled home his third of the afternoon.

Like fellow full-back Smith the former Kaiserslautern man was tasked with pressing high and supporting the Terriers' attacks.

But it was the German's lapse in concentration which allowed Spurs to take the lead with relative ease. A routine header over the top from Trippier caught Löwe out of position and Kane drove into the space left in behind and fired past Lössl with unerring accuracy.

And, just to compound Lössl's misery, it was his untimely poke into Davies which enabled the left wing-back to gallop into the box and bag the second.

The former Manchester City midfielder tried to keep things ticking over in midfield for Huddersfield and had made the second-most passes – just behind Smith – of any Terriers player when he was substitute after an hour.

Mooy's set pieces were the closest thing to a problem for Spurs.

The former Watford and Aston Villa man offered minimal protection to Huddersfield's over-worked defence. Hogg won all three of the tackles he attempted and completed 83 per cent of his passes but it was not enough

Largely ineffective on the right-hand side, the former Ingolstadt man got little change out of Alderweireld and did not manage a single dribble in 90 minutes. He worked tirelessly with little service but ploughed a lone furrow in the second period. What did not help was his dismal 40 per cent pass completion.

Brought into the side in place of Abdelhamid Sabiri, the Peruvian winger got on the ball in the early stages and looked as though he would be one of the players, along with Ince, who could cause Spurs problems.

But the former Wolves attacker could not sustain that and mustered just a single shot for the hosts, as well as succeeding with just one of his four dribbles.

In the early stages it looked as though Huddersfield would make a fist of the contest and Ince was central to that, drifting from the centre into wide areas and trying to affect the play.

But as the Terriers lost control of the game the former Crystal Palace and Derby County attacker's influence began to wane.

A lack of service severely restricted what the big Belgian was able to do, though he briefly had Lloris worried just before half time when he strode forward and cracked the crossbar from distance.

It got no better in the second half. A thankless afternoon's work for the former Porto forward.

The rangy midfielder was introduced with half an hour remaining and injected some energy into midfield but little else.

Brought on to spare Löwe's blushes as much as anything, the former Fulham man stemmed the tide down Huddersfield's left. 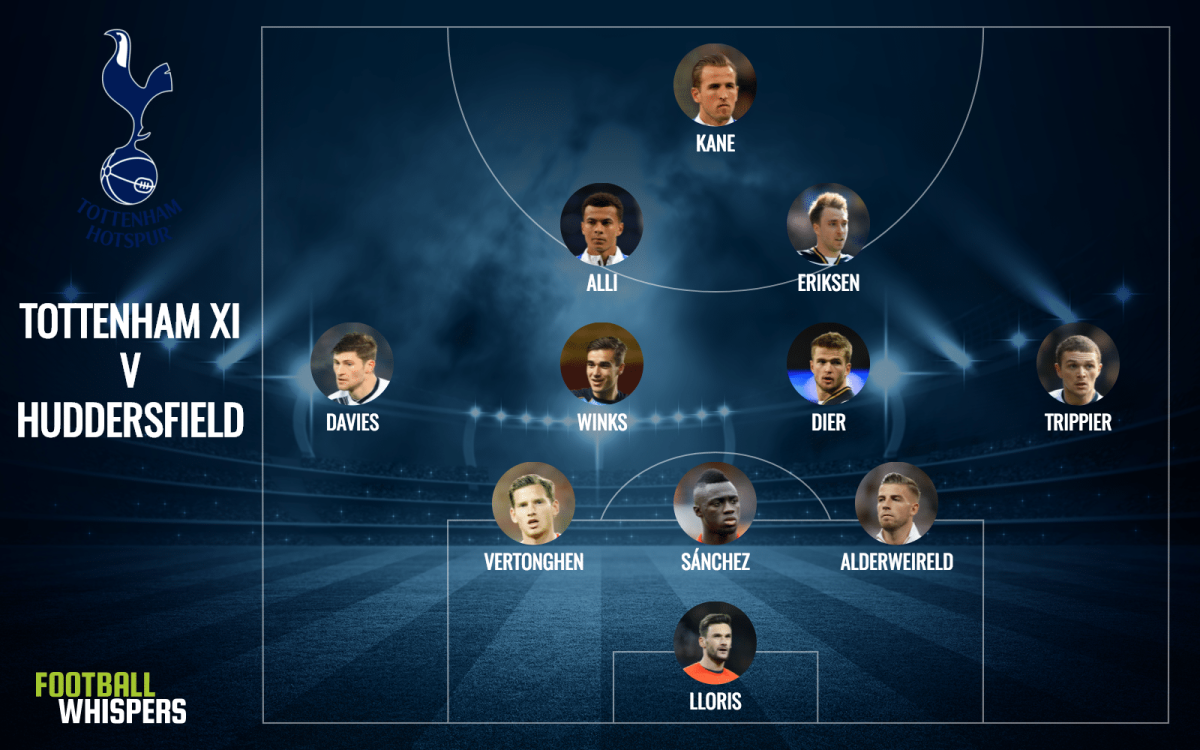 The Frenchman had a quiet afternoon between the sticks for Spurs, making one save of note in the first half to deny Smith a rasping left-footed strike.

If any member of Tottenham's back three was troubled it was the Belgian. He was at sixes and sevens for Huddersfield's only real chance, allowing Depoitre to stride forward and thump a shot off the crossbar. But that was the only blot on his copybook.

The club-record signing continues to impress but enjoyed a quiet day at the heart of Tottenham's defence with lone striker Depoitre marshalled out the game with ease. Sánchez won three of the four tackles he attempted and two aerial duels.

The former Ajax man is Mr Consistent. Good on the ball and an impressive reader of the game, he built from the back and never looked flustered by Huddersfield's meagre threat.

Starting in place of the suspended Serge Aurier, Trippier made Tottenham's opener with a hopeful header to clear the danger and had a hand in the slick passing move which preceded the visitors' second too.

A constant attacking threat down the right-hand flank, he created three chances, supplied three crosses and two assists in the first-half alone. Trippier now has more assists (8) to his name than any other top-flight defender in 2017.

And Trippier was also alert defensively, helping nullify the threat of Ince and van la Parra down the left.

With Moussa Sissoko and Mousa Dembélé missing it was the former Manchester United transfer target who was the senior head in midfield. Dier will certainly endure tougher games than this but did the necessary alongside youngster Winks without breaking sweat.

He won three of the four tackles he attempted and was responsible for helping shackle Huddersfield playmaker Mooy whose impact was severely restricted.

Starting his first Premier League game since April, when his season was ended with an ankle injury against Burnley, Winks was neat and tidy in possession, collecting the ball off the back four and playing forward whenever possible.

He finished with the highest pass completion of any player to start, connecting with 86 per cent of the 59 passes he attempted.

With Manchester United transfer target Danny Rose ruled out at the start of the season Spurs fans would have been forgiven for feeling their left-hand side was not as strong as it could have been.

But Davies' performances suggest there will be life after Rose. And the Welshman continued in that vein at the John Smith's Stadium.

His finish for Tottenham's second was neat, striding onto Eriksen's accidental lay-up and slotting past Lössl. The really impressive part, though, was that he had got so high up the field in the first place that he was perfectly positioned to fire home on the run.

In his last nine Premier League appearances, Davies has been involved in six goals for Spurs – scoring three and making three.

The Real Madrid transfer target had not really stamped his mark on the game when he helped create the North Londoners' second. With Schindler all over him he flicked the ball around the corner for Eriksen who saw the hapless Löwe stab the ball into Davies' path.

Alli glided across the pitch throughout; back to front, left to right, creating space for his team-mates and options for the ball carrier. Less impressive was his dive in the second half – attempting to go down as Lössl scooped the ball up – which rightly earned him a booking. It was his second booking for simulation since the 2015/16 season. Only Wilfried Zaha (3) has more cautions for the same offence.

Spurs boss Pochettino has been effusive in his praise of Eriksen this week and the Danish string-puller was up to his usual tricks at the John Smith's Stadium, drifting between the lines, pulling players out of place and wreaking havoc.

Eriksen might not get the assist for Tottenham's second – he wanted slightly too long on the ball and was fortunate to see it break for Davies – but he was at the centre of everything good for the visitors.

How long before Barcelona or Real Madrid are linked?

August isn't Kane's month – we know that much. But September most definitely is. The England international had already fired off a warning shot in the early moments before opening the scoring when the hosts gifted him a clear sight of Lössl's net.

After that Kane clearly had the taste for blood. He showed all his aggression and work-rate to rob Terriers keeper Lössl of possession when he took a touch too many inside the box but should have got his head up to find Eriksen.

That was merely a warning. The hitman added a devastating second after 23 minutes, thrashing past Lössl into the top corner with a laser-guided left-footed effort from the edge of the area.

That took his September tally to 13 – the best monthly haul of his career and as many as Cristiano Ronaldo and Lionel Messi have managed in a month.

When he was replaced near full time he received a standing ovation from the entire stadium – a fitting acknowledgement of quite how good he is.

The French midfielder got his first Premier League goal for Spurs at the death, collecting a cross from the left and bundling home from close range.