Whenever Real Madrid are mentioned, an array of attackers spring to mind. Los Blancos are famous for their Galácticos and those individuals, with the exception of a few, usually operated in the final third of the pitch.

Raúl, the original Ronaldo, Robinho, Cristiano Ronaldo, Gareth Bale, Karim Benzema. The list is impressive. Zinedine Zidane added the latest Galáctico, Eden Hazard, to his ranks during the summer along with starlets Rodrygo and Luka Jović.

When looking at the Frenchman’s squad, it is easy to become fixated on the attackers they have at their disposal. Bale remains a Real Madrid player, Isco and Marco Asensio are still vying for a starting berth while James Rodríguez returned from his loan spell with

Yet 23 games into the LaLiga season, Los Blancos are averaging just 1.9 goals per 90. For context, Barcelona average 2.39. Zidane’s side are still the second-highest scoring team in the Spanish top-flight but 11 goals separate them from their Catalan rivals, and Barça have been struggling this term.

However, the 1.9 they’re managing now is up on the 1.67 they averaged last season. But this Real Madrid side is far removed from the one which contained Cristiano Ronaldo. During his final campaign in Madrid, Los Merengues scored 94 goals in LaLiga at a rate of 2.47 per 90. 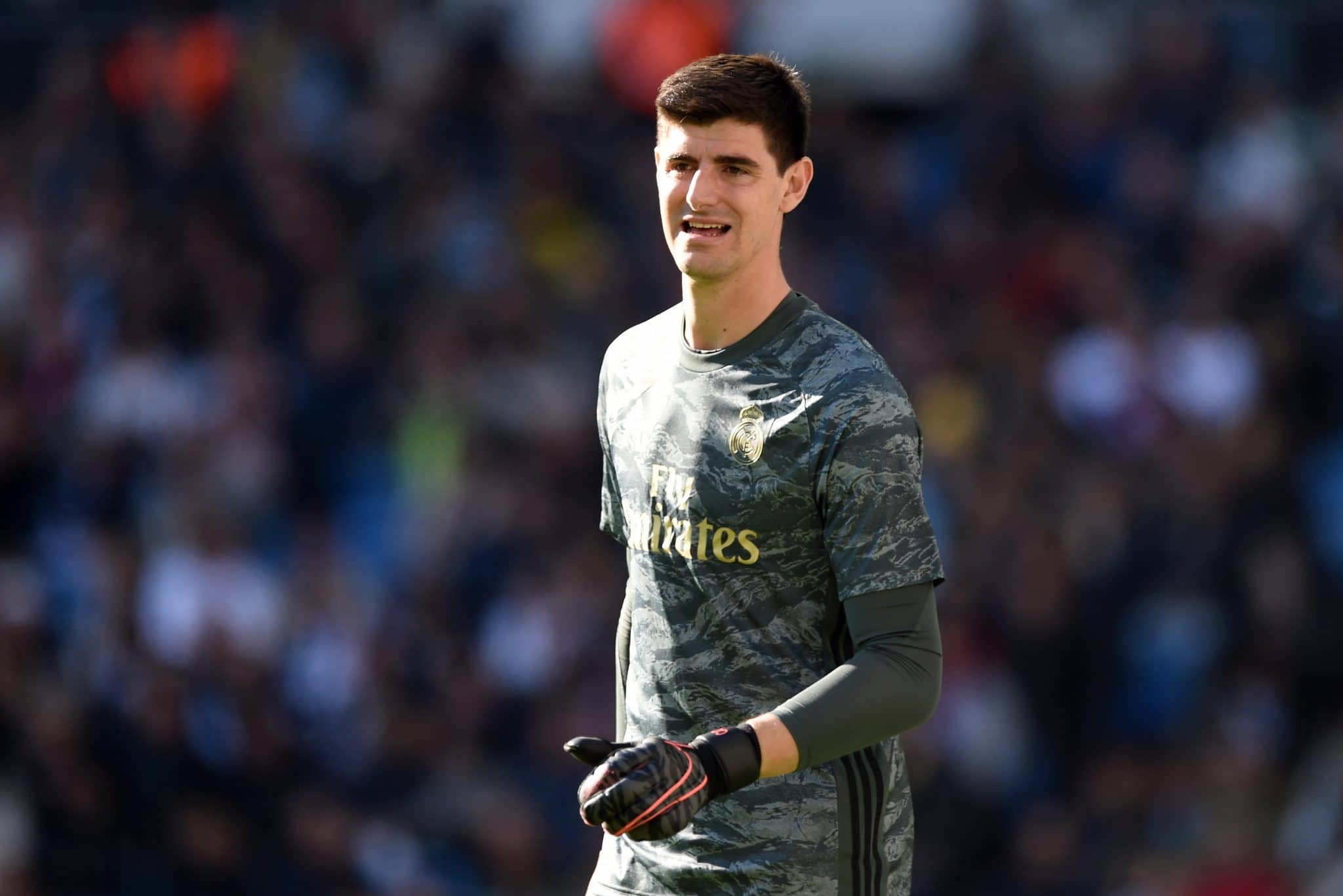 The lack of goals, by comparison, means what Zidane’s team is doing right now is going under the radar.

They’re three points clear at the top of the table and, remarkably, have the best defensive record in the league. Yes, Real have conceded fewer goals than Diego Simeone’s famous Atlético Madrid machine.

Zidane’s side have been breached on just 14 occasions this term, a rate of 0.61 per 90. Barcelona are conceding 1.21 per 90 and every other team, apart from Atleti and Athletic Club, have conceded more than 20 goals so far.

It’s a significant improvement on the 1.21 goals Real conceded per 90 last season and the 1.15 they shipped during 2017/18. Zidane has transformed his team and he’s done it under the radar.

Real Madrid went from having the ideal environment for Ronaldo to rival Lionel Messi to giving Thibaut Courtois an opportunity to wrestle the Zamora Trophy from Jan Oblak's grasp after winning it in each of the last four seasons.

In fact, the last time a Real Madrid keeper won the award – given to the keeper who has the lowest goals-to-games ratio – was in 2006/07 when Íker Casillas claimed it. Since then, Atleti keepers have won it on six occasions and Barcelona’s No.1s have been awarded it five times.

At the time of writing, Courtois, January's Player of the Month, is conceding 0.55 goals per 90. The big Belgian is back to his best after a disappointing maiden campaign with Real Madrid and was instrumental in the club's Super Cup victory.

Zidane's men needed penalties to defeat neighbours Atleti but the match only reached that stage because of the exploits of their No.13. Courtois thwarted his former team on a number of occasions, five to be exact during normal play, before saving two efforts in the shootout.

The former Chelsea man has been arguably Real Madrid's Player of the Season, too. A stark contrast to last season when his place at the club appeared to be under some threat.

However, the dramatic turnaround in fortunes isn't solely down to the 6ft 5in shot-stopper. Zidane's defence is a lot more resilient this season and they protect their goalkeeper. 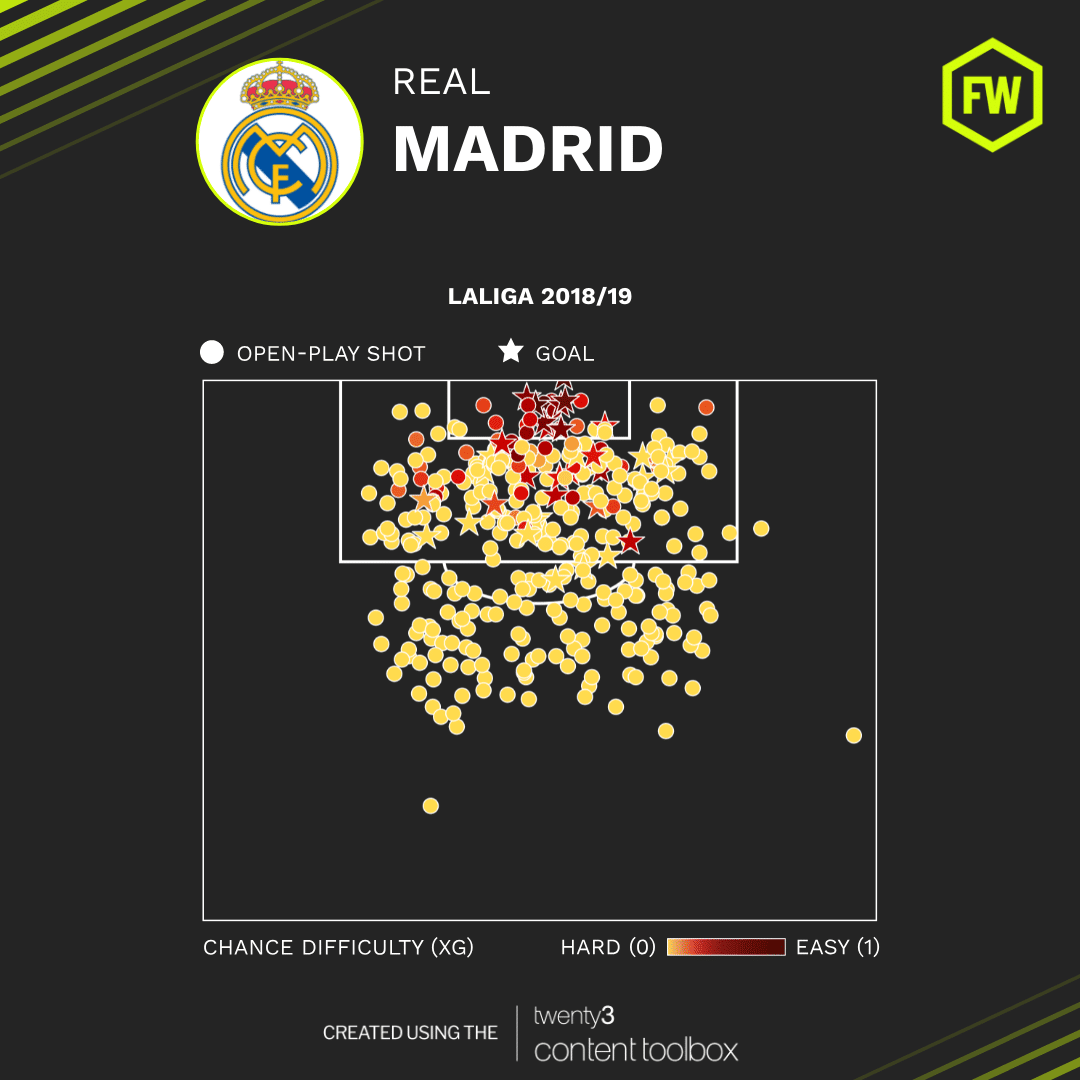 The shot map above is for Real Madrid last season. It shows all open-play efforts they faced and those in red are deemed easier and have a higher expected goals value. As you can see, the 13-time champions of Europe conceded an awful lot of shots from inside their six-yard box.

The latter stat assigns a value for where the shot was taken and where it lands on target. By comparing this to actual goals conceded you're able to see which keepers performed better than they should have.

Real Madrid's average of 1.12 shows they gave up a number of good chances but conceded 1.21 goals in open-play, meaning the keepers used by Los Blancos underperformed. While 0.09 doesn't seem like a big difference, over a 38-game season it's 3.5 goals. That is enough to turn three wins into three draws – a six-point swing. 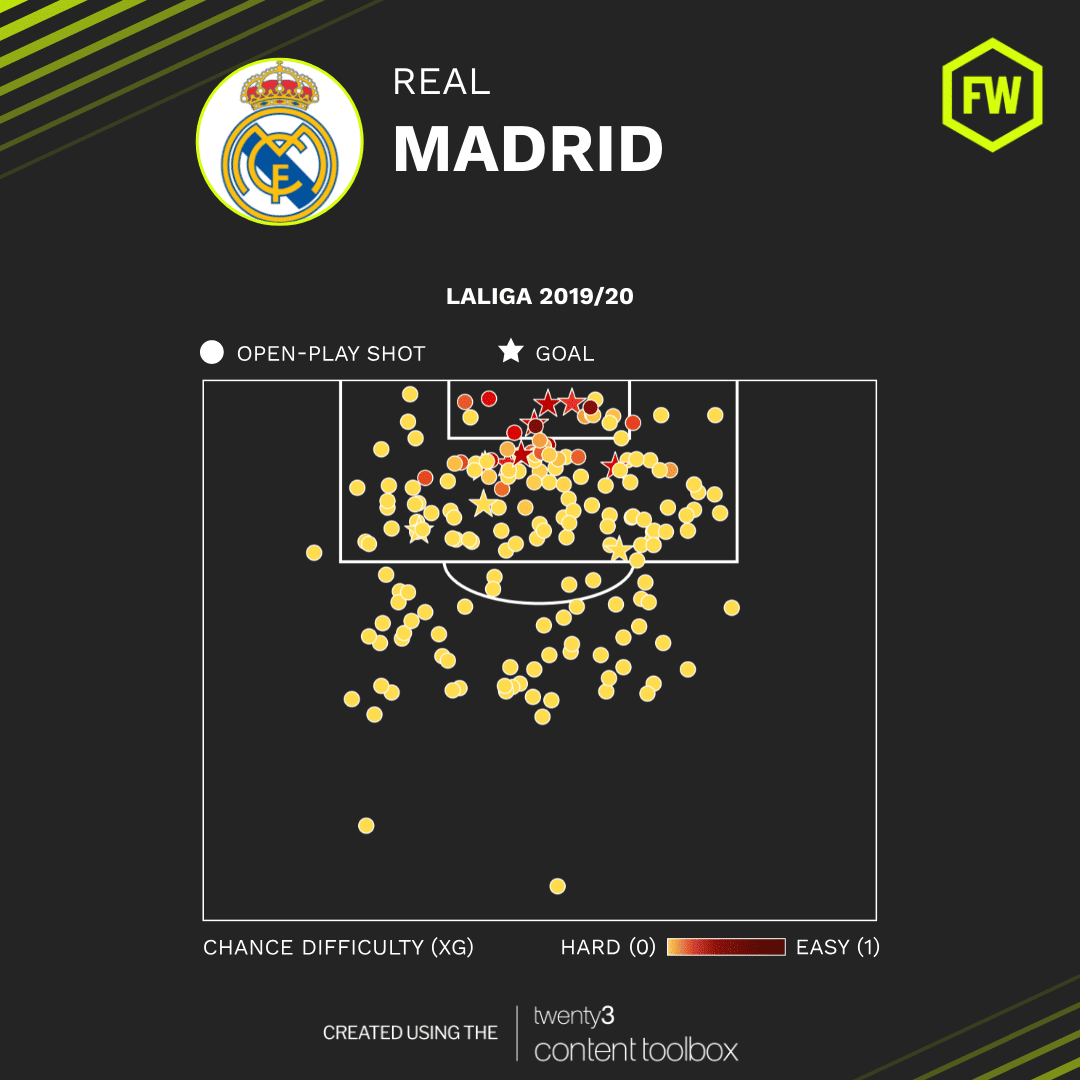 This season, Real Madrid are stopping their opponents before they get into the six-yard box. There are still some shots coming from there, as shown above, but not the same volume as last term.

Furthermore, the post-shot expected goals of 0.7 per 90 is higher than the goals conceded an average of 0.61. This time around the 0.09 difference is in Madrid's favour meaning the potential draws are now being turned into wins due to the exploits of their goalkeepers, namely Courtois. Without the Belgian between the sticks, Real Madrid lost 4-3 to Real Sociedad in the Copa del Rey last week.

The improvement is a combination of superb goalkeeping and adopting a system which prevents the opposition from getting deep into the penalty area on a regular basis.

Zidane deserves a lot of credit for making Madrid so difficult to break down. This team might not be the easiest on the eye but they're on course to win their first LaLiga title since 2017 and only their second since 2012.