There are certain transfers that have a sense of inevitability to them: Cristiano Ronaldo to Real Madrid was one, Cesc Fàbregas to Barcelona was another. Philippe Coutinho to Barcelona may not be quite as inexorable as those two but, should Liverpool’s Brazilian playmaker continue to produce headline-grabbing performances at Anfield, a departure to Barcelona will likely become a case of when rather than if (even if it doesn’t come to fruition this summer).

Coutinho appears to be the right package for the Blaugrana. He’s a fleet-footed Brazilian, which always helps, but he also possesses the natural ability and penchant for the spectacular that could turn him into a Camp Nou favourite.

At his best, Coutinho is a slick, dynamic presence in the final third, constantly looking for intricate one-twos (Lionel Messi and co aren’t bad at those), while the thought of curling a superb right-footed effort into the top-corner is never far from his thoughts. However, with a Barcelona attack already dripping with world-class attacking talent, where would the precocious 24-year-old fit in? Let’s take a look.

Even a player of Coutinho’s quality would have to temper expectations of his role at Barcelona. Unless he experiences a spectacular surge in goal-scoring form, he would not upset the current MSN trident of Messi, Luis Suarez and Neymar, even with the latter’s indifferent form this season.

With Barcelona regularly deploying a 4-3-3, Coutinho would likely be used in midfield, perhaps on the left of a trio which predominantly features Sergio Busquets in the middle and Ivan Rakitic to his right. Andrés Iniesta has often been used on the left of that midfield three but the club’s legendary creator-in-chief is 33 so it’s understandable that they would be preparing for life without him. 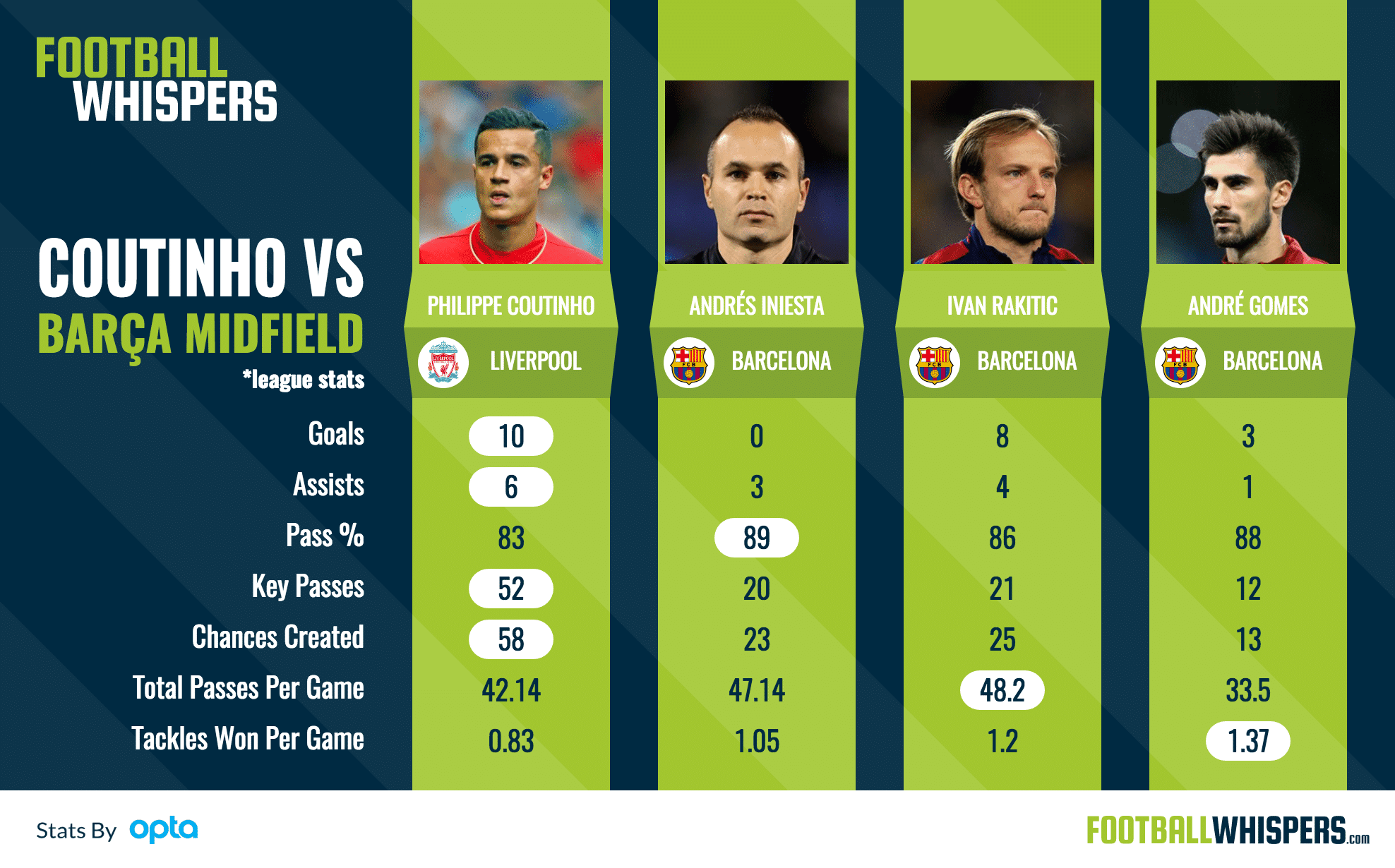 Coutinho’s excellent form for much of this season sees him stack up strongly against Barcelona’s current midfielders. Barca’s quick-passing philosophy requires their midfielders to be fast-thinking and technically sound – two attributes they will find in Coutinho. With 52 key passes this season, Coutinho towers above Iniesta (20), André Gomes (12) and Ivan Rakitic (21), marking him out as a player constantly minded to drive attacks forward and create chances for his teammates.

Indeed, Coutinho has created 58 chances for Liverpool this season, more than doubling the returns of Rakitic (25) and Iniesta (23), which has seen him notch six assists. The stats show that Coutinho averages two chances created per game and, with three of the game’s most accomplished finishers spearheading their attack, you can see why Barca would covet Coutinho’s craft and guile.

He is not a rounded midfielder – yet

Of course, it’s never that simple. Coutinho would undoubtedly bring a creative spark to Barcelona, but playing in midfield would mean a radically different role to his one at Liverpool. Jürgen Klopp uses Coutinho as part of a front three, usually in a 4-3-3 but, as discussed, he’s unlikely to play such a role for the Catalan giants.

Switching to a focus on defensive competencies, Coutinho stands out for a different reason. Operating in a deeper role naturally brings with it a defensive remit, something Coutinho has not always fulfilled with ease. Coutinho averages 0.83 tackles won per game, paling in comparison to Busquets (1.68), Gomes (1.37), Rakitic (1.20) and Iniesta (1.05).

His pass completion rate is also lower than the Barca quartet at 83 per cent, thus heightening the risk of playing the Brazilian in a midfield trio. Coutinho can be a weapon with the ball, but can also go missing without it. Barcelona have averaged 62 per cent possession this season but that doesn’t mean Coutinho would be free to neglect his defensive duties.

Playing Coutinho deeper brings with it a certain risk. Hypothetically, playing Coutinho, Rakitic and Busquets as a central trio may expose Barcelona, with Coutinho’s natural tendency to play out wide and run beyond defenders. That would essentially leave space in midfield, leaving Barca vulnerable to a counter-attack.

It remains to be seen who will succeed Luis Enrique in the Camp Nou dugout. One of the frontrunners is Juan Carlos Unzué, Enrique’s current assistant, who is very well thought of at the club. In fact, Enrique often delegates tactical instructions to Unzué, which means that he is astute in that regard and may be willing to alter the system, should he be appointed.

Earlier this season, Enrique deployed a 3-3-1-3 formation to devastating effect in the historic comeback victory over Paris Saint-Germain in the Champions League and, even though Juventus exposed its vulnerabilities, it could come back into fashion at Barca next season.

Such a set-up may suit Coutinho, too, as the Brazilian could fill the wide right midfielder slot in which we saw Rafinha. The role’s purpose is to create space for Messi while offering an outlet out wide. With Coutinho’s pace, dribbling and willingness to cut in, it seems like a role suited to his talents.

Crucially, though, the role requires the player to often tuck in and stabilise the midfield. It’s a position that demands maximum focus, running and positional discipline, so perhaps deploying Coutinho there would be a risk. 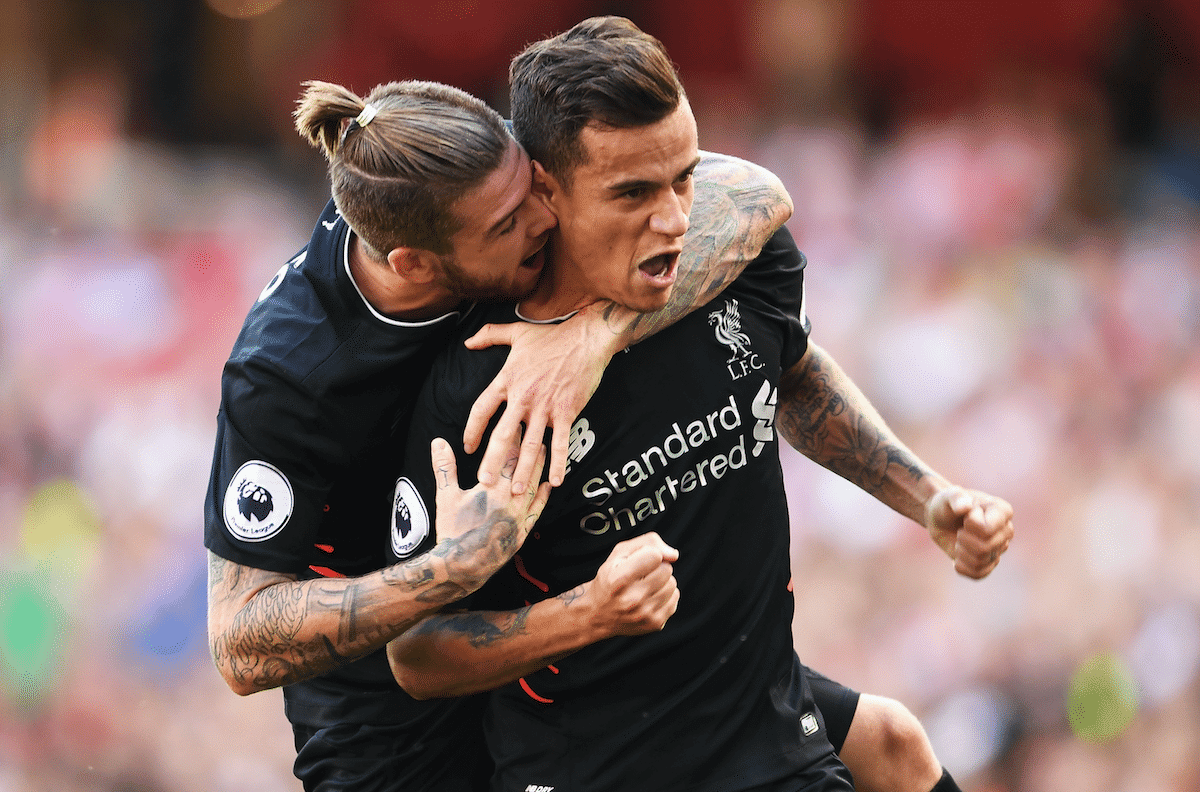 That is not to discredit Coutinho’s defensive usefulness entirely. With 24 tackles won in total this season, the Brazilian is clearly willing to go against instinct and fulfil his defensive duties.

It’s fair to say that Coutinho has developed under Klopp. The German’s intensive training sessions and demands have increased the player’s fitness and inclination to track back and help his team defensively. When Coutinho has failed to do so, Klopp has been seen gesticulating wildly on the touchline. Such an education has rounded and matured Coutinho, but he still has work to do (which is acceptable seeing that he is still only 24).

Another Barca blow for Liverpool

Whatever way you look at it, losing Coutinho to Barcelona would be a crashing blow for Liverpool, one that would dredge up haunting memories of watching Suarez depart in 2014 and elevate his game further alongside Messi and Neymar. Although Coutinho has not produced a remarkable goal-scoring haul à la Suarez at Anfield, his ingenuity and invention are central to Klopp’s vision for the club’s future.

Of course, if Coutinho wants to go and Barcelona make an offer, it may be difficult to stop him. If he does follow the path paved by Suarez, it would offer the opportunity to cement his status as one of the game’s most exciting attackers.
His creative powers mean he would be an exciting addition for Barca but finding a place for him would be the main issue.

Neymar appears to be the most likely of the MSN trio to be dropped, given his underwhelming form at times this season, and were Coutinho to join and usurp his compatriot in the starting line-up, that would perhaps generate tension in their close friendship especially seeing that he would be the first man to embrace Coutinho after signing.

Expect there to be intense speculation over Coutinho’s future this summer, especially if the club misses out on Champions League football. At 24, there’s plenty of time for Coutinho to grow into a Barca-worthy player. The transfer is likely to happen at some point down the line, as painful as that is for Liverpool fans to admit.