Chelsea have undoubtedly been the Premier League’s best team this season. With 13 fixtures left to play, they possess an eight-point lead at the top of the table having dropped just 15 out of a possible 75 points thus far.

Antonio Conte’s side are on course for the title, though they will have to wait to test their mettle against Europe’s finest. Due to their 10th-place finish in 2015-16, they have been absent from this term’s Champions League.

Here, Football Whispers analyses how Chelsea would fare against five of the top teams on the continent in Atletico Madrid, Barcelona, Bayern Munich, Juventus and Real Madrid. 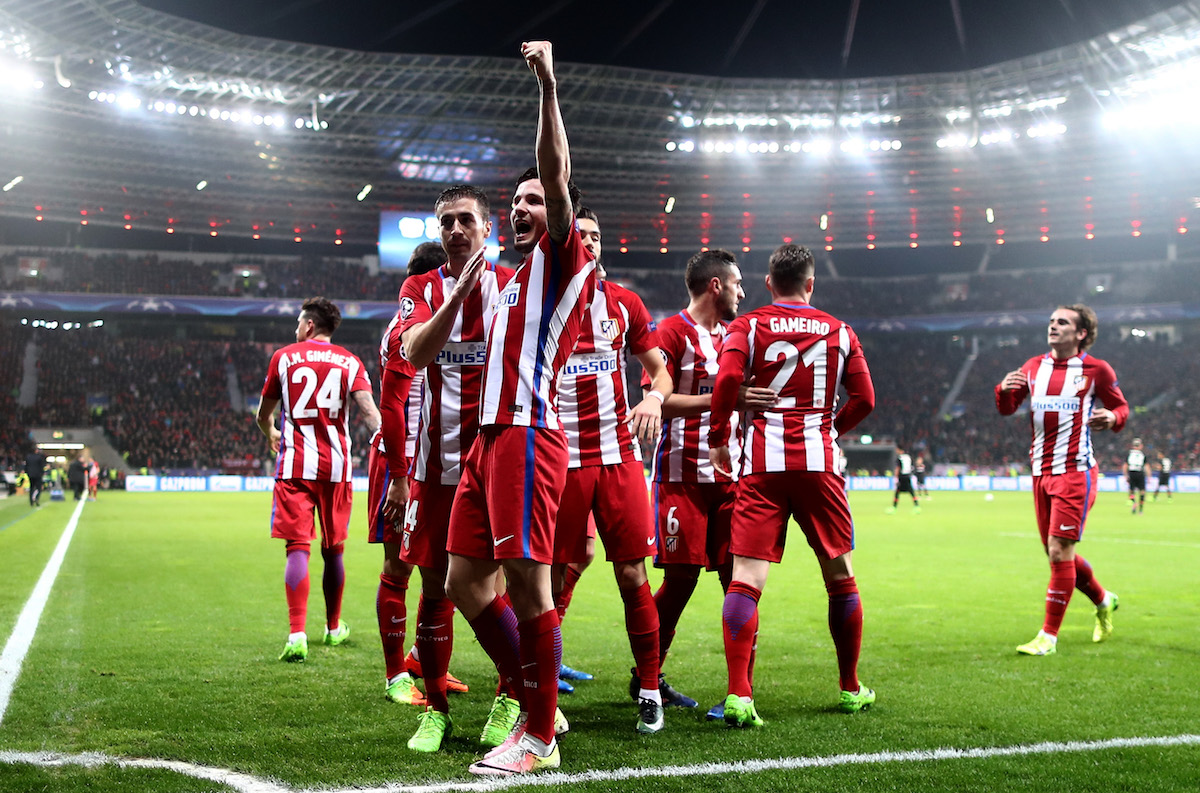 Diego Simeone’s Atletico have been one of the most resolute defensive sides in Europe for several years. Their solidity has been on show once again this season despite a disappointing league campaign, with only Villarreal conceding fewer goals in La Liga than Los Colchoneros’ 19.

Their tight-knit position-based defence and high levels of compactness between the lines make it difficult for even the most precise of passers to break through, while their efficiency on the counter-attack is renowned.

Conte’s side would be able to bypass Atletico’s first press, however penetrating the midfield and defensive line would prove a step too far. Against a deep back line and with space congested, Chelsea’s best chance of scoring would be in attacking transitions, where their quick interchanges could disrupt the Spanish side’s setup.

Considering Chelsea’s 5-4-1 defensive structure and the fact that, in Europe’s top five leagues, only Bayern Munich, Villarreal, Juventus and Paris Saint-Germain have conceded fewer per game, the likelihood in this match would be a draw. 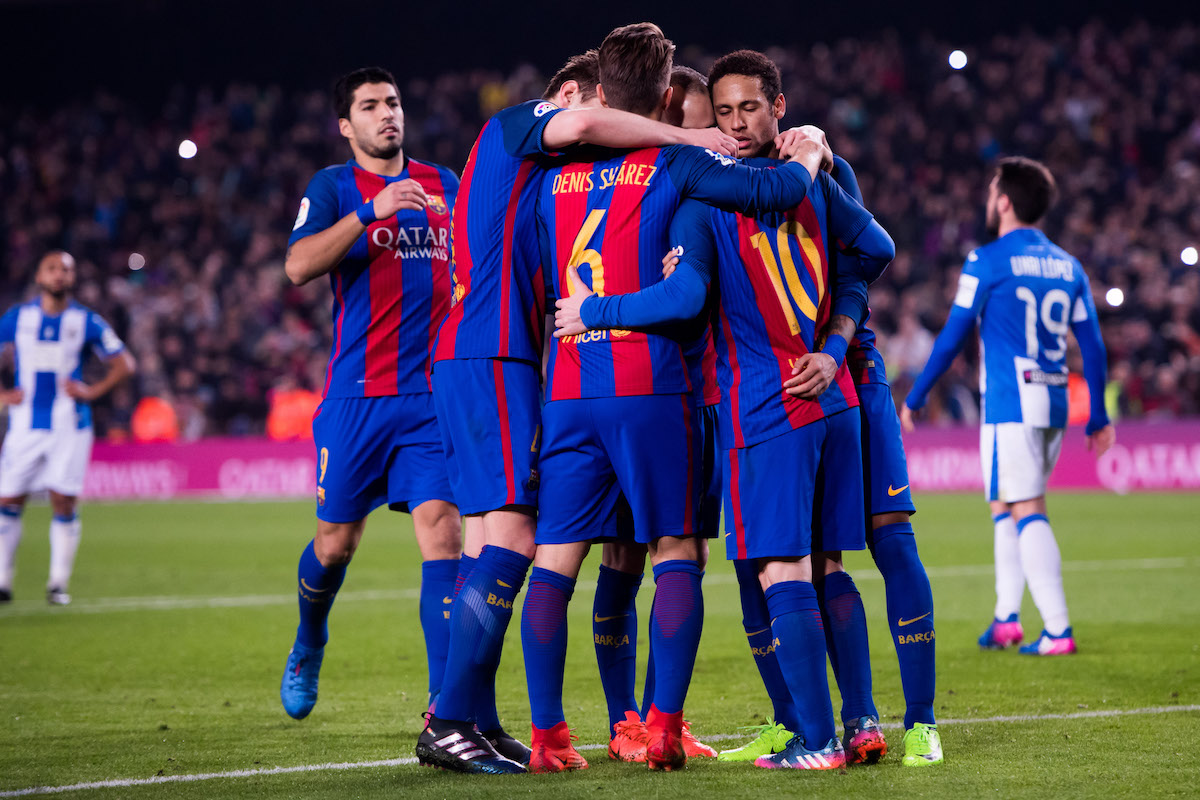 Barcelona have looked out of sorts at times this season, and their recent 4-0 defeat to Paris Saint-Germain in the Champions League second round was one of the Catalan giants’ worst performances in recent decades. However, form is temporary, and they remain one of the most potent sides in the world.

Taking into account the top five European leagues, only Monaco have scored more goals per game than Barcelona’s 2.74. This is due primarily to a skilful, explosive and clinical front three of Lionel Messi, Luis Suarez and Neymar that, on their day, is simply unplayable.

Under Luis Enrique, Barcelona have taken a more transition-based approach, placing greater emphasis on counter-attacks and getting the ball to the aforementioned attacking trident as quickly as possible following turnovers in possession. In order to combat this and prevent one-on-one situations with Cesar Azpilicueta, David Luiz and Gary Cahill that would leave them exposed, Chelsea would have to take up a defensive stance in this game.

However, while occasionally threatening on the counter-attack – particularly with Eden Hazard and Marcos Alonso up against Sergi Roberto – Conte’s back three would gradually be dragged out of position and overwhelmed by the sheer pace and skill in Barcelona’s attack. 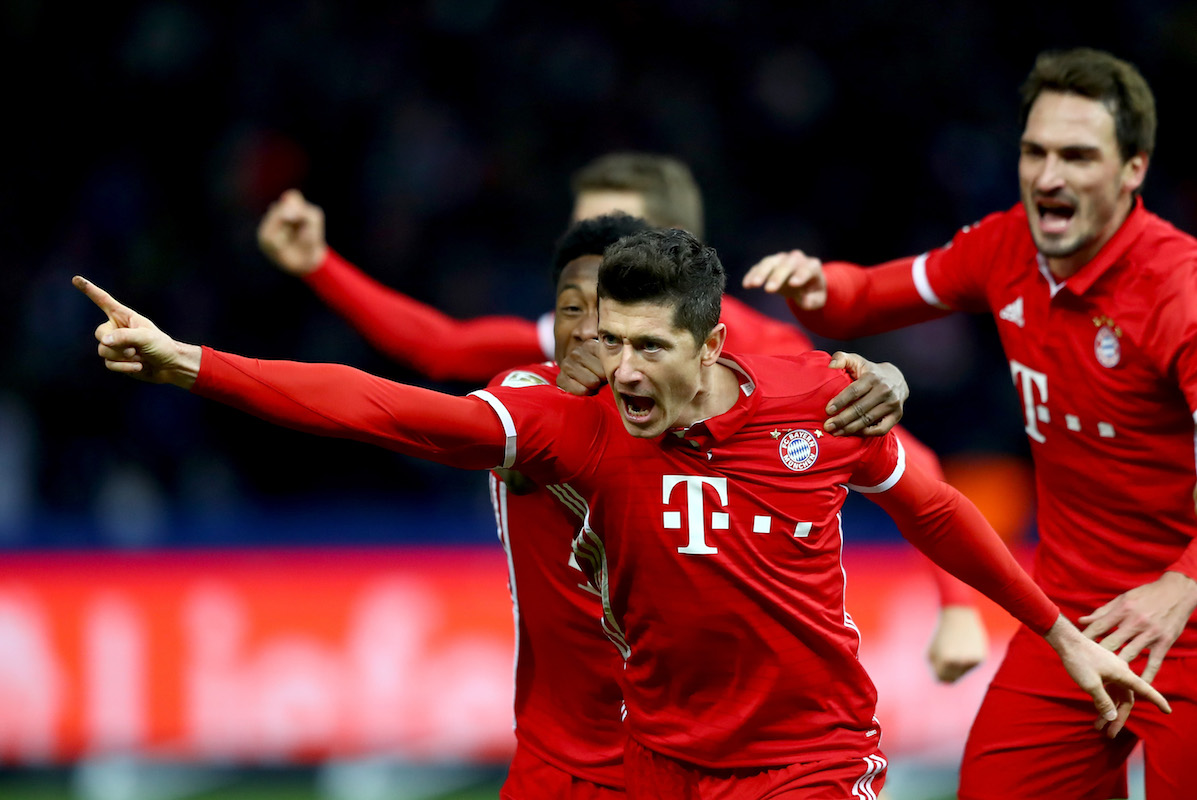 Unsurprisingly, Bayern Munich have become a more pragmatic and predictable force since Pep Guardiola left for Manchester City. His replacement in the dugout, Carlo Ancelotti, is seen more as a master man-manager than a visionary tactician, with a propensity for getting the best out of multiple stars within a team.

Nonetheless, Ancelotti’s ability to keep things ticking along has seen Bayern hold off the threat of RB Leipzig to top the German Bundesliga by five points, and their 5-1 destruction of Arsenal in the Champions League was a striking reminder of their attacking qualities.

However, this season has seen them struggle to break down negative opposition, something that could cause problems against the current Chelsea side, who have shown themselves to be a compact and cohesive defensive unit.

Conte’s side would hold Bayern at bay for a period, though eventually their resistance would be broken by the penetrative passing of Thiago and Xabi Alonso, as well as the speed and ghosting movements of Arjen Robben, Robert Lewandowski and Thomas Muller. 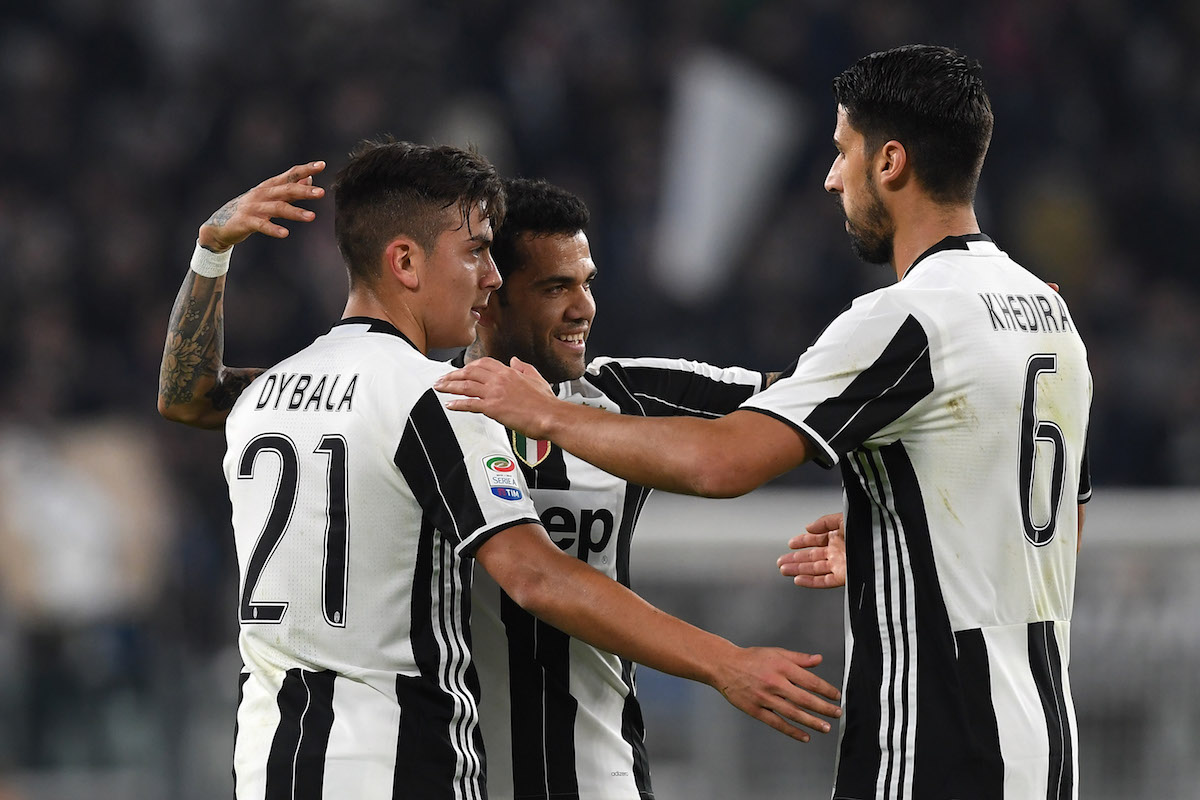 Chelsea versus Juventus would pit Conte up against his former club in what would prove to be an intriguing tactical battle.

Juventus have continued to dominate Italian football since Conte left, with Massimiliano Allegri gradually refining and reworking the team in his own image. Over the last three years, he has implemented a variety of new systems while introducing a slightly slower playing style built on pragmatic possession in attack and position-based defence.

Difficult to dispossess and even harder to break down, the Bianconeri are one of the most capable sides in Europe when it comes to suffocating the opposition. However, they are also able to press high when necessary, and in their new-look 4-2-3-1 formation they would disrupt Chelsea’s build-up.

The movement of Paulo Dybala would be a real threat to Conte’s side, with the Argentine dropping deep to pose questions to Luiz and Cahill, who would have to decide whether to follow him or remain in the line. They would probably opt for the latter option, though this would only give the attacker extra time and space to exploit.

Unable to progress the ball effectively from the back, Chelsea would struggle to string passes together and build attacks. Subsequently, they would be unlikely to score and, up against the movement and finishing of Dybala and Gonzalo Higuain, a clean sheet is equally hard to envisage. 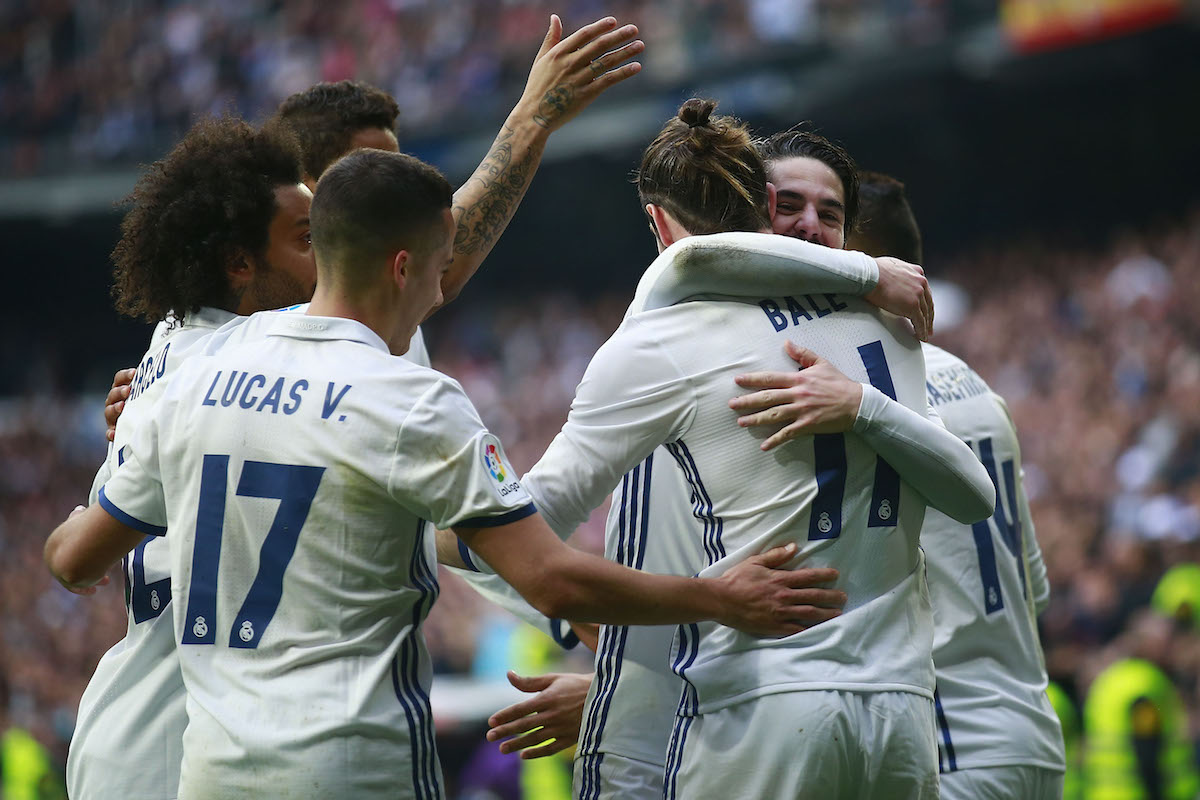 Under Zinedine Zidane’s auspices, Real Madrid have become decidedly better in the defensive phase. Where previously they relied almost solely on their individual attacking talent, they are now an organised defensive unit with the capacity to shut down the smoothest of possession games.

The central midfield three of Luka Modric, Toni Kroos and Casemiro is crucial in this respect. The former two occupy and block passes into the half-spaces (the areas between the centre of the pitch and the two wings), while the latter operates slightly deeper, covering, intercepting, sweeping and supporting.

With plenty of pace on the break coming from left-back Marcelo and wide men Cristiano Ronaldo and Gareth Bale, Zidane’s side also offer a real threat on the counter-attack. However, they are themselves susceptible in such situations.

The power, directness and movement of Diego Costa would unsettle Madrid’s centre-back partnership of Raphael Varane and Sergio Ramos, and the blind-side movement of Pedro and Hazard behind Madrid’s midfield trio would cause other issues, allowing Chelsea to sneak a draw.