The kings of the free transfer, Juventus have been at it again this summer with the signings of Aaron Ramsey and Adrien Rabiot.

Persistently linked with a deal to bring Paul Pogba back to Turin too, new coach Maurizio Sarri will have some of the most enviable midfield options in European football at his disposal this season.

It's been 23 years since the Bianconeri last lifted club football's biggest prize, the Champions League. Signing the competition's all-time leading scorer and era-defining superstar Cristiano Ronaldo wasn't enough to end the drought, so Juve have gone bigger still this summer.

If reports are to be believed, they are far from done yet. The names of Manchester United enigma Pogba, Internazionale bad-boy Mauro Icardi and Fiorentina prospect Federico Chiesa have been thrown around most frequently while a deal for the brightest defensive prospect in Europe, Matthijs de Ligt, is a formality expected to be completed in the coming days.

Naturally, the Old Lady will have to offset this spending against some player sales – Gonzalo Higuaín, Mario Mandžukić, Paulo Dybala, Juan Cuadrado, Douglas Costa, João Cancelo and Leonardo Bonucci have all been linked with moves away – but they have the look of a fearsome proposition.

The question, then, is how on earth they fit their extraordinarily talented group of midfielders together. We're going to be working on the basis that, per reports in the Italian press, Matuidi and Khedira will be the unfortunate casualties of this remarkable recruitment drive.

One thing we do know is new coach Sarri does not compromise. He will use a 4-3-3 system with a deep-lying playmaker at the base of midfield to conduct the play. That is an inescapable reality for Juventus and considering alternatives is a waste of time.

Option 1: Give Ramsey licence to roam 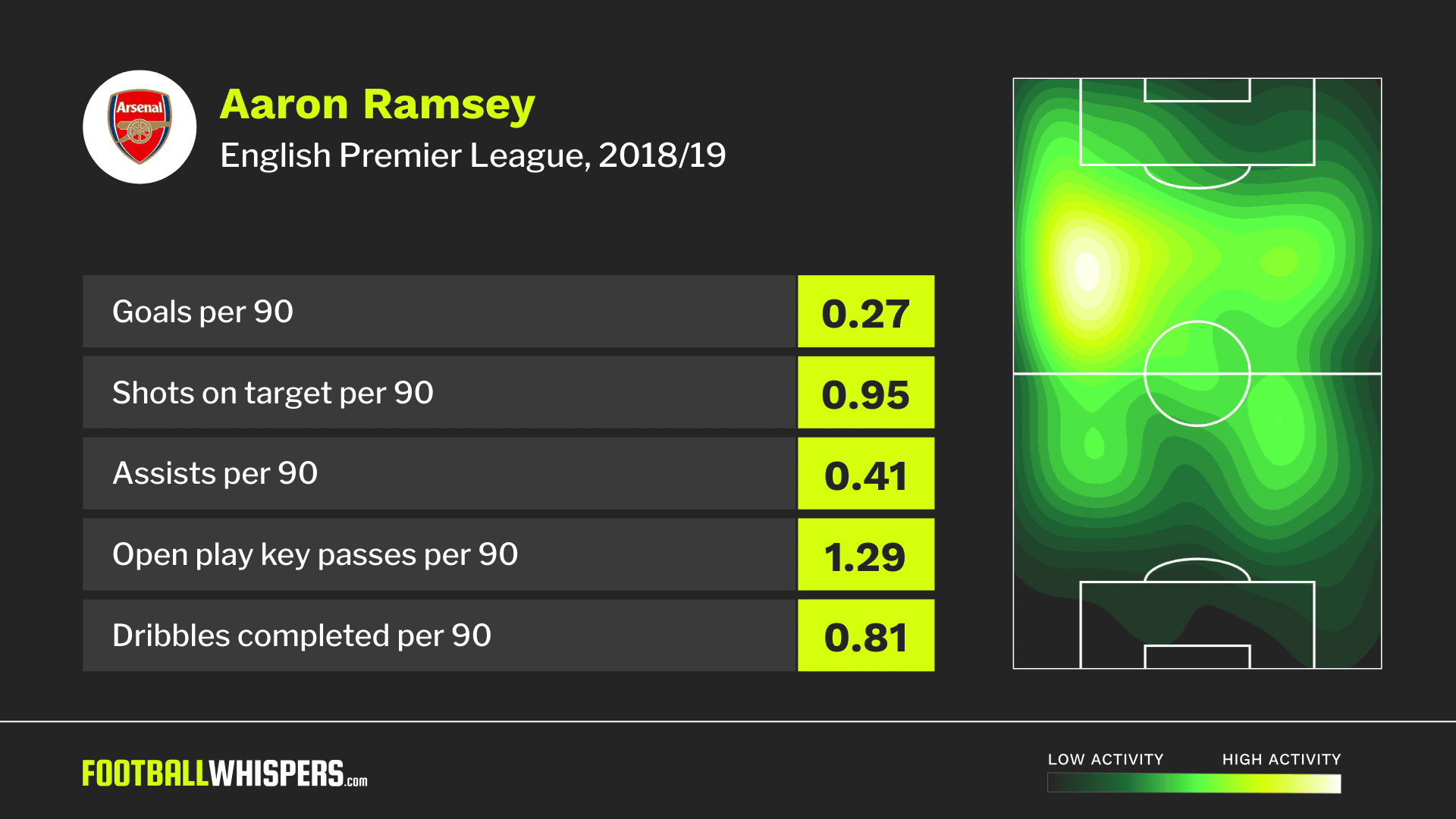 With Ramsey and Rabiot already fully-fledged Juve players, not a lot needs to change on the face of it. Pjanić, as the most Jorginho-like midfielder at the Allianz Stadium, sits at the base of midfield dictating proceedings with Rabiot to his left and Ramsey to his right.

Ramsey's best football for Arsenal came when he was allowed the freedom to get into the penalty area and score goals. He is an eight-and-a-half, given licence to break free and dart into pockets of space, much like Chelsea legend Frank Lampard in his prime.

With Rabiot and Pjanić behind him, the Welshman would have the security to do just that. Over the last three seasons, Ramsey ranks ninth among Premier League midfielders for shots per 90 with 2.67. His 12 goals are just shy of the 14.67 he would have been expected to get according to Football Whispers' xG model.

While not a No.10 in the truest sense of the role, Ramsey displayed creativity too, racking up 18 assists – only one of which was not from open play – at a rate of 0.36 per 90, the third-highest return among Premier League midfielders.

Option 2: Rabiot as the midfield pivot

The signing of Ramsey had long been expected. The former Cardiff City youngster fell out of favour in the early days of Unai Emery's Arsenal reign and that was the beginning of the end for the popular No.8 whose move was finally confirmed earlier this year after persistent speculation.

However, the capture of Rabiot was rather more sudden and, you suspect, something of a bonus that even Juventus had not planned for. The rangy Frenchman's reported options had included Barcelona and Manchester United.

With that in mind, it's not so easy to see where the former PSG man fits in – especially if Pogba signs. One option could be in place of Pjanić as the midfield pivot. At 29, the Bosnian maestro is no spring chicken. 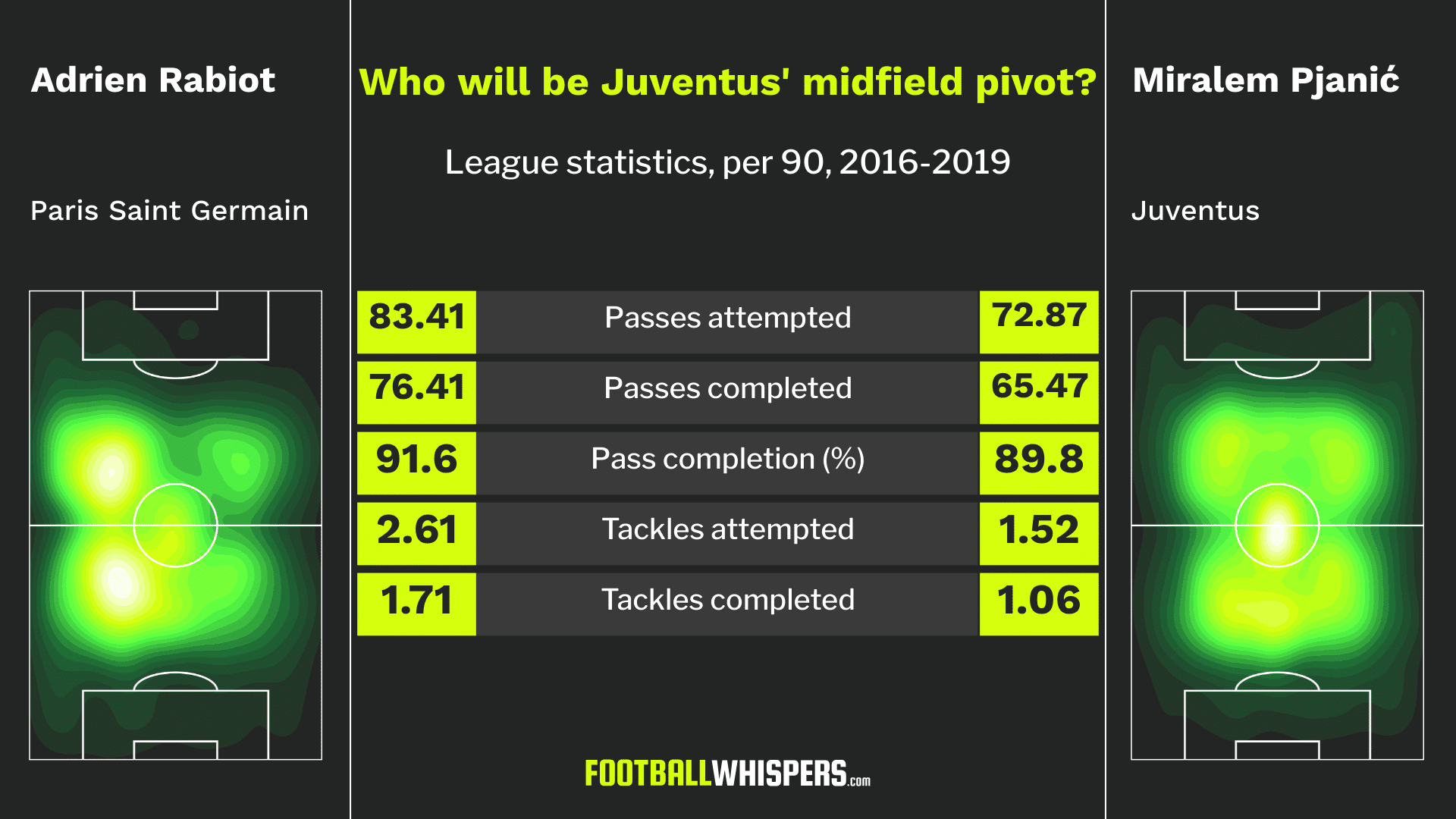 Comparing the two statistically over the last three seasons, it is interesting to note that Rabiot attempts and completes more passes and tackles than his new teammate.

While both have been playing for the dominant team in their respective leagues, Ligue 1 is broadly perceived to be a weaker overall standard, which could have some bearing on those numbers.

The fascination with the Manchester United maverick appears to extend to clubs, fans and pundits alike. Having failed to hit the heights expected of him following his world-record move from Juventus to United in 2016, Pogba looks set for the Old Trafford exit for a second time this summer.

Despite flattering to deceive in the Premier League, the 26-year-old is not short of suitors and Juventus look to be near the head of the queue. He did, after all, show his undoubted talent in the weeks following José Mourinho's sacking before reverting to the underwhelming mean which has comprised his second spell in England.

As every armchair pundit knows, the World Cup winner famously enjoyed the best spell of his career in Turin on the left of a midfield three – the seven words which have blighted Pogba's United career.

As the heatmap below highlights, he's done most of his work for the Red Devils over the last three years in that area. 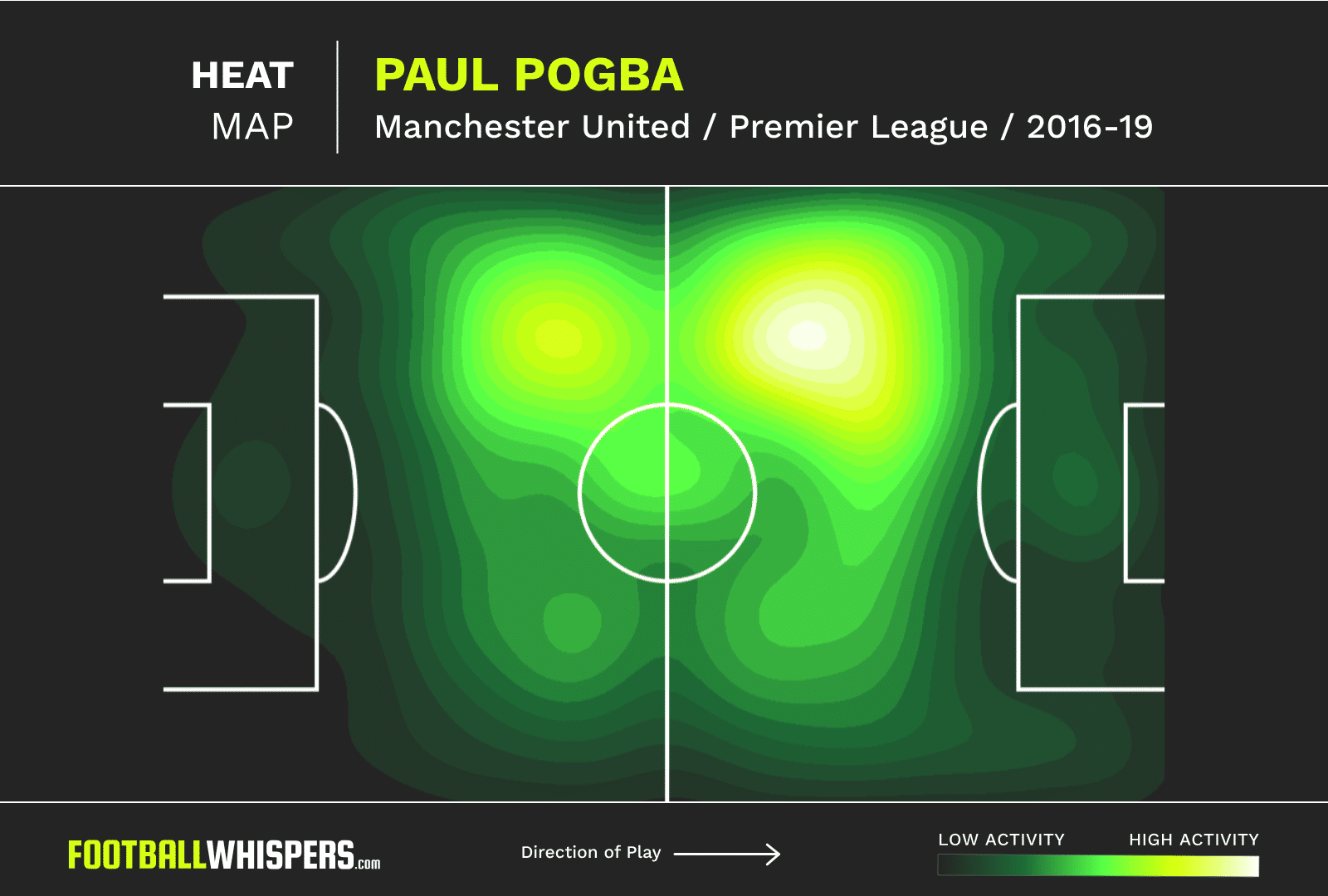 Returning to Juventus, then, wouldn't require any compromise on Sarri's behalf; a midfield three is guaranteed. Whether or not the famously flamboyant Pogba would fit the rigidity of so-called Sarriball is another matter altogether though.

With Pogba afforded something of a free role on the left, the player on the other side would need to show greater discipline to help anchor the midfield and guard against being overrun – perhaps creating a way to fit Pjanić and Rabiot into the same system. Pairing Ramsey and Pogba together would be a recipe for disaster. It would have to be one or the other.

Alternatively, the box-to-box dynamism of Emre Can could come to the fore. The German international struggled to make much of an impact at the Allianz Stadium in his maiden campaign, at least in part thanks to injury, but his capacity to get about the field would allow Pogba to do Pogba things with the shackles off.

It's a headache for Sarri, but it certainly beats rotating between Ross Barkley and Mateo Kovačić…